Ever wondered how the Tata Group managed to build such great recognition and brand value for itself? The Tata Group is one of the oldest and largest industrial groups in India. It is known for its long-standing brand image and consumer trust.

The goal of this case study is to deep dive into the marketing strategy of Tata Group, by taking a look at their marketing mix, competitors, product mix, marketing campaigns, social media presence, etc, and conducting a thorough analysis. Let’s get started by getting to know the company better. 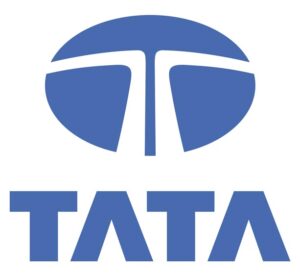 The Tata group that started as a trading company in 1868 by Jamshedji Tata with just an initial capital of Rs.21000 has now become a huge multinational conglomerate operating in over 100 countries across 6 continents.

Headquartered in Mumbai, Maharastra the company follows a decentralised pattern and owns 30 companies that function without any interference and with full autonomy in various sectors.

The company emphasises on improving the standard of living of all the consumers and building customer trust along the way. It was one of the first companies in its time to have introduced employee initiatives to generate employment for people under British rule.

The group believes in the Parsi legend ‘humata hukhta hvarshta’ which means good thoughts, good words and good deeds. It adds value to society through the establishment of various trusts and institutes over the years.  Being one of the largest contributors to India’s GDP, the company added about 4 percent to the country’s GDP in 2018.

The Marketing Mix of a company provides the complete outline of its marketing plans and strategies and is thus imperative in understanding its core marketing efforts. We will now, hence, take a look at Tata group’s marketing mix.

The Tata Group owns 30 companies that offer services to customers in a variety of sectors. This comprises the group’s product mix. Each enterprise operates under its separate board of directors and is free from the supervision of Tata Sons, the principal investment holding company. It functions under the following sectors:

Tata Steel: It is one of the largest steel producers in India with a production capacity of 33 Million Tonnes Per Annum.

The above list includes all the major sectors in which the Tata group specialises.

Since Tata Group consists of various subsidiaries, each subsidiary follows its own pricing strategy for the products and services provided by them. However, as a whole, the Tata Group follows a differential pricing strategy. Being a multinational conglomerate, it enjoys the benefit of charging different prices from different consumers based on geographical location, age, gender, etc.

Such a strategy enables the group to maximize its profit and maintain a market capitalization of over Rs. 12 Trillion (as of Feb 2020.) The company also makes use of penetration pricing under which they set a price lower than the industry trend to penetrate the market and gain acceptance from the customers. This strategy enables them to secure a large market share and build a favourable image in the eyes of the general public.

The Tata Group is present in over 100 countries across 6 continents. It occupies a huge global market that requires an extensive place and distribution strategy. It adapted to the technological shift effectively in the 2000s. It not only follows the physical channels of distribution under which it makes the products and services directly available to the consumers but also provides them through online modes of sale such as websites.

The Tata Group has fully functional websites for different geographic regions all over the world. It promotes online shopping through its platform Tata Cliq and the sale of electronic products through the online platform Croma.

Let’s have a look at the promotional and advertising strategies of Tata Group.

Such strategies are launched with a dual objective of not only maximising reach but also staying ahead of their competitors in the market. Since the Tata Group has a lot of competitors, we’ll be analysing them in the next segment of this blog. 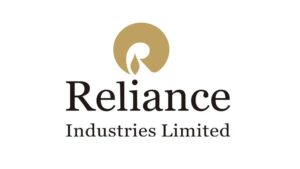 The Tata Group faces stiff competition from other multinational conglomerates. Their main competition is Mahindra and Mahindra, Reliance, Aditya Birla Group and Adani Group amongst many others. The sector-wise competition faced by Tata Group is as follows:

The strong brand portfolio of the Tata Group helps them to effectively counter this competition. It further helps them to enter new markets without much difficulty.

The Tata Group utilises influencer marketing to expand its audience. Under influencer marketing, a company collaborates with content creators who already have a large fan base and utilise their creativity to reach a new audience for themselves. Tata Capital, for example, hired a stand-up comedian, an online fitness coach and a tech teacher as a part of the #WeCountOnYou social media campaign. It encouraged people to share their positive lockdown stories to raise the morale of people and instill positive sentiments among the society. Another campaign was the #GetSetBolt campaign which made use of influencers which proved to be successful. It is discussed in detail later in the blog.

The Tata Group makes use of Google as well as Youtube advertisements to encourage customers to go to their website. Through Google Ads, they use a set of keywords to target that the customer is most likely to enter while using the search engine. This process aids them in increasing product awareness and attracting an interested audience. The use of Facebook advertisements including lead generation ads is also emphasised by the Tata Group. 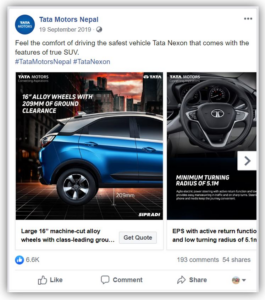 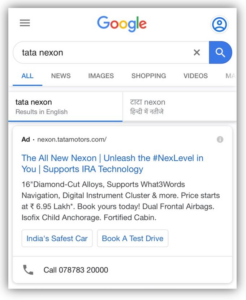 The Tata Group possesses a user-friendly website with interesting content which regularly attracts a wide audience for the company. Their website acts as a comprehensive one-stop destination, as it provides all the information to the user ranging from the history of the group, segment-wise functioning, new product launches, important business news as well as the job vacancies available. The increased responsiveness of their website helps them to stay on top of the search results implying efficient Search Engine Optimisation(SEO).

The Tata Group maintains social media accounts on all of the major social media platforms. Through their accounts, they focus on their rich history and reveal their developments as well as their plans for the future. Apart from focusing on their products, they portray their contribution to society through spreading awareness on topics like gender equality, malnutrition, clean water and sanitation, etc. and how the Tata Trusts work on solving these issues.

Instagram: The Tata Group amasses an army of 284,000 followers on Instagram. They make use of Instagram stories and posts to reveal new initiatives and innovative products to be launched. 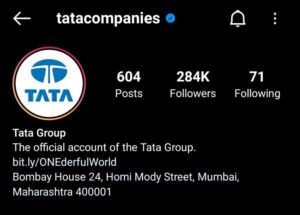 Twitter: The Tata Group has a total of 818,000 followers on Twitter. The reason for such a reach on Twitter is the innovative use of hashtags and organising of rewarding competitions. 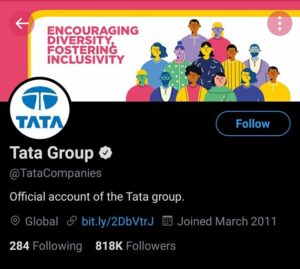 LinkedIn: The Tata Group possesses 835,000 followers on LinkedIn. The content uploaded on LinkedIn is mostly inspired by the content on the other social media platforms of Tata group. The reason for an increased reach is the brand value and recognition of the Tata Group which drives the youth to seek opportunities here. 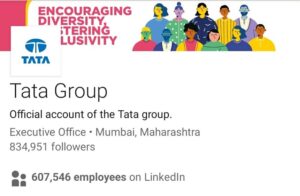 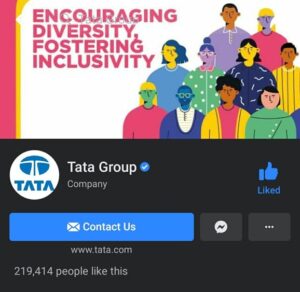 The Tata Group has undertaken various successful marketing campaigns over the years helping them to increase their reach and expand their consumer base. Let’s take a look at some of these campaigns: 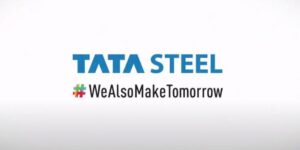 The tagline of the campaign helps recall the well-known line ‘We Also Make Steel’. The campaign was influential in emphasising the importance and the role of steel in the future. The campaign depicted the role that Tata Steel is playing in developing new and creative products for the future. It brought back the focus on the production of steel and made people realise the important contribution of Tata Steel. The futuristic approach adopted by the company was appreciated by the audience. 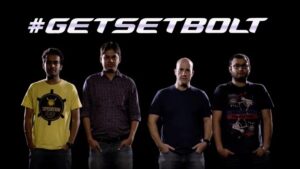 One of the most successful marketing campaigns of Tata Motors, this campaign was well received by the consumers, boosting Tata Bolt car sales. At a time when most of the companies were only using Facebook as their source of online marketing, Tata Motors used a more innovative and unconventional approach. They made use of a gamification strategy which was advertised through Twitter and Youtube. The campaign hired the services of four popular influencers and followed the theme of a reality show. The campaign helped create a buzz among the audience and a good brand image for the Tata Bolt hatchback. The campaign received over 1500 mentions on Twitter. 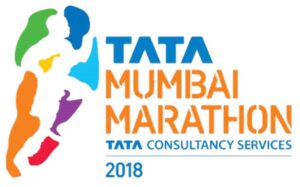 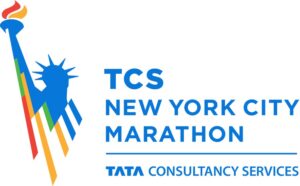 All of the above insights depict that the Tata Group is one of the top multinational conglomerates in the world and a force to be reckoned with. Being one of India’s largest private-sector employers, taxpayers, and earner of foreign exchange, the Tata Group is vital to the economy of the nation. The company has evolved with the times and heavily engages in leveraging technological advances to their benefit in their marketing efforts.

However, the Tata Group also faces its shortcomings in operations. Over the years, some of their marketing campaigns have been unsuccessful and they have failed to secure the desired market share in a few sectors. Amidst it all, the Tata Group continues to strive to improve and move forward in its approach and has proved to be a company of national importance.

Thank you for taking the time to read this blog! We hope you learned something new about the Tata Group’s marketing strategies and presence from this case study. If you wish to learn Digital Marketing, IIDE conducts free Digital Marketing MasterClasses every week, giving you a chance to upskill yourself digitally.

If you enjoyed reading the blog, kindly share it with your family and friends, leave a comment, and explore our other blogs!