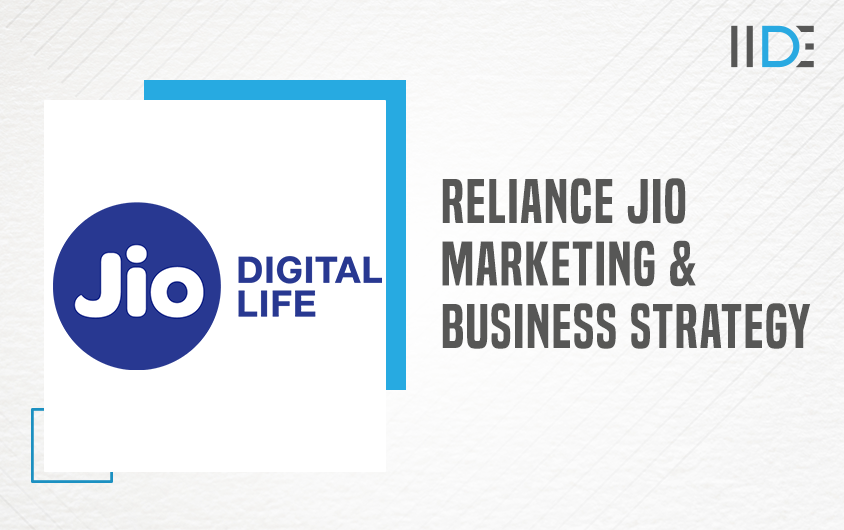 Reliance Jio is one of India’s largest network providers whose marketing and business strategy took the world by storm. It has played a significant impact on revolutionizing India’s digital ecosystem. Started operating in the year 2016 as a telecommunication provider, it gained more than 50 million subscribers in exactly 83 days of launch. Focused on providing India with the ability of the digital revolution – to attach everyone by providing the highest quality of connectivity at the most affordable price.

The following case study on Reliance Jio is prepared by Virtual Interns as a task during the internship period. We at IIDE believe in providing a real-world practical learning experience to our students so that they are industry-ready.

Now that you know about us, let’s continue this case study by understanding more about Jio as a company. 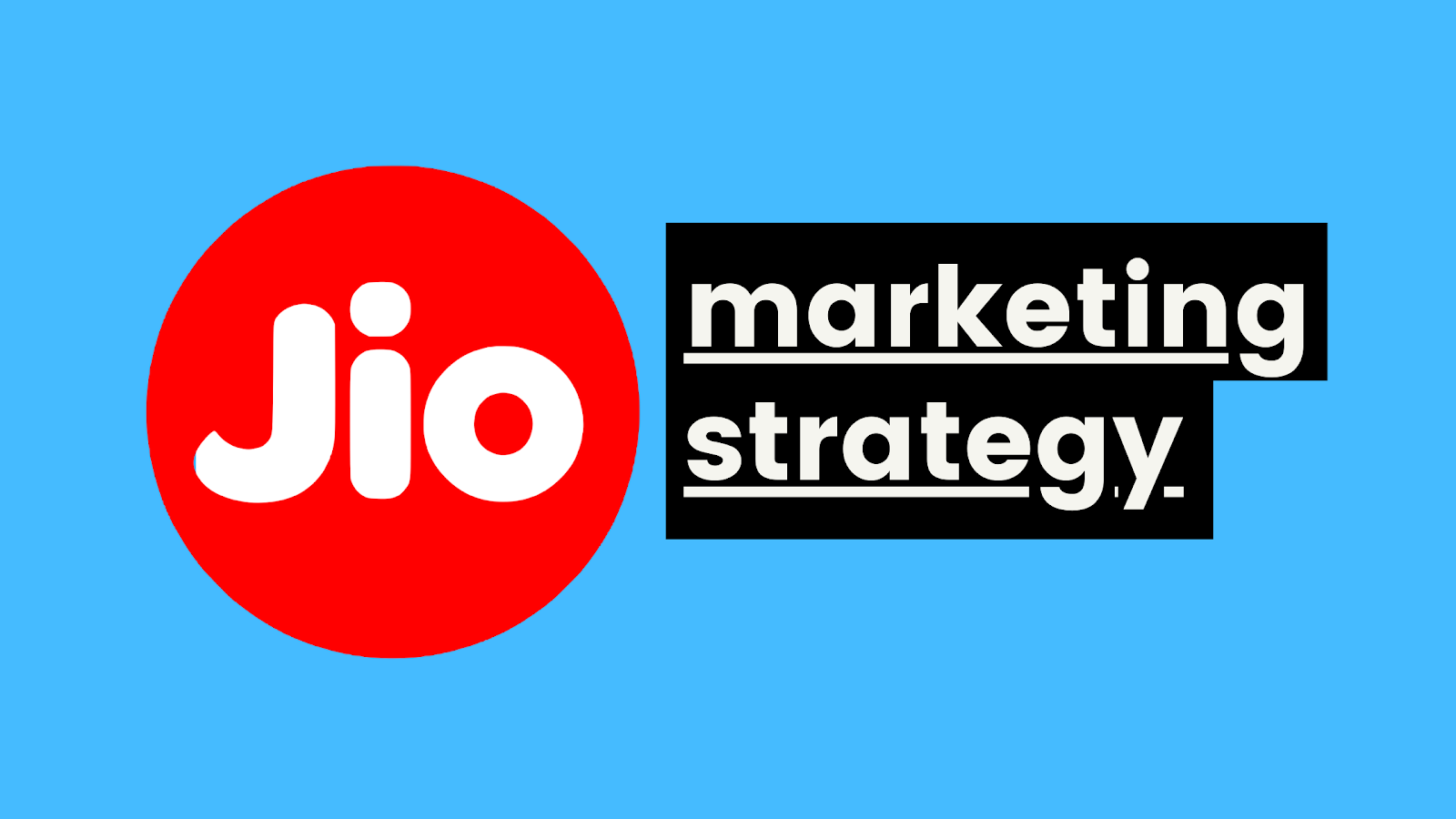 Reliance Jio Infocomm Limited popularly known as Jio is India’s largest telecommunication company, founded by Mukesh Ambani. The company was registered in the year 2007 as Infotel Broadband Services Limited (IBSL) and in the year 2010 Reliance Industries Limited bought a 95% stake in IBSL. After this IBSL was renamed to what we know as now Reliance Jio Infocomm Limited.

The company rolled out for a commercial launch in September 2016 and now has a full of a life subscriber base of 398.31 million as per the most recent report issued by TRAI (Telecom Regulatory Authority of India)

It is considered to have brought about a revolution in the digital world by providing the cheapest 4G data and free voice call plans. Jio has truly transformed the lives of millions of Indians.

Now that you know a thing or two about Jio, let’s now understand its competitors in the coming section. 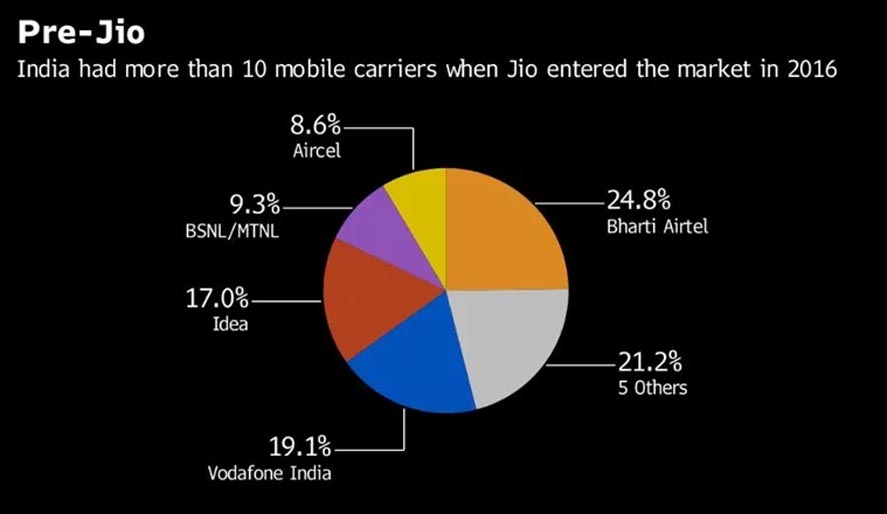 Before the rollout of Jio, there existed more than 10 Telecom companies in the industry but after its arrival, the whole scenario changed. Jio with its cut-throat pricing and latest technology swept away most of the telecom industries. Companies such as Aircel, MTS, Uninor(Telenor), etc, couldn’t survive at the pricing offered by Jio. The market was left with then stronger players such as Bharti Airtel, Vodafone India, and Idea who are now Jio’s competitors.

(Market Share of Telecom Industry as per Data by TRAI, September 2020)

As per a report by TRAI, September 2020, Reliance Jio dominated with 35% market share in terms of the total market share of subscribers, followed by Airtel and Vodafone-Idea (Vi) with 29% and 26% respectively. BSNL being a Public company was able to survive the competition and has a 10% market share.

A new market player suddenly dominated all the existing players and the whole scenario changed and this added to Jio’s advantage.

The business strategy of Reliance Jio is one of the biggest reasons for its success. The use of the AARRR strategy to penetrate the market adds huge growth to the company. This strategy includes 5 key components to help a business acquire and retain customers creatively and cost-effectively. 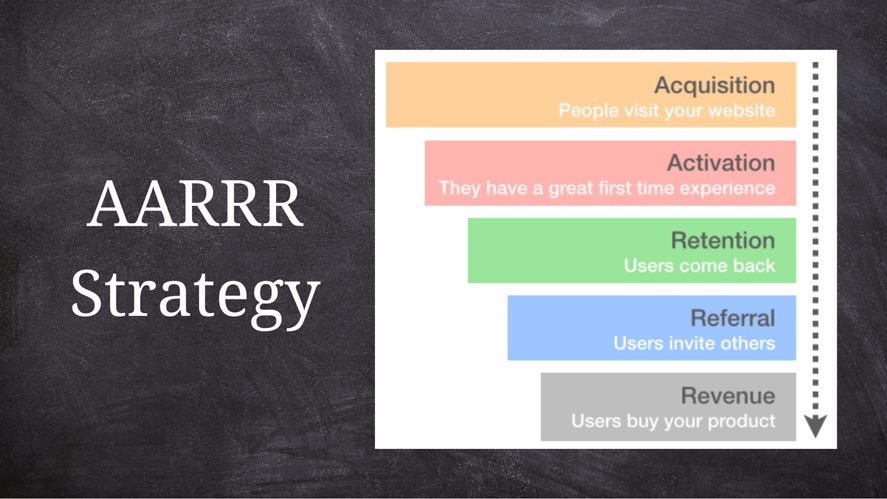 This is how Reliance Jio’s business strategy plays out and thus helping itself in being ahead of its competitors. Let’s now understand its target audience.

Reliance Jio paid interest in providing the best and cheapest Internet data services, so their target audience became the one’s having SmartPhone, looking for high-speed internet connection. Not only this they also created a demand for 4G enabled smartphones as their services could only be availed using that.

Not only is Jio targeting people using smartphones but also the industries which require the use of digital technology. Bridging gap between customer merchants and the final consumer. 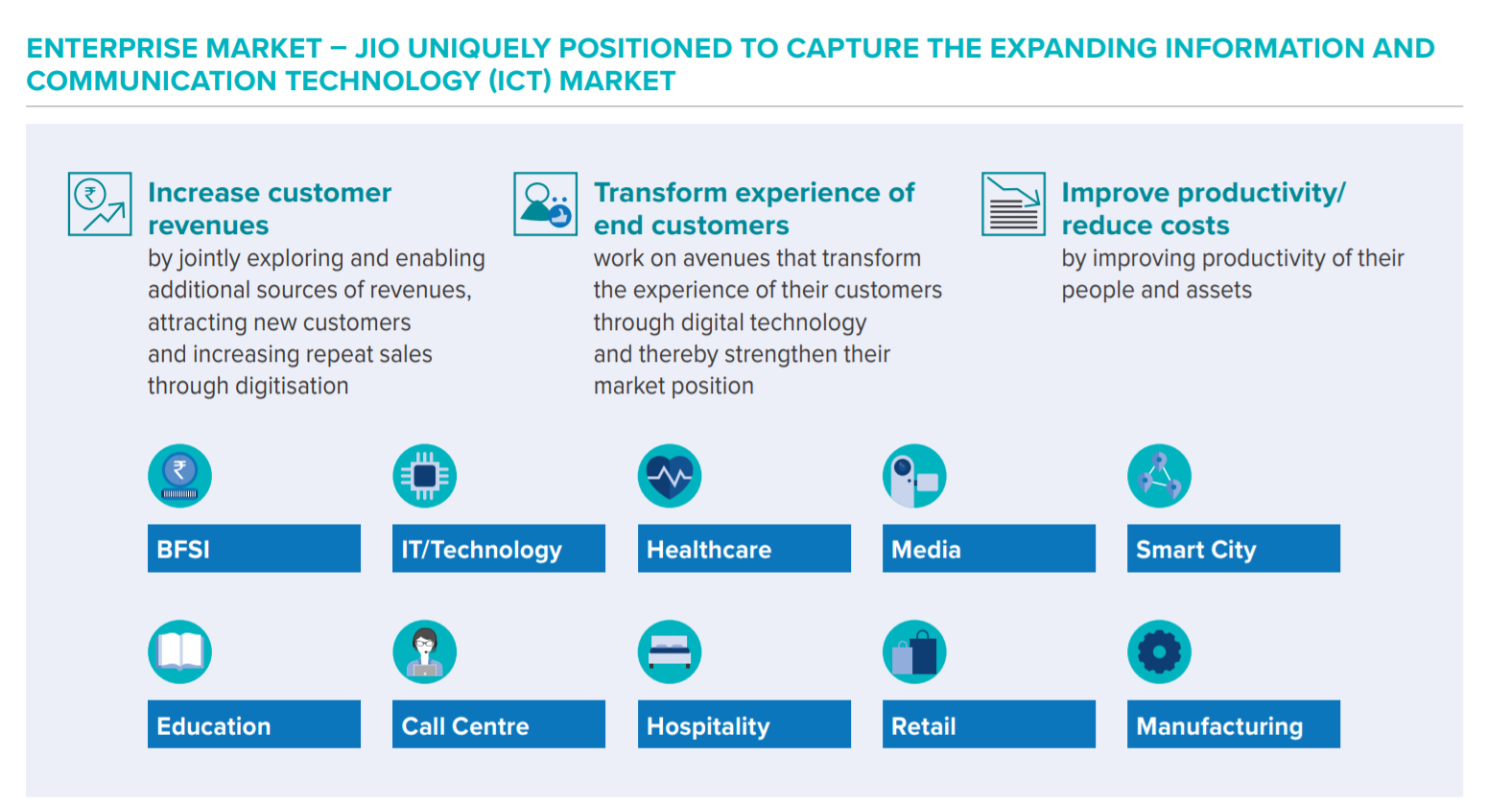 Jio’s plan is uniquely devised to capture any industry which requires the use of technology. Some specific industries include Education, Healthcare, Media and many more. 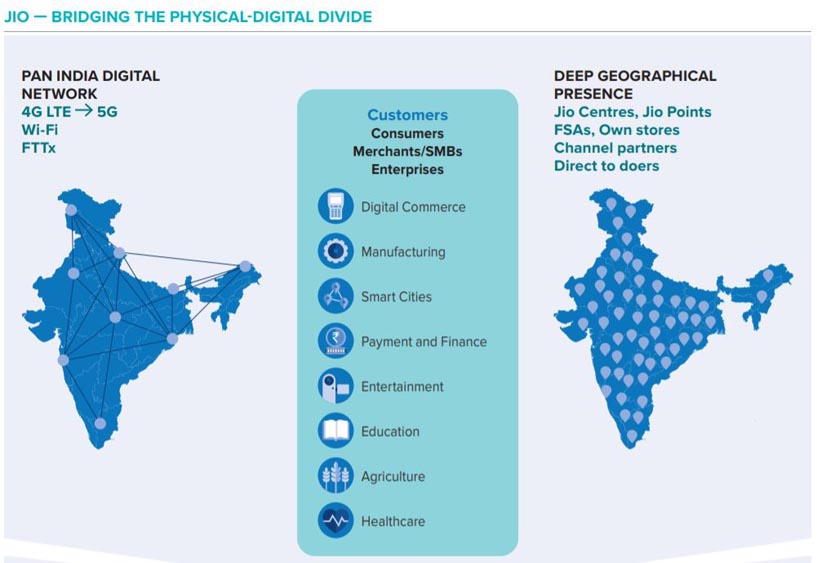 Let us now understand how Jio plays its social marketing strategies to create a space in the minds of the youth and other age groups in general.

Reliance Jio has a fantastic digital marketing presence across most platforms, all due to its brilliant strategy and trendy campaigns. It has garnered over 960k followers on Instagram alone. Moreover, also has a dominating presence on YouTube with 2.36 million subscribers which have their advertisement campaigns even in regional languages. It also has an active presence on Facebook with 2.5 million followers. On Twitter, they have about 666k followers which are way lesser than its strongest competitor. Overall, Youtube and Facebook is their strength but their twitter needs more improvement.

Reliance Jio has an impressive digital strategy in place. It is now time for us to dig deep and understand Jio’s digital marketing and social media strategy.

Reliance Jio faces a tough blow when it comes to Twitter. Airtel India, its biggest rival has a strong presence with close to 1.2 million followers on Twitter. Recently in the year 2019 when Jio asked its customer to pay charges for calling, Airtel trolled Jio using #AbTohSahiChuno which went viral. With more than 110k views, 3.2k retweets it was trending on Twitter. 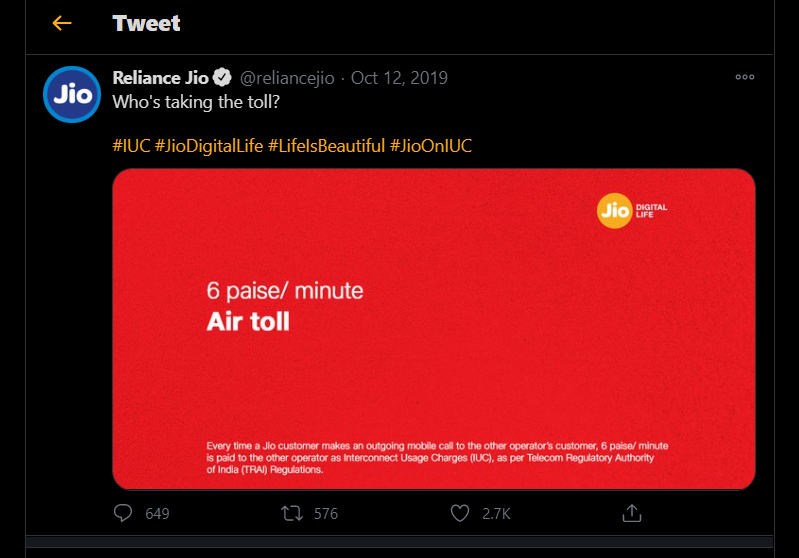 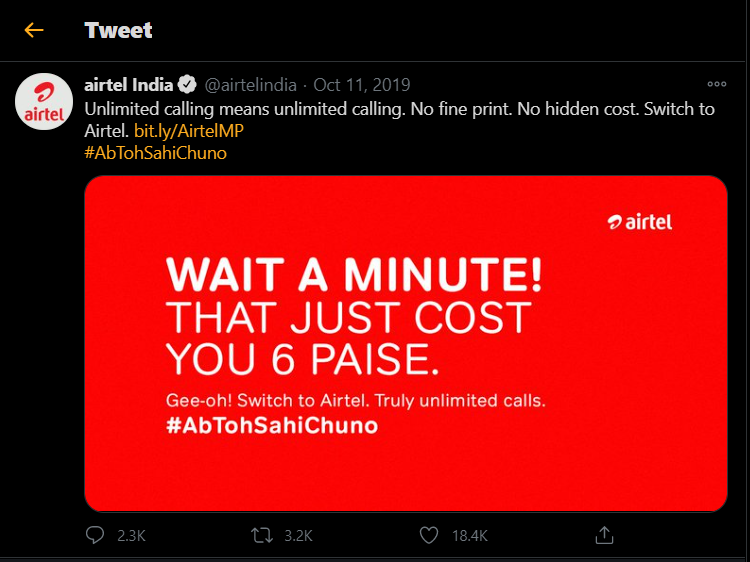 (Both Airtel India and Reliance Jio trolling each other)

Reliance has been the center of attention for the last few years due to its innovative ad campaigns. These campaigns ran across all mass mediums and swayed our interests toward Jio’s meteoric rise and cut-throat prices. Let us take a look at some of the most memorable campaigns.

Reliance Jio came up with an interesting campaign of providing SIM Cards home-delivered to the customers. Customers didn’t have to take the pain to visit a physical store to get their SIM Card.

With this campaign, Jio reached more than 26 million prospective customers in just 20 weeks. The Click- Through Rate (ratio of no. of clicks on a particular link to the total views on the particular medium where the link is published) of 0.72% on this campaign was three times that of the usual received by the industry. With almost 30,000 leads per day, Jio’s set a very high standard.

Overall, the campaign was a big hit.

Reliance Jio never missed on leaping when it comes to any active participation of India in sports. “Jio Cheers Cricket” campaign was rolled out to increase the hype of the India-Pakistan Match. The campaign was integrated using the Thunderclap tool which enabled it to reach a massive audience. For more engagement, Jio pushed notification engagement to their subscribers soon #JioforIndia started trending on Facebook and Twitter. 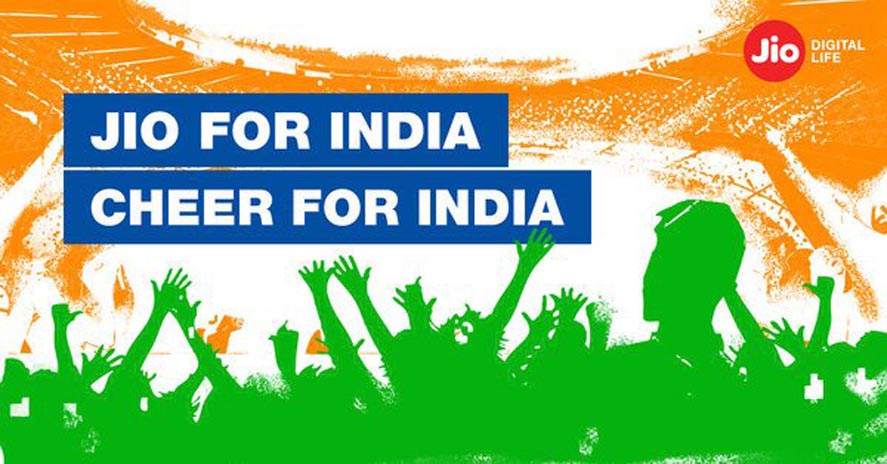 Jio became the first-ever brand in India to do such a thing in such a volume. The response to this scale was quite overwhelming.

In India, cricket is one of the most popular games. Jio understands the depth of the fans invested in sponsoring teams in the Indian Premier League. Knowing the interest and craze for cricket, Jio devises a way to engage all the cricket lovers to answer the outcome of each ball played in the live cricket match and win prizes every day. 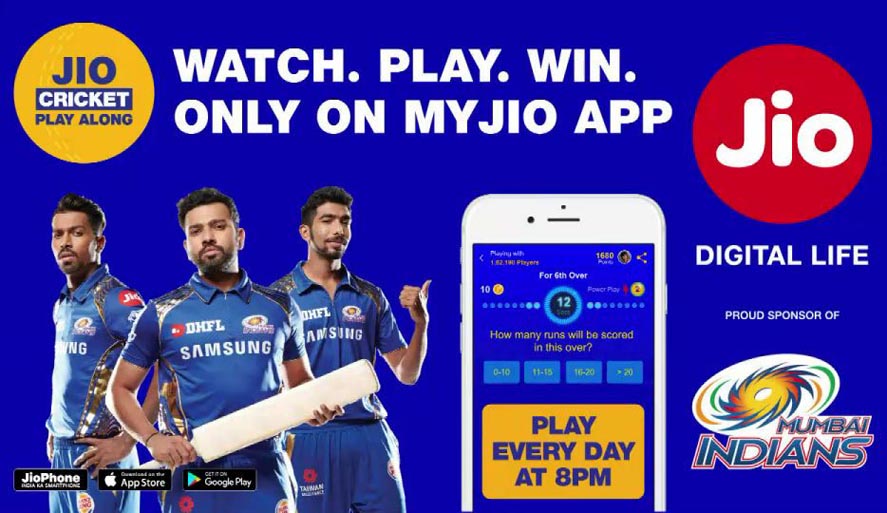 These are the strategies that Jio implements to create and establish a strong presence in the minds of customers which results in consumers developing a sense of trust element in the company.

The market entry “strategy” did not work out well, as expectations were high for Reliance Jio due to its late entry and on the other hand Breaking established and strong opponents like Airtel and Vodafone with descriptive technology grounded into the hearts of customers was not less than a “herculean task”.

Withdrawal of free services brought a downfall in its users. The decline of the customer base for Reliance Jio in 2019 was mainly due to the start of charging customers for voice calls. According to TRAI, there were almost 87 million inactive users. Anyhow now it has offered a free voice call around domestic places.

In December 2019 Reliance Jio made a joint venture with JioMart.

JioMart is an Indian online grocery delivery service. A joint venture means two individual firms join together to gain positive synergy. Hence both advantages and disadvantages are supposed to be faced by both firms.

The customers expect different things from joint ventures and when the level of expertise is not met with the investment it eventually brings downfall with an increase in disappointments. The JioMart customer faced issues relating to a dissatisfied customer base, quality of the product, and prepaid orders but not delivered leaving a bad impression when addressed over a social platform like Twitter.

If you want to know more about Jio and discover things you didn’t know about your telecom operator- Reliance Jio, then we suggest you check out this video to gain an understanding of how Jio become one of the top telecom operators in India.

With this our case study comes to an end, so now let us go through a quick conclusion.

Reliance Jio has a strong presence in the telecom market and shows no sign of bowing down to its competition any time soon. The expansionary and the growth marketing strategy enabled Jio to gain such dominance. Furthermore, Jio’s entry into various newer projects such as Jio Fiber, Jio Postpaid, will lead to a diversified and stronger control over the market share held by Jio, which is already more than 35%.

Jio has done a great implementation of its influencer strategy as well as its partnership with famous brands. Overall, Reliance Jio has made the greatest impact on bringing about the digital revolution in India.

With the digital revolution at hand, IIDE helps in training their students to solve business problems effectively and efficiently, using the modern techniques and ways of digital marketing. If you want to learn to create such practical and business-driven solutions, explore our course offerings and start your journey today.

If you’re interested in learning more about digital marketing, you can check out our Free Digital Marketing Basics Masterclass by Karan Shah, IIDE’s Founder and CEO.

Thank you for reading this case study! We hope you find it interesting, would love it if you can spare some time sharing your view on it. If you would like to know more about us drop your email in the comment section and we will revert to you.