YouTube is the world’s second most visited website and the most popular free online video platform, founded in 2005 by Jawed Karim, Steve Chen, and Chad Hurley. It began as a dating site, but it quickly expanded to include general video content.

In this case study, we’ll take a look at the Marketing Strategy of YouTube, which includes its marketing mix, digital presence, competitor analysis, and SWOT analysis. So, without further ado, let’s get to know YouTube as a company.

YouTube is an American online video sharing and social media platform founded in February 2005 by Steve Chen, Chad Hurley, and Jawed Karim. Every day, its users watch more than one billion hours of video. YouTube content creators, also known as YouTubers, upload more than 500 hours of content per minute.

Google paid $1.65 billion for YouTube in October 2006.  Since then, it has grown from a small video streaming platform to a large service that influences popular culture, internet trends, and the creation of multimillionaire celebrities.

With over one billion monthly users, YouTube is the second most visited website in the world after Google.  Google’s ownership of YouTube has also altered the company’s business model; it no longer generates revenue solely from advertisements.

The Marketing Strategy of YouTube is responsible for the majority of its success. Marketing is one of the most important functions of a business because it engages in promotion and marketing activities such as market research and advertising for products or services; this is especially true in today’s context where marketing innovation has accelerated exponentially and adoption of these techniques can be a make or break factor for businesses.

Let us look into the Marketing Mix of YouTube which is the foundation for its Marketing Strategy.

The marketing mix is the set of actions, or tactics, that a company employs to market its brand or product. This is a detailed examination of YouTube‘s marketing mix. It investigates YouTube‘s 4Ps (Product, Price, Place and Promotion) and explains how it has used these marketing techniques to convey its message to customers.

This demonstrates how differentiated YouTube‘s products are, for example, YouTube Kids is an app for kids to have fun in a safer and more contained environment. YouTube also has a recommended videos service that assists users in discovering the videos they enjoy.

Anyone can access YouTube for free. This has been one of the most important factors in the company’s success. However, not all services are provided for free! YouTube TV, for example, costs $64.99 per month and includes 6 accounts. It has over 85 top channels of entertainment, news, live sports, and more, and programs can be recorded without worrying about storage limitations. 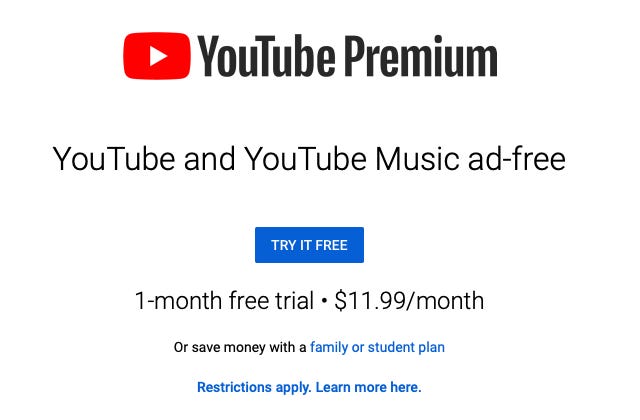 YouTube‘s pricing strategy has been very effective, combining both free and paid services.

YouTube advertising is also inexpensive. Most businesses begin with YouTube as their advertising platform, spending around £6 per day on local campaigns. YouTube typically charges advertisers only when people watch their ads or engage in some way, such as clicking on a call-to-action overlay.

YouTube is available on all smart devices and major browsers; however, mobile devices account for 70% of all watch time. It has been localized in over 100 countries, and viewers can watch its shows in 80 different languages (YouTube, 2020).

However, it should be noted that YouTube is not available in all countries. Similarly, it occasionally bans some YouTubers for violating its online terms of service and removes their content from the platform.

One of the most important drivers of YouTube‘s global growth has been word of mouth. Every minute, approximately 500 hours of videos are uploaded, and millions of people watch and share them. This spreads the name of YouTube from one end of the globe to the other.

YouTube also employs sales promotion strategies. For example, to entice advertisers to use its platform for digital marketing, it frequently offers $100 in free credit for every $50 spent on video ads.

Now that we have seen the brand’s marketing mix, let us analyze its competitors.

In marketing and strategic management, competitors analysis is an assessment of the strengths and weaknesses of current and potential competitors. This analysis provides a strategic context for identifying opportunities and threats from both an offensive and defensive standpoint.

Vimeo, the online video sharing platform with 150 million creators worldwide, is YouTube‘s main competitor. YouTube is the market leader in the online video market, with 2 billion registered users and $15 billion in advertising revenue.

So, without further ado let’s take a look at the top competitors of YouTube.

Vimeo is an online video-sharing platform owned by the InterActive Corp (IAC) group. It was founded in 2004 by filmmakers Jake Lodwick and Zach Klein who wanted to create an easy and fun way for their friends to share videos. Today, it is the meeting place for 150 million video creators worldwide, has 1.24 million subscribers, and generated $ 160 million in revenue in 2018 with a total of 8,700 employees.

The service is free to use and does not include advertising. It also includes options to share, store, and comment on videos, as well as a social network. Their revenue is generated by monthly and annual subscriptions that users pay in exchange for cloud-based services that allow them to create, host, stream, monetize, analyze, and distribute online content on various devices.

Dailymotion is a French website that allows users to upload and share videos. It is available in 25 languages and 43 localized versions worldwide. The platform was founded in 2005 by Benjamin Bejbaum and Oliver Poitrey and is now worth $128 million and generates $110 million in annual revenue. It currently has 300 million active users.

Dailymotion offers benefits such as advanced algorithm-based recommendations and the ability to discover sports, music, politics, fashion, and eSports content from around the world. The integrated player has been used to watch over 3.5 billion videos. All users are free to share their videos, and the platform provides creators with innovative technology resources, great flexibility, and visibility.

Twitch is an American platform that specializes in a video game and eSports content. It was founded in 2011 by Justin.tv and was purchased by Amazon for $1 billion in 2014. It generated $ 230 million in revenue in 2019 with 1,500 employees. It has three business units: subscription service, advertising, and the sale of “bits,” which users use to tip, share emoticons with friends, and cheer on their favourite streamers.

Every month, 3.2 million users broadcast live, and there is also a library of 124 million clips available on demand. It is the most popular video service among fans of eSports and video games.

So, let’s now get into the digital presence segment of YouTube in the section below.

Customers can easily browse through your portfolio if you have a digital presence. It allows you to interact with your customers while keeping you ahead of the competition. YouTube relies on social media platforms too. Let’s take a look at them. 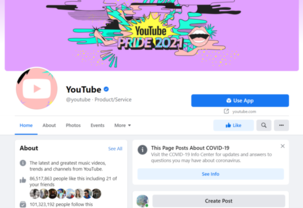 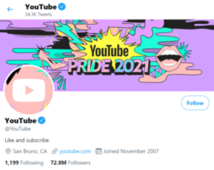 So, now that we’ve seen a glimpse of YouTube‘s digital presence and activities, let’s take a look at its SWOT analysis.

A SWOT analysis is a model that helps to identify the strengths, weaknesses, opportunities, and threats of a company. Its primary goal is to assist organizations in developing a comprehensive understanding of all the factors involved in making a business decision.

Let’s take a look at YouTube‘s SWOT analysis below:

Due to an excellent marketing strategy, marketing mix, competitor analysis, digital presence, and SWOT analysis, the brand has been able to remain at the top of its game, and with this, we have concluded the case study on the Marketing Strategy of YouTube.

YouTube is one of the most well-known companies in its field. YouTube was founded during the internet’s peak popularity, and it was later acquired by Google. When Google began marketing YouTube, the website’s traffic skyrocketed, and it is now one of the world’s largest websites. While there are numerous video-sharing platforms on the market, most brands and customers rely on YouTube as their primary content distribution channel for matched pre-rolls and branded content. Building a business on the YouTube platform has largely allowed brands and customers to enjoy a relatively large degree of freedom while operating in a well-established and relatively stable environment.

Please let us know what you think about this case study on the Marketing Strategy of Youtube in the comments section below. Thank you for reading, and if you enjoyed it, please share it with your friends and family.