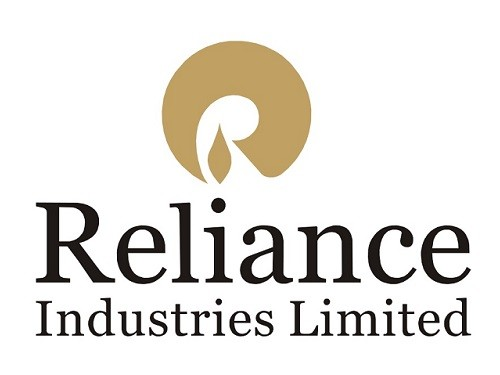 In this case study, we would go through the marketing strategies of one of the most successful companies of India and it’s none other than Reliance Industries Limited.

In 1960, Dhirubhai Ambani formed Reliance Industries Limited in Mumbai, Maharashtra with a dream of making it the largest company in India. Since then, the organisation has grown and diversified itself across different industries and sectors over all these years.

As of 2020, it is India’s largest private sector company and is ranked #96 on the list of Fortune 500 companies.

This case study focuses on Reliance Industries, Jio and its Retail business, along with their marketing mix, competitors analysis, marketing strategies and campaigns undertaken by them.

Let’s now get into the details by learning more about the company.

Reliance Industries Limited (RIL) is one of India’s largest conglomerates, currently headquartered in Mumbai, Maharashtra is run under the guidance of Mukesh Ambani, who is currently the Chairman and Managing Director (MD) of the company.

It has its presence in a variety of sectors such as Oil Refinery, Telecommunications, Textiles, Retail, Media & Entertainment, Financial Services and the Software sector. Given that it has a presence in various sectors, it has about 94 subsidiaries in total.

It is one of India’s most profitable companies and is known for its stints into exploring and expanding into new ventures. Reliance’s business culture can be summed up with its tagline “Growth is Life”.

It is also one of the companies that constantly work on Corporate Social Responsibility (CSR) to empower the lives of millions of people in India. In March 2012, the American Chemistry Council accredited Reliance Industries as a ‘Responsible Care Company’.

Reliance Industries Limited is slated as one of the key driving engines that will help India reach its GDP projections in the years to come.

Now that you know about the company, let’s start understanding its marketing efforts by first knowing its target audience.

Reliance Industries Limited caters to a wide range of consumers with its diverse range of goods and services ranging from oil-to-telecom, and even more with its retail division serving another dynamic set of customers.

Let us just take an example of Reliance Retail itself, retail goods such as apparels and groceries are a basic necessity so here it attracts all kinds of customers.

In the case of Reliance Jio, The segment that Jio has concentrated upon are people with smartphones looking for high-speed internet and good mobile services.

So, Reliance Industries Limited has a wide target audience to serve. So let us understand how the company serves its offerings using the Marketing Mix Model.

Marketing Mix is a model that helps us understand a company based on its Product, Price, Place, Promotion. This model helps us in knowing what the company has to offer at what price, where it is going to sell and the steps taken to promote the products.

In Reliance Industries Limited’s case, it has launched a wide range of products, from petrochemicals to retail to healthcare, etc. but we will understand its main businesses in this model that are,

A product is nothing but a value-adding object or innovation or service which a company sells. 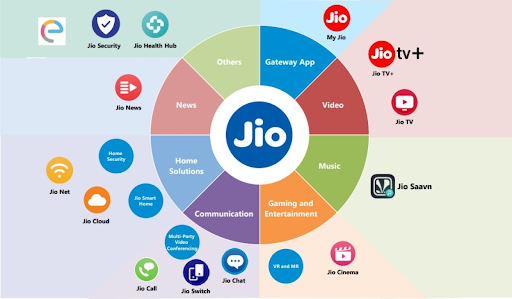 Reliance Retail is the largest retailer in India and it has spread its outlets all across India. 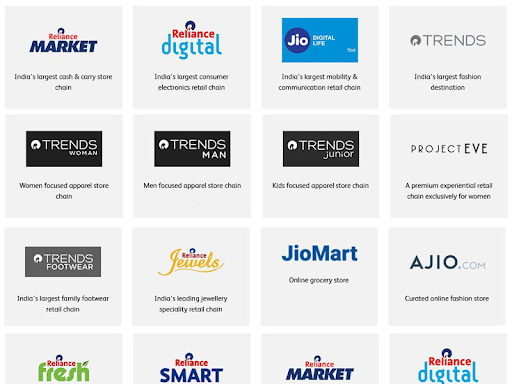 Price here means the price it charges for the products and services it offers.

In the telecommunication sector, Reliance Jio implements a cost-based pricing strategy. Cost-based pricing refers to offering affordable prices so that every individual can use its offerings

Place here refers to the place the actual selling of the products and services takes. The place where the customer can buy the products.

Promotion refers to the measures taken by the company to increase its product’s visibility and awareness so that customers can know about the products.

Now that you have an overall understanding of Reliance Industries Limited, what it offers to the customers, let’s take a look at what their competitors are up to in the next section.

To give your mind an idea of who Reliance’s competitors are, look at the image below. 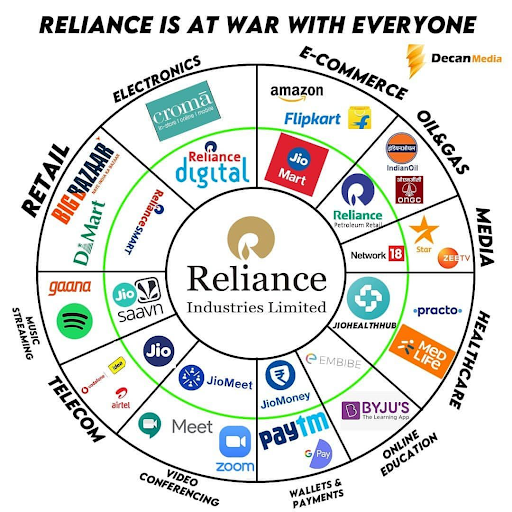 Yes, Reliance Industries is into so many categories that it is competing with Google with Jio Pay, Dmart with Reliance Retail, Embibe with Byju’s and many other players.

As we know the base of Reliance Industries Limited, on which it stands, is its O2C business as also most of the current revenue comes from here. it faces its competition with the below-mentioned companies.

So Reliance O2C ranges itself in categories such as Petrochemicals, Oil Refining and Oil exploration and Petroleum products it competes against a group of government entities like ONGC, BPCL and IOCL.

But what sets Reliance O2C apart is that it constantly reinvests its profit in making the process better whereas the Government being a majority holder of the companies like ONGC, BPCL and IOCL, takes out a hefty profit in its account as dividend every year. So this has created a wide gap between Reliance O2C and its competitors.

Reliance O2C kind of has a partial monopoly in the offerings it provides.

Reliance Jio is the fast-growing subsidiary of the conglomerate and has gained a good market share since it first launched back in 2016 by offering 4G services free of cost for a year.

So to conclude, Reliance Jio still has a healthy market share but Airtel has now emerged as an equally competitive candidate in terms of services and the experience offered.

Reliance Industries Limited has been focusing on the retail business for years now but in the last two to three years it has increased its focus on this segment. It has acquired a lot of retail companies and startups in the last two to three years and thus making its intentions clear of establishing itself as “The Retail Leader” just like it had done with Jio a few years ago.

Its primary competitors are Dmart, Amazon and Flipkart. However, all its competitors are working along the same lines of increasing their presence both online and offline either through acquisitions or through building things from scratch. 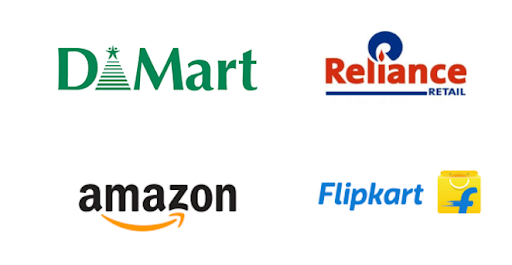 The Future Group which is acquired by Reliance Retail is under the scrutiny of the Supreme Court and the acquisition has been halted temporarily as Amazon has accused Future Group of violating an agreement previously agreed upon.

As it is an industry that is yet to establish thoroughly, only time will tell us whose efforts were appreciated by the customers.

Now with this, you have an idea about how the competition is folding out in the industry in general, let’s now understand the strategy that Reliance Industries Limited is implementing to place itself ahead of its competitors in the next section.

Marketing strategy helps companies achieve business objectives. There are several marketing strategies like product/service innovation, marketing investment, customer experience, etc. which have helped a brand grow and place itself better in the market.

So starting with Reliance Jio,

Jio advertises aggressively during prime time events such as IPL in India.

Jio has launched a new online portal called Jio Mart for home delivery of its products in collaboration with its sister company Reliance Retail.

Reliance Retail has recently started working aggressively to increase its presence in India. The company has launched Jio Mart that offers home delivery of products and services to its customers.

So this is how Reliance Industries’ marketing strategy is placed so that it can be one step ahead of its competitors. Let’s now go through the marketing campaigns undertaken by them in the next section.

Marketing campaigns are implemented to create a brand’s presence in the minds of customers and to build trust which directly results in better goodwill of the company and further word of mouth promotions of the company.

Jio uses Social Media, Television Ads, Print Media and an OTT (Over The Top) platform called Hotstar to advertise their campaigns. Of the famous campaigns, Reliance Jio had launched a long term campaign named Jio Dhan Dhana Dhan back in 2017. The campaign is still running as it’s a long term campaign that is updated year on year based on the new products and service launches of the company. 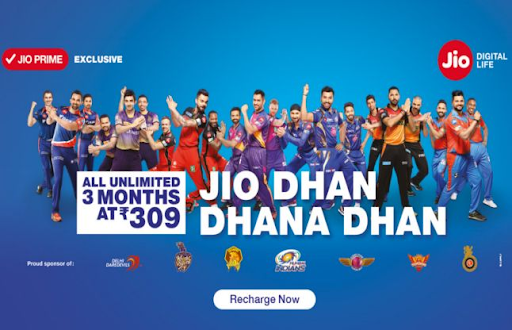 This campaign primarily focuses on targeting the youths and cricket fans of the country as they run this campaign around the start of the Indian Premier League (IPL) which is India’s premier domestic cricket competition.

Popular celebrities such as Shah Rukh Khan, Amitabh Bachhan, Deepika Padukone and Ranveer Singh are roped in as brand ambassadors for these campaigns. Jio has also partnered with a lot of IPL Teams and that also helps them use cricket players as their brand ambassadors.

Reliance Retail has increased its advertising volumes to capture the audience’s attention since the pandemic has begun. It is yet to unveil a proper long term marketing campaign just like its sister company Jio’s “Jio Dhan Dhana Dhan” campaign.

However, it releases topical and event-based advertisements during the festivals to create its presence in the minds of the consumers.

So to expand its retail business with full potential, Reliance Retail should come up with a long term campaign just like its sister company Reliance Jio has done. Maybe, the long term campaign is in the works or it might be halted for a moment temporarily until the Future group deal is cleared which only the time would tell us.

With this, we have come to the end of this case study. So let’s go through the quick conclusion of the same.

In all its market sectors, Reliance Industries Limited enjoys global leadership in its O2C business. With Jio being its fastest-growing business, it has all the proper marketing campaigns and strategies in place. However, Incase of Reliance Retail, it is yet to work out its marketing campaigns and strategies to ensure it operates on its maximum potential and thrives in offering customers a better experience with its products and services.

Let us know your thoughts in the comment section down below. Thank you for reading, and if you liked our then do share the blog in your circle.