Extensive SWOT Analysis of Airbus with Company Overview and Highlights 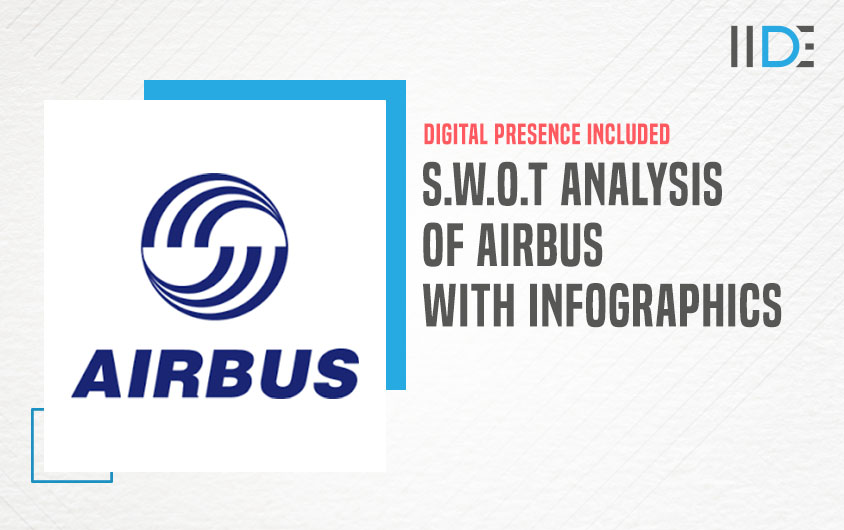 Airbus is a worldwide aerospace industry pioneer, with operations in commercial aeroplanes, helicopters, defence, and space. They are leading in the industry with their competent manufacturing, designing and delivery of aeroscopes.

The marketing efforts of Airbus have played an important role in the company’s position. One form of marketing that is extremely prominent and successful has moved online. If you want to stay up to date with current market trends, check out our Free MasterClass on Digital Marketing 101 taught by Karan Shah, the CEO and Founder of IIDE.

Before we dive into the SWOT Analysis of Airbus, let’s understand the company, its founding, finances, products and competitors.

Airbus is an international pioneer in the aerospace industry. Airbus is leading in manufacturing, designing, and delivering aerospace products, and on global scale services and solutions to customers The headquarters of Airbus are in Madrid, Spain, and Greater Toulouse, France.

Airbus is divided into three divisions  Commercial Aircraft (Airbus S.A.S.), Defence and Space, and Helicopters. In terms of turbine helicopter and revenue deliveries, Airbus is the biggest industry in the world.

On the 18th December 1970 about 50 years back Airbus was founded and the founders of this corporation are Roger Beteille, Felix Kracht, Henri Ziegler, and Franz Josef Strauss.

Following are the products and services provided by Airbus –

Airbus has reached the blah blah of many, however, it is not the only standing business in the industry. Following are the top competitors of Airbus –

Now that we have delved into Airbus’ core business and finance, let’s look into the SWOT Analysis of Airbus. 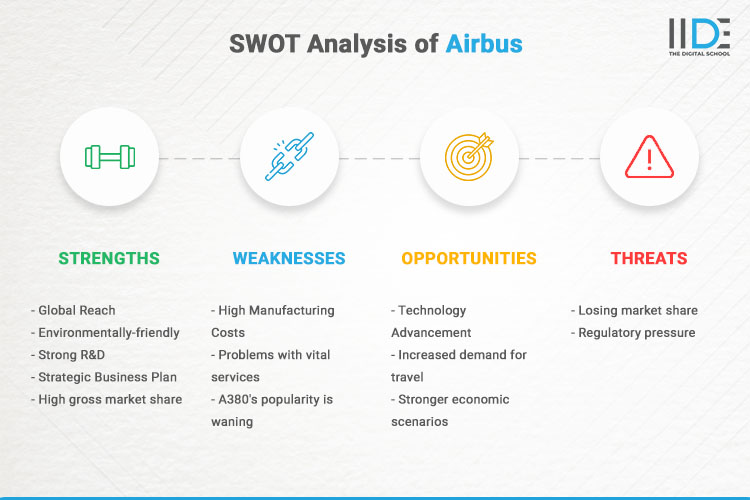 With this, we come to the conclusion of the SWOT Analysis of Airbus. In the next section, let’s briefly summarise the takeaways of this case study.

After the study of SWOT analysis of Airbus, we have concluded that Airbus is the world’s biggest aerospace company and still performing very well but delay in supplies, competitors, backlogs, and because of covid decline in sales are main challenges for Airbus which can create major problems for the company. Security hacking is also a major issue for Airbus, however, their strong r&d and its strategic business plan puts them in a further position compared to their market opponents.

Airbus has carved out a place for itself in the industry, and they’ve lately expanded their reach by being active on social media. Working in the marketing department of a prominent company like Airbus requires a thorough understanding of the Digital Marketing business.

IIDE’s short-term certification courses in a range of digital skills and expertise, such as social media marketing (SMM), search engine optimization (SEO), media strategy, and more, may get you up to speed in as little as five days.

If you enjoy the in-depth business SWOT analysis of Airbus, visit our IIDE Knowledge portal for more exciting case studies.

Thank you for taking the time to read this; please leave a comment below with your comments on the case study.