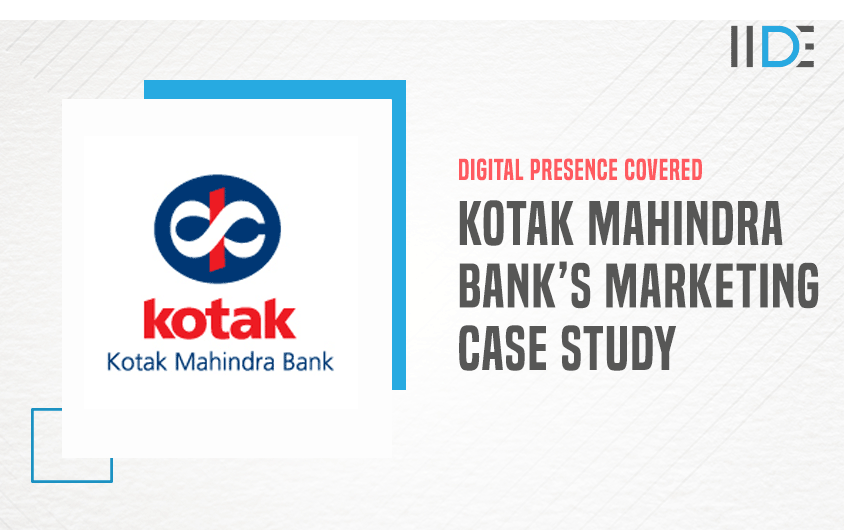 Kotak Mahindra Bank is a private sector bank headquartered in Mumbai Maharashtra. It is known as the fastest-growing bank in India. The following case study will cover the marketing mix, competitor analysis, social media presence, and its marketing campaigns.

Kotak Mahindra bank was founded by Uday Kotak in 1985 and later became an Indian financial services conglomerate. In 2003 it was given the license of carrying on banking business by the Reserve Bank of India. It was one of the non-banking finance companies which were converted into a bank. The company believes in giving a delightful experience to its customers and is regarded as one of the most trusted financial institutions today.

Now that we know about Kotak Mahindra bank, let’s learn about its marketing mix.

Marketing Mix of the Bank analyses the companies 4Ps which covers Product, Price, Place, Promotion and explains their marketing strategy. It explains what strategy is implemented by the company. So let us go over the 4Ps of Kotak Mahindra Bank in the coming section.

It offers a varied financial service to retail as well as corporate customers. It has a unique program that matches the needs of the customers. Following are some of the product services which the bank offers into different segments.

These are some of the products offered by Kotak Mahindra bank in various segments.

The company has a unique way of pricing because it depends upon both low and high rates depending upon the customer’s type and need of products or service. It also adopts an affordable pricing strategy that is useful for both corporates as well as customers. They also offer loans to the customers by charging them flexible EMI repayment.

Kotak Mahindra’s origin is present in Mumbai Maharashtra. It also has a global presence in countries like Singapore, Dubai, New York, and many other international countries. Its ATMs are spread all over India making it easy for the users. It offers service to many clients with its efficient workforce. Its distribution channel includes offices and franchises present in both urban and rural markets. 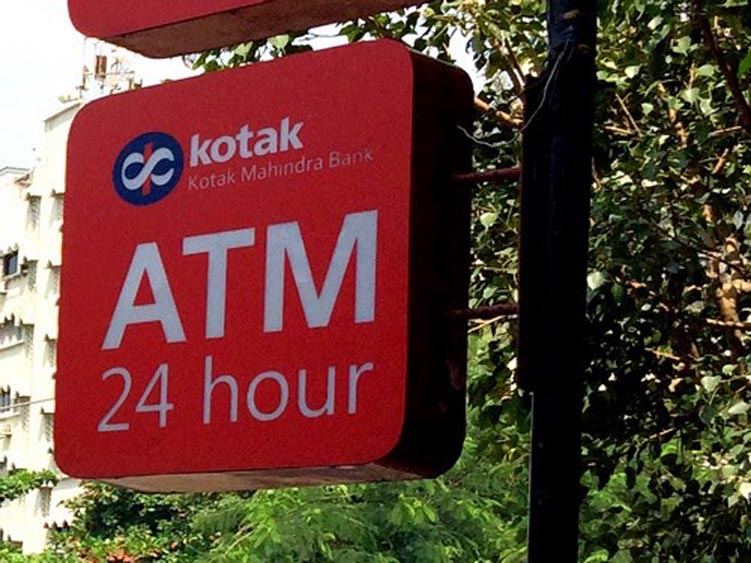 It offers feasible, convenient, options for its clients as their tagline says to make money simple. They turned twenty-five years old in 2010, on the occasion it launched a ‘youthful 25 years’ campaign. It had launched a ten-second high-impact television commercial and print advertisements. The campaign talked about how money can build self-esteem and provide security.

It was a quick ad but created a strong impact on the users. It promotes its firm through television channels, YouTube, radio, and many other platforms. They also try promoting through various hoardings which are set on popular places to grab user’s attention. It is also accessible through mobile phones as it launches its app called Kotak Bharat banking app.

Kotak Mahindra Bank is known as one of the leading banks of India. It faces huge competition in the market. One of the major competitions is from the first leading bank in India which is as follows.

Its chief competitors also include

Bandhan Bank is seen as one of the top competitors. HDFC is one of Kotak Mahindra’s top rivals as it is one of the largest private-sector banks in India.

Therefore, Kotak Mahindra bank has to be consistent and should come up with innovative schemes to beat its competitors.

Marketing Strategy is the process of making sure you are getting relevant messages out to customers in a way that would lead them to do something about your business, product or service. This can involve generating leads, nurturing them, and building long term relationships with these leads.

We all know that Kotak Mahindra Bank is in a sector that is already highly competitive. However, the bank has undertaken various measures and marketing activities to attract new customers and also maintain long term relationships with the existing ones. So let us see some of the marketing strategies implemented by Kotak Mahindra Bank

As one of the largest banks in India, Kotak Mahindra Bank saw an opportunity and offered a zero-balance digital bank account under the name, “Kotak 811” in March 2017. 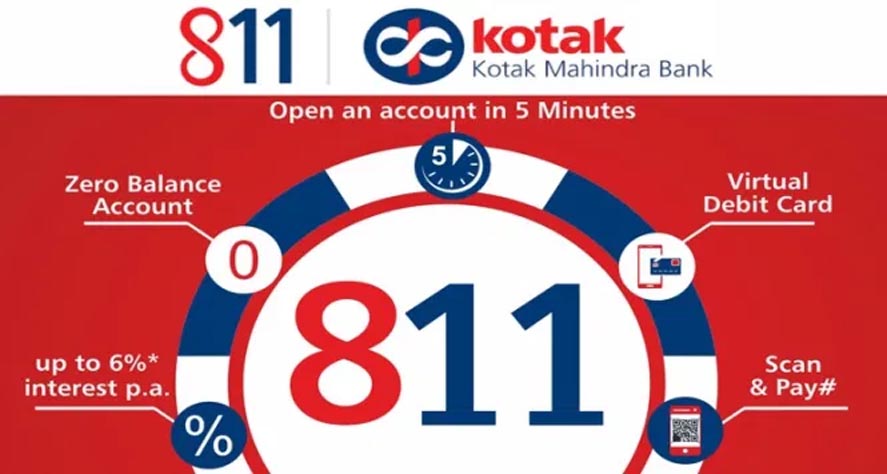 The process of opening 811 accounts was a five-minute task sitting at home since everything is done online. It also provided the Kotak 811 account holder with a virtual debit card.

With the Digital India initiative and UPIs on the rise, this strategy of Kotak Mahindra Bank helped it rake in millions of customers in less than a year’s time and it still continues to do so.

It is not just about business offerings but also about creating brand awareness. In the simplest terms, it’s the brand identity and awareness that people associate with the business. Without it, a business would be just another company fighting to survive in an overwhelmed market.

Here, brand ambassadors are the friends who can help a brand take its business to the next level by building healthy brand awareness and customer engagements.

Kotak Mahindra Bank has signed Ranveer Singh as its brand ambassador. It also had signed Vinay Pathak, as the brand mascot of the company. 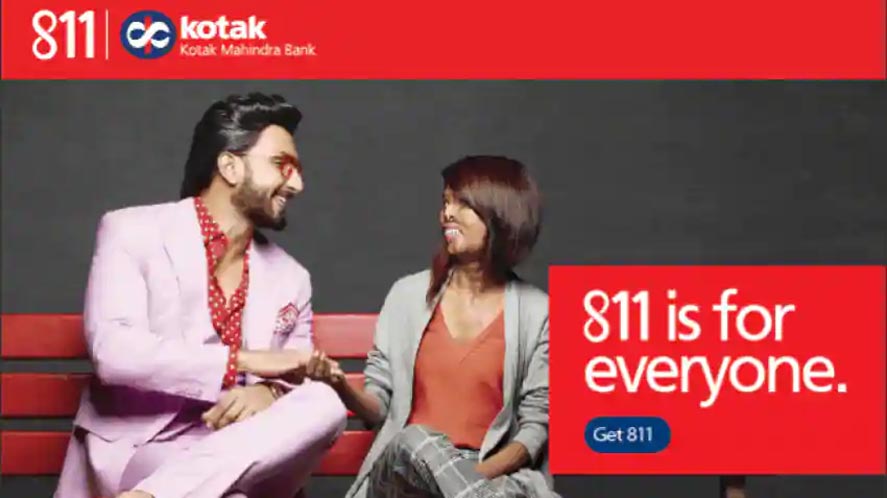 The bank has taken initiative to create brand awareness on various social media platforms. It promotes its bank through various marketing campaigns. It does aggressive marketing and thus ensures that the advertising attracts customers. Ranveer Singh is the brand ambassador of the bank. The agency creates such marketing campaigns through electronic, print, and digital mediums. Following are some of the marketing campaigns by Kotak Mahindra.

The company came up with the benefit of getting 6% on your savings account. It also rolled out various ads on these campaigns in the form of advertisement and print advertising.

This ad shows how Vinayak Patkar has been portrayed and he speaks about the financial decisions one needs to make in their life. In this ad campaign the bank came up with the Jifi zero balance hashtag banking campaign wherein they promoted through their service called Jifi saver through social media accounts.

The bank presented this opportunity with a wide distribution of networks as their ad name also portrays the same. This campaign highlighted that the Kotak Mahindra bank is also present in remote areas all over India having a huge presence.

These were some of the popular campaigns released by BPCL to promote its new offerings and services. Let us now understand what it is doing in terms of its digital presence in the next section.

After the successful campaign of Kona Kona Kotak, the bank came up with this ad campaign driving the message as time changes banking service also evolves.

Bank From Home – A Marketing Campaign of Kotak Mahindra Bank

In this ad campaign, the brand ambassador Ranveer Singh has been portrayed following is the image and youtube link for the ad.

Kotak took this opportunity during this Covid-19 time to deliver their customer’s service from home wherein they introduced zero contact video KYC 811 savings account urging users to #bank from home.

Therefore, with this, we come to the end of the marketing campaigns of Kotak. Now let us have a look further.

It has been a pioneer in the digital transformation space. Jifi and KayPay were a huge success for the bank. They were the first player in the banking industry to create a payment platform.

They launched KayPay which is an easy money transfer application that enables you to transfer money to your Facebook friends, both of them should have an account with Kotak.

Later they extended it to Google+. But now they have further increased their outreach. Today we can use Kay Pay with our email id or mobile number. Jifi is a new-age digital account that offers anytime access and on-the-go transactions. The product won many global innovation awards.

One of the digital products, Kotak Rewards was launched when they tapped into customer insight. They learned that customers are using eCommerce sites to shop. So they engaged with more than 100 large e-commerce merchants like Amazon, Flipkart, Myntra, eBay, and others to create a Kotak Reward Portal. They also launched a mobile store to integrate eCommerce with the mobile app.

Social media is rapidly growing and consumer interest plays a major role in it. Through social media, the bank will reach a larger segment which will help them create a huge awareness about various schemes and offers. Following is the social media presence of the bank.

Here, we see that the bank has a huge number of followers on various social media platforms thereby increasing its reach which will help them in the long run.

Therefore with this, we come to an end of the case study