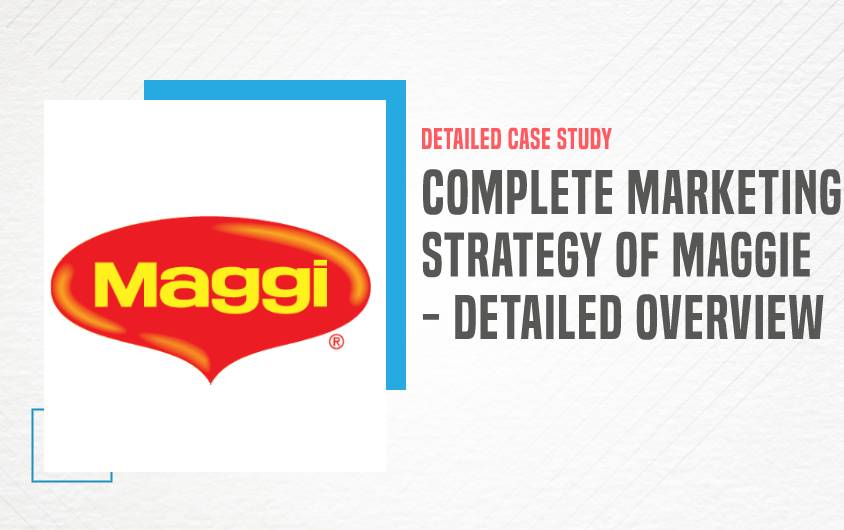 As India’s most favorite noodles that take only two minutes to cook when there is a time shortage for making a wholesome meal or just a quick snack to curb the cravings, the Maggi noodles are doubtlessly one of the most famous products.

Do you ever wonder what the secret is to such enormous success? If that’s the case, you’ve come to the correct place. We’ll look at the marketing strategy of Maggi, its target market, marketing tactics, campaigns, and ways of attracting new and existing customers in this case study. Also, if you want to read more case studies like this do check our other blogs.

So let’s begin by learning a little more about the company. Maggi is a product owned by Nestle India, one of the topmost leading fast food companies in the country. The various Maggi products are instant noodles, stocks, ketchup, and instant soups. The major products of Maggi are 2-minute Noodles, Maggi Masala-Ae-Magic, Maggi Sauces, Maggi Rice Mania, and Maggi Magic Cubes. It is a product of Nestle India, a subsidiary of Nestle of Switzerland. The different products of Maggi are manufactured in the seven extremely technologically advanced factories of Nestle India that are located in Tamil Nadu, Punjab, Karnataka, Goa, Uttarakhand, and Himachal Pradesh.

Maggi 2-Minute Masala Noodles is fortified with iron which will now provide customers 15 percent of their daily iron requirement.

MAGGI NOODLES is a segment of about 70 percent of urban households in India and with more than 2.5% Bio serves that are utilized by people every year, it can be an ideal carrier of iron fortification and thus contribute to filling the iron deficiency gap. With this objective, Maggi added Goodness of Iron in every packet.

Let’s start with the Maggi Marketing Strategy & Mix to get a better understanding of the company’s product, price, promotion, and distribution strategies:

Maggi is one of the leading food brands under the umbrella of Nestle. Maggi has a wide variety of products and has a variety of ranges for each country. Its products are majorly categorized into Maggi instant noodles, Sauce, Maggi soups, and Seasonings.

The instant noodles category has a vast variety and is very popular all across the globe. The major products in this category are 2-minute Noodles, Vegetable Multigrain Noodles, Chicken Noodles, Cuppa Mania, Oats Noodles, Hot Head Noodles, Atta Noodles. These variants are the backbone of the product strategy in the Maggi Marketing Mix. The Maggi Soups category has a vast variety of dehydrated soup mixes and products offered vary with countries. In India, it is available in Tomato Margherita, Corn with pepper, Green pea with coriander, etc. Maggi is present all across the world where it runs.

Maggi uses a Cost-based Pricing Strategy to tap into different markets in the world.

The competitive prices are repaid with a high volume of the products. This shows the cost and competition are the major factors in the marketing mix price strategy of MAGGI.

Because of rising prices in different countries, MAGGI has smartly started decreasing the quantity to keep the price unchanged. Nestle strives to capture a high market share with minimum prices and maximum quality standards. As Maggi is trying to tap into all segments of income factors, it keeps differential prices depending on the locations across countries. Also, its offering is available in a broad variety of packages so that people can buy according to their needs. Recently, Maggi has started coming up with fresh products like the Hot Head Noodles and Cup range which it targets for the higher income level segment and hence are priced at a higher range.

MAGGI products are broadly available due to the strong presence of Nestle. The strategy of distribution followed by Nestle is Producers to Distributors to Wholesalers to Retailers to Consumers. This is because it is consumed in a lot of volumes and commonly in small quantities. Due to its wide reach even into rural areas, it has gained it the top position.

Maggi products are taken from the factories directly which are individually managed to convey and forward agencies who then store in their warehouses and send them to the wholesalers. According to their demanded quantity. These quantities are then distributed among the retailers, other small businesses.

Maggi has used advertising as its major promotional strategy to create awareness. Initially, it is focused on kids and working women who have less time to prepare food. The advertisement mainly showed on kid’s channels with various effective taglines.

Maggi has also used the taglines of the “Miss You Maggi” ad campaign to regain back the lost consumer after the Maggi ban in India. As sales strategies over the years, it has attached different free goodies with its products such as fun books, toys, and free samples. Maggi also offered Scratch n Win Schemes and discounts. It also used many celebrities notably Madhuri Dixit for brand endorsements. This completes the Maggi Marketing Mix.

Nestle India recently launched an inveigle campaign in which Maggi lovers would get a chance to vote for their special favorite flavor. The new variants by Maggi such as Tomato, Chatpata, Yummy Caprica, and Desi Cheesy offer rotation to every enjoyable flavor profit yet manages to fire up the natural sense of familiarity among the consumers that Maggi has developed through its years of experience.

The Campaign has become even more interesting and exciting when it is coupled with this chance to vote for the favorite flavor, making the whole experience inclusive, invigorating as well as energizing. Maggi urges everyone to enjoy its new variations of flavors and to rate and vote for consumers’ special favorite ones among them, as Maggi always wishes to give their best to its customers.

Maggi is one famous brand of Nestle and has a major focus on developing and executing digital and social media initiatives. The brand adopts a sharp engagement strategy across its social media presence, holding upon the strengths of each platform to deliver its brand message and manage consumer engagement. The brand is engaging actively in social media platforms and is building a powerful digital presence to strengthen the brand MAGGI. Along with TV, the company is engaging with consumers via Twitter and Facebook. Digital and Social Media is a central focus of their brand-building process. 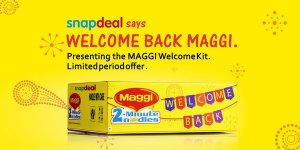 Digital acceleration team of the brand, which was responsible for the Maggi Campaign

“WE MISS YOU TOO”. It has also set up 24×7 toll-free customer services to address customer concerns. Maggi had a tie-up with one of the top famous e-commerce platforms ‘Snapdeal’ and came up with the Maggi welcome kit idea.

As we all know, Maggi has certainly been the topmost leading brand in the noodle industry for decades but there are many other brands as well which have given close competition to MAGGI in the past as well as in the present.

Below are the top 2 Maggi competitors:

Thus, it has tried to give itself a different positioning from the other competitors in the market and it is the only competitor of Maggi who has decided to head on while competing with it.

Maggi’s consistent quality, skill to identify the needs of society, and continued innovations have allowed it to grab 90%of market share today, in instant food products LOB. Maggi has continuously been broadening its product line, which leaves the so-called “ONE PRODUCT CONCENTRATED BRAND” behind. Maggi primarily sells instant noodles, sauces, soups, bouillons, and other culinary aids. Distinct markets have different preferences for different products.

Is this a blog that you enjoyed reading? Do you want to know more about it? Our  Free Masterclass on Digital Marketing Fundamentals is a wonderful place to start if you’re new to digital marketing.