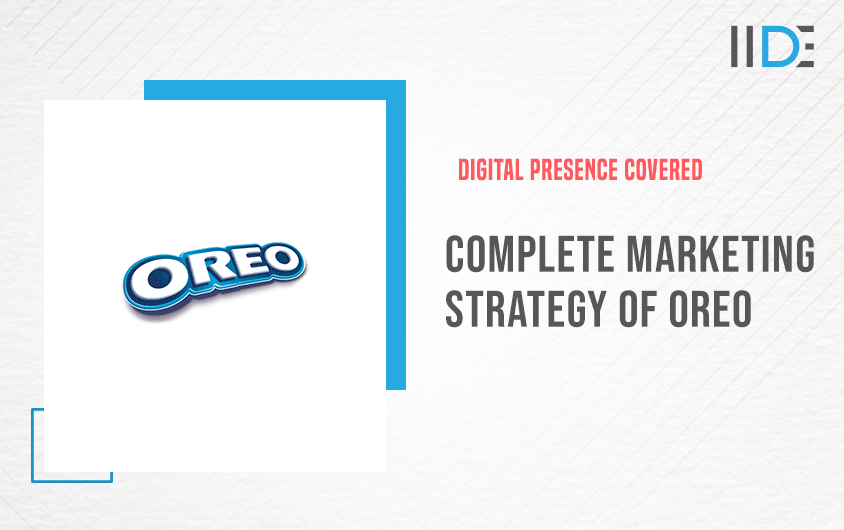 Oreo is one of the most famous cookies which is loved by almost everyone. In this case study, we will look into the marketing strategies used by Oreo to become one of the leading biscuit companies around the world.

So let’s get started with knowing about the company in brief:

Back in the year 1912, this biscuit was developed by the National Biscuit Company in New York. And in the year 2011, this biscuit was brought to the Indian Market by Cadbury India. Now it is having 6% of the market share in the biscuit segment, though it is quite costly as compared to other biscuits and is considered a luxurious biscuit in India.

Oreo is a sandwich cookie consisting of two wafers with a sweet crème filling of various flavours like chocolate, milk, red velvet, etc. The company sells its products in over one hundred countries with different packaging and limited edition offers.

As we have brief knowledge about the company, let’s dive into the marketing mix of Oreo.

A marketing mix is a comprehensive series of actions used by a company to introduce or promote its products. It includes 4Ps, Product, Place, Price & Promotion. It helps companies achieve business goals & objectives, and it is widely used to define strategies. Let’s see how Oreo is using its marketing mix.

Oreo is a leading biscuit brand and having a presence in various countries across the globe. One of the major products of Oreo is the Chocolate Sandwich. The product is also customized as per the target market. There are a lot of varieties available but not all the varieties are available at every location. Most of the Oreo Variants are available in the USA, in India, you can’t see much variety of flavors.

They are experimenting with flavours in India, recently they launched red velvet and chocolate-flavoured cookies, and are working on more varieties.

The packaging says a lot about the product because it attracts the customer to purchase it and the same has worked for Oreo very successfully. The packaging style of the company has played a significant role in increasing its popularity, and the design of various products of different varieties has attracted a large customer base for the company.

Oreo started its operations in Birmingham, UK and now it has covered different overseas markets like the United States, India, Ireland, Australia, Canada, and New Zealand.

It uses its parent company Mondelez’s distribution network for availing the product to its end consumers. As it has manufacturing facilities available at each of the continents for different products meeting the demands of the customer.

Oreo is doing great in the urban market as compared to the rural market. It follows the traditional method of distribution in which products are transferred from manufacturing units to distributors via the agents and then to retailers. In India, the channel through which each of these products is sold includes shopping malls, centres, mom and pops stores, retail outlets, etc.

Oreo uses a mid-premium pricing policy, it offers quality products and prices them at mid-range which has helped it to gain a loyal customer base.  In India initially, they opted for a lower marketing pricing strategy to gain a higher market share, but eventually, as they saw the popularity for the products increasing, they increased the pricing accordingly.

The Oreo-Cadbury partnership has launched rigorous marketing campaigns displaying creative and innovative themes with different activities to build a connection with the customers and leave a lasting impact on them.

The main target audience for the company is children and youth due to which it promotes on Tv and social media heavily, it has used every advertising tool like print media, visual media, and digital media,

The packing also helps the consumer in identifying the brand easily. Milk’s Favorite Cookie is one of the famous hook lines of Oreo. The company also participates and organizes different events to interact with the customers directly and believe strongly in community activities.

Now, let’s deep dive into the marketing strategy used by Oreo to become one of the leading cookie companies in the world.

Marketing Strategy is a complete plan of the company which defines how the brand will communicate with its target audience using several innovative strategies. It uses various offline and online ways to market itself and reach out to its customers.

Let’s have a look at them;

Its customized design attracts its customer especially kids and people who follow everything that’s in trend to buy the products which make it stand out from its competitors and builds a unique image. 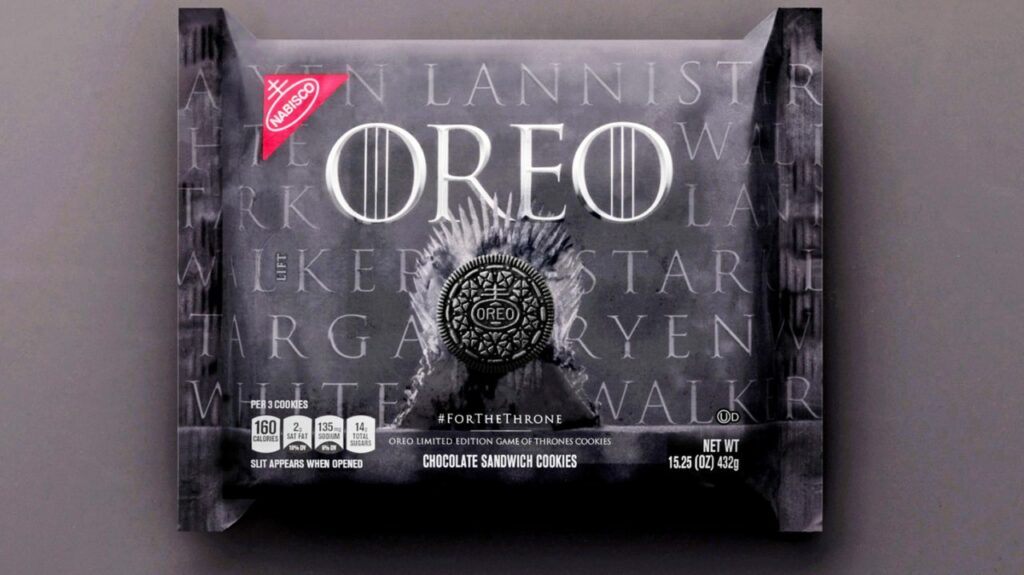 Such meaningful and creative marketing ad campaigns of the company are a major reason for its success in the industry.

Initially, as it was available at a nominal price, people didn’t mind trying something new and in time got adapted to it. This strategy worked very well for the company and gave it exceptional results.

Oreo uses content marketing to grab a place in consumer’s minds. It makes sure that the content is relatable and exclusive so that consumers can engage and relate to it.

Oreo launched its first-ever Rainbow cookie in honour of its partnership with PFLAG National, which is the largest organization supporting LGBTQ+ people and their parents.

Colourful cookies grab the attention of the consumer easily as its something unique and as someone buys them, they also generate awareness.

The ads on social media and TV always leave sweet messages for their customers to engage them.

Below images give a glimpse of it: 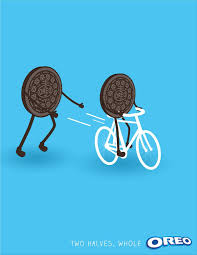 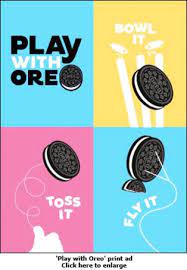 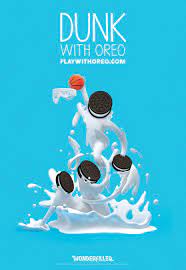 Oreo also uses celebrity endorsements as one of its marketing strategies to build its brand name and for brand recognition.

The company also does some amazing topical content marketing which means focusing on a specific topic to gain authority. The goal is to produce relevancy to impact search engine rankings naturally.

When the lights went out during the 2013 Super Bowl, that time, to grab our attention Oreo posted something on Twitter and Facebook with a simple message “You can still dunk in the dark”.

From these ads and posters, we can say that they use content marketing very effectively in their favour. Now, let’s see some marketing campaigns by Oreo;

Oreo is always innovative and creative when it comes to marketing campaigns. Below we have listed some of the best campaigns by Oreo.

1. At Home With Oreo

Oreo has come up with a campaign ‘#AtHomewithOreo’ to help consumers spark their innovative plugs and drive creativity with Oreo cookies. The company tries to add fun to the daily lives by embracing the new normal by the activities that have an unusual way of helping people stay connected.

Oreo has always encouraged playful family moments, and the “At Home With Oreo” campaign aims to encourage people to adopt playfulness while staying indoors.

From fun recipes with Oreo to keeping its hands busy with Oreo Art, and even giving adults a break from their WFH madness, they’ve ensured that the spirit is alive and well.

During the lockdown, the 2nd version of this campaign was released. It was to encourage customers to share moments with their loved ones. The company has an anthem “Make Way for Play”.

Oreo has taken the campaign further with #MakeWayForPlay. A fun challenge that brings people into the fold by passing on the Oreo wand virtually.

Nowadays, people are also using oreo biscuits to prepare cakes, shakes, and other food items, and are uploading various videos and blogs about it. Though this promotion is not done by the company, indirectly the product is being promoted. It is also creating awareness about the product and henceforth increasing its sales.

Now, let’s have a look at the SWOT analysis of Oreo.

Swot analysis is a tool that helps an organization to identify its strengths, weaknesses, opportunities, and threats. By identifying them they can work on themselves and form a proper marketing plan.

So, by the above analysis, we can say if Oreo keeps its promotion strategies plan on track and collaborates with different institutions, it will be a market leader suppressing its competitors.

Oreo is a renowned cookie brand, having its operation around the world. It is operating in almost every country and is having a sweet relationship with its customers. They always try to grab the customer’s attention through any sort of ad and sometimes merge the same with some trending topic. They have always stayed in the limelight and used ingenious strategies to become a market leader.

Found the blog interesting? If you want to learn more about Digital marketing and how to set up digital marketing strategies for startups do refer to our Free Digital Marketing Masterclass by Karan Shah, founder, and CEO of IIDE.

Thank you for reading this case study. Hope you found it interesting. Share it with your peers and comment about your takeaways.