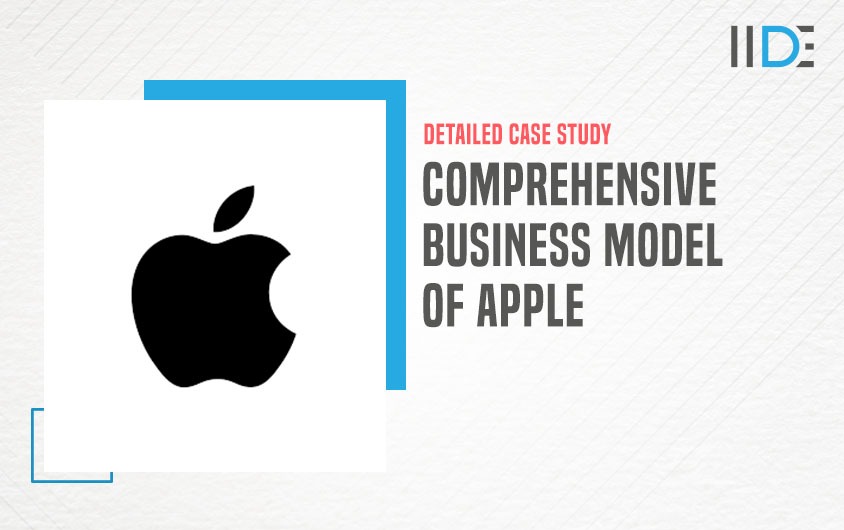 With the debut of the Macintosh in 1984, Apple revolutionized personal technology. Apple is now the world’s leading innovator for iPhone, iPad, and Mac. Innovation and consumer-gentrified devices underpin Apple’s business model. Due to simple designs and data migration to new product lines, they can maintain their base. Apple employs over 100,000 people to produce the best things on Earth and to make the world better than we have found.

This case study is a comprehensive review of the Business Model of Apple, including an overview of its target market, services, statics, and sales, etc. Also, read our other this for several case studies about marketing approaches of different other firms, but first, let us know more about the company.

On April 1, 1976, in Cupertino, California, Apple Inc., a trillion-dollar firm, began its adventure. It was established as a computer company by Steve Jobs, Ronald Wayne, and Steve Wozniak. However, it presently has 1,5 billion active users worldwide. The iPhones and iPads constitute 80 per cent of active smartphones. Apple Inc. is the world’s largest sales aggregate. Your successful path is encouraging and your market continues to increase. Apple was ranked as the world’s number one brand in 2016. Beat that!!! Beat that!! The world’s number one company with billions of businesses. It is hardly surprising that, as can be seen from the Apple Marketing Mix, the corporation has beaten all. One of the first terms to describe Apple as a brand is “Innovation.” “Innovation.” That’s because it has very few but incredibly strong and innovative items in the number of products introduced by the company. Apple doesn’t have Samsung or Google’s product portfolio, but it has the strength to overcome them all.

The business model of Apple relies mostly on technology sales. However, from this point of view alone, it cannot be understood. Apple is a software as well as hardware that also succeeded. The iPhone is certainly an emblem of our times. However, the iPhone, because of its software, is also a very good smartphone. When we look at the growth of Apple in 2019, areas like wearable, home, accessories (items like AirPods and Apple Watch), and services were driving this growth significantly. So Apple’s business model was diverse by 2020.

1. Placing its product above anything else: Whenever it comes to Apple and its products, the brand has never failed to stand out. Be it its features, advertisement, or any digital medium promotion, it always has stood out. The placement of its products is distinctive in that they are bound to be noticed and eventually purchased.

2. Staying Focused Always to Optimize Global Presence of the Company: The money that the company is spending on its products is why Apple is never failing to astonish its customers. It is also focusing on providing some better services to its users so that there is no chance of them switching over to any other brands.

3. Integrated Business Model for better User Experience: The company is focusing on its integrated model of UX so that the users seamlessly invest in their company by purchasing its products. It is also focusing on digital mediums like Apple TV so that the young generation is still in touch and is fascinated by them. Privacy is what Apple plays. Nowadays, privacy is at utmost priority, and hence keeping these user interfaces into considerations Apple plays its cards and succeeds in collecting an audience.

The value proposal convinces clients that the products and services of the firm are the best of all competitors, for them to buy the products. Apple is such a large brand firm with a tremendous deal of worth. When iPhone 4 was released in 2010, the smartphone market abruptly occupies. People could see everywhere iPhone a few months afterward. Apple was the first manufacturer to create a powerful, convenient touch-screen smartphone. In general, the first firm to join the market tends to think of consumers as producing the best items in the field. Furthermore, the new iPhone 4 was so unusual in design and ISO operating system that its competitors distinguished it. In addition, the Apple apps were connected to many companies like Air Canada, Nike, Facebook, and the Apple firm is sure to be much stronger in the globe with these partnerships. As the company and the strength of its products got more and more known. This is why in 2010 when the first iPhone 4 came forth, it had such an incredible buying frenzy.

Apple makes money through its most iconic smartphones which have distinctive features in every model. The products go like:

b. Subscription for Apple Services:

Apple makes money through the subscription made by its users. These subscriptions revolve around the payment during purchasing music from iTunes or Apple Tv. To view digital content on an iPhone, one has to pay for access to Apple Tv. Even after having so many expenses to use an iPhone, one does not switch its brand unless required. Such a trademark of brand loyalty Apple has set in the minds of the consumers.

In most of its key markets, the company offers its products and sells items through its retailers, online stores, and direct sales staff directly to consumers and small and medium-sized enterprises. The Company also utilizes a range of indirect channels, for example, cellular network providers from third parties, wholesalers, retailers, and merchants with value-added products. During 2017, the Company’s net sales through its direct and indirect distribution channels accounted for 28 per cent and 72 per cent, respectively, of total net sales.

Apple is divided up in products and services into a diverse business model. The business of services mainly consists of:

Apple’s products are wide-ranging. They provide all users with innovation, creativity, and superior technology. Their products are in many segments of demand. Through their products, their target market is determined. They have moreover 1,5 billion users and with their annual product releases, their market is expanding. Air Pods, Apple TV, Apple Watch, iMac, iPad, iPhone, MacBook, etc are currently hardware devices and software services are available, as are iCloud, iLife, and so forth.

The age of loneliness is 22-55 years. This group is a market for the company conveniently. However, the age dimension differs with different items. Similar to the intelligent compact devices, 20-45 age groups are increasingly used. When the age range from 18 to 30 is used by iTunes, Apple Pay, App Store, and iTunes. And ultimately the users of apples, television apples, and accessories are 20-45 years old.

Apple has been dividing its company into five sectors since 2018: iPhone, iPad, Mac, Wearable, Services, and Home Accessories. The iPhone provides most revenues of Apple, but both wearables and services, home and equipment have gained more prominence in recent years as Apple seeks to find new means of preventing stagnation in revenue. From $42.7 billion in 2009 to $156.3 billion in 2012, Apple revenues climbed considerably. In the period, Apple improved its production capacity greatly via its Foxconn partner, which allowed worldwide sales of the iPhone. It also saw the arrival of the iPad, which in its first year of sales added $19.1 billion in income. 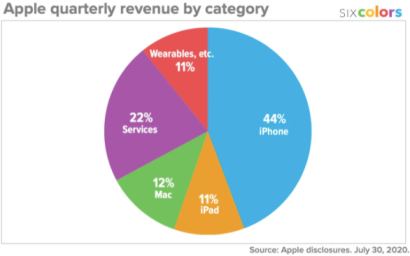 The Board of Directors of Apple has declared a $0.205 cash dividend per share in the common shares of the Company. At the close of business on February 8, 2021, the dividend shall be due to registered shareholders.

With with we come to the end of the Business Model of Apple. Let’s conclude this case study in the section below.

Apple is divided up in products and services into a diverse business model. While sales of iPhone still account for 54 per cent of Apple’s total revenues in 2019, the firm also offers rapidly increasing services and subscriptions. The company is even more marginalized than Apple’s goods business. That makes it interesting that Apple will continue to drive its growth in the years to come. With the sales of the Apple iPhone significantly decreasing in 2019 compared to 2018, the firm also pushed more on tech accessories (especially AirPods) (41 per cent growth compared to 2018).

Did our work please you? Wanna learn more? Wanna learn more? You may also go to our website and check them out on yourself, by offering Facebook and Instagram classes, digital marketing courses, and many others. You can also attend Karan Shah’s Free Masterclass.

Do Share this with your friends if you found this blog beneficial and help them learn. Also, in the comment box below, let us know your ideas about this site.