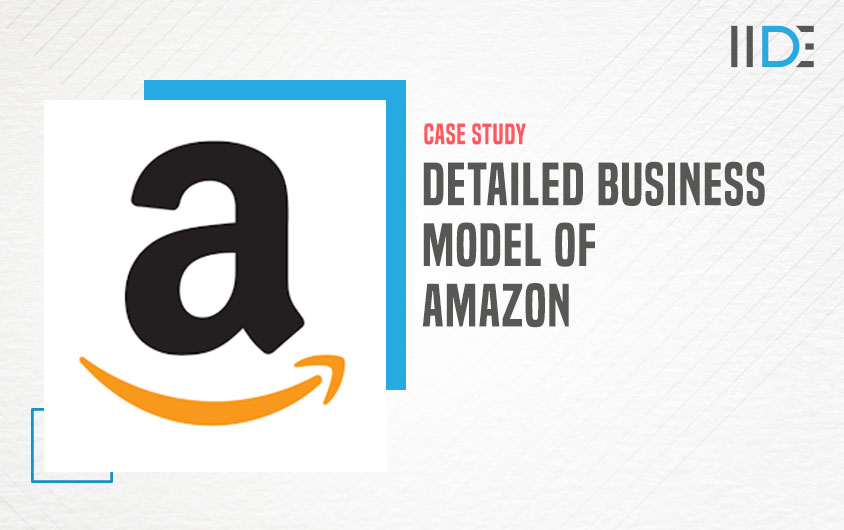 You must have heard about Amazon and its success, now is the time you should learn more about the business model of Amazon.

Amazon.com, Inc. Is an American multinational technology and e-commerce, cloud computing, digital delivery and focus on artificial intelligence. It is one of the top five companies in the US IT industry, as well as Google, Apple, Microsoft, and Facebook.

What exactly is Amazon doing to appeal to the customers? Have you ever thought about the recipe behind this huge success?

If yes, you are on the right page. In this blog, we will look at Amazon’s target audience, marketing strategy, campaigns, and ways to attract new and existing customers.

Amazon was founded on July 5, 1994, in Bellevue, Washington, USA. It has grown significantly since its inception as a book sales website and has spread its wings to other disciplines such as logistics, consumer technology, cloud computing, and more recently media and entertainment.

In 1997, three years after its inception and after the IPO, Amazon had an estimated value of $438 million. The start-up has gradually evolved into a multinational and is currently valued at 1.6 trillion. The e-commerce giant is the second U.S. company after Apple to surpass $1 trillion, while its share price reached a historic high ($ 2050.50) on September 4, 2018.

Now let’s move towards its business strategies and see how well they implement them into the action.

Amazon’s Business Strategy is to study combines concepts, innovations, technology research, partnerships, and most importantly the strategies that are responsible for Amazon’s growth at such summits. In addition, you’ll find their sales figures in each segment and a summary of their stock prices for recent years.

It’s about strategies that Amazon has used and benefited from over the years. But wouldn’t this information have been extremely helpful to Amazon’s competitors a few years ago? It turns out they probably knew about Amazon before.

They do keen research on the target audience and understand them properly. So, let us examine that in-depth from the further analysis.

Amazon’s target audience data is related to the shopping behaviour of users. Marketers can take advantage of the six targeting options available on the platform, including behaviour, lifestyle, context, re-marketing, appearance, and ad audience.

Taking advantage of the Amazon DSP can significantly expand the brand’s audience by going beyond the Amazon platform and using Amazon’s audience data to convert traffic to your website.

Amazon DSP is a rough programmatic advertising platform where brands can access inventory and outside of Amazon.com. Brands that combine strong shopping behaviour data from Amazon users with the platform’s broad targeting capabilities create more efficient campaigns that reach a wider audience.

Moving forward we have the perfect illustration of the business model of Amazon. Let us study Amazon’s investment in different technologies

Amazon has invested heavily in robotics and drone technology for the past decade and has won many patents on them. More than 45,000 robots in his warehouse’s single house. The company designed a robot in 2012 for $ 775 million for the picking and packing process, is called Amazon acquired Kiva Systems.

In addition to the acquisitions, Amazon also hosts challenges at various universities and institutes around the world where they pay large sums of money to innovate the next generation of robots. In 2017, the prize money was $ 250,000.

Amazon is researching drones for their initiatives and future supply of drones. In the UK, Amazon launched its drone delivery service under Amazon Prime Air.

At an advanced level, drones have received a patent for electric vehicle charging systems. They will need many ways to show interest in the future of automobiles in EV charging. Also, there will be nothing to be surprised if Amazon enters the automobile domain.

Artificial intelligence is a difficult area, where many competitive despite Amazon has a big draw. AI and machine learning to constantly enhance the customer experience is the focus. AWS and the AI segment of the Internet on the initiative Alexa a large part of their investment.

In December 2016, Amazon showed off the world’s most advanced physical store. In 2018, Amazon was officially opened to the public in the store and showed the world that his research on machine learning to a real job away.

There are no checkout points in stores and shopping so you do not have to pay any cash register. Whenever you take a product from the shelves, then the payment can be automatically added to the cart. After the purchase, the payment is automatically deducted from your account or digital wallet.

Amazon has recently acquired companies in the cloud computing space and invested in cloud-based businesses. In early 2017, the company acquired several companies to strengthen its AWS cloud business. Some of these include GameSparks, Thinkbox Software, and Harvest.ai. Additionally, Amazon’s cloud services, which Amazon has invested Grail potential future customers.

The technology and automotive industries are similarly overwhelmed by the news of the acquisition of Amazon California-based startup Zoox, which develops autonomous driving technology in a deal worth more than 3 1.3 billion.

Since Amazon is aggressively investing and researching various automated methods of domain and distribution of autonomous vehicles.

In December 2020, Zoox unveiled the first version of their fully functional, electric, self-driving vehicle, which also features two-way driving and is capable of speeds of up to 75 miles per hour.

Amazon invested in TV series and movies via acquisition or production, since it is competing streaming Netflix, HBO, Hulu and tries to compete with Disney.

In 2017, Amazon has gained a lot of TV shows and movies. Amazon has acquired Marvel’s inhumane and runaway way to give Netflix better competition, giving it the right to stream some Marvel shows.

Amazon Prime video of the original series and the movie is launching worldwide. Amazon Original Movie Borat, the next movie film starring Sacha Baron Cohen, has created millions of customer streams worldwide over the weekend.

Not only will creating video-streaming services help you, but that’s also why Amazon will create its factory for making movies and TV series, known as Amazon Studio. Currently, the core content of HBO is much less than other services like Netflix, Hulu, and Amazon. But Amazon creates its content and a huge number of plans.

Amazon Studios has announced the upcoming Prime Video Series and Movie Deal, which includes the Eddie Murphy Comedy Coming 2 America, the worldwide premiere of Prime Video 2021 Premiere, and a copy of Jessica Simpson’s best-selling copy based on the documentary and the new Coming Series Memoir Open Book.

Amazon is not limited to providing video streaming because the company has its music streaming platform – tough competition for Spotify, YouTube Music, Apple Music, SoundCloud, etc. There are millions of songs in Amazon’s library that they are gifting to their key members. Prime Music is a gift to their core members because the company is not incurring any additional costs for this music platform.

Even for a better experience, Amazon has integrated its Alexa on Music app to find what you are looking for tracks that can help you.

In January 2020, Amazon said it had 110 active fulfilment centres in the United States and 185 worldwide. There are plans for a massive investment in the expansion of the capacity of fulfilment centres and other supplies. Amazon filled by the seller and the number of packages that run even more important.

To bring to the supply and distribution network, Amazon announced the development of an app to help truck drivers. Amazon has aggressively recruited for the project and announced it will launch in 2017-2017. In November 2017, they secretly launched App Relay. The Amazon app for truck drivers in warehouses package makes it easy to pick up and move. Also, Amazon is working on a second application that can connect truck drivers with screw-like screws.

In March 2016, Amazon gave a public demo of its Prime Air Delivery drone in the United States. There is the concept of multiple regulatory barriers. However, the situation could be better, for example, in October 2017, Trump local governments had more power to manage this new technology provides a check was issued.

Third-party merchants sell Amazon. com-Amazon products, collect packages from warehouses and oversee the delivery to their customers’ homes. More can be expected to reach the last mile at the doorsteps of customers across Amazon, providing more flexibility and control.

In October 2017 the French supermarket operator Leclerc was approached by a potential supply partnership for Amazon. Amazon’s intent to expand the cooperation in this sector shows the supermarket.

So, that was all about its business strategies. Now, let’s study its acquisition strategy.

Amazon is aggressively using its merger and acquisition strategy, as it has in the last five years, 30+ close the deal. In the first two quarters of 2017, the company has closed eight contracts, which costs them a hand and afoot.

In June 2017, Amazon bought the grocery giant Whole Foods for 13.7 billion dollars. This was a big step for Amazon because it will strengthen their segment of grocery e-commerce at the same time open the door to new opportunities. Internationally, Amazon e-commerce is still growing through acquisitions, such as Souq.com which has expanded its operations by acquiring other businesses.

Amazon invests in a wide variety of industries. During the period 2011-2013, the Amazon program slows their investments because they invest most of the Internet companies.

In 2016, Amazon partnered with Twilio to strengthen its communications platform through text and voice messaging.

In 2017, Amazon invested in a healthcare startup grail minimise to a specialist for the diagnosis of cancer. This is Amazon’s first investment in the life sciences department. Over the past few years, Amazon has focused on late-stage deals where most of the investment fell in the 10M- $ 20M range.

We are finally at the last prospect of the blog that is the financial analysis of Amazon.

Despite Covid-1, Amazon has seen a growth that lost three-quarters of its growth forecast, and in the fourth quarter, it achieved $ 100 billion in revenue for the first time in a single quarter.

But third-party vendor subscriptions increased $ 80.43 billion, which was due to a significant increase. Amazon is a huge marketplace and no one can sell their products through Amazon, for which the company has a 15 to 20% margin.

What will be the top search engine results if a company knows, but it’s Amazon. Why? Because they understand how people search for products and services online. Concerning their digital marketing strategy, Amazon Digital Marketing and consumers want to easily and quickly move to the top.

Last year, Jeff Bezos announced his 1 billion investment in India for the next five years.

Such a huge resource can allow Amazon to enter any of their businesses and it can be a problem for players for different domains. The acquisition of Zoox is a good example because it can drive other autonomous vehicle companies for money.

Without having to create an identity of being the world’s biggest Internet storefront, ayamajanake should continue to produce such interesting content and they should be applied in the best way possible to stay competitive.

You may found it informative and useful. Want to explore more? Check out the knowledge and case studies portal on the  IIDE – Indian Institute of Digital Education website for more interesting case studies. Moreover, if you’re interested in Digital Marketing, IIDE’s Founder and CEO- Karan Shah’s Free Masterclass is an excellent place for learning in a better way.