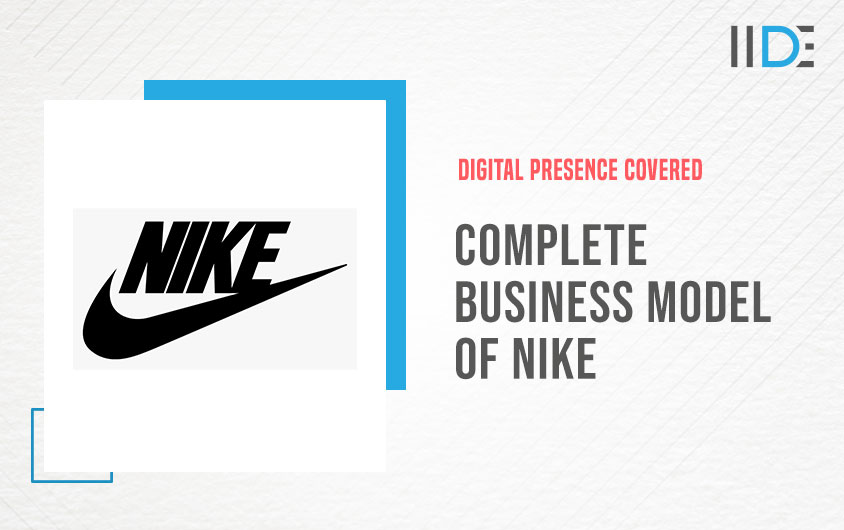 Nike’s journey from a Japanese shoe importer to building one of the largest and most iconic sportswear brands in the world today. The Journey has been so stimulating and phenomenal. Nike is the leading brand of athletics shoes, apparel,  sports equipment, and sports-related services. It has a market share of $39.1 billion making it the largest sports brand in the world.

Nike, one of the most valued apparel brands, has always kept its customer on their toes with its captivating advertisements and athlete endorsements with the best-known sportspersons like Cristiano Ronaldo. Thus this makes us eager to know the business model of Nike.

In this Case Study, We will be discussing the business model of Nike and its marketing strategies.

But, before we go through its business model let us know about Nike as a company.

Founded in 1964 as Blue Ribbon Sports by the Coach and Student duo, Bill Bowerman and Phil Knight who are currently the co-founders of the company. It became Nike in 1971 which was named after the Greek goddess of victory.

The company’s world headquarters are situated near Beaverton, Oregon, (USA). It employs over 75,500 people around the globe. In 2020 the brand alone was valued at around $32 billion, making it the foremost valuable brand among sports businesses.

Nike is well known for its ‘Swoosh’ logo and its “Just Do It” slogan. Other than its own brand, Nike also markets its product offerings under the brand names Nike Pro, Nike+, Nike Golf, Nike Blazers, Air Jordan, Air Max, and others as subsidiaries including brands Jordan, Hurley Int. and Converse.

Now having known so much about the company, let’s understand how does this valuable brand make money by looking at its detailed business model.

Let’s take a look at all the elements of Nike’s Business model one by one. 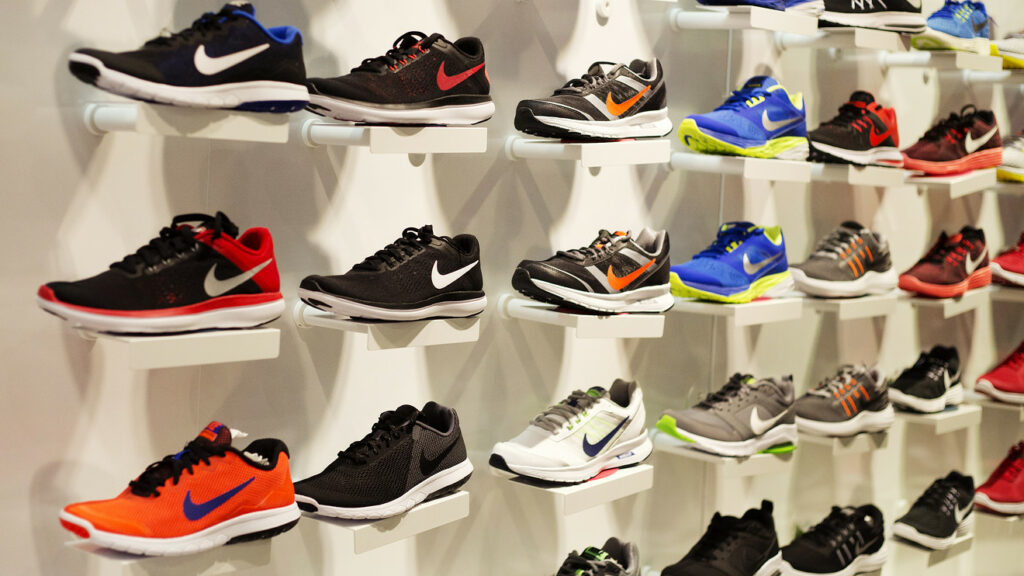 Nike is predominantly into the business of selling footwear and sports apparel in the following product categories — Running, Nike Basketball, the Jordan Brand, Football (Soccer), Training, and Sportswear. The company owns the Converse brand as well.

Nike markets itself to anyone who wants to purchase athletic and sports apparel, footwear, and equipment. Geographically speaking, Nike’s customer market is split into 4 main divisions, in order of revenue the regions being-  North America, EMEA (Europe, Middle East, and Africa), Greater China, and APLA (the Asia Pacific and Latin America).

Nike offers a diverse variety of products to inspire anyone to become an athlete. Their products heavily rely on the quality of their products, innovation (R&D), and status of the brand. This is the foundation of the Nike brand and it’s exactly what the customers seek when they buy a Nike product.

Let us now check the marketing channels of Nike.

Nike uses many different channels for marketing. Its main marketing channel is its brick-and-mortar stores, especially the Nike-branded ones. The company has a scattered sales network, with 1,152 physical stores throughout the globe. Nike also has an e-commerce platform, which serves in over 45 countries.

Besides these channels, Nike also employs other channels, such as social media, digital, print, TV advertising, brand events, and heavy sponsorship of athletes and teams.

The relationship with the purchasers is practically restricted to self-service. The customer can check the merchandise in the store (online or offline), buy and use it. Nike also assigns each of its customers a unique Nike ID which is a personalization service that brings Nike products closer to customer’s desires.

The revenue of the company is derived from the sales of its products: footwear, apparel, equipment, and accessories. In the past ten years, Nike has successfully managed to grow its revenue at a compounded annual rate of growth of 7.0% from US $19.0 billion in 2010 to US $37.4 billion in 2020.

Nike makes money by merchandising footwear via wholesale customers that distribute the Nike brands across the world.

Let us now see the key resources of Nike. 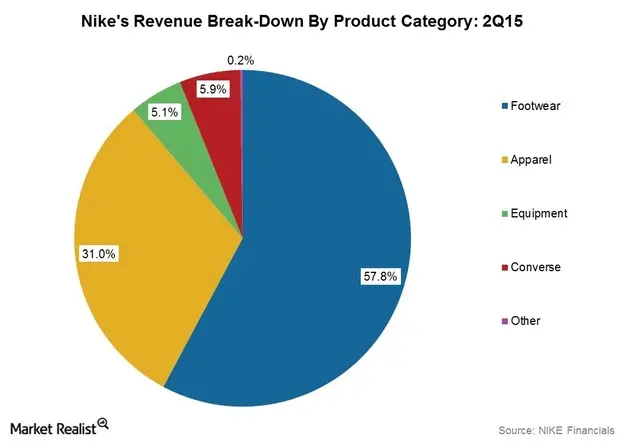 It has five physical distribution centres all over the world. It also has a team sports research lab and it has the third-largest design patent portfolio within the United States.

Let us now see what are the key activities of Nike.

The main key activity of the corporate is designing and developing the products. In order to achieve that, other activities are involved, such as negotiation with the suppliers, marketing, sales, and advertising are essential.

Let us now see the key partners of Nike.

Nike Waffle Shoes sold for $475,500, becoming the most expensive sneakers ever auctioned while Nike at present has 1,152 brand stores worldwide. Nike’s market share stood at around 27.4% during 2019, before its industry rivals Adidas and Reebok, making Nike the world’s largest company in the global footwear market.

Nike is amongst the largest and top three sports apparel companies i.e. Nike, Adidas, and Reebok and which makes the other two companies the top competitors of Nike Inc.

In 2005, Adidas acquired Reebok for $3.8 billion. After the businesses, Reebok and Adidas have acquired a robust position to compete with Nike. Adidas group consists of three subsidiaries i.e. Reebok, Runtastic, and TaylorMade.

Let us see the cost structure of Nike. 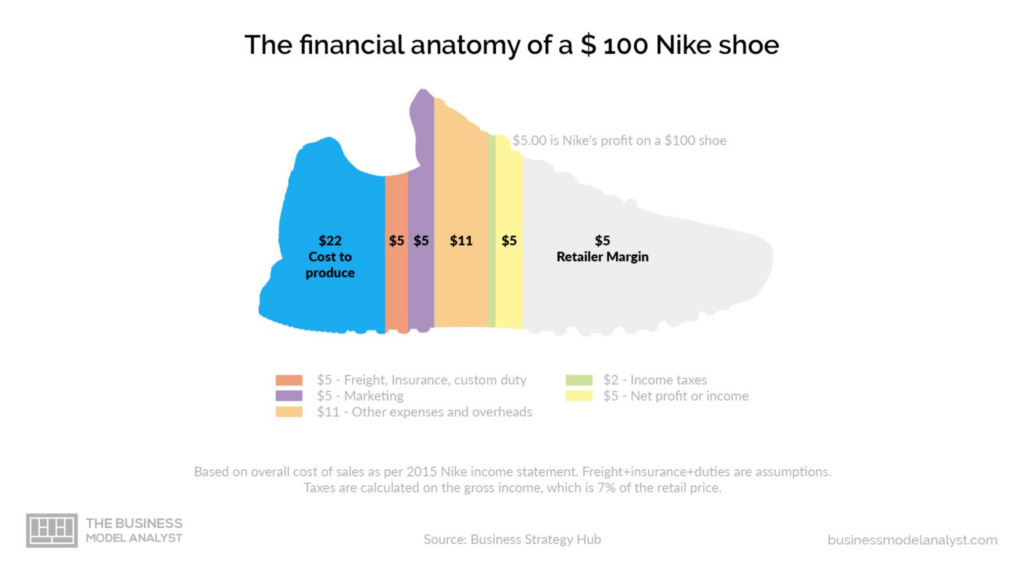 The largest expense for Nike is the cost of goods sold (mostly inventory and warehousing), that account for over $21 billion per year. In addition, around $3 billion are spent on marketing, including advertising and promotion costs, sponsorship, media, brand events, and retail brand presentation. The rest of the general and administrative expenses account for over $500 million expense each year.

After having understood the business model of Nike, let’s dive into the digital marketing that contributed to the success of the company.

Secrets behind the Digital Marketing Strategies Adopted by Nike

Nike has successfully transformed the athletic industry with its technological innovations, but today many of us know the corporate by its flashy ads and sports celebrities.

Well most definitely Nike can be termed as a marketing-oriented company, and their product is their most vital marketing tool. In digital marketing, when the term monsters are used, it basically refers to those giant companies whose success is immense, and every action within their online strategy implies multimillion-dollar profits. Nike is one among the other representatives of this category and a king in Marketing.

Let’s look into the Secrets Behind Digital Marketing Strategies Used by Nike.

1. Focus should always be on Telling a story instead of the brand itself

Nike believes that Gone is the era in which the marketing strategies were linked to giving characteristics of the company’s products only, in today’s date brands have to sell a story to keep people hooked for a longer-term.

Nike implemented this by shifting its focus from object-based ads to create a story around inspiration. ‘Just Do It’, Nike’s well-known slogan that invites a lifestyle that revolves around overcoming difficulties and invites people to reach their own potentials.

Let us now see the platforms that Nike uses.

2. Using the Platforms that the Customer Use 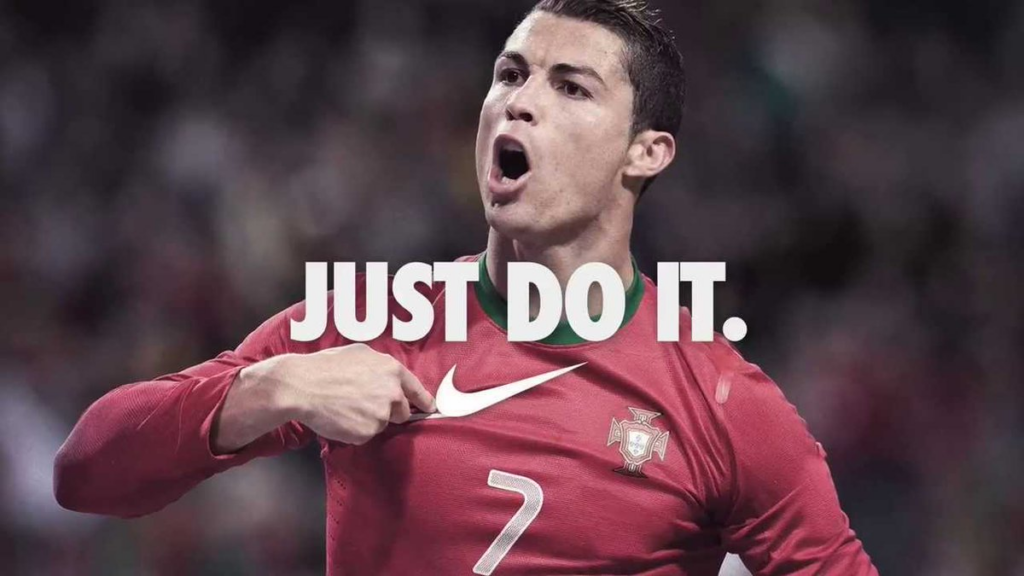 Nike found out that its target audience preferred youtube as its customer channel rather than television.

Nike believed that a brand must not be the one that just waits for the customer to find them. Instead, it should be the ones who must do the work of reaching its target audience. As a result of this, Nike’s latest video ads have had more airtime on YouTube than on television.

3. Always Allow the Target Audience to create their own content

Nike believes that a brand must give its customers the opportunity to customize its products according to their needs and preferences. For this Nike gave the customers the option of customizing the design of sports shoes in accordance with their style. This strategy makes users feel like a valuable subject for the company.

The history of Nike advertising has witnessed many ups and downs, but most of the time, the trend has been phenomenal. Nike has always believed that creating viral content is the key to grab your target market’s attention.

Implementing this they have always innovated and proposed new ways of distributing new ideas. And as a result, Nike’s advertising became popular all around the world which isn’t so easy to achieve for a sports shoe manufacturing company.

5. Always Be Aware of the Current Social Issues

It is very important for any brand to be aware of the current social issues surrounding the world. It should have few campaigns addressing them, for this Nike always tried to project a picture of authenticity and choose such protagonists for its advertisements characters that symbolized nascent social and cultural movements.

In the following years, Nike has developed its tactics by placing a greater emphasis on the spokesperson of its products and combining them into a successful strategy, by signing contracts with the most popular athletes. Which made it an “Athlete’s Brand”.

With this, our case study on Nike’s business model has come to an end. So let’s conclude this case study.

On the analysis of the business model of Nike, we can see that it has implemented its business model splendidly.  Its product offerings, customer segmentation, value proposition, customer relationship, key activities, etc are on point.

The evolution of Nike’s advertising campaign proves that the digital marketing strategies were a hit. The success story of Nike is halfway based on constant innovation and timely investments, which have resulted in Nike making a profit of over millions of dollars each year.

The success of the business model of Nike relies on the sum of innovation and marketing. The company faces some serious competition in the market – such as Adidas or Reebok. Honing their digital marketing strategy, Nike is making master moves to ensure that they are at the forefront of digital marketing and giving customers what they want, easy and fast.

Wasn’t it interesting to know the business model of Nike? Learn how to grow your business using digital marketing, check out our website for more information.

You can also check out Free Digital Marketing Masterclass by IIDE to understand what digital marketing is all about.

If you are interested in digital marketing and wish to be in touch with our academic counsellors then connect with them at admissions@iide.co for a free counselling session.

Hope you liked this case study and found it informative and insightful!