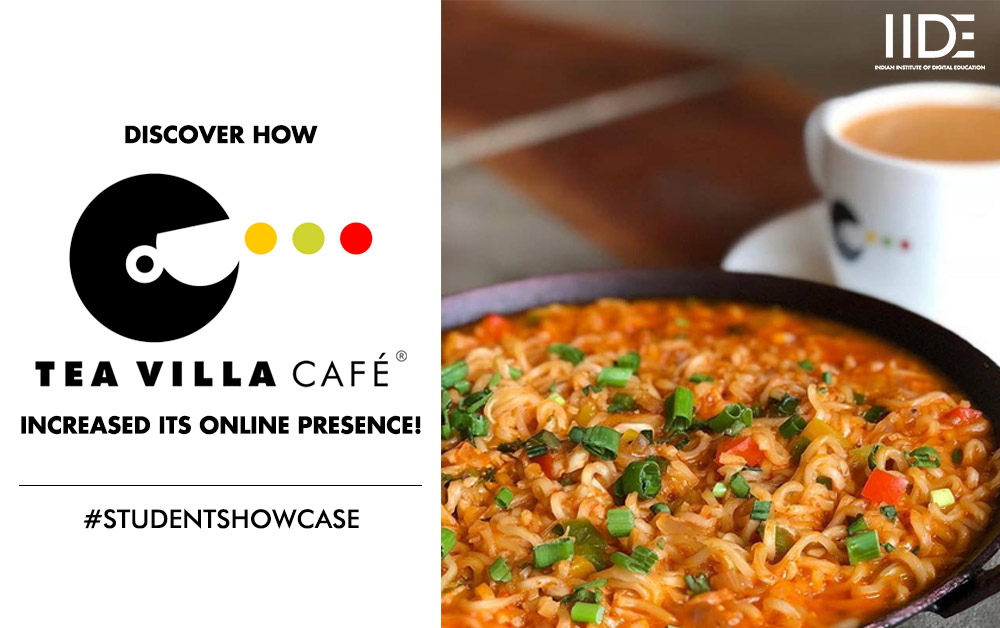 Isn’t India a land that thrives on tea? That’s what the founders of Tea Villa thought. But observing the prevalence of coffee culture in a nation that survived on the humble cutting chai, they decided that it was time for tea to make a comeback. And what better way to prove that tea is indeed the lifeblood of the country than to start a local teashop—and make sure it expands to become a household name across the city?

Two students from IIDE, Neha Nambiar and Disha Teckani, studied Tea Villa’s business model and came up with a digital marketing strategy they feel would be perfectly suited to the brand. Read on to see what they found about Tea Villa’s Digital Marketing Strategy!

Tea Villa was founded in 2014 by Micky Panjwani and Roopanshi Bhatt, colleagues working together in an event management firm. They were having a conversation at work about how 80% of Indians survive on tea and how few tea places there are to actually spend time in. This is when Panjwani casually put forth the idea of starting their business venture in this area. They opened their first outlet in Vile Parle, and as of June 2018, they have 18 outlets in total, having expanded to Thane and Pune as well!

The concept of Tea Villa focuses on spreading tea culture and providing tea lovers an alternative to popular outlets like Costa Coffee and Café Coffee Day.

Their most popular outlets are located in Bandra and Thane. The Bandra outlet is situated in the most prime locality within the city when it comes to food, and the Thane outlet does extremely well because of the sheer size of the franchise there, as well as the alluring décor.

One of the key factors towards the success of any business these days, especially local food businesses, is social media. And Tea Villa, in the space of only 4 years, has already learned this. They have 58k likes on Facebook, 10k followers on Instagram and 200 followers on Twitter.

Though their social media following is not expectedly huge, they have conducted some impressive social media campaigns in the past. Some of these campaigns include #TeaVillaFlea, which was a flea market they held in their Juhu outlet. They promoted this thoroughly on social media through witty creatives and pictures from preparations for the market. This led to coverage of the event by Mumbai Mirror, and also led to an immense increase in the number of footfalls to the Juhu outlet.

They have also given away Justin Bieber concert tickets when he played in the city in May 2017, and this garnered immediate attention to their social media as many hopeful concert-goers wished to win free passes. They also hold many other miscellaneous contests and giveaways on special occasions like Women’s Day and on Tea Villa’s anniversary.

In order to improve their social media following, our students suggested a few campaigns that they felt would go down well with Tea Villa’s customers, like the #EqualiTea campaign. This would be a social movement started by Tea Villa on their social media pages in which they would post pictures of tea to depict discrimination in society. For example, ‘Tea is the only thing that should be separated by colour’, with pictures of different types of tea like black tea, green tea, white tea etc. Their followers would be asked to share their own stories of discrimination along with a picture of tea and tag Tea Villa. The best stories would be featured on Tea Villa’s official pages. This would help increase both the brand’s engagement with its existing followers as well as to increase awareness amongst people who do not follow Tea Villa.

Another campaign that would prove to be effective could be #WordPower, which involves Tea Villa posting tea puns along with funny and relatable content, like individuali-tea, simplici-tea, mul-tea-tasking etc. Then, they could encourage their followers to tag their friends. This would introduce several members of Tea Villa’s target audience to their brand in a positive and humorous way!

#ChaiKiChuski could be a Twitter campaign aimed at increasing their engagement on the social media platform. Followers would be encouraged to post tea pictures with memes, puns and other light content and tag Tea Villa. Then, they would be awarded a discount on their next order at Tea Villa based on the amount of retweets they get! This would greatly boost Tea Villa’s Digital Marketing Strategy!

Often, brands bid on certain search terms to ensure that when users search these particular terms on the internet, the particular brand’s page pops up as one of the first results. This may be useful for Tea Villa in reference to other words that it could really capitalise on if they were able to be one of the top results.

Some of the suggested bid words for Tea Villa are coffee shops near me, green tea and fast food. This ensures that when someone searches for the said terms online, they are bound to encounter Tea Villa’s website as one of the first results. This makes the website more accessible to the people looking for eateries and café where Tea Villa has a presence, which is ultimately the group of people wants most to reach out to. This would greatly boost Tea Villa’s Digital Marketing Strategy!

Di Bella has the best campaigns out of the three, like their #ChildrensDay, #OkCupid and #WednesdayGamesNights campaigns that often keep their social media abuzz. They also have the best social media contests, like their #MothersDay contest and their iPhone 7 giveaway. However, it is Tea Trails that has the better website, as it includes a prominent CTA, merchandise showcase and even boasts of an online tea appreciation workshop!

Despite all of this, Tea Villa still comes out as the more successful of the two due to their fan following online, as well as their excellent engagement and interaction rate.

Tea Villa targets people of all genders between the ages of 18-35 who belong to the upper- and middle-class income group. These people must be either health conscious, or tea/waffle lovers.

Another way to engage your customers and ensure that they stay on your brand’s website for a longer duration of time is to provide them with interesting blogs to browse through. This is also known as a Content Marketing Strategy!

Which tea suits your personali-tea is an example of quizzes that the brand could create to ensure that website visitors spend more time with Tea Villa online!

An example of listicles that Tea Villa could post on their blog could be Teabag DIY. Listicles are extremely entertaining and captivate the reader’s attention, and at the same time subtly encourage the reader to buy cup of Tea Villa’s tea. In this case, the readers might want to drink some tea just because of the teabag!

Tea Villa does not practice email marketing, as of now. However, our students have set out to try and fix that. They have devised an email marketing system that includes:

A few online platforms that could be of use to Tea Vila’s Online Reputation Management could be Zomato, Quora, LBB, Youtube and LinkedIn. These platforms help the customers share their reviews of Tea Villa’s products and therefore spread the word!

Platforms like Quora often includes questions like ‘Best cafes in Mumbai, ‘where do you get the best macaroons in Mumbai?’ and other similar queries. It has to be made sure that Tea Villa is included in answers to all of these questions on said platforms! This increases the likelihood that, when someone searches something relevant, the Quora question with Tea Villa as the answer would be the top answer!

Advertisements could be sponsored in LBB as several foodies often visit this platform for recommendations related to eateries. Complaints on Zomato could also be tended to more often in order to avoid giving off a negligent attitude. This would greatly boost Tea Villa’s Digital Marketing Strategy!