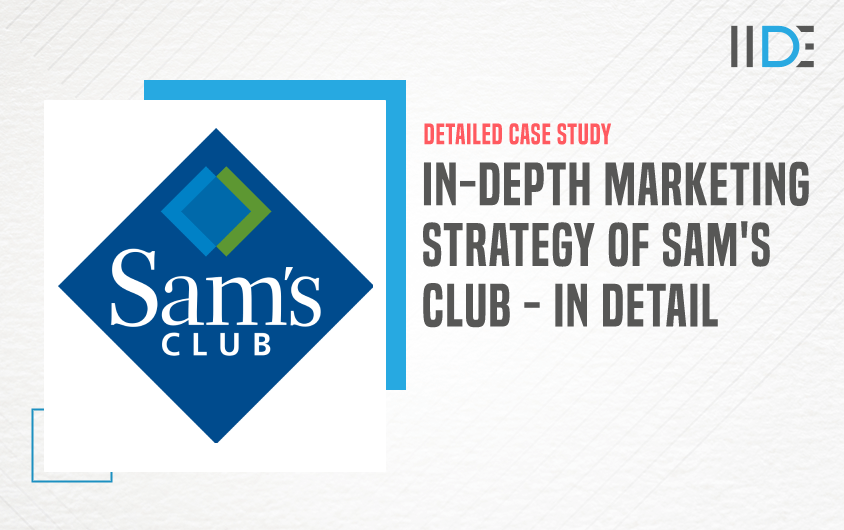 In our previous blog, we learned in detail about the extensive SWOT analysis of Sam’s Club.  In this blog, we are going to elaborate on the marketing strategy of Sam’s Club which focuses on members providing exclusive savings and merchandise.

The main objective is to learn about Sams Club and how it has become one of the best retail warehouse club members. It also has ranked second in sales volume among warehouse clubs with $57.839 billion in sales in 2019.

Marketing is a part of every business, whether it is a small or big company. Nowadays users across the world are going digital/online mode for marketing, sales, etc. If you are interested to know about Digital Marketing then do check out our  IIDE’s Free MasterClass on Digital Marketing 101 by our CEO and Founder of IIDE, Karan Shah.

From the United States, the organization has expanded to China, Brazil, and Mexico. Every year, over 20,000 Sam’s Club associates are promoted to positions with more responsibility and income. It also provides full-time associates with paid parental leave, additional support for adoptive families, savings, health plans, associate stock purchase plans, and associate discounts, among other benefits.

The target audience of Sam’s Club are urban middle-class and upper-class individuals with membership for club warehouse retail operations as the products include branded and expensive goods. Members are of both business and individual consumers. This segment also includes online sales at www.samsclub.com.

Sam’s Club uses its app store and online platforms to target its customers, and the club had created a campaign with Liftoff. The club introduces sam’s club which offers a curated assortment of high-quality products at an incredible value.

Sam’s Club made its positioning in the market with an effective brand and effective marketing strategies. The club offers credit value to all the members on its Mastercard for fuel, dining, travel, and everything else. Club interacts with their customers in many ways like celebrating Independence day with an $8  membership offer, Initiating a food donation camp, and Helping to fight hunger to change.

Sam’s Club organizes its ad debut at football’s biggest game of the year on 31st Jan 2022. There was huge excitement among fans, using their social strategy the club made a way to reach the fans. The campaign collaborates with a star who is an actor, comedian, and entrepreneur Kevin Hart, the “Like a VIP” spot highlights the warehouse retailers. The ad follows Hart shopping like a VIP.

The strategy was like, the 30second commercial will air at the two-minute warning in the four quarter. The club will carry the VIP theme into the Big Game by giving fans a chance to score like a VIP on Sam’s Club membership and prize packages.

In-game when the yard line in the ball is spotted at the time the ad airs will be the price new members can pay for special, limited-time offers for annual Club membership so that fans should tune in to see the discounts. The club is also giving fans a chance to win one of four incredible VIP offers – a $25,000 shopping spree at the club, A luxury vehicle by sam’s auto buying program, fuel for a year, and a $50,000 VIP trip.

To enter and to win the sweepstake fans can tweet or add comments on Instagram, #samsclubsVIP, #sweepstake. The Club plans to announce the winners on social media throughout the Big Game. This campaign makes a huge crowd on its social platform and increases fans’ excitement about the contest. 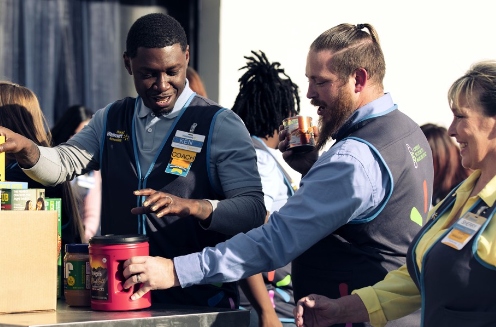 Sam’s Club with Walmart has also reached a food donation milestone. For context, 7 billion pounds of food equates to more than 50 billion meals. The campaign name was Fight Hunger. Spark Change to involve others in this fight against food insecurity. This campaign has been going on for the last 9 years, this year it’s also about raising awareness in the community that simple action can make a big difference for people who are in need.

With the help of Clubs associates, members, customers, and suppliers they have secured over 1.5 billion meals for people in need. That progress is valuable and exciting. Progress has certainly been made this year that Walmart stores and Sam’s club are working to help fight hunger. They will continue this campaign until their neighbours access the need for food that sustains them. And they always welcome those who want to help them.

Sam’s Club is active on social media like Facebook, Linkedin, Instagram, and Twitter. It has the maximum number of followers on Facebook than on Twitter with 34,77,636. On Twitter and Instagram, the followers are 144.3K and 52.6K. They have the lowest number of followers on LinkedIn with 2,11,482 because on LinkedIn most job professions are there. The posts contain information on warehouse products, offers, and campaigns held by the Club. 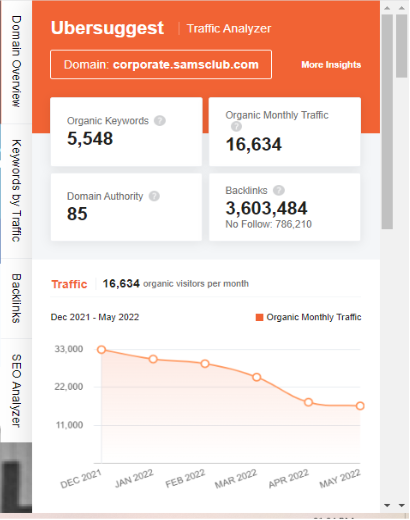 As per SEO Ranking, the Number of keywords below 500 is bad, above 100 is good, and 10,000+ is amazing. As we can see, the Organic Keywords of Sam’S Club is 5,548 which is considered as good. It means the Digital Marketing of Sam’s Club is gaining a good number of insights.

The traffic engaging per month is 16,634 which is less than 20K so it is an average. Hence Sam’s club needs to improve its SEO Strategies to improve its Traffic and to keep the brand rank at the top of Google Organic SERP results.

About the Ecommerce strategies, Slams Club has an online website where customers can order goods online mode and will get the delivery, they even provide many offers on the website to engage customers their website.

Club also has Mobile Apps where the customers can order their products and get delivery on their doorsteps.

The Club has a mobile app called sams club event which allows participants easily navigate the events throughout the year. The app contains all the helpful information like schedule, venue, etc.

As Club is active on social media and collaborating with good content influencers, the content includes all their offers on goods, and about the goods. The associates from the local sams club store are encouraged to create content for social media.

For local advertising In the podcast, they mention doing this through an app called My Local Social, which serves as a content management platform for associates to post on social media. The social media team works closely with the HR, Legal, and Operations departments to make sure that posts aren’t likely to generate a backlash and will set the club up for success, not a failure

In the Marketing Strategy of Sam’s Club, we saw that the club focuses on consistent growth, by listening to their members and giving them what they want, quality name-brand merchandise at an exceptional price.

Unlike their competitors who are more concerned about sales, ratchet sam’s club focuses on sales, products, customers’ needs, customers’ abilities, as well as doing charity work to help those who need help.

Sam’s Club has set high goals for itself as they intend to continue to grow. Their vision statement is that they wish to ‘become the most valued organisation in the world.’ The Club focuses on its digital platforms to reach its customers with their needs, by improvising Digital Marketing strategies and trying to reach more customers with much more offers.

If you like such in-depth analysis of companies just like the marketing strategy of Sam’s Club check out our IIDE Knowledge portal for more fascinating case studies.