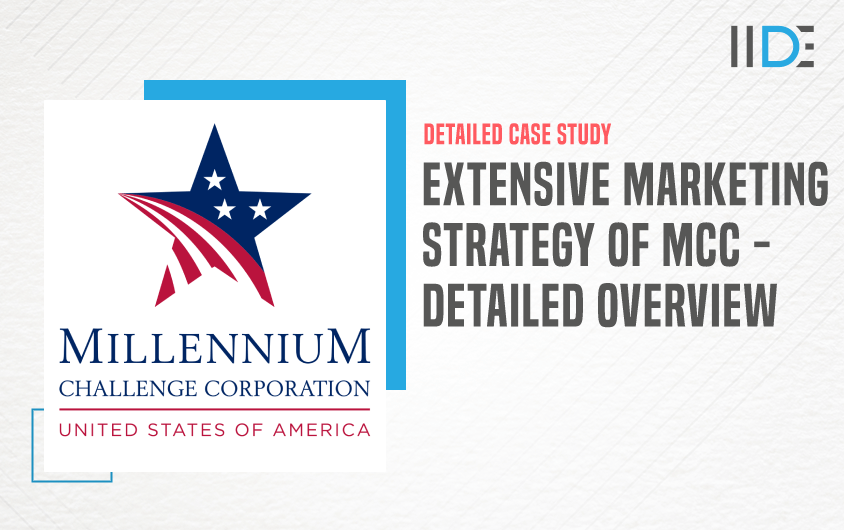 In a previous article, we learned about the detailed Marketing Strategy of InVideo. In this blog, we are going to elaborate on the marketing strategy of MCC – Millenium Challenge Corporation.

The objective is to learn and gain insights into MCC and MCC has a single mission: reducing poverty through economic growth.

We will learn the entire marketing strategy of MCC by the end of this blog. Before diving deep into it, let’s begin with the company’s story, target audience and digital presence.

It has been over a decade since MCC was founded as a bold experiment, and in that time the model has proven to be one of the most effective ways to transform lives and advance prosperity around the world.

MCC’s support for the best-governed poor countries has been a critical tool for promoting U.S. democratic values. And it has laid the groundwork for sustained and widely shared economic growth that lifts people out of poverty. This strategic plan provides a blueprint as we embark upon the agency’s next chapter.

As an institution committed to innovative development solutions, we recognize that MCC must continue to evolve to strengthen and deepen its impact. We must continue to foster an environment where learning is applied and adaptation is embraced. The occasion of MCC’s 10-year anniversary presented an opportunity to take stock of our experiences over the past decade and reflect on what we learned. This strategic plan was born out of that stock-taking and represents a collaborative effort with MCC’s staff, Board of Directors, and stakeholders in and outside of government. MCC’s unique approach to development is sustained by this community, which continues to amaze me with its enduring commitment to MCC’s model, mission, and people.

MCC’s mandate is to assist the world’s poorest countries in reducing poverty through economic growth while strengthening good governance, economic freedom, and investments in people in those countries selected to receive its assistance.

We believe that the MCC Compact is a threat to people’s sovereignty. Some provisions place it above the existing constitutional framework of the country, which places it beyond the supervision of a local regulatory body. MCC solely represents the geopolitical interest of the US and is an instrument of new-type imperialism to pursue economic hegemony over developing countries.

In 2017, the US signed a $500 Million MCC Compact purportedly to strengthen Nepal’s power sector, and to build a cross-border transmission line to facilitate more significant electricity trade with India. Two years later, in 2019, the MCC board approved a five-year, $480 million Compact with the Government of Sri Lanka with a stated aim to reduce poverty through economic growth, enhance the transport sector’s infrastructure and digitalise land administration.

As a social movement of peasants, smallholder food producers and farm workers in rural agrarian areas, La Via Campesina South Asia calls upon the governments of Nepal and Srilanka to exit the Compact and not to sign agreements which seriously challenge the right to food sovereignty. This Compact threatens our people’s right to self-determination, and political freedom, while also endangering peace in the region.

On many occasions, experts and even US officials have clearly stated that MCC is linked to the US military and Indo-Pacific strategy and is part of the US National Security strategy. Signing onto the MCC and Indo-Pacific Strategy is a threat to the Panchsheel principle of non-alignment and coexistence that both Nepal and Sri Lanka abide by.

Many campaigns and protests have clarified that the US is trying to drag Nepal and Sri Lanka into a ‘military alliance’ which is a severe matter affecting peace, harmony, and freedom. It also increases the risk of turning South Asia into a battlefield of strategic superpowers. Signing MCC will ensnare South Asian nations in a costly geopolitical conflict between the US and China and endanger our sovereignty.

MCC does not have any social media handle..but social media plays a vital role in campaigns and spreading awareness for all the firms. Nearly half of the world’s population uses social media platforms, they’re a natural place to reach new and highly, Establish your brand as a thought leader and help to stay top of mind.

As per SEO ranking, it is said that the number of keywords – below 500 is bad, above 1000 is good, and 10,0000+ is amazing. As we can see that www.MCC.gov has 1807 organic keywords and it’s considered as good. That means the digital marketing of MCC is gaining a good number of insights.

Also, the traffic per month is around 100K+ which is known as average. Hence, MCC still needs improvements in its SEO strategies while working hard enough to keep the brand soaring in the Google organic SERP results.

From the start, MCC has collaborated with many YouTubers, Bloggers, food pages, etc for their marketing purpose. They have many influencers with more than 50K+ and 120K+ followers. Influencers promote.. so that MCC gains popularity and the sales will increase via their fan’s following.

MCC does not have mobile apps, but They are also a great tool to benefit a company’s internal audience.. Systems in their own applications can optimize tasks, streamline processes and make information exchange more dynamic, improving staff productivity.

Mobile technology is constantly growing and occupying an increasingly important space in the business world.

The Millennium Challenge Corporation (MCC) was created in 2004 to pioneer a new approach to poverty reduction—firmly grounded in the best evidence and aimed at expanding the frontiers of development effectiveness. Over a decade later, MCC has a track record that validates the efficacy of this model, but it also has learned, and adapted, many important lessons along the way.

The challenge to end poverty requires a global response, with donors working hand-in-hand with partner countries, the private sector, and civil society to advance growth. MCC is a small but critical piece of the solution, and we will continue to utilize the most rigorous, data-driven, transparent, and effective programs to achieve our singular mission: poverty reduction through economic growth.

If you like such in-depth analysis of companies just like the marketing strategy of MCC check out our IIDE Knowledge portal for more fascinating case studies.