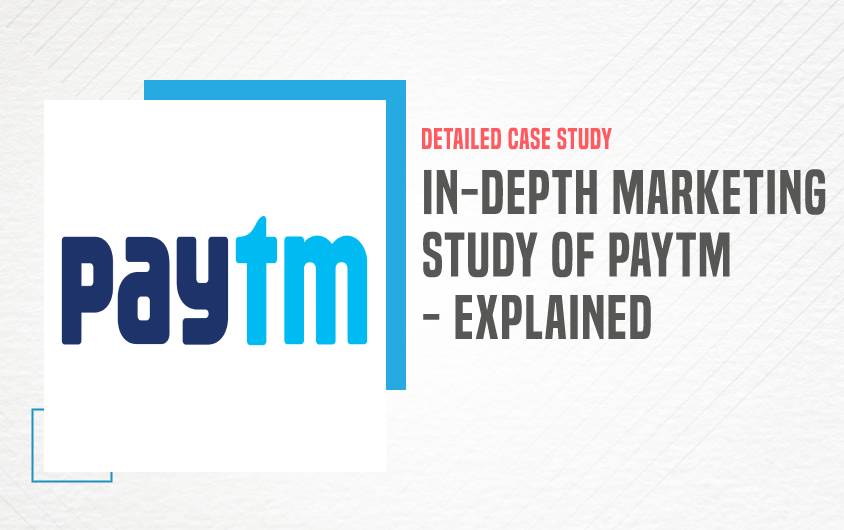 The parent company of Paytm is One97. The company’s founder is Vijay Shekhar Sharma, established in 2010 and headquartered at Noida, Uttar Pradesh.

In this case study, we will go through the Paytm marketing strategy, its marketing mix, marketing campaigns, competitors analysis, digital marketing analysis, and SWOT analysis.

Let’s begin by learning a little more about Paytm.

Paytm (short for “pay through mobile”) is an Indian multinational technology business headquartered in Noida that focuses on digital payment systems, e-commerce, and finance. Paytm is currently available in 11 Indian languages and offers online services such as mobile recharges, utility bill payments, travel, movie, and event bookings as well as in-store payments using the Paytm QR code at grocery stores, fruits and vegetable shops, restaurants, parking, tolls, pharmacies, and educational institutions. Paytm was valued at $10 billion in January 2018. More than 20 million retailers across India utilize the company’s QR code payment system to take payments directly into their bank accounts, according to the company. Advertisements and paid promotional content are also used by the company to earn cash.

Now that we know about Paytm. Let us now go through the company in detail by studying its marketing perspective.

Marketing budget primarily means the money allocated to the marketing functions and how it is intended to spend. Paytm’s cloud revenue went down by 38%. In the covid-19 pandemic, the payments related to entertainment and travelling have been severely impacted. The lockdown hit them hard and the total revenue of the company declined about 10%. They went from Rs.3,540 Cr to 3,186 Cr in 2020-21. The spokesperson of Paytm said, “despite significant disruption in the business of our merchant partners due to the pandemic especially in the first half of the year, we have had minimal impact on revenues, due to the strong recovery in the second half of the year”. However, the company reduces the marketing cost by 62% from Rs 1.397 Cr/year to Rs 533 Cr/year.

A marketing mix can be defined as a model that an organization uses to increase the interest in the products\\services and image of a particular company.

4 P’s play the major components which are product, place, price, and promotion. Let’s go to the marketing mix strategy.

Paytm is the acronym for pay through mobile. it offers various products and services in its marketing mix for example e-wallets, online shopping, latest news, vaccine slot updates, investment opportunities, and many more. Any customer can access the portal on their computers as well as mobile apps for making a specific payment. For instance payment of mobile recharge, bills, shopping, etc. Instead of using a debit card or credit card Paytm enables a user to make payments feasibly without them. Paytm also offers a facility of Paytm Bank from which a person can transfer money directly from his\\her bank account to someone else’s bank account for this he/she must give access to their saving bank account.

Paytm serves as a medium for the customers to make the payments for the other services which they are availing for this Paytm is entirely free to use.

Paytm has received huge Investments like funding of 575 million dollars from China’s leading business group Alibaba, an Indian business tycoon who had invested in Paytm as a personal investment in the brand. These use services enable Paytm to get new customers on a broad basis and give them free services they also simultaneously give discounts and offers to promote their online shopping E-Commerce portal.

3. Place and distribution Mix of Paytm

Paytm is accessible everywhere through a smartphone or on a laptop having a proper internet connection just like any other app or website. Paytm is available throughout the country to provide payments and shopping feasibility. It is widely accepted as a mode of payment across various industries sectors and geographies. Offline merchants and several restaurants, grocery stores, supermarkets hotels, and many more places are accepting Paytm as a part of the payment. It is headquartered in Noida India but the feature of booking rail, plane, buses, has extensively provided reach to a greater market. Also now Paytm has launched services in Canada and Japan.

Catchy phrases of Paytm as “Paytm Karo” have enabled Paytm to become a household name.

Multiple ad campaigns of Paytm are displayed on TV commercials, ad banners, billboards, print media such as newspapers, magazines, etc. The tremendous visibility of Paytm is not just because of these ad campaigns but also the fact that Paytm is highly involved in the sponsorship of various events, competitions, and many more. After the digital India campaign retailers are putting Paytm accepted banners which are providing strong visibility to the company. To gain global recognition Paytm sponsored and become a partner of the Indian cricket team.

The top 3 competitors of Paytm are-

It was founded in the year 2009 by Bipin Preet Singh and Upasana Taku, they commenced their operations as a mobile wallet to make digital payments convenient to their users.

The platform also enables peer-to-peer payment by unified payment interface, over the years they have served over 101 million registered users and more than 3 million e-commerce, physical retail, and biller partners.

In 2021, Phonepe achieved the milestone of 250 million registered users.

They have been awarded in the best mobile payment product/service category and the technology category at IAMAI India digital awards.

The Phonepe interface goes live across 10 lakh stores in 300 cities. By this, they became India’s fastest-growing insure-tech distributor.

Freecharge was launched in September 2015 they came up with their wallet to pay across all platforms plus offline stores like shoppers Stop, McDonald’s, home stop, crosswords, Hypercity, and even for some e-rickshaws now the list is growing day by day.

The claim is to provide an easy and instant recharging process with a hassle-free online experience.

They also provide a safe and secure payment process with the best discounts available in the market.

In simple words, a marketing strategy refers to a business’s overall game plan for reaching prospective consumers and turning them into customers of their products and services.

In 2016, they came up with an innovative initiative of “each one, teach one”. Paytm announced a scholarship of rupees 2100 for 10,000 users who will help them to increase digital inclusion and the practice of adaptation to Paytm. The scheme, “Scan any QR to pay using Paytm” was launched in 7 languages which were Bengali, Marathi, Gujarati, Tamil, Telugu, Kannada, and Malayalam.

2. Sponsorship of events by Paytm

As we said the earlier company is highly involved in sponsorship they target a variety of events, tournaments, etc these events give them immense exposure. Paytm is also the official sponsor and supporter of India’s cricket team providing them worldwide publicity.

3. Promotion and advertising strategies of Paytm

The company’s online marketing and traditional marketing approach are centred on bringing visibility anywhere by sharing their advert on Facebook and Twitter or even subsidized posts on Instagram and in instances even Snapchat.

In an offline communication network, they probably use newspapers, transit media, and television.

Paytm Plays amazingly well with their words, as soon as the news of demonetization was conveyed to the country. They came up with a tweet; Paytm Karo. It was a splendid example of a brand putting up an example of relevant and moment communication. They gained amazing response as it was simple and user-friendly.

5. Their product, their hero

They often post the screenshot of their interface on social media platforms, this practice makes the user feel that it’s trustworthy and worth acknowledging. They Make their post in such a manner that their post becomes the hero of their advertisement. 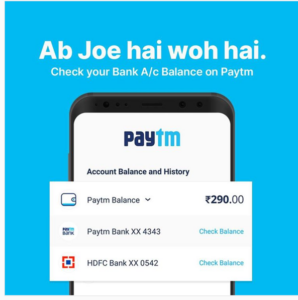 Data Protection is a primary concern for everyone with the evolution of digitalization, hackers are growing as well. Making the people understand that their account is safe and secure was a big challenge for PayTM as well. So they came up with an interesting approach where they went live to their Facebook and explain the Process and measures towards their security.

This turned out to be the perfect campaign for game lovers. Users were able to download the soldier game from the Paytm app. In this game, the Spartan Paytm soldiers were fighting against an army of frauds. The message which Paytm conveyed from this Campaign was how to make people aware of how Paytm protects its account.

3. The automatic start of the month message

At the start of the month Paytm initiated to send a reminder for the payments to other people by saying it can be easily done and stress freely achieved by using Paytm digital wallet.

They collaborated with the Mumbai dabbawalas and requested them to please use Paytm cash as an exchange of money.

Organizing such contests where the general public takes part often gets successful. In this campaign, a team of 4 was asked to create a video about how Paytm can be used, and the video that would get maximum likes would win.

This went viral and gave much more user retention to Paytm but this was Priorly for first-year MBA students only.

Paytm takes digital presence as a priority they are highly active on each of the social media platforms.

They understand valuably that where their target audience is present.

They frame their content as per focusing on youth attraction, the meme marketing is extraordinarily amazing.

They have a huge follower base on Instagram with several 4 million followers.

They post creative memes based on the present trends and giving it a slight wordplay to add a flavour of humour. Also by posting Reels to persuade people for booking vaccinations slots.

Having the popularity of 7 lakh followers on LinkedIn they focus to create a sense of responsibility among their audience. Also playing the role of a change maker.

Undoubtedly, their Advt campaigns are the best in spreading awareness among society towards digital payment. They post their advertisement on YouTube and have a great subscriber base of 316K.

We must understand the internal and external factors of a company it helps us in gauging its current status, along with providing valuable insights for its future position and this is achieved by SWOT analysis.

By this blog, we tried our best to cover every aspect of Paytm in terms of marketing. We are pretty sure that now you have developed a better idea about the marketing strategies. Paytm has convinced most Indians to rely on the use of digital transactions. In the first 10 years of their journey, they were just a wallet and a bank and they have a vision that in the coming 10 years they plan to be a great financial services company.

Thank you for reading, Liked our work? If you’re interested in learning further?

Do check our website for more. Also if you’re interested in Digital Marketing, here is your chance to attend a free Digital Marketing MasterClass hosted by Karan shah, CEO and founder of IIDE. You can also check out the DIGITAL MARKETING COURSE by IIDE.

Please let us know your thoughts on this case study in the comment section down below and do share with your friends and family.