The goal of this article is to give you a judgement about Lowe’s incredible transition from a small town hardware shop to being the most recognizable brand in the hardware industry.

If finance is the heart of a company then marking is the mind. The right kind of marketing strategy predicts whether the company will survive or thrive. Thus, having a better understanding of marketing is of crucial importance in today’s era, especially since there is an urgency created in the industry for digital marketing.

So, if you are keen to know about all aspects of digital marketing don’t worry we got you covered. You can enrol for IIDE’s Free MasterClass on Digital Marketing 101 coached by Karan Shah: the founder and CEO of IIDE.

We will now give you facts and figures about the marketing strategy of Lowe’s. Let us first appreciate the company’s story, its target market, and virtual existence.

Lucius Smith Lowe, the founder of Lowe’s initially opened a hardware store in the town of North Wilkesboro, North Carolina in 1921. The first-ever store of Lowe’s was named ‘North Wilkesboro hardware’ which was later passed on to James Lowe’s. James took his own brother-in-law Carl Buchan as a partner in business. Carl predicted the increasing demand for construction after World War II and expanded the store. By 1962, Lowe’s managed over 21 stores and reported yearly revenues of 32 million USD.

Lowe’s began trading on the New York Stock Exchange in 1979. In the fiscal year 2021, the company had sales of over 96 billion USD and serves about 19 million customers per week in the United States and Canada. Lowe’s and its associated organisations service nearly 2200 home improvement and employed over 30000 associates. Lowe’s is the second-largest hardware chain in the United States. Lowe’s also has a branch in Bengaluru, India.

The company supplies wide-ranging products like Home appliances, tools, hardware, builders’ hardware, lumber, building materials, paint, plumbing, and flooring. It has also started offering custom-made products to suit the specific needs of its customers. In addition to this, the company has introduced bathroom ware,  garden supplies, plants, and housewares.

The target audience of Lowe’s are between the ages of 24-36, usually, people with higher income as they can afford to avail of Lowe’s house consulting and installation services.

The company has positioned itself quite effectively in the hearts of its target audience by introducing do-it-yourself (DIY) products. It has established an efficient distribution network across the United States and Canada resulting in quick service delivery. One such marketing strategy of Lowe’s is the introduction of a special credit card that offers a 5% discount on every purchase its customers make. 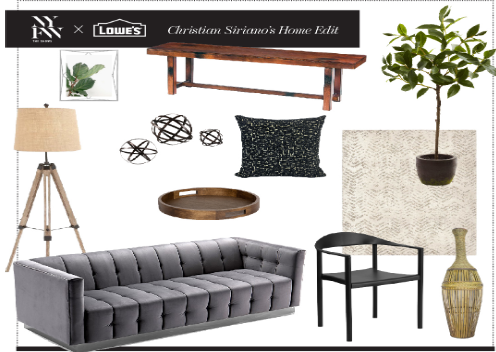 This campaign was so roaring that the company became the most talked about brand of the week. About 8600 mentions were seen on social media. This also resulted in Ad Age ranking Lowe’s as the no.3 marketers of the year making the brand a fashionable home décor destination. 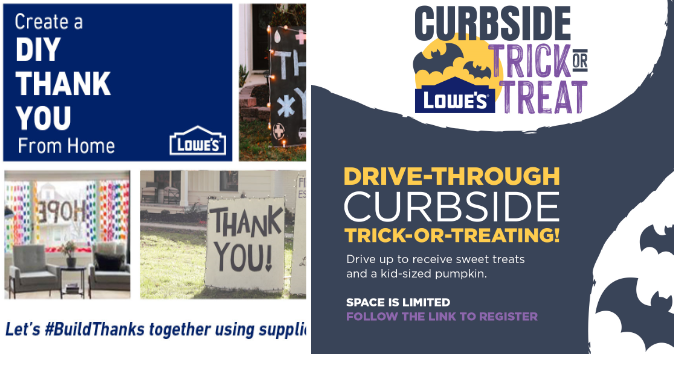 The company emerged as an early marketer during the pandemic as most people were secluded in their homes. It asked its customers to create thank you signs to display in their homes and yards as it serves as a means to thank the healthcare industry during COVID 19.  It also hosted a curbside trick-or-treat during Halloween. Lowe’s has recently also started an initiative called “ Lowe’s 100” through which it launched its exclusive paint line.

Celebrating its 100 years of improvement. This involved painting murals by different artists outside Lowe’s stores. This campaign helped Lowe’s to gain more followers on social platforms and market their products even when people were at home. The brand has gained customers from all sorts of niche audiences like artists and children.

The third market campaign of Lowe’s is quite groundbreaking. It has partnered with a group of NFL athletes for the second time. It hosted a ‘ Home team ‘ program featuring Super Bowl MVP and retired New Orleans Saints quarterback Drew Brees. In this program, all NFL players shared their journeys of developing their community and houses by using Lowe’s products and services. Lowe’s promoted DIY projects among the fans.

This campaign was quite successful as it led to fan engagement and empowerment of the community homes. In addition to this, it also tapped into new audiences i.e sportsmen and sports fans. As a result, more fans became aware of Lowe’s services boosting its sales. The main goal of every marketing strategy of Lowe’s is showing its commitment to its customers and helping in home improvement no matter what changes they face in their life. When it comes to SEO strategies it is believed that if the number of keywords is below 500 then the strategy is bad and when above 1000 it is good and when it’s 10000+ then the SEO strategy used by the company is really amazing. As seen in the stats above www.Lowe’s.com has about 15 million organic keywords which are exceptionally good, indicating that Lowe’s has been using digital marketing in the most effective way possible.

The website has about monthly traffic of 91 million which shows that the company is taking SEO seriously.

As a part of its influencer marketing, Lowe’s has started a “House of Style” curations program. This program features popular influencers like Jen Im who has about 1.7M followers on Instagram.

Lowe’s has recently also partnered with DJ, author, and wellness influencer Hannah Bronfman as part of its “House of Curators” series, in which she selected Lowe’s home décor pieces and promoted them on her Instagram handle having about 899K followers.

These influencers select Lowe’s products to form a curation and later promote them on their platform. This helps in boosting sales of the company.

Before 2018 Lowe’s didn’t exactly have a strong e-commerce strategy. But it has recently made lots of improvements to its decade-old website. Now the website provides a “shop’ option along with a wide range of products. Each product has details like its picture, price, reviews, description, and also instruction manuals. When bought online Lowe’s also offers free shipping on orders of USD 45 or more. 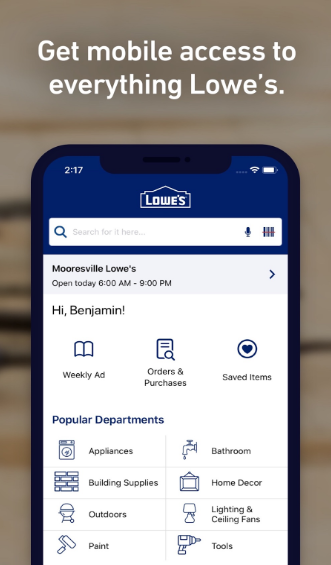 The company launched its own mobile app called “Lowe’s”. This app works similarly to its e-commerce website but offers a PRO version. This pro version gives the exact item location at a nearby store plus also gives information about in-stock quantities. It helps the user keep track of pending and completed transactions. With this app, you can search by taking a picture, using your voice, or scanning barcodes making the search for customers much quicker and easier. The app is for both iOS and Android users and has about 4.7 ratings.

The company has mainly focused on video content. It has also started short video series like “Made in Minute “, “Flipside”, and ” Fix in Six ” that deliver entertaining and instructional content. Their posts include instructions on how to set up their products, do-it-yourself (DIY) ideas, social awareness, etc.

Lowe’s is always quick to publish original content on social media. It also responds to comments of people on Facebook showing the company’s dedication. Aside from videos, they also engage in blogging tips for home decor and repairs. They make their customers aware of their new product releases through their official site, mobile app, and their social handles.

Lowe’s has definitely succeeded in its marketing strategies. This is mainly due to its ability to show up and help its community during its time of crisis. From building thank-you signs for healthcare workers during pandemics to their quirky viral DIY video, Lowe’s has gained a lot of brand loyalty. Lowe’s targeted a much more diverse audience and has now gained 20% more traffic than its rival Home Depot.

The introduction of its mobile app and separate credit card that offers a 5% discount is definitely the cherry on top which makes Lowe’s the second-largest hardware chain in the world.

If you like such in-depth analysis of companies just like the marketing strategy of Lowe’s check out our IIDE Knowledge portal for more fascinating case studies.