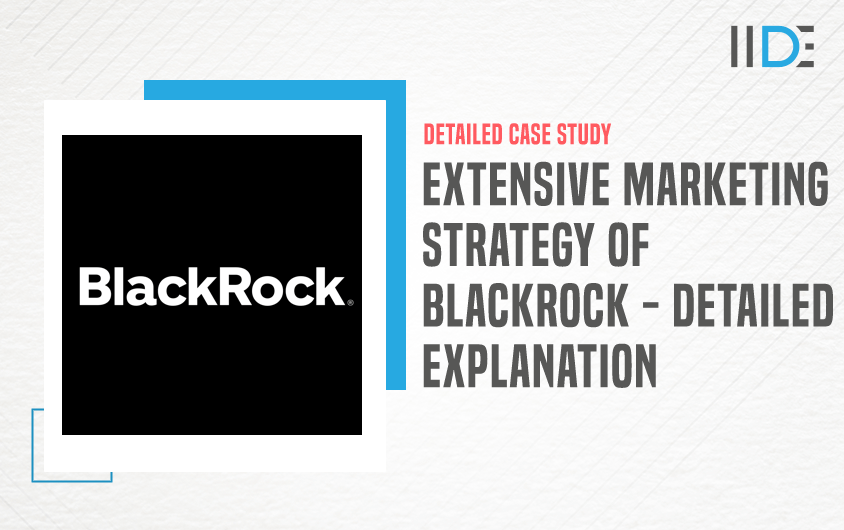 In our prior blog, we had done an end-to-end SWOT analysis of one of the largest banks, JP Morgan Chase. In this blog, we will be focusing on the extensive marketing strategy of BlackRock, an American Multinational Investment Management Corporation.

BlackRock started its journey in 1988 with eight people in a room who shared a determination to put the client’s needs and interests first. The founders believed that they could manage the assets in such a way that was better for their clients – by utilising their passion for understanding and managing risk. This is the way the firm continues to be managed today.

Now, BlackRock has stepped up into the digital environment. To accelerate their digital services, they have been acquiring new marketing strategies to adapt to changing environmental aspects. They have included digital marketing in their marketing techniques. If you are interested in learning digital marketing for a fresh kick start to your career – check out our free masterclass on digital marketing by the CEO and Founder of IIDE, Karan Shah.

Before we go into the marketing strategy of BlackRock, let us know about BlackRock as a company.

With 70+ offices in more than 30 countries – BlackRock has established itself as one of the largest asset management and investment corporations in the United States and the world also. The multinational group initially started in the year 1998 with the purpose of helping more and more people experience financial well-being. Today, the company has contributed to a more equitable and resilient world.

The company was founded by Larry Fink, Robert S. Kapito, Susan Wagner, Barbara Novick, Ben Golub, Hugh Frater, Ralph Schlosstein, and Keith Anderson. BlackRock, with more than $3.5 trillion under management, is the world’s largest money manager. The firm specialises in equity and fixed-income products, as well as alternative and multi-class instruments, which it invests in on behalf of institutional and retail investors worldwide.

BlackRock has also developed a Software Platform called Aladdin to perform risk analysis for its clients. It receives sensitive data from banks, insurance companies and other vital institutions. Through Aladdin, BlackRock has insights into managing financial assets worth more than 20 trillion + dollars.

Targeting can be done by evaluating the commercial attractiveness and growth potential of identified segments. BlackRock can choose one or more segments depending on the segments’ characteristics and the company’s resources, capabilities and growth objectives. Blackrock has always highlighted in times of Risk Management, that the target of the company is that it should be robust so that if any crisis comes in the world it can manage the risk.

Positioning can be determined by the SWOT Analysis of Blackrock which includes: Strengths, Weaknesses, Opportunities and threats. Looking at the data, the company had $20 Billion in Assets by 1994.

BlackRock runs eye-catchy ad campaigns that are analytical, the campaign tries to sneak into the emotions of the clients who are confused about investing their funds.

As their Marketing Strategy is excellent, BlackRock keeps 800 companies in their portfolio right from the US, Germany, Europe, and everywhere in fact in China too. 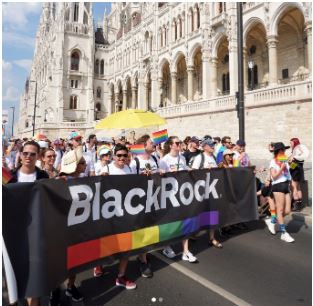 Picture from a successful marketing campaign run by BlackRock in Hungary, Budapest supporting the LGBTQ+ community as the co-workers for the company. The picture also shows the culture in the Budapest office. 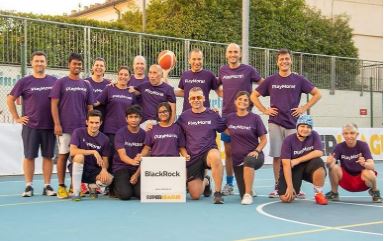 This is a picture from the BlackRock’s Milan office in collaboration with We Are Play More for the super league tournament which was well played by people with different disabilities who played together with the players of the partner company. 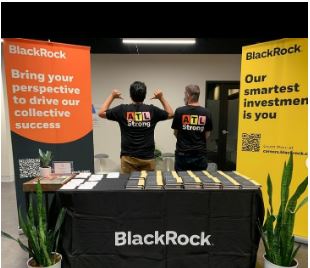 This is a picture of a recent event where BlackRock co-hosted “Get to Know BlackRock” with Technologists of Colour at the Russell Innovation Centre of Entrepreneurs, in Atlanta, GA. Technologists engaged with senior leaders and recruiters from the firm to learn more about #LifeAtBlackRock, the career opportunities they offer and BlackRock as a fintech company.

The Head of BlackRock’s Atlanta Innovation Hub & Global Head of Business Strategy for the Portfolio Management Group, shared her vision for the office: continued opportunities for growth, elevating the local talent pipeline and deepening our impact in the community.

Rich Latour, BlackRock’s global head of content and media, joined the firm from Goldman Sachs in 2019. BlackRock has ramped up its online presence to blast out its message to younger investors.

The major strategy plan by BlackRock is the tie-up with the local media houses with the narrative advertisement policy. Through the use of social media platforms like Google+, LinkedIn, Youtube, Twitter etc. they are trying to make a global outreach to the targeted set of consumers.

According to SEO rankings, the number of keywords – below 500 is poor, over 1000 is acceptable, and 10,000+ is great. As we can see, www.morganstanley.com has 552,452 organic keywords and is rated well. That implies Blackrock’s digital marketing is gathering a lot of information.

Also, monthly traffic of above 3M visits per month is favourable. Consequently, we can observe that Blackrock’s SEO techniques are working well and assisting them in reaching their goals.

Influence Media Partners (“Influence Media”) has announced a new alliance in partnership with funds and accounts managed by BlackRock Alternative Investors (“BlackRock”) and Warner Music Group (“WMG”) to create a music rights platform that will invest in and manage premier compositions from some of music’s most influential creators. This includes a strategic focus on cultivating the “modern evergreen,” contemporary compositions that have strong potential for a multi-decade impact on pop culture, as well as investing in female artists and songwriters, with an emphasis on diversity.

Blackrock provides a way for users to log in and monitor their Stock Plan, Matrix, as well as other accounts. They might also explore investor and media relations.

Blackrock offers several mobile applications, including Blackrock Insights which helps you stay informed of the financial markets and identify trends. Clients can also access and monitor their investment portfolios on the go. The app provides a unique service where clients can have service from the company when they want.

The Blackrock Phone Application keeps all of your personal finances close at hand. Manage your accounts, have access to account information, deposit checks, move money around, and communicate with the Blackrock crew from anywhere. And use many security layers when doing it online.

Blackrock uses Instagram and Facebook not only to promote their products but also to keep us up to speed on current events and the benefits of banking. They also share relevant postings on LinkedIn with their followers regarding their campaigns or new corporate changes.

On several social media sites, including LinkedIn and Twitter, Blackrock has been advertising its programmes. Campaigns including Who we are, Pride Month, Save the Children, and many others were pushed by Blackrock. Blackrock consistently produces audience-engaging content.

Blackrock is expanding in the banking industry in emerging nations, the United States, and the worldwide market. Blackrock’s marketing technique is gaining popularity all around the world. To promote brand recognition. To promote client contact, social networking applications are also deployed.

They outperform the market competition by promoting their items with a socially significant concept. Overall, Blackrock’s marketing strategy is strong, and they use cutting-edge marketing strategies. It uses digital marketing, the most recent marketing method, to offer online campaigns using social media sites like LinkedIn and Twitter.

If you like such in-depth analysis of companies just like the marketing strategy of Blackrock check out our IIDE Knowledge portal for more fascinating case studies.