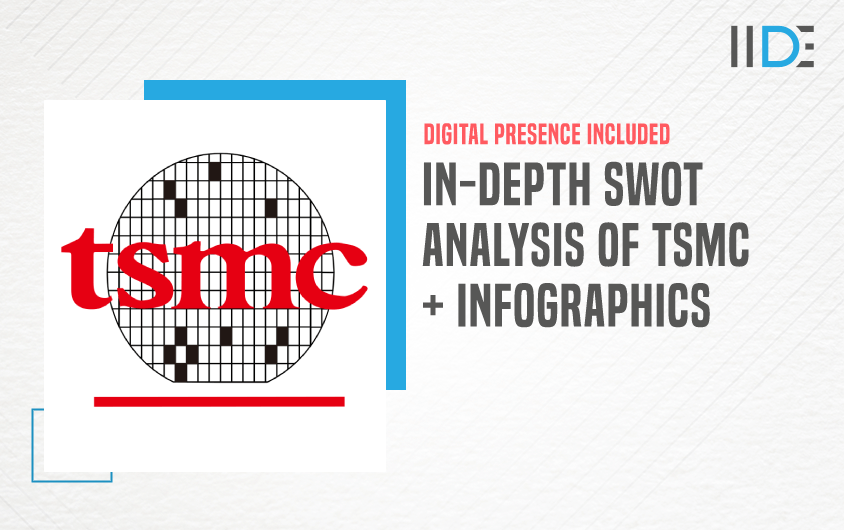 Last time we did a SWOT analysis of Adobe, an American multinational computer software company. Today, we will do an extensive SWOT Analysis of TSMC to identify the company’s performance.

TSMC has a good marketing strategy that focuses on the diversification of its products. Recently, due to Covid-19 world is going online and marketing is also changing. Digital marketing is the new form of marketing and if you are interested in learning new skills of marketing then check out our Free MasterClass on Digital Marketing 101 by the CEO and Founder of IIDE-Indian Institute of Education, Karan Shah.

In today’s blog, we are going to do an extensive SWOT Analysis of TSMC and find out the company’s overall performance. Before we begin our analysis let’s have a look at its founding, products, financial status and competitors. 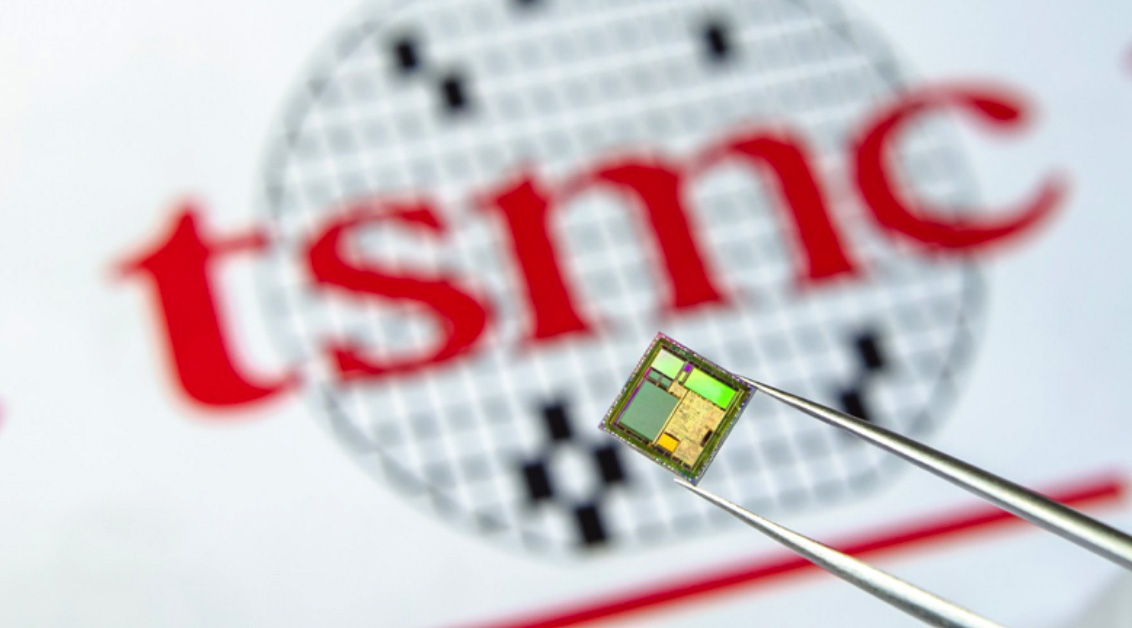 TSMC was established in the year 1987 with its headquarters in Hsinchu Science Park, Taiwan. TSMC pioneered its business model by exclusively focussing on manufacturing semiconductors for its clients like AMD, Apple, ARM, Broadcom, Marvell, MediaTek, and TSMC. Its foundry business model has made it rise globally and it is since its inception that TSMC is one of the world’s leading semiconductor foundries.

TSMC makes semiconductors that are used in a variety of end markets such as mobile devices, high-performance computing, automotive electronics, and the internet of things. This in turn enables TSMC to maintain a higher level of profitability and get healthy returns for future investment.

In May 2020, TSMC set forth to build and operate a semiconductor fab in the United States to support the customers and partners as well as to attract global talent. TSMC has its offices located in North America, Europe, Japan, China, and South Korea. And the company is also listed on Taiwan Stock Exchange. 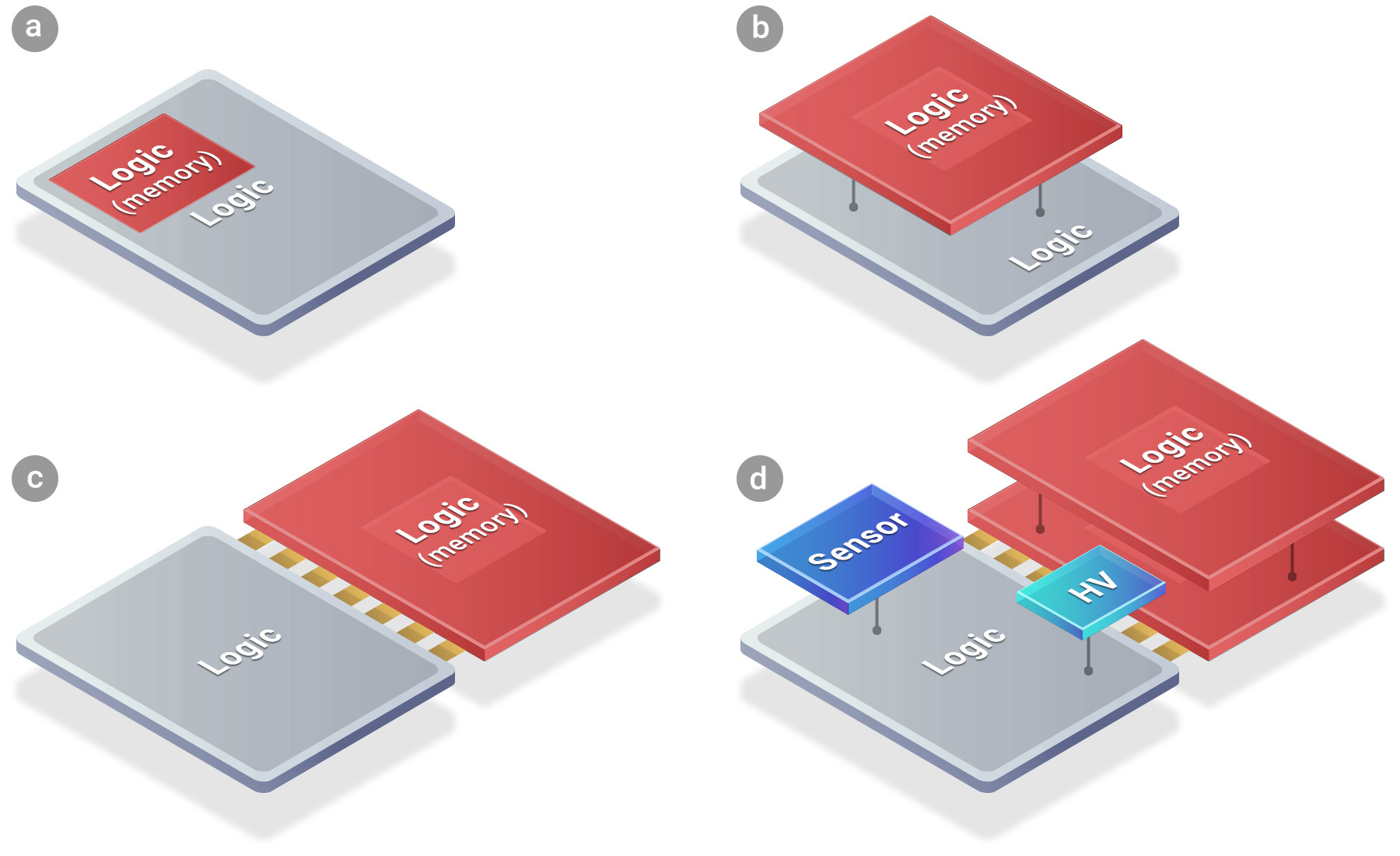 TSMC is competing on a global level with many other well-known companies in the information technology sector. The top 5 competitors of TSMC are

As we discussed the company’s core business, let’s begin with the SWOT Analysis of TSMC.

SWOT stands for Strengths, Weaknesses, Opportunities and Threats. SWOT Analysis is a tool that helps to analyse where the company is performing well, where it lacks, how it can grow in future and what are things it has to beware of. It helps the internal as well as external users to compare the company with its competitors and industry as a whole.

To better understand the SWOT analysis of TSMC, refer to the infographics below: 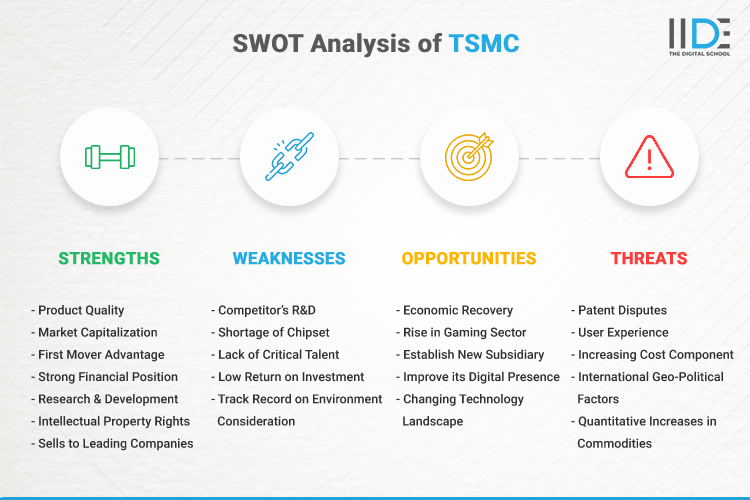 So let us go ahead and first have a glance at the strengths of TSMC from the SWOT analysis of TSMC.

Strengths are the factors that contribute to the success of the company. Strengths are those features and key areas where the company is performing better than its competitors. Following are the strengths of TSMC:

Weaknesses are the characteristics of the company that places it at a disadvantage relative to others. The weaknesses stop the company from performing at an optimum level and become barriers to achieving goals.

Opportunities are the favourable external factors that give the company a competitive advantage to improve its performance and increase profit.

Threats are the unfavourable factors that could harm the functioning of the company.

This ends our SWOT analysis of TSMC. Let us conclude our learning below.

Taiwan semiconductor manufacturing company is one of the world’s leading semiconductor chip foundries. As discussed above the company follows a customer-first approach which aids to the success of the company. Although TSMC faces huge competition from various other companies such as Intel, Samsung, and many others, still TSMC has been continuously making efforts to stay at the top in the IT industry.

TSMC has beaten almost all its competitors and the reason behind this is its effective marketing strategy. Nowadays in this era of digitalization, digital marketing plays a vital role in the success of every company. An organization can win over its customers with better marketing efforts. If you are interested in learning about digital marketing and enhancing your skills, check out IIDE’s 3 Month Advanced Online Digital Marketing Course to know more.

We hope this blog on the SWOT analysis of TSMC has given you a good insight into the company’s strengths, weaknesses, opportunities and threats.

If you like to read such insightful and extensive analyses of companies just like the SWOT analysis of TSMC then you can find more such interesting case studies on our IIDE’s knowledge portal.

Thank you for taking your time out to read this, hope you found the case study on the SWOT analysis of TSMC informative and insightful. Share your views on it in the comments section below.