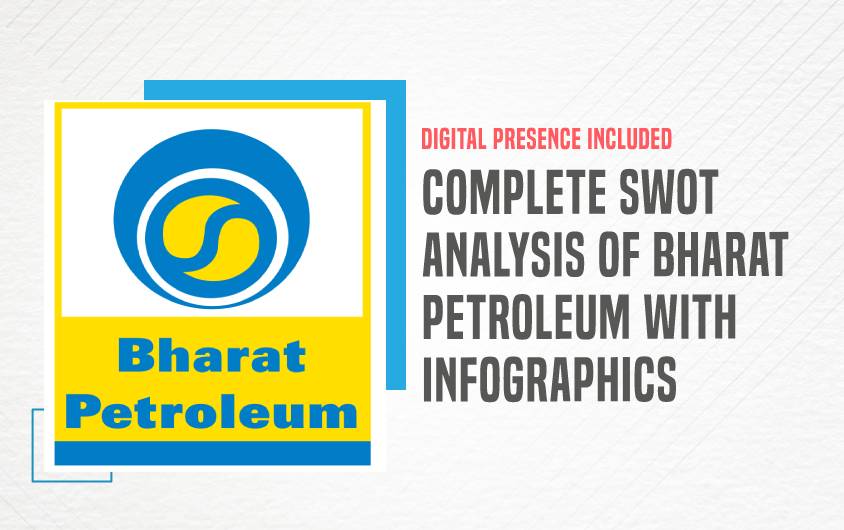 In our previous article, we had done a detailed SWOT Analysis of a famous multinational corporation, Suzuki. In this article, we are going to break down the SWOT analysis of Bharat Petroleum – India’s leading Oil & Gas producing corporation.

Bharat Petroleum is among the top 5 largest Oil & Gas Companies in India. Their multipurpose refineries in Kochi and Mumbai have been serving the nation for a long time. Their consistent efforts and determination to serve people have made them rank in the Fortune 500 Oil & Gas Maharatna PSU in India.

Another attribute that made Bharat Petroleum the giant it is now in its marketing efforts. As the world is moving online, the way marketing is done is changing and if you are interested in learning about the newest – check out our  Free MasterClass on Digital Marketing 101 by the CEO and Founder of IIDE, Karan Shah.

In this blog, we will look at the SWOT analysis of Bharat Petroleum but before that let’s look at some of the facts about the company. 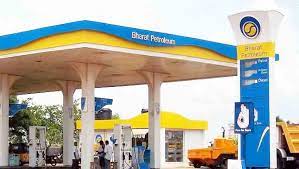 The company’s business has been divided into seven business strategic units like retail, lubricants, aviation, refinery, gas, I&C and LPG. Bharat Petroleum began its operation with the import and marketing of kerosene. Soon the company also took on the challenge to expand its operation and the first drive-through fuel station was built.

Since then, the network of fuel stations has reached the 16,000 mark, with approximately 1 Crore vehicles fueling up every day.

Bharat Petroleum is one of the seven Indian companies to be ranked in the latest Fortune 500 list of the world’s biggest corporations in terms of revenue by acquiring the 358th position and 792nd position on Forbes 2021.

Bharat Petroleum has been in the Petroleum Industry for more than a half-century and deals in:

Bharat Petroleum competes on a national level with other oil & gas producing companies:

Now that we understand the company’s key business, let’s probe into the SWOT Analysis of Bharat Petroleum. 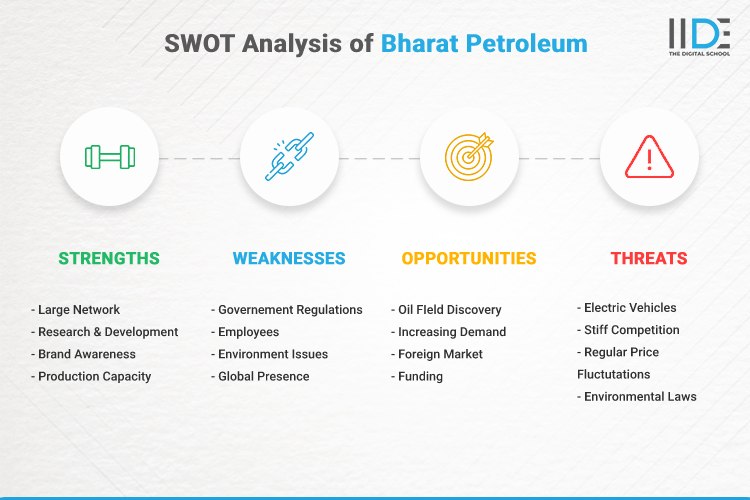 A SWOT Analysis is a simple and effective approach that determines a company’s strengths, weaknesses, opportunities, and threats.

We shall do a thorough SWOT Analysis of Bharat Petroleum to gain insights into the internal and external factors that are favorable and unfavorable for a company.

The framework is considered persuasive support for decision-making because it allows an organization to unwrap opportunities for success that were formerly unarticulated and bring out threats before they become overly troublesome.

Strengths for the company are the areas where the company is performing well which are helping them to outplay its competitors, thus increasing the market share. Following are the strengths of Bharat Petroleum: 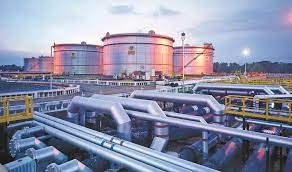 The areas in which the company is performing low are said to be its weakness. The management can take crucial steps to eliminate its weaknesses. Bharat Petroleum’s major flaws are as follows:

Opportunities are favorable external factors. The company needs to grab the opportunities that come its way to gain a competitive advantage.

Threats are the challenges for the company which can stop the company from meeting its objectives in the long run.

Bharat Petroleum is one of the leading corporations in the petroleum sector in India. In the SWOT analysis of Bharat Petroleum, we observed that the company has made a presence across the nation and its brands are well established in the market. The company regularly faces challenges with the increase in the number of competitors in the same space.

With increasing awareness of the customers upon the use of electric motors and appliances, the company needs to expand its services and grow it using better marketing efforts. In a changing world where digital marketing is of supreme importance, being well informed in the field is a must for all marketing passionates. If you are eager to learn more, check out IIDE’s 3 Month Advanced Online Digital Marketing Course to know more.

If you like such a thorough analysis of corporations, find more such intuitive case studies on our IIDE Knowledge portal.

Thank you for spending some time with us, do share your opinions on this case study in the comments below.