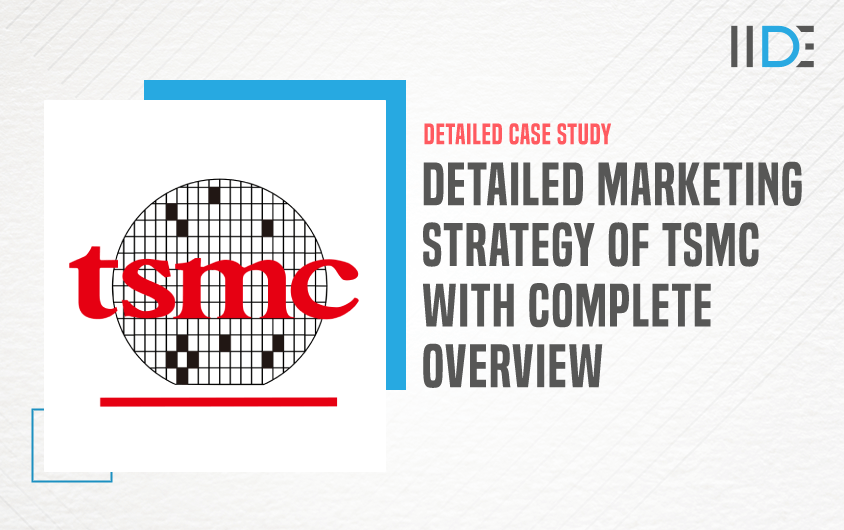 The goal is to offer you information on TSMC’s evolution from a contract manufacturer of semiconductors to one of the largest manufacturers of custom chips worldwide.

Marketing is an essential component of a business that can either make or ruin it. Marketing has shifted to the digital environment along with users from all around the world. Check out Karan Shah, the CEO and founder of IIDE’s Free MasterClass on Digital Marketing 101 if you’re interested in new-age digital marketing.

In this blog, we’ll go through every aspect of the marketing strategy of TSMC. Let’s start by studying the company’s history, target market, and online presence before we delve in deep.

The majority of the top fabless semiconductor manufacturers, including AMD, Apple, ARM, Broadcom, Marvell, MediaTek, Nvidia, and rising firms Allwinner Technology, HiSilicon, Spectra7, and Spreadtrum, are clients of TSMC. TSMC is actually in line with the greatest manufacturers in the world and might signal a turning point for the business because it will no longer just rely on wafer sales to generate revenue.

Automotive electronics, high-performance computers, mobile devices, and the internet of things are just a few examples of the end markets where TSMC’s semiconductors are employed. As a result, TSMC is able to keep its profitability at a higher level and earn respectable returns on its investment in the future.

In order to service its clients and partners, as well as to draw in top talent from across the world, TSMC began construction on a semiconductor fab in the United States in May 2020. North America, Europe, Japan, China, and South Korea are all home to TSMC offices. Additionally, the business is listed on the Taiwan Stock Exchange.

The primary target market is businesses that need chips for their products. Based on different demands, traits, or customer behaviour, TSMC can divide the big market into smaller parts. TSMC, a semiconductor manufacturer, may segment customers based on a variety of factors, including location, demographics, use, user status, and attitudes.

Semiconductor TSMC must select one or more target segments once the total market has been segmented into numerous groups. Since the goods can only give certain value propositions, the key is to avoid trying to be everything to everyone. The worldwide market business that needs chips for their products is the marketing strategy focal goal of TSMC after the identification of several sectors based on various parameters. Because of their motto, they focus on semiconductor products that can be fit for international business. Their chip is mainly targeted for all age groups according to the requirement.

Positioning is a crucial step in establishing your own distinctive and exclusive niche in this market. The positioning of TSMC’s brand and product in its market through its marketing plan will be beneficial going forward. The placement of TSMCdepends on several variables, including the position’s relevance and TSMC’s corporate image.

Determine the competitive advantage or distinctive value proposition that will place the brand in consumers’ minds. Perceptual maps may be created by marketing managers at Semiconductor TSMC to better comprehend the market placement of distinct companies. Lastly, utilizing the marketing mix and promotion mix, position the brand as a provider of higher value to the target category and successfully communicate this position to customers.

In order to strengthen its footprint in India and other international nations, TSMC can run these commercials and other media initiatives.

TSMC is more active on LinkedIn than on other social media platforms like  Facebook, and Twitter. They are not active on Instagram. It has more followers on LinkedIn than on Facebook and Twitter. LinkedIn is more of a professional sort of social media so the range of followers is around 340k-350k and due to low activity on Facebook and Twitter the range of followers is around 2k-3k and 7k-4k. The posts on LinkedIn contain mostly promotional and informational content along with some posts related to their new product launch. 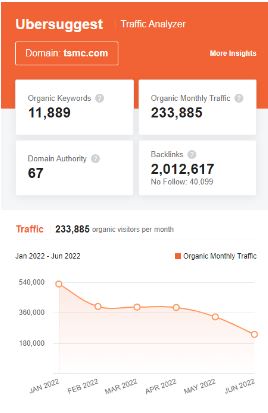 According to SEO rankings,  it is said that having fewer than 500 keywords is bad, having more than 1000 is good, and having more than 10,000 is amazing. As can be seen, https://www.TSMC.com has 11,889 organic keywords, which is a high number. This indicates that TSMC’s digital marketing is getting a significant amount of insights.

Additionally, the monthly traffic is known to be typical at 200K+. Therefore, TSMC has solid SEO tactics that are sufficient to keep the brand climbing the Google organic SERP rankings.

Influencer marketing, in which companies and influencers collaborate, maybe a potent tactic for advancing enterprises. Since more than ten years ago, hundreds of businesses and brands have used it effectively, and the number continues to rise.

TSMC is a semiconductor manufacturing company that produces chips as per contracts around the world. So for their marketing purpose, they haven’t collaborated with any influencer to promote the product for now.

As a company that produces semiconductors in a huge mass for businesses that need chips for their product,  TSMC does not sell any products on its website, only updates its information about its invention and so does not make use of the e-commerce strategy.

TSMC is very active on LinkedIn.The post content is related to their new products, innovation, awareness, etc. The only source of posting content is LinkedIn. Additionally, they provide press releases regarding their product through a variety of channels, including their main website, CNBC News, BBC News, etc.

In the marketing strategy of TSMC, we could see that the company was gathering admiration and support from all around the world. Thanks to technological advancements, its chips are becoming more and more well-known worldwide.

Even if TSMC’s digital marketing strategies need improvement, the company is still working to develop and expand its presence online. In the present business environment, marketing is a crucial component of every company’s operation. The industry is quickly going digital.

If you like such in-depth analysis of companies just like the marketing strategy of TSMC check out our IIDE Knowledge portal for more fascinating case studies.