We will help you learn valuable and previously unattainable insights on TJ Maxx. A leading off-price retailer of apparel and home fashions worldwide, with nearly 4,700 retail locations across 9 countries on 3 continents.

If you have ever wondered why marketing is so crucial? Imagine this scenario: If you opened the best cafe in town, but it only drew a small amount of footfall? What if you introduced a fantastic product but nobody noticed it?

The point is made. Starting a business is the first of a long series of steps. Attracting clients is the key to building a business, which demands excellent marketing. If you’re curious then IIDE’s Free MasterClass on Digital Marketing 101 is a good place to start. Check out our IIDE’s Free MasterClass on Digital Marketing 101 by our CEO and Founder of IIDE, Kaan Shah.

So let’s dive into the marketing strategy of TJ Maxx but like any other movie, a short backstory, let’s go…. The brand named TJ MAXX was founded in 1976 in Framingham, Massachusetts, by Bernard Cammarata and the Zayre chain of discount department stores. In December 1988, a restructuring plan named “TJX Companies, Incorporated” was announced by Zayre. This company bought Marshalls in 1995. In 1998, TJ MAXX unlocked the store chain, AJ Wright. Unfortunately, it closed in January 2007.

In 2009, it came up with an e-commerce site. Gradually, it increases the range of products and accessories. Soon TJ Maxx became the United States’ largest off-price retailer of apparel and home fashions. In countries like the UK, Poland, Netherlands and Germany – TJ MAXX is known as TK MAXX.

TJX is one of the main organizations in its industry. Also, it maintains its dominant position in the market by critically analyzing and reviewing the SWOT analysis of TJ Maxx. This interactive process requires effective coordination among various departments within the company such as marketing, finance, operations, management information systems, and strategic planning.

Now after a small detour let’s learn about the marketing strategy of TJ Maxx! We are here for that…right?

TJ Maxx knows exactly who its customers are. It’s a woman between the ages of 25 and 54 who has a middle to upper-middle income, is fashion and value-conscious, and shops a variety of retailers, both online and in-store, from department and speciality stores to mass merchants. You can see how specific the target audience is, you can literally imagine it right now.

TJ Maxx divides its clients into segments based on the above-mentioned target consumer. Therefore they segment by age, gender, income, and fashion consciousness.  In one of their advertisements, a younger woman who buys for TJ Maxx is shown shopping in high-end fashion stores and runway events for the newest fashions at the best prices. This demonstrates that they are aiming for younger ladies who are fashion-conscious.

TJ Maxx shares the mindset that department stores are generally overpriced and there is a place where it could potentially be found for a cheaper price. Because of this, TJ Maxx positioned itself as a place wherein clients know that their money is well spent and that they haven’t been cheated. 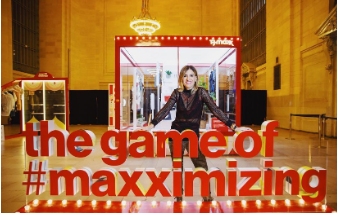 T.J. Maxx, in 2019, debuted a new multi-city interactive game built around the idea of “Maxximizing,”, a word used aggressively in the brand’s messaging to convey that shoppers don’t need to sacrifice quality or price to find the right items.

In this campaign, T.J. Maxx partnered with five “tastemakers”, aka top celebrities, and influencers, on different product installations in New York City and Los Angeles. Like Maxximize Your Style curated by actress Hannah Simone, Maxximize Your Vacay curated by lifestyle blogger and mom Rachel Choy, etc.

It was a clever and highly-engaging brand experience for people and it combined real life with social media by the hashtag #maxximizing. The campaign increased loyalty to TJ Maxx and sales rose by 7%.

In 2021, TJ Maxx partnered with famed actress and musical artist Brandy and its sister brands, Marshalls and HomeGoods to launch #SnowballFightAgainstHunger, a virtual snowball fight taking place on TikTok in December. For every use of their snowball-themed effect, they donated $1 — the equivalent of at least 10 meals to Feeding America, the nation’s largest hunger-relief organization, helping millions of families across the U.S. this helped raise awareness and goodwill of TJ Maxx. The TikTok reel effect went viral too. 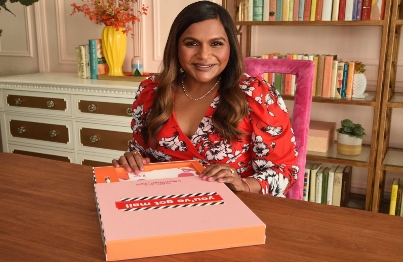 T.J.Maxx launched a purpose-driven initiative, The Maxx You Project to empower women. Under this initiative, in 2021 TJ Maxx launched a campaign, The Change Exchange. It partnered with actor and New York Times best-selling author Mindy Kaling for the same. Here Two lucky participants will have the chance to become surprise pen pals with Kaling. Seeing the success of the campaign, they went further and donated $100,000 to the not-for-profit organization Dress for Success. The objective of the campaign was to reinforce the positive image of TJ Maxx in their consumer’s minds. 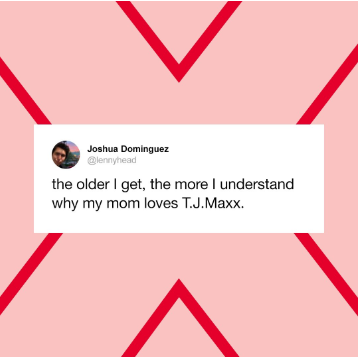 TJ Maxx is active on social media mediums like Instagram, Twitter, TikTok and Facebook. TJ Maxx is more popular on Facebook with 3.2 M followers, followed by 1.4M followers on Instagram and 349.1K followers on Twitter. Seeing the audience that uses Instagram and Facebook, TJ Maxx has worked more on these social media as it fits perfectly with its target audience.  But TJ Maxx is very inactive on Linkedin, with no post made till now. Most of the posts are promotional and informational in nature. It also shares memes on its social media, to connect with the young generation.

It has monthly traffic of 7,572 which is average. It has an amazing off-page SEO with 1,227,683 backlinks and a domain authority of 69. But TJ Maxx has to considerably work on its on-page SEO practices as in today’s world SEO is a vital ingredient for a brand to survive. 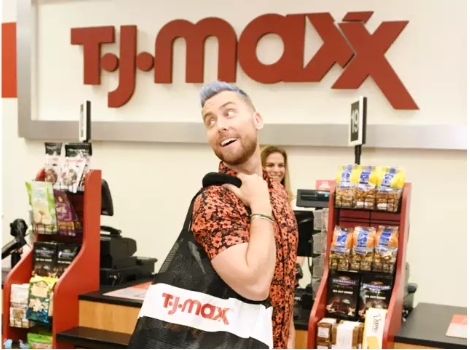 TJ Maxx has actively collaborated with many actresses, celebrities, influencers, etc for their marketing campaigns. These influencers have a very huge fan following and help promote TJ Maxx’s popularity, sales, and goodwill too. They even leverage their celebrity client base which includes Taylor Swift, Prince Harry, Lance Bass, and Britney Spears, among others. 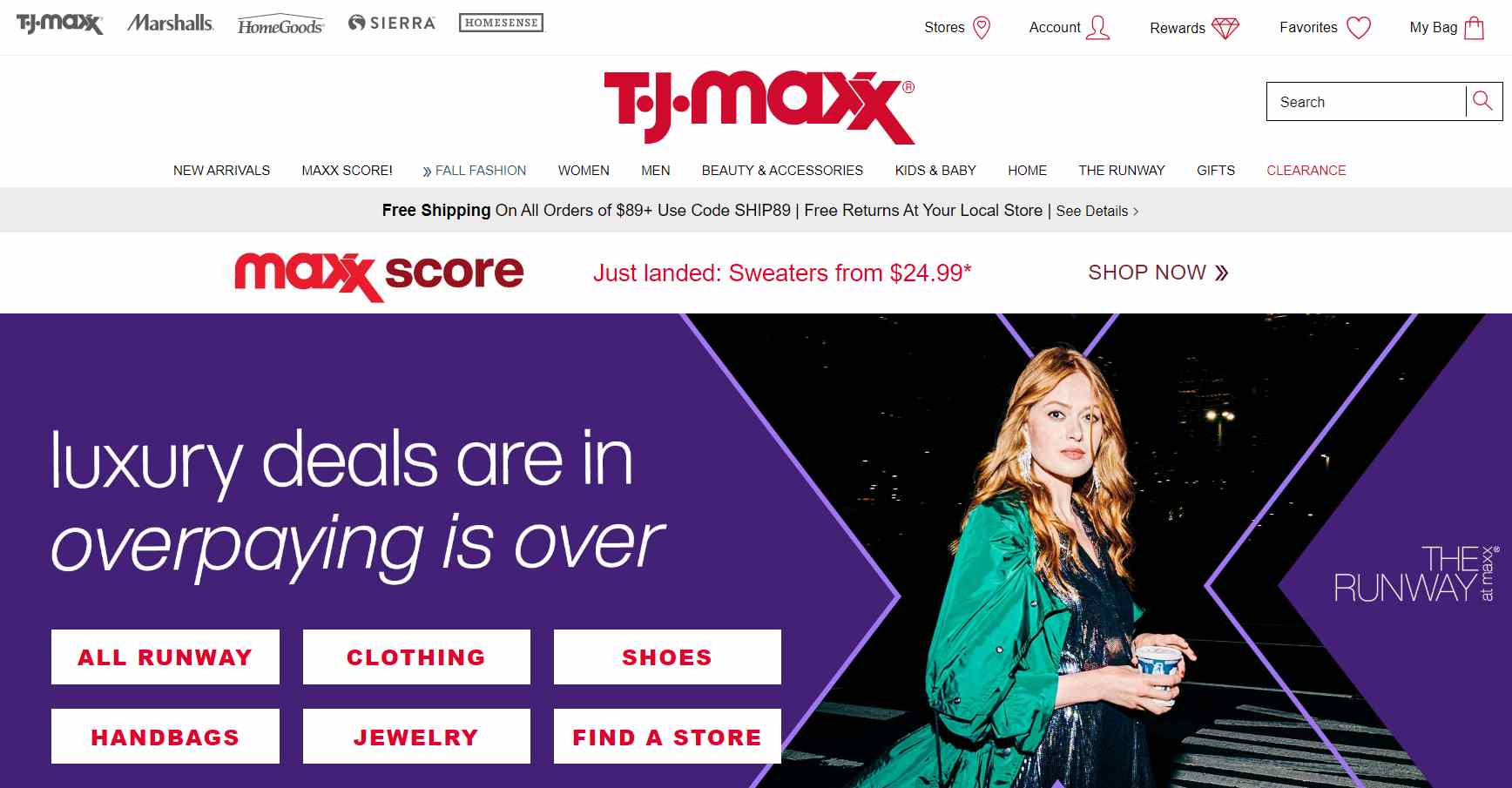 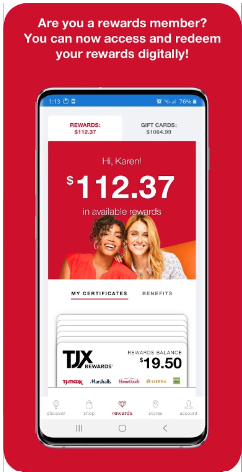 It has its mobile app with the same name. It can be downloaded from the google play store and apple store. But the app functionality has to be worked on. The app crashes a lot and the screen becomes unresponsive too. The reward system is not working as well.

TJ Maxx should look into this on an urgent basis as it way hampering the loyalty of its customers, which it has earned over years.

TJ Maxx has been active on social media, especially on Facebook and Instagram. The content is based on information on its new product arrivals, marketing campaign, etc. Their press release is based on safety advisory, financials, changes in company structure, etc. Mostly the press release is targeted toward investors.

So we took a 360° tour of TJ Maxx’s amazing marketing strategy. It has done an amazing job in knowing its customers inside out and successfully engaging with them through celebrity endorsements, social campaigns, etc. Though it lacks on-page SEO, mobile app functionality, and using Linkedin, it can easily work on it and achieve even greater heights.

It can not be further emphasized the importance of Digital Marketing in this competitive world. It can make or break a brand, where the customers are increasingly going digital. No company wants to be left behind and is turning digital. They are actively looking for Digital Marketers who can guide them in their digital journey and it has created an amazing opportunity for you to tap into.

If you like such in-depth analysis of companies just like the marketing strategy of TJ Maxx check out our IIDE Knowledge portal for more fascinating case studies.