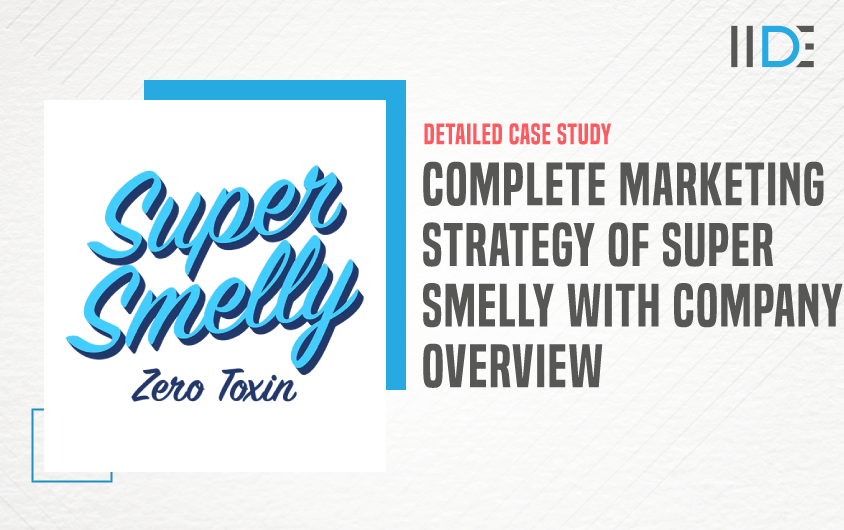 The SWOT analysis of India’s first and only toxin-free personal care brand, Super Smelly, was discussed in a previous article. In this blog, we will discuss the marketing strategy of Super Smelly in detail and dig deeper into its content.

The goal is to discover more about Super Smelly and how India’s first and only toxin-free personal care brand has become the most important force in beauty and personal care retail.

Online platforms have been used to leverage social media influencers for brand promotion. Digital marketing is evolving, and if you’d like to keep up with the current trends, check out the CEO and creator of IIDE, Karan Shah’s Free Master Classes on Digital Marketing.

We’ll learn all about the marketing strategy of Super Smelly at the end of this post. Let’s examine the company’s history, target market, and online presence. 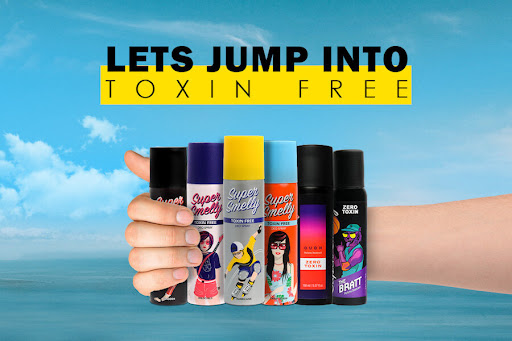 In 2018, founder Milam Sharma and co-founder Dipali Mathur launched Super Smelly in New Delhi. Super Smelly focuses on furthering the toxin-free movement, building a rising future for the next generation. The brand makes natural and fun-to-use products through multiple path-breaking skincare formulations that are both effective and safe for young skin and capable of cracking even the toughest teenage skin.

Being a pioneer in toxin-free products, Super Smelly has created a strong foothold in this category. With a deep understanding of generation Z and its needs, the youth-oriented brand is trying to solve the problems. The company is committed to listening to its customers’ problems from the brand name to packaging, to the next product launch, and everything in between.

Products are available on e-commerce platforms including Amazon, Flipkart, Nykaa, and Bigbasket. The brand is currently stocked across 250 outlets in Delhi-NCR. Super Smelly is targeting youngsters between the ages of 7 and 19 years of age. Its product range features deodorant sprays, cream sticks, face washes, pocket perfumes, lip balms, and shower gels.

By taking the digital route, India’s first and only 100% toxin-free personal care brand, is planning to roll out pan India and also expand to the Middle East, the UK, and the US.

The Marketing Strategy of Super Smelly

Gen Z, or people born in the 1980s and 1990s, is the primary target market. Products for this age group are the focus of all product development efforts. Safe Cosmetics Australia has certified the products as “Toxin-Free” and “Made Safe,” as well as undergoing clinical and dermatological testing. In addition to being certified “Vegan,” most of the products are also free of animal testing. Teens and tweens are targeted by the brand in their formative years when they are growing to think for themselves about their body image and individuality. It hopes to bring about a revolution through items that encourage people to feel empowered and intelligent.

With its use of bright colours and humorous images, Super Smelly appeals to both men and women in Generation Z. If you wanted to describe Super Smelly’s personality in one word, it would be “funny.” Product packaging varies—products aimed at women feature pinks and floral elements that correspond to gender norms. Male-targeted products, on the other hand, are distinguished by more rough blacks and greys.

“Super Smelly” established itself in the market as India’s first and only deodorant spray that is free of toxins and entirely safe for use. You read that correctly: no parabens, zinc, aluminium, triclosan, phthalates, or polyethene glycol.

So far, Super Smelly has only had two campaigns. Their strategy mainly focuses on influencer collaborations, wherein they promote the product on their official social media accounts and provide good customer reviews that encourage more people to buy the product. The two campaigns that Super Smelly launched are discussed below. The #SuperGenZ campaign has been initiated by the personal care business Super Smelly, which caters to Generation Z. The purpose of the social media campaign is not only to raise awareness of the brand but also to provide adolescents, preteens, and young adults with the information and knowledge they require to succeed in their personal care routines. The goal is to establish ourselves as the authoritative voice of Generation Z, to serve as the driving force behind their ascent, and to make it possible for them to savor the best years of their lives without the burden of worrying about their care. Three million people are expected to hear about Super Smelly’s products, campaign, and brand through these ads. The campaign began in the first week of September 2020 and will run till the end of the year.

Concerning personal hygiene, the Millennial generation has a brand of toxin-free products that can alleviate their concerns. This is what the meaning of #SuperGenZ is all about. They’ve chosen the slogan “Not for DadZ, not for KidZ, super stinky’s for Gen Z.” 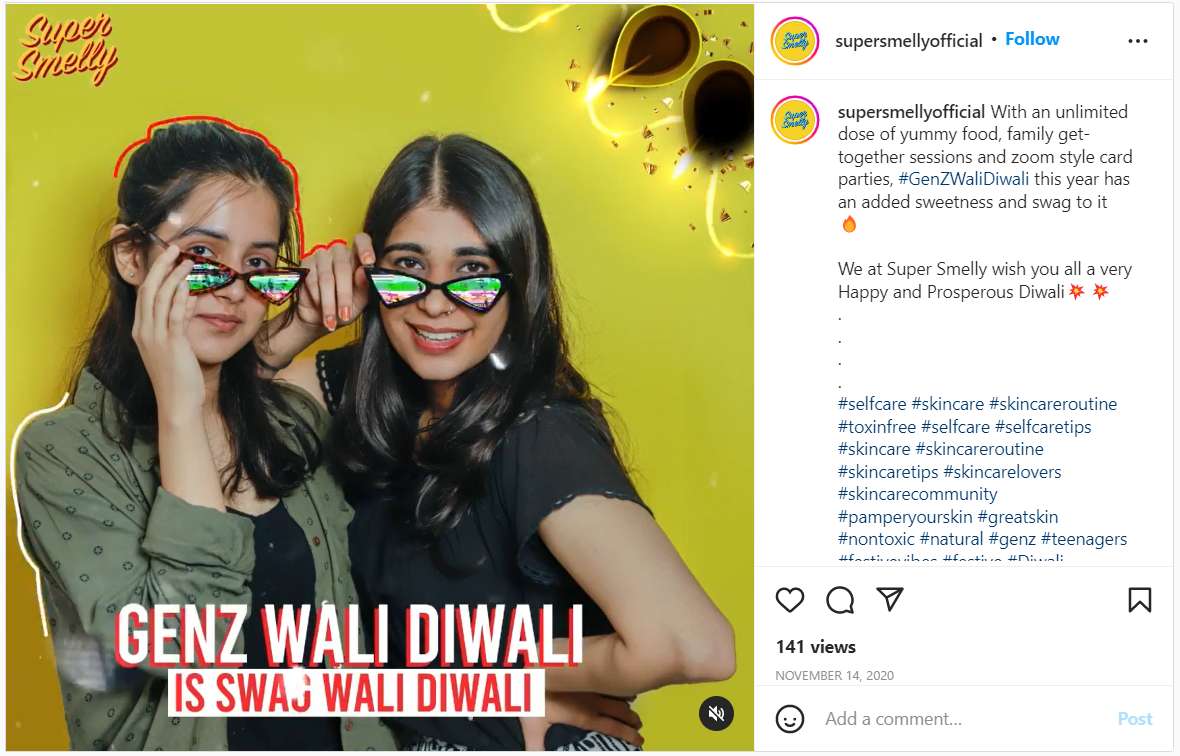 The #GenZWaliDiwali campaign will be launched under the #SuperGenZ umbrella to honour the particular festive spirit and ideas of GenZ. This generation is more sensitive toward animals and the environment, which puts cracker burning out of the question. They believe in diversity and do not ascribe religion to the holiday. For them, Diwali is about interacting with their friends and family and celebrating by engaging in home décor and house parties. #GenZWaliDiwali will then showcase the new concept of festivals through social media activations and films.

Over 33.7 thousand people are following Super Smelly on Instagram, where the brand is very active in advertising. In addition, they promoted the event on LinkedIn, a social networking platform that caters primarily to professionals and people in business and has 616 connections. The articles’ content has been developed to enhance Generation Z’s knowledge of the significance of maintaining proper personal hygiene through online distribution. They went all out on influencer engagement and social media marketing by developing ties with popular YouTubers and Instagrammers to keep the momentum they had built up in the previous quarter. 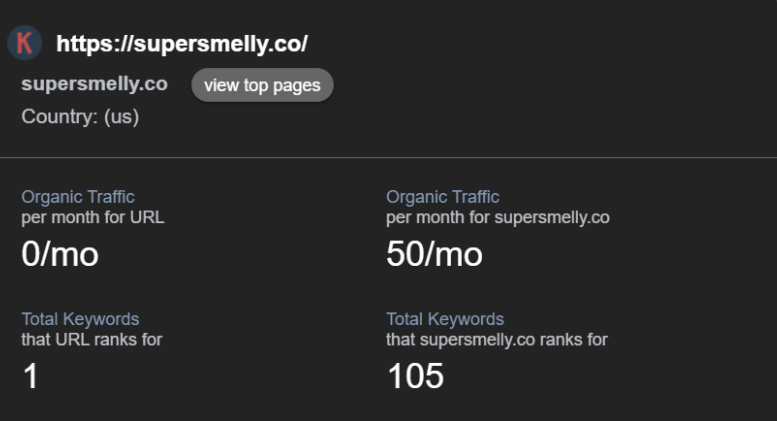 According to SEO ranking, the number of keywords is terrible if it is less than 500, good if it is more than 1000, and spectacular if it is more than 10,000. Based on its 105 organic keywords, “super smelly” ranks poorly in terms of visibility in the search engines. That means that Super Smelly’s digital marketing is missing valuable information.

In addition, there are just 50 visitors every month, which is low. Since Super Smelly’s SEO techniques need refinement, the company must do everything to enhance its SEO ranking and retain its brand at the top of organic Google SERP rankings.

According to Dipali’s press release, Super Smelly is working toward a “digital-first focus.” It has been recognized as driving the personal care brand’s meteoric rise in popularity among India’s Gen Z consumers.

More than a thousand more influential people, including Karan Tacker, Sanjana Sanghi, Alaya Furniturewal, and Harleen Sethi, have collaborated with the company. Their Instagram page also includes memes of the world’s most famous people, such as Kim Kardashian, Pete Davidson, Megan Thee Stallion, and Elon Musk, encouraging more people to purchase their products.

The company’s name is gaining popularity at a rate of seventy percent each month. Super Smelly products can be bought from the official website of Super Smelly.

It may also be bought on popular e-commerce websites, including Purplle, Nykaa, SMITTEN, Bigbasket, Amazon, and many others. Several modern trade merchants in Delhi stock it, including Modern Bazaar, Krishna Mart, and WHSmith, to name just a few. In addition to serving consumers in the United States and Great Britain, they also serve customers in other countries.

Currently, Super Smelly does not have a mobile app. It would be great if they would launch a mobile app. In this way, consumers can order products directly through the app.

There is a consistent promotion for Super Smelly across various social media platforms. The content discusses recently released items, promotions, brand awareness, and other topics relevant at this time, such as current trends. LinkedIn and Instagram are the two active platforms on which content can be posted and shared. The most distinctive aspect of their approach was that it perfectly matched their slogan, which read, “Being Super, naturally.” They feel that there is no definitive definition of what it means to be “great,” so they enlisted the help of social media influencers who are kind, fearless, self-assured, and forthright.

Gen Z’s marketing strategy for Super Smelly is significantly impacting the industry. Its popularity is increasing worldwide, not just in India. Because they are the first and only toxin-free personal care brand in India, they have less competition. SEO rankings may be lacking, but Super Smelly is still trying to grow and evolve in the digital industry.

Covid-19 paved the way for a nimble-minded approach to marketing. The good news is that the crisis has resulted in a long-term shift toward a focus on marketing flexibility. For the benefit of the entire company as well as the marketing department, this includes creative digital content, constant consumer listening, and demand sensing.

If you like such in-depth analysis of companies just like the marketing strategy of Super Smelly check out our IIDE Knowledge portal for more fascinating case studies.