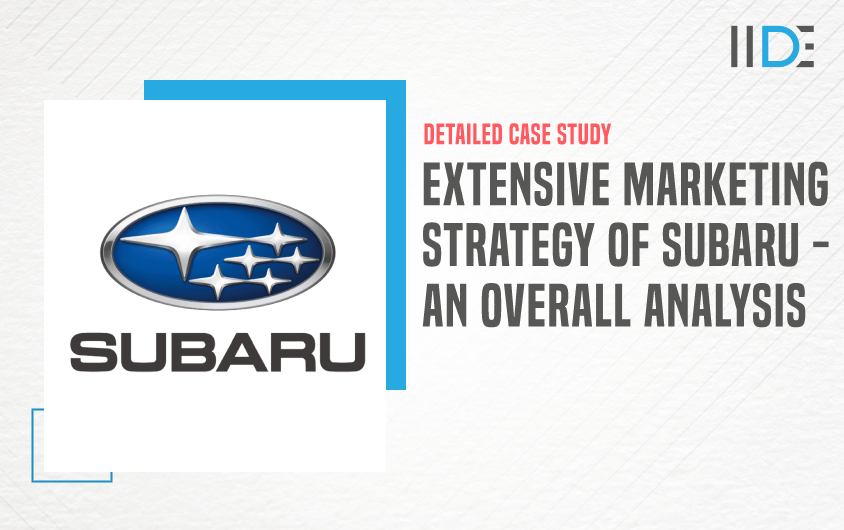 In our previous article, we learnt in detail about the SWOT analysis of Subaru. In this article, we are going to elaborate on the extensive marketing strategy of Subaru.

Subaru is a worldwide transportation producer with two principal organisations: vehicles and aeroplanes. Subaru began as the Nakajima Aircraft Company, established in 1917.

By 1953, when we set out on another beginning as Fuji Heavy Industries, their car division had developed into its main impetus. It was the twenty-third largest automaker in the world in terms of output in 2020.

It has been successful to hold its position in the industry. It can still try to improve its standings in the global market with the use of the latest digital marketing techniques. Most people have entered the digital world and thus it is easy for any company to find its target audience in the market.

Thus every business needs to implement digital marketing. If you are anxious about learning what digital marketing is and how to use it to your advantage – check out our Free MasterClass on Digital Marketing 101 by the CEO and Founder of IIDE, Karan Shah.

Now let’s look at the history of the company, its founders, financial situation, competitors, and products before we go into the marketing strategy of Subaru.

The firm was renamed Nakajima Aircraft Company, Ltd. in 1932, and it quickly rose to prominence as a significant aircraft producer for Japan during World War II.

At the time, Kenji Kita, the CEO of Fuji Heavy Industries, wanted the new business to be involved in automobile manufacture; therefore, plans to build a car with the development code-name P-1 were quickly put in place. When Kita polled the firm for ideas for naming the P1, none of the suggestions was particularly intriguing.

The Marketing Strategy of Subaru

Customers are divided into categories through segmentation, and these groups may respond differently to the 4Ps of the marketing mix (price, promotion, product, and price). The most basic segmentation methods include age, income, demography, gender, and stage of family life.

Subaru is the prime manufacturer of luxury cars, and makes many varieties of cars, each with a different style and looks. Each Subaru product is further subdivided into different subcategories, such as the premium model and limited model with varied features. Also, each product in the same category has a different price. Subaru also manufactures cars for motorsports and racing events. In such cases, they modify their existing catalogue of products with a new look and add enriched power and performance. It manufactures cars with diesel engines, petrol engines, and electric engines.

The brand has segmented the market based on customers’ having higher purchasing power, diversity, and being well-educated. They are also called “perfect consumers.”

Subaru centres around more youthful singles or couples in metropolitan regions. They have youngsters or might want to have them soon for eg – outdoor enthusiasts and millennials.

Subaru is primarily interested in releasing vehicles with sporty aesthetics and designs. Therefore, its target customers are into sports.

One segment of Subaru’s target audience is parents. A big concern for parents is safety. They’ve created advertisements that speak directly to this issue. For instance, one advertisement demonstrated how their DriverFocus Alerts prevented a collision for a young woman. This gives Subaru vehicles a sense of security, which parents find appealing.

They also produced advertisements for families and others who enjoy outdoor adventures. No matter if they have a family, a pet, etc., it appeals to individuals who want to enjoy nature.

In today’s tough market, brand positioning and value proposition positioning are essential for commercial success. Subaru positions its products in such a way that it creates a distinct image and provides a specific identity/reference point for the product and services in the customer’s mind. The direct connection to customers provided by e-commerce and other online retailing tactics, brand positioning and product differentiation is now more important than ever.

Subaru has decidedly and concisely referred to its vehicles and its clients’ needs and values. It’s supported by Subaru’s advancement in development, execution, security, innovation and remarkable worth.

The theme of the campaign is to show love and respect to all people in every interaction with Subaru. “Love is now bigger than ever”.

Subaru understood that to succeed, it needed to cultivate a dedicated client base. They produced several advertisements using their “love campaign” to engender an emotional connection with their viewers. The campaign’s slogan was “Love.” It distinguishes a Subaru from a Subaru. They emphasise the notion that Subaru treats its cars with the same care that people do for their daily lives. The advertisements emphasise life and love rather than facts or specifications.

For the car brand, this campaign was tremendously successful. Up to that point, their finest sales month had just passed. Their sales increased by a whopping 28 per cent over the prior year, the most growth of any automaker.

Subaru’s prominence was because of a canny promotion that thought about addressing individuals rather than buyers.

At a time when few businesses would accept or even acknowledge their LGBT clientele, it did so. People who worked on Subaru’s 1990s marketing campaign frequently mention how different the atmosphere was in those days.

It’s no secret that Subaru supports the LGBTQ+ community. Subaru has taken significant action to demonstrate its support, including sponsoring pride parades, joining forces with the Rainbow Card, a credit card that offers donations to gay and lesbian causes instead of cashback, and hiring Martina Navratilova to appear in commercials. These significant actions, while other businesses remained mum about their stance on the community, have helped to build and maintain lesbian support for Subaru. 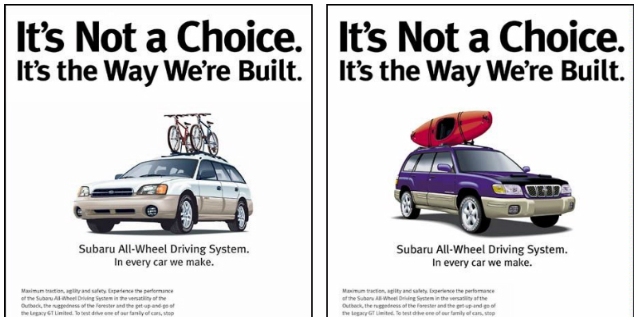 Subaru is also active on LinkedIn and Twitter. Subaru is the most followed on Instagram. The types of content that Subaru mostly uses are promotional and product launches on social media. 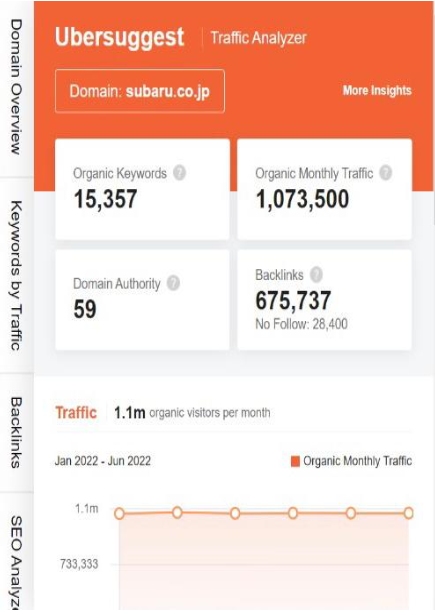 The website – above 20000 visits a month is good. As the result shows, Subaru has 1,073,500 organic monthly traffic, which is an amazing number. That means that more than a million people visit Subaru’s website every month.

All lifestyles and adventures can be accommodated by a Subaru vehicle. Picking up its social media was one of the brand’s best marketing decisions. They conducted a “Meet an Owner” influencer campaign in 2017.

Twenty YouTube and Instagram influencers worked with the brand. Regarding Subaru models, each influencer produced user-generated material. The influencers came up with a tonne of interesting, appealing posts.

Subaru developed the MeetAnOwner.com landing website in conjunction with the campaign, which features testimonies from Subaru owners and influencers. Additionally, the website linked potential and present Subaru owners.

Subaru of America saw great success with the campaign. It received 58 sponsored Instagram posts, which brought in close to 2 million likes. It received 2.5 million views and 5% engagement on YouTube. Thanks to social media, Subaru was able to interact with its target market and increase brand recognition.

Subaru used Devin Graham and Zack King as two key influencers. Since Subaru faces competition from many other automakers, it must engage in emerging markets. Subaru chose Zack King, a professional photographer with 24.2 million followers, to connect with a more sedate and creative consumer who does not have to be a Subaru customer. Subaru discovered that Devin Graham, who has a YouTube follower base of 6.14 million, had significantly increased the sales of all the marketing projects he has previously taken part in.

Subaru has maintained a strong marketing strategy since the start of its inaugural “Love campaign.” They rely on data to know who their target market is and how to best connect with them.

Of course, they keep track of demographic information. However, they also look for information on how their brand and cars are perceived by consumers. They use actionable data, such as customer internet browsing patterns, to give the most pertinent information.

The MySubaru app makes owning your Subaru easy by connecting you to your features like remote start, digital service history, vehicle locator, etc.

Whether it’s starting your vehicle from the comfort of your home, scheduling a service appointment, or locating your vehicle, the MySubaru app puts the power of your Subaru at your fingertips.

In the 1990s, Subaru developed its hugely successful “Acceptance Without Limits” campaign. The campaign’s content marketing was created with a few select, small groups of target customers in mind. Once these groups were identified—teachers and educators, medical professionals; IT specialists, people who enjoy the outdoors, and lesbians—the content was tailored to meet their needs and values.

Ad copy for medical professionals highlighted that they could get to the hospital in all weather; for outdoor enthusiasts, the ads underlined Subaru’s capacity to negotiate challenging dirt roads and pack a surprising amount of gear. The advertisements promote Subaru as a firm that embraces and respects lesbians’ lifestyle choices while also portraying automobiles as fitting into an active, low-key lifestyle for lesbians.

“Leave No Trace Centre for Outdoor Ethics”. This campaign produces “leave no trace” videos, blogs and travel opportunities that resonate with the environmental activist/outdoor/liberal segment of the population and has made Subaru the favourite car by far with this target market.

Conclusion – What’s unique about the marketing strategy of Subaru?

In the marketing strategy of Subaru, we saw that Subaru is carrying out digitization in its business by utilising web-based business, online entertainment stages and other computerised advertising channels at its ideal. It is likewise getting new income streams through web-based deal channels.

If you like such in-depth analysis of companies just like the marketing strategy of Subaru check out our IIDE Knowledge portal for more fascinating case studies.