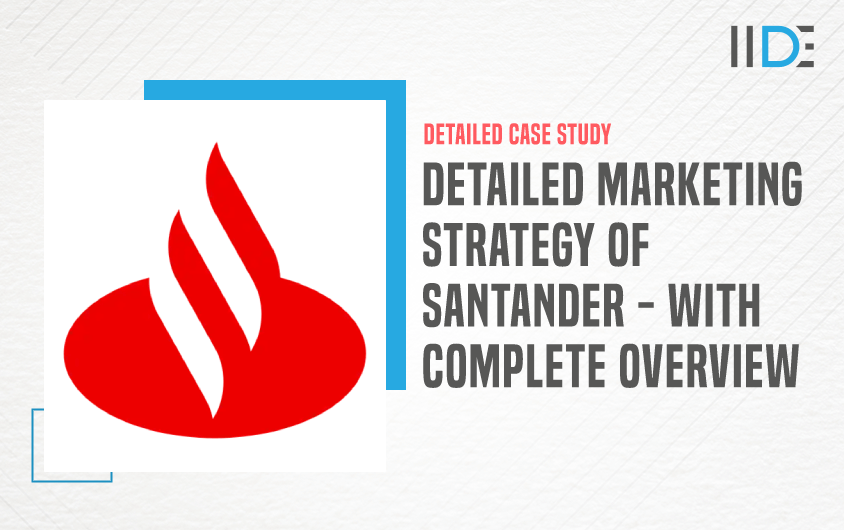 With this blog, you will get an idea about how Santander bank became one of the most trustworthy and largest banks in Spain. Its services are not restricted to Spain, but it is available to various other countries also.

In the world after the Covid-19 pandemic, everything is becoming digital and online. Online marketing is becoming an integral part of every business. If you are keen to learn more about digital marketing then check this Free Masterclass on Digital Marketing 101 by Karan Shah who is the Founder and CEO of the Indian Institute of Digital Education (IIDE). 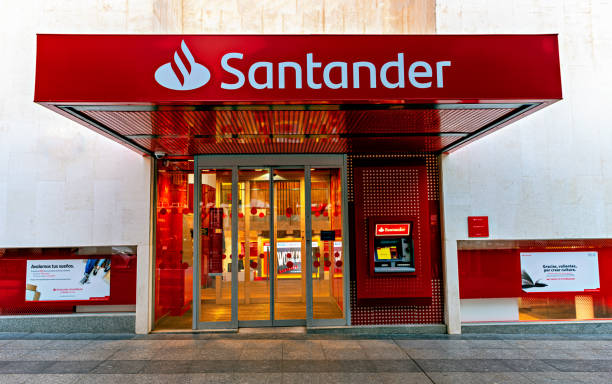 Banco Santander does business as Santander group and is a Spanish multinational financial services company that offers all banking and financial services. It is known for its European Banking operations but also has operations in Northern and Southern America and recently in Asia mainly through its mergers. It was founded in 1857 as Banco de Santander and later in 1999 merged with Banco Central Hispano. It is placed in the 37th position on the Forbes Global 2000 list of the world’s biggest public companies.

Let’s know about the Marketing Strategy of Santander and how Santander carried out its marketing campaigns in Boston.

Market segmentation means dividing the market into various groups according to their needs, behaviours or characteristics.

Santander has targeted mainly large enterprises and individual investors as its potential customers. The major revenue earner for Santander bank is Retail Banking. Retail banking generates 74% of the total profits of Santander bank. Santander operates B2B and B2C mediums because it deals in banking with various business entities as well as personal banking.

The position of Santander in the international banking industry is enormous and it has increased its operations across Asia, Africa, Europe, North America, and Latin America via mergers, acquisitions and subsidiaries. Santander has a widespread distribution channel which includes its 14,392 branches and workforce of about 186,000 employees. Santander has an enormous international presence which includes various countries from all over the world like the United  Kingdom, Hong Kong, Austria, Denmark, France, Finland, Poland, Colombia, Peru, Japan, United States, Singapore, etc. It serves 102 million customers and has also implemented various policies to gain brand awareness. 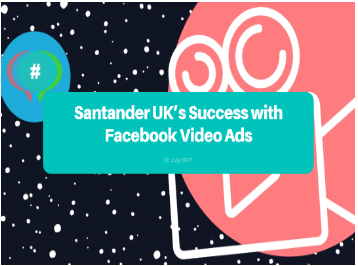 Santander is one of the leading banks in the United Kingdom with 14.3 million active users, from which 6.3 million are digital customers. Santander arrived in the UK market in 2004 and it promised to help people and businesses to prosper.

This campaign was launched in September 2017. It ran across various platforms like television, Facebook, digital display and video on demand. This ad campaign was launched to boost its marketing efforts. To create this campaign, Santander teamed up with Engine– a creative agency and it featured ordinary people doing extraordinary things, thus conveying the message of prosperity to the people.

With this campaign, Santander has focused on its brand awareness, increased the interest of potential customers in its product and also gained loyalty from existing customers.

As a result, this campaign turned out to be successful as it increased the awareness among the people, the customers also had positive responses about the bank and also recommended it to others. 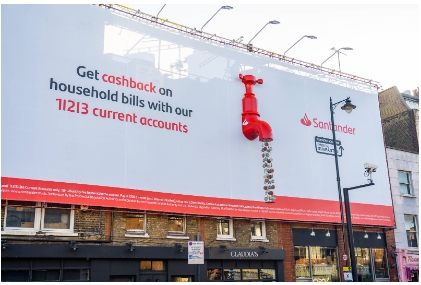 Santander launched the ‘Santander cashback campaign’ in the United Kingdom in November 2021.

This campaign was done to promote Santander’s offer for its 123 Current account holders. The offer was cashback to the 123 current account holders of the bank on household bills such as electricity, water and gas. Santander installed giant taps with coins gushing out of them on billboards in London and Manchester to promote and publicise its offer of monthly cashback on household bills.

The results of this campaign are not available as it is one of the latest campaigns done by Santander.

This campaign helped the bank to boost its business. According to the survey conducted by the bank, 38% of customers loved the bank more because of the campaign. Also, 54% of people loved this campaign. In the history of Santander’s marketing campaign, this campaign was the most successful one. 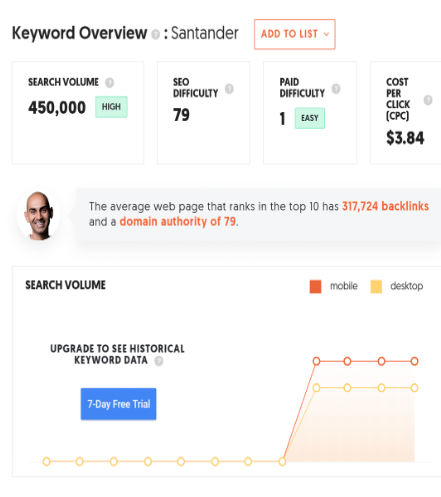 Thus, we can say that the SEO strategies of Santander are amazing as its rank is increasing on Google’s organic search engine results page.

Santander has collaborated with celebrities to promote its product. In 2013, Santander UK made Olympic Gold medalist Jessica Ennis it’s brand ambassador. In 2019, Santander launched a campaign with Ant McPartlin and Declan Donnelly. Santander teamed up with these celebrities to make its brand famous in the banking industry.

As the pandemic struck the whole world and made people get locked up in their houses, people started using online platforms. After the Covid-19 pandemic, almost every business became digitised.

Santander also entered the digital market. It redesigned its software and modernised its account opening procedure. This made the consumer experience smooth and they were able to deliver services effectively. As Santander got its services digitised, it also launched its Mobile app. This app can be downloaded from Google Play Store and it is compatible with android as well as iPhone, iPad and iPod touch. The application is free to download.

Santander is one of the largest banks in Spain. It has done marketing via various means. Santander is also actively posting about its new launches, campaigns and services on its social media platforms. It also releases awareness posts and videos about its brand.

Santander has also collaborated with celebrities to enhance its brand value and position in the banking industry. These collaborations helped it to make its content worthy as people enjoyed and loved its campaigns.

Conclusion – What’s unique about the marketing strategy of Santander?

From the above case study of the marketing strategy of Santander bank, we can say that the bank is gaining popularity and has become trustworthy over time. Santander has become one of the largest banks in Spain. With digitalization, it has made its services easier and smooth for its customers.

Also, the bank has launched its Mobile app for its customers for easy access to their accounts which makes it more preferable. The reason for the success of Santander bank is its marketing strategies and advertising techniques which are loved by people and as a result, Santander gains popularity in the banking industry.

If you like such in-depth analysis of companies just like the marketing strategy of Santander check out our IIDE Knowledge portal for more fascinating case studies.