An Ode to Nivea’s Success: Its Marketing Strategy Case Study 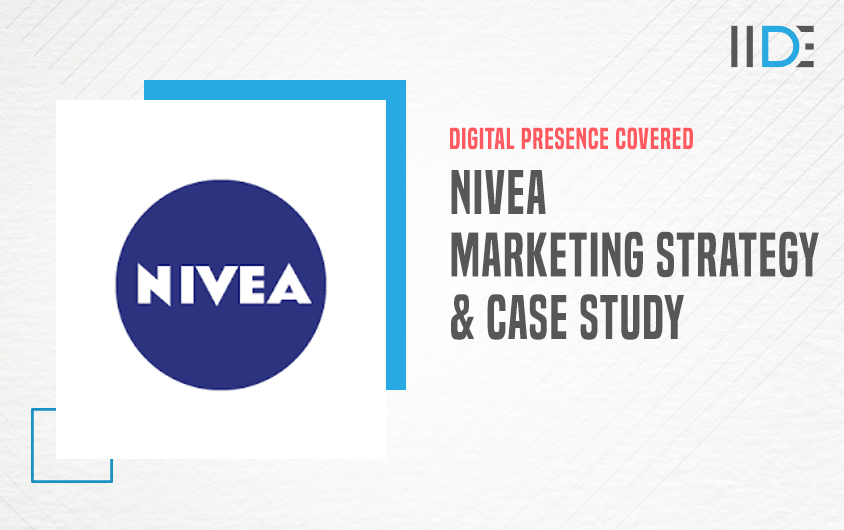 Nivea is a decade-old beauty routine and skin support brand headquartered in Hamburg, Germany. After many years of creation, the brand is spread over 173 countries around the world, with 50 products. Subsequently, it established its division in India, in 2005.

This case study of Nivea includes its marketing strategies, marketing mix, digital presence, social media marketing, and its campaigns. So without any further ado, let’s begin by understanding the company. Nivea is a German personal care brand that specializes in body care. The brand first began its cream-based production in 1911.

Initially, it developed its stable oil-and-water skin cream, boomed as a brand with numerous products, and now is a household name globally.

Primarily, Nivea catered to women and marketed products that grabbed women’s attention. Later, the brand repositioned itself and launched Nivea Men, and with its brilliant campaigns and meticulous marketing strategy the brand came out with flying colours.

Despite economic hardships and a competitive environment the brand continued to grow and initiated umbrella brands under Nivea, to name a few Nivea family, Nivea Men, and Nivea bath care.

It includes categories like body care, face care, sun care, Nivea men and many more in this category.

In recent years, Nivea has boarded various famous individuals for its campaigns on traditional media and digital media.

Now that we have an understanding of the company, let’s understand Nivea’s marketing mix.

A marketing mix is a combination of various strategies that an organization uses to advance the interest for its image or product offerings. The marketing mix includes the 4P’s – Product, Price, Place, and Promotion. Let’s examine the marketing mix of Nivea:

To interest its shoppers with new products Nivea does a broad examination to target key market sections which recognize similar gatherings of people with similar qualities like age, attitude, personality, and so on.

It completes its market search in various manners which incorporates research strategies, utilizing focus groups to tune in to purchasers straightforwardly; gathering information from shoppers, and product testing in these sectors.

For instance, from market surveying, the organization had the option to build up that youthful female buyers required a marvel item that keeps up their typical skin and not a cured product. From this data, the brand built up the Nivea Visage Young to address the issues.

Pricing plays a very vital role in a company’s marketing mix. The cost of a product should be decided deliberately to have the required number of sales. The price of the products mainly depends upon the production costs.

Nivea, with its highly intelligent market research teams, has worked towards developing its market share by practising curvesome pricing strategies. The brand has kept its prices reasonable so it can attract a larger audience.

Nivea believes in a persistent pricing policy as it has focused on the working-class part of the population to cater to the most extreme consumers for its products. The brand has kept its costs sensible to take into account a larger crowd.

Don’t all of us like products that are reasonable and give extreme benefits?

Nivea is a global brand, it has a presence in more than fifty countries worldwide. It has a strong distribution channel. How products arrive at their sale point requires a developed strategy.

Nivea’s distribution is cost-effective as it sells its products to large retailers. It is not feasible for the brand to directly sell to small retailers as the volume of products sold won’t be cost-effective. They have numerous outlets spread around the world where consumers can straightforwardly pick the items dependent on his/her necessities.

Thanks to the ever-rising technology, consumers can directly order from the Nivea website, and products are dispatched from its nearest Nivea warehouse.

To spread the communication to its larger audience, Nivea uses 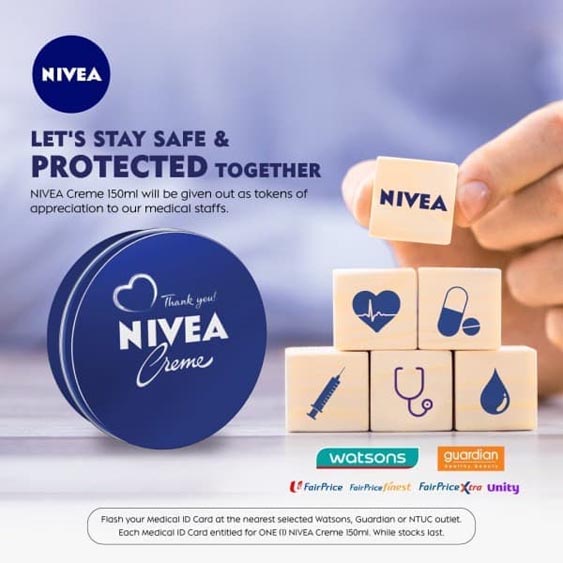 Partnering the product with a big-name artist is the key to drawing young people to purchase the product. Nivea has roped in several celebrities as its brand ambassadors like Anushka Sharma, Arjun Rampal, Parineeti Chopra, Taapsee Pannu, etc. Also, the brand provides offers and discounts on various products.

The whole idea of marketing is significant for the success of any business. A good marketing plan coupled with suitable marketing strategies will ensure that it shall create products and services as per the needs and wants of our customers. Let’s look at the marketing strategy of Nivea.

Nivea has a wide range of products; it has segmented itself as personal and skincare products. Its target group is the middle-class catering to all age groups and genders. It has products for each age group at an affordable price. The main focus of Nivea’s marketing strategy is brand extension, to stay ahead of its competitors.

They productively use both traditional media and digital media in their marketing. They advertise on television and newspapers for their different products, as there are still consumers in India who are engaged with traditional media.

Let us now look at the successful marketing campaigns of Nivea in the coming section.

The purpose of marketing campaigns is to promote its products through different mediums like television, radio, print, and online platforms to reach its clients, consumers and give out its communication. Let’s dive into Nivea’s most effective advertising campaigns:

Mothers Day campaign #JustLikeMaa was to appreciate the love of the ones who didn’t give us birth but loved us just like our moms. This campaign was carried out on a digital platform, developed by DigitasLBi.

The ad had 1.5M million views and comments that included ‘beautifully touched’, ‘emotional’, ‘ unconditional love defined in the purest form’, and many more. Actors like R Madhvan, Genelia D’souza Deshmukh, and Shilpa Shetty Kundra took to Twitter to express their feelings regarding the campaign.

End the Winter Odour – A Marketing Campaign of Nivea

The #EndWinterOdour again, created by DigitasLBi embraced some hilarious short films which highlighted the need of solving body odour during winters.

The key communication of the campaign was that people are unaware of the fact that people are not careful of body odours that may be caused due to extra layering of clothes during winters.

Unlock Your Sparkle – A Marketing Campaign of Nivea

#UnlockYourSparkle featured the new face of Nivea – Parineeti Chopra, for the young girls to flaunt uniquely. The campaign revolved around the Nivea Original Lip Balm with 6 lively colours. Each lip care colour carried its own personality. The 6 different films responded to various personalities of their TG.

Nivea Milk Delights Face Wash was an interesting campaign featuring Taapsee Pannu. As the brand always gives what its consumer requires, they worked towards the solution for Indian skin requirements. The communication was simple that natural ingredients are enough to make our skin look healthy, vibrant, and beautiful.

These were just a few campaigns that aired on both traditional and digital mediums to create huge brand awareness.

In this fast-paced world and everyone having a humongous presence on digital mediums, it becomes extremely important to have extremely active strategies for digital media. Let’s look at the digital strategy of Nivea that resulted in the success of the brand.

Apart from actively branding their products on television, Nivea has a well-built social media presence with an incredible digital marketing strategy handled by Madison Media Omega.

Let’s take a look at the digital marketing strategy followed by Nivea: 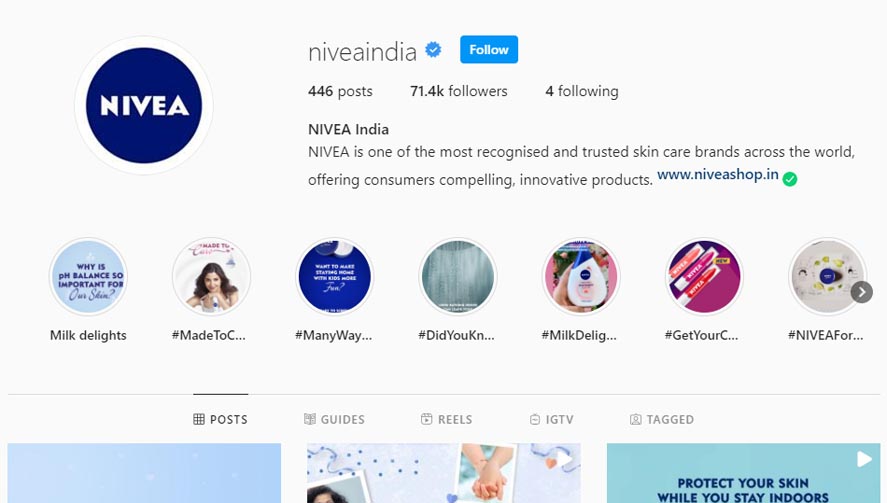 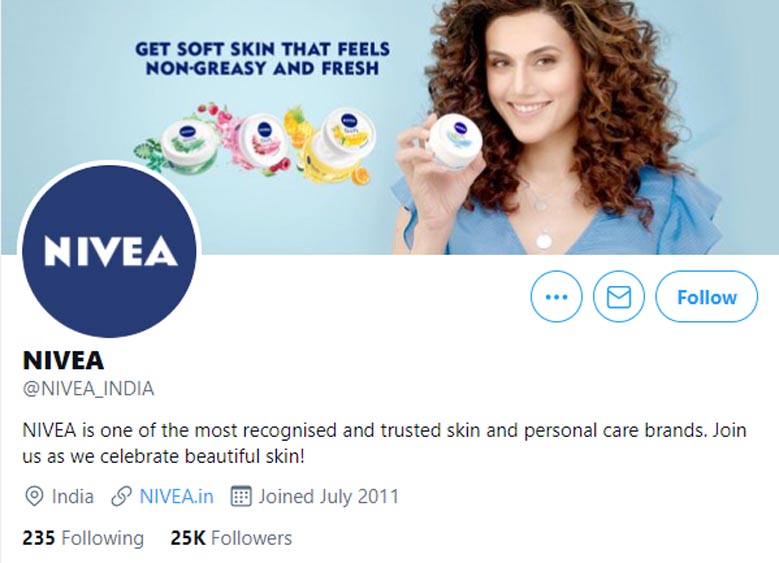 Here the case study on Nivea comes to an end. Let us go through the final points in the coming section.

‘World’s No. 1 Skincare Brand’ as Nivea is called with its old-school ingredients, is a household name globally. It has already established its name in beauty and skin-care products and is widely recognized.

It has systematically segmented its consumers, has positioned its products well and has been marketing all its products in different ways. The value proposition which they’ve developed with their consumers has made them happy, satisfied, and loyal towards Nivea.

The brand has meticulously strategized its expansion in umbrella products so that it can cater to customers of all ages and sectors. With the whole world being on digital media, Nivea can attract more customers by introducing more interactive campaigns and consumer engagement activities.