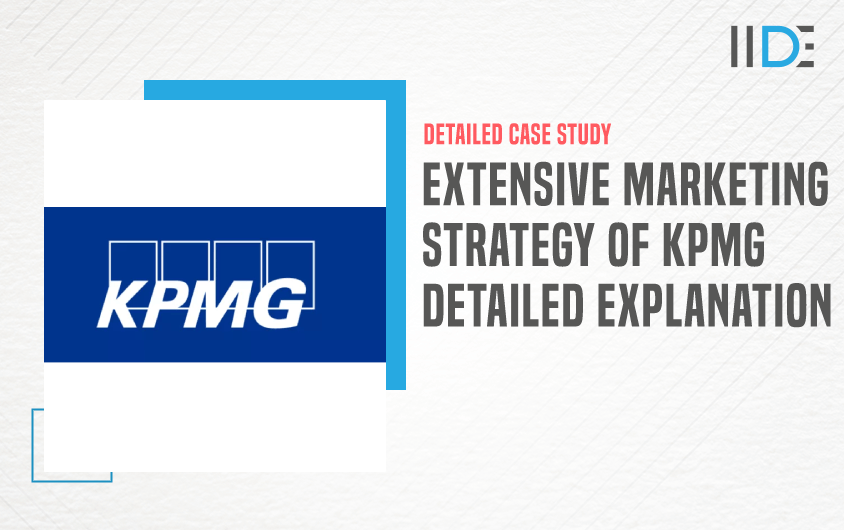 In our previous article, we had learnt in detail about the SWOT analysis of KPMG. In this article, we are going to extensively analyze the marketing strategy of KPMG – a multinational professional services network.

In this blog, every nook and cranny of the marketing strategy of KPMG will be analyzed in a detailed manner with examples. This will be helpful to attain a better understanding of KPMG’s digital marketing strategy as well. We will also be analyzing the target audience and promotional strategies.

Curious about the marketing strategy of KPMG International Limited? Read on to find out everything there is to know about KPMG’s extensive marketing strategy that has allowed the brand to grow into a global network of professional firms providing Audit, Tax, and Advisory services.

The 4 Founders of KPMG

The name “KPMG” stands for “Klynveld Peat Marwick Goerdeler”, each word representing the name of one of its 4 founding fathers – Piet Klynveld, William Barclay Peat, James Marwick and Reinhard Goerdeler – each one of them have a history of starting, working and leading at separate accounting firms even at a stage where accounting was not accepted as a profession.

The merger of Peat’s firm and Marwicks’ firm – Peat, Marwick, Mitchell & Co. – laid the foundation of KPMG. Various other mergers took place between the 1970s to 1980s and finally on January 1, 1987, one of the largest mergers in the history of accounting took place (PMI & KMG) and KPMG was formed.

KPMG has been recording breaks and growing rapidly. In the 1950s it was one of the first big 5s (now big 4) to publish reports and accounts and also the first one to create value charters. Currently, KPMG operates in 145 different countries and territories offering audit, tax and advisory services to its clients spread all across the globe.

The marketing strategy of KPMG is a very extensive and detailed one. There, let us start with the introduction of the brand before we analyze it thoroughly.

Their segmentation mostly appears to be based on location. They have established multiple branches throughout the world so that they can cater to their clients based on the laws and norms of the respective countries.

The target market of KPMG mainly consists of other corporate firms, which bring in huge amounts of revenue. The UK alone contributes to a huge chunk of the total revenue.

KPMG, as a firm, has positioned itself to be a global enterprise instead of just being limited to a particular region. This allows them to gain access to more clients all over the world, thereby increasing their revenue by a wide margin. They also claim to be inclusive and work toward sustainability. 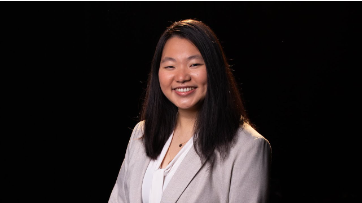 Picture from the “Turn Around” campaign

This campaign featured three women from the KPMG Future Leaders Program, who had overcome obstacles and went on to gain success in their respective fields. It was a video ad campaign that consisted of three videos on the aforementioned three women.

The ads were repeatedly telecasted on NBC, MSNBC, CNBC, and Golf Channel, which made the campaign a sensational success. The campaign promoted the firm’s inclusive policies and progressive views on women, which reflected the firm in a good light among the public. 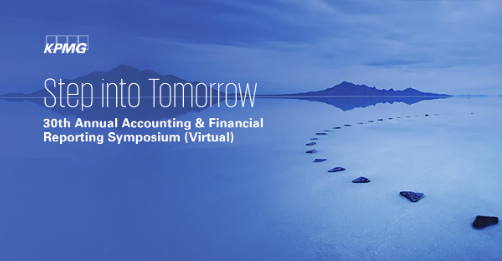 KPMG LLP’s 30th Annual Accounting & Financial Reporting Symposium was a video conference hosted by the US sector of KPMG between November 18-20 in the year of 2020, when the world shifted from offline to online due to the pandemic.

The symposium had various professional experts providing their views on several areas of finance, tax, and regulations. It was attended by people all over the world since it was a virtual event and it helped bring the firm under the universal radar with more engagement from the global population. 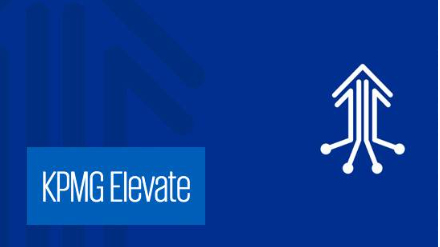 There is also a dedicated website for the same with a detailed explanation of how the service works and ways to avail of the service.

This campaign across several social media platforms helped garner attention to the service on a global level and brought it under the corporate radar.

KPMG can be found on several social media platforms such as YouTube, Facebook, Twitter, LinkedIn, etc. They also have a company blog which is regularly updated.

The firm has the most number of followers on LinkedIn. They are regularly active on every one of their social media handles, which denotes that they have a dedicated social media team.

The content on their social media handles is mostly informational and also consists of press releases. Their posts are based on press releases, product launches, surveys, and financial information. 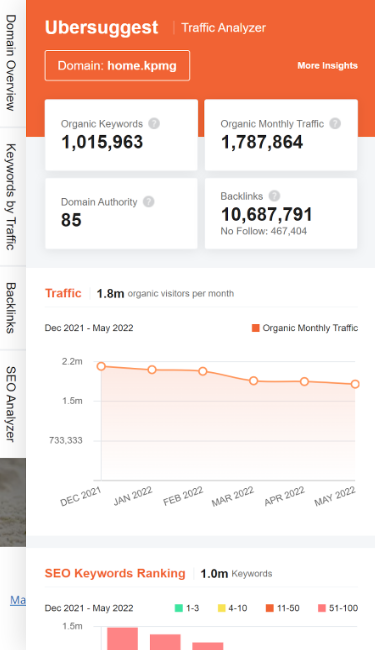 The number of organic keywords on the company’s website is 10,15,963, which is amazing in terms of SEO. Their organic monthly traffic is 17,87,864, which refers to the number of people visiting the website every month on average. These metrics show that the firm is doing exceptionally well in the area of SEO strategies.

Users can avail of the services offered by KPMG from the services section on the firm’s official website. You also have the option of connecting with the members directly through email or LinkedIn. They offer various services namely Audit and Assurance, Tax & Legal, Advisory, and Private Enterprise.

To avail of their services under Private Enterprise, you will be asked to submit your company’s RFP, after which you will be contacted by KPMG with information about how they can help you. The website contains extensive details about the services offered, which makes it easier for prospective clients to understand and avail of the services. They also offer several courses on their website for students to purchase and avail.

The company blog is mostly informational in terms of content and also contains press releases. They post articles on announcements, acquisitions, mergers, events, surveys, and a portion of informational content in the area of finance consultancy. The content on their other social media handles such as Facebook, Twitter, Instagram, etc., are promotional ads to the content on their blog with links attached to the posts. They use social media to promote their blogs which brings attention to their website. This particular marketing strategy of KPMG is highly effective in procuring clients and users to their website.

While looking at the Marketing Strategy of KPMG, we see that they have functioning blogs along with updated accounts on every popular social media platform. This kind of marketing strategy of KPMG has allowed the company’s website to grow exponentially in terms of reach, page visits, and SEO. The marketing strategy of KPMG is working for them and their website is one of the top-ranked websites on Google. Google recognizes the website of KPMG to be a legitimate one and KPMG has grown into a successful international organization.

KPMG has incorporated digital marketing in a commendable way. Its marketing largely depends on digital platforms and through this case study, we can comprehend that there is a balance between organic and paid digital marketing campaigns for the company.

If you like such in-depth analysis of companies just like the marketing strategy of KPMG check out our IIDE Knowledge portal for more fascinating case studies.