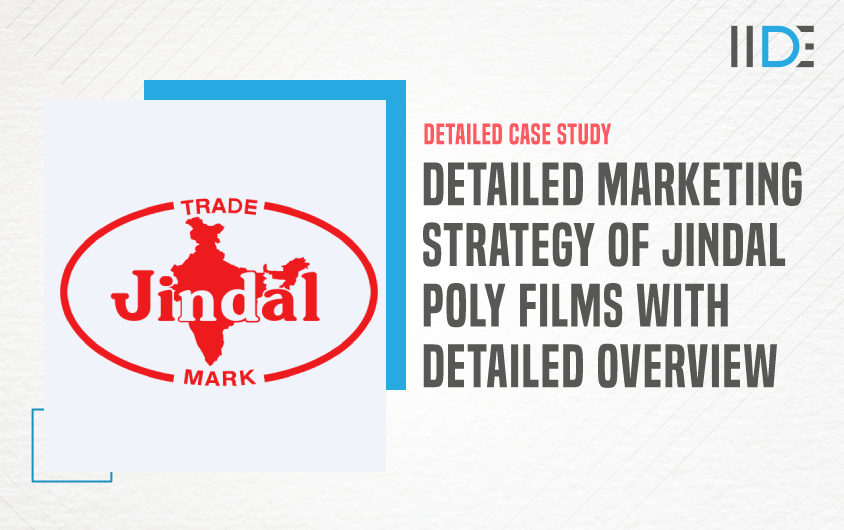 The objective is to learn about Jindal Poly Films limited and how they are becoming one of India’s leading business conglomerates and how they became the largest manufacturer of BOPET and BOPP films in India.

As you can see, the world is now completely online, and marketing is at the heart of every business. If you want to learn more about marketing, attend our Free Masterclass on Digital Marketing taught by our CEO and Founder, Karan Shah.

By the end of this blog, you will learn about the entire marketing strategy of Jindal Poly Films. So let’s begin with the company’s story, target audience, and digital presence.

The Jindal Company was founded in the year 1952 and is a renowned maker of Steel Pipes, Cold Rolled Steel Strips, GP/GC Sheets, and API Pipes.

Jindal Poly Films operates a flexible packaging film manufacturing facility in Nasik, India. The company uses the latest technology from German manufacturers such as Dornier, Bruckner, and Kampf. Its distribution network spans 40 countries and covers 95 per cent of the global market.

Jindal Poly Films limited began as a polyester yarn manufacturer in 1985 and expanded into BOPET film production in 1996. They began manufacturing BOPP and metalized film in 2003. In November 2003, they acquired Rexor S.A.S., a French company that manufactures metalized and coated films, as well as tear tape, stamping foil, security thread, and other high-value products.

The manufacturing plant in Nasik, Maharashtra, is the world’s largest BOPET and BOPP film production facility. They are the 8th largest BOPET Film manufacturer in the World.

Let’s take a look at Jindal Poly Films Limited’s marketing strategies. And how they carry out the marketing campaign etc.

Segmentation can assist the company is focusing on key features and providing customers with features they are more likely to use. Business consumers have a wide range of needs, wants, and demands, as well as locations, resources, access to technology, different cultures, purchasing attitudes, and how they use the products and services.

Market segmentation is the process by which Jindal Poly Films divides the overall market into smaller segments and groups with similar characteristics, purchasing habits, socioeconomic status, and so on. This is done to communicate with the target audience more efficiently and effectively.

Jindal Poly Films’ target audiences are mostly everyone who uses these products in any industry. Consumer durables, transportation, construction, and packaging are among the industries that use them extensively.

Jindal Poly Films is a well-known brand in the chemical and industrial products industries. Because of the industry’s lower production costs and direct connection to consumers via e-commerce and other online retailing tactics, brand positioning and product uniqueness have become increasingly important.

Jindal Poly Films must position its product in such a way that it builds a clear vision in the customer’s mind, providing a specific identity/reference point for the goods and services. About their positioning, they are one of the biggest leading players in poly films.

Jindal Poly Films launches such advertisements and other media campaigns to increase its presence in India and other foreign countries.

Jindal Poly Films Limited is on LinkedIn, Twitter, and Facebook, among several other social media platforms. Linkedin has the most followers ( 14k+ followers ) and is actively posting, and updating about its products.

Twitter and Facebook are not active and have not posted much in the last year, and do not have many followers. The posts on LinkedIn are mainly on product information or festival wishes and also a few posts on their new product launches. 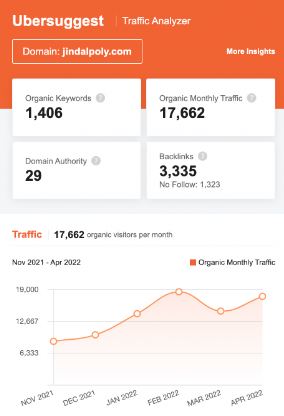 Also, the monthly traffic is around 17K+, which is considered average. As a result, Jindal Poly Films’ SEO strategies still need to be improved while also working hard enough to keep the company soaring in the Google organic SERP rankings.

In talking about the e-commerce strategies Jindal Poly Films has its website from where you can get to know about their products and make an inquiry. Also, you can easily get their contact details from their website.

However, because they do not sell their products through their website, the management of the company has to work on their e-commerce strategies on their websites, which will raise revenue and expand the company’s market reach.

Jindal Poly Films is a business-to-business company that does not require to do content marketing. They only create Linkedin posts as content, which are good and can be improved a little more. Also, they can have a blog section on their website to provide the proper information about the products, plans and projects to the customers.

Jindal Poly Films is India’s largest BOPET and BOPP maker, as well as the world’s eighth-largest BOPET manufacturer. Their biggest shortcoming is their lack of marketing effort. Marketing is a crucial function in a company’s existence, and digitalization is rapidly increasing in the current context.

The company appears to be taking tiny moves towards marketing direction, as seen by their Linkedin posts. They’ll need a strong SEO foundation to boost monthly traffic and sales, but they still have a long way to go.

The company must focus on hiring digital marketers and marketing professionals, in the hopes that they will consider this step to achieve the desired results.

Since the pandemic, the importance of digital marketing has increased dramatically, and it is here to stay; it is moving from a “good to have” to a “must-have” skill.

Almost every other firm, like Jindal Poly Films, is striving to boost its digital presence and, as a result, is looking for digital marketers. Check our Online Digital Marketing Course if you want to learn more and improve your skills. Alternatively, you can enrol in one of our free online masterclasses led by IIDE’s CEO, Karan Shah, to gain insight into the field of digital marketing.

If you like such in-depth analysis of companies just like the marketing strategy of Jindal Poly Films, check out our IIDE Knowledge portal for more fascinating case studies.