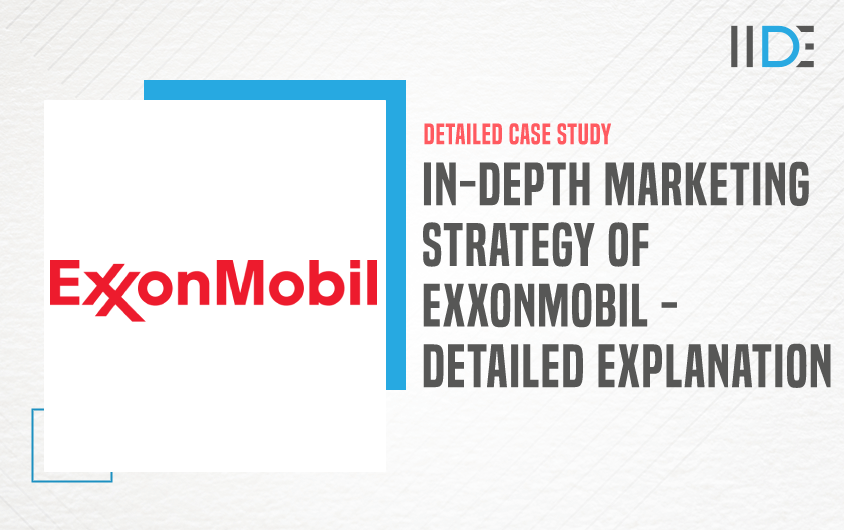 The objective is to help you gain insights into ExxonMobil’s transition and how it became one of the biggest petroleum and energy-producing companies worldwide.

Marketing is a portion of a company’s DNA that can either formulate it or crash it. As users across the world go digital, marketing has followed them to the digital realm as well. If you are interested in new-age digital marketing, then you should check out IIDE’s Free Masterclass on Digital Marketing 101 by our CEO and Founder, Karan Shah.

We will fully cover our marketing strategy for ExxonMobil in this blog. Before we proceed with our deep dive, let us start by understanding the company’s history, target audience, and digital composure.

ExxonMobil is an American multinational oil and gas corporation incorporated in New Jersey, the United States. The company deals in the production and exploration of Crude oil, Oil products, Natural gas, Petrochemicals and Power generation. The company was formed through the merger between Standard Oil company of New Jersey and New York named Exxon and Mobil which was founded by John D. Rockefeller.

ExxonMobil has a strong market position always holding its ranking in the top 5 largest United States corporations by total revenue. It is the largest refiner in the world and one of the world’s Big Oil companies. It operates in most countries and has explored every continent for crude and natural gas. As of FY 2015, Exxon has 23 refineries in 14 countries and has a distillation capacity of 136000 barrels per day.

Let’s take a closer look at the amazing marketing strategies by ExxonMobil and how they handle it.

The target audience of ExxonMobil are individuals and corporate bodies who own vehicles and machines like large plants for production either for personal use or commercial purposes. They aim at machines and vehicles that use petroleum products.

ExxonMobil has been able to directly focus its target on people who are using petrol cars. Based on the demographic they look to target high-class and middle-class families and individuals aged between the range of 18-60 years with their target product

They’ve positioned themselves as a company that embraces innovations and is rapidly penetrating other industries and they are known exclusively for wanting to provide clean energy that is environment friendly.

The brand commissioned the comedian and her mother Jenni Pulos to share the humour in this daily juggling act. Pulos and ExxonMobil collaborated on three different videos for the campaign that features:

A “monologue” from behind the wheel; real mothers and fathers being ambushed at the pump discussing how they plan their schedules; and a Jenni Pulos-signature rap on gas. 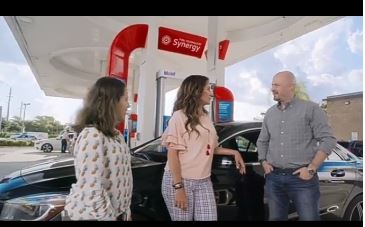 The campaign videos were inspired by a national survey carried out in the United States that shared the humour in busy schedules and the importance of fuel economy to give time back, according to ExxonMobil. 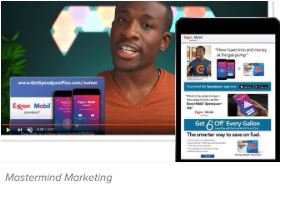 Another campaign that ExxonMobil ran was a social influencer campaign on YouTube that generated about 1 million user engagements, per a statement from the agency, Mastermind Marketing, that oversaw the effort. The energy giant aimed to raise awareness for its Speedpass+ mobile app and urge viewers to apply for the ExxonMobil Smart Card, a credit card issued by Citibank that also works in the app.

The campaign depended on influencers who have automotive or technology channels on YouTube, Google’s video-sharing forum with 1.8 billion users worldwide. A video exhibition of the Speedpass+ app by a trustworthy influencer was a satisfactory way to illustrate its features and usefulness. The Speedpass+ app allows people to buy gas with a connected credit card, Apple Pay or Samsung Pay and is integrated with the ExxonMobil Rewards program. Buyers can apply for an ExxonMobil Smart Card from the app

ExxonMobil’s campaign for its Speedpass+ mobile app and payment card shows how a brand can reach a target audience by carefully selecting social influencers who have cultivated an audience of enthusiasts. It also points to the expanding reach of influencer marketing, which has often been focused on influencers in topics like fashion, beauty, and cooking. In ExxonMobil’s circumstance, the campaign was directed at viewers of automotive and technology vlogs on YouTube.

The video unravels through a peculiar rap battle between Javed Jaffrey who plays the role of a mechanic motivating SlowCheeta to ask questions ‘#PoochaKyunNahi’, about the proper engine oil and being aware of what is being used in the vehicle.

The campaign is composed of the very fabric of being a knowledgeable consumer. Talking about the campaign, Kapil Mittal, market development manager – India for ExxonMobil Lubricants said, “The real challenge today is to be well-informed about the products we use in our vehicle. The ‘#PoochaKyunNahi’ campaign, to display the importance of engine oil, engages the audience to ask the right questions to make the right decision.

ExxonMobil has a presence on social media and they are very active. On different platforms like LinkedIn, Instagram, and Twitter and with most of its audience on Facebook and LinkedIn with over 3 million and 2.6 million followers respectively. They mostly post their ongoing and upcoming projects and their activities to promote them and keep their audience informed with the information they need to know. 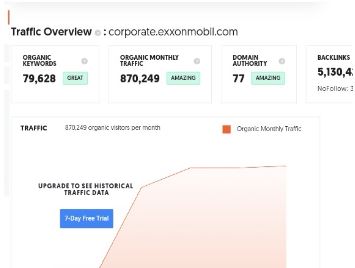 According to SEO ranking, it is said that the number of keywords – below 500 is bad, above 1000 is good, and 10,000+ is amazing. As we can see, corporate.exxonmobil.com has 79,628 organic keywords which are said to be amazing. Therefore it means the digital marketing of ExxonMobil is at its highest and has gained a lot of insights.

We also see that its monthly traffic is above 870,000 which is considered an excellent result thus ExxonMobil is said to be very good in its SEO Strategies and just needs to keep pace to maintain its stand.

ExxonMobil has signed deals and collaborated with a lot of influencers through its marketing campaigns and other means just like in the case of when it’s promoting the Speedpass+ mobile app and with that, they’ve been able to get influencers with a large following of over 200k members which gives them more fame and boost their brands across every country.

ExxonMobil has its e-commerce platform where it displays its products of different kinds and they also sell on other e-commerce platforms like Amazon, Alibaba, and AliExpress. They are currently looking to penetrate the e-commerce industry by producing plastic and environmentally friendly polythene bags. 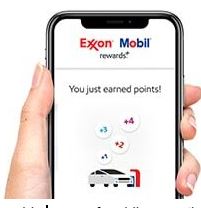 ExxonMobil has a wide range of mobile apps that have different purposes from payment to customer service, engineering, and also consulting.

Their payment apps are ExxonMobil Reward+ which is available on the App Store and Google Play Store but it’s not available in some countries and the Speedpass+ payment app which is integrated with Apple Pay to make payment for fuel easier. Other apps serve their purpose from getting a quick guide to getting access to customer service when in need of them.

They are active on their social media and website and always give information and keep their audience updated with great content and also job openings available in the company from different locations on their LinkedIn and Facebook pages. They are also featured in famous media like New York Times, Bloomberg, and Wall Street Journal which give information about their stock price and market performance.

In the marketing strategy of ExxonMobil, we were able to decipher that they are unique in their services and their mind-blowing innovations to keep up with trends. Also, their brand is really strong and has good popularity both on Social Media and on their website.

If you like such in-depth analysis of companies just like the marketing strategy of ExxonMobil check out our IIDE Knowledge portal for more fascinating case studies.