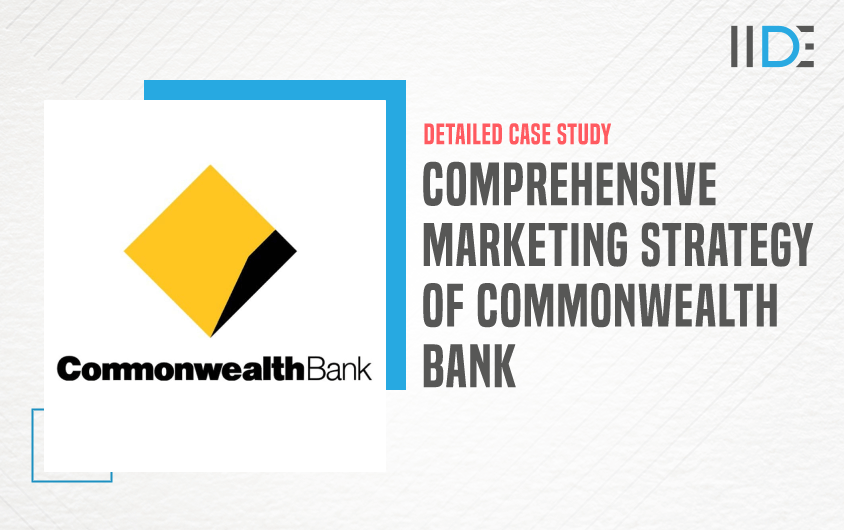 The goal is to learn about the Marketing Strategies appointed by the Commonwealth Bank and how it got to become one of Australia’s leading banks.

With the advent of the online world, marketing has transitioned into digital marketing too. Hence if you are interested in knowing more about the same don’t forget to check out IIDE’S Free Masterclasses on Digital Marketing, by our founder and CEO, Karan Shah.

Now, before we delve into the marketing strategy of Commonwealth Bank in-depth, let’s first start by looking a little into the bank’s history. 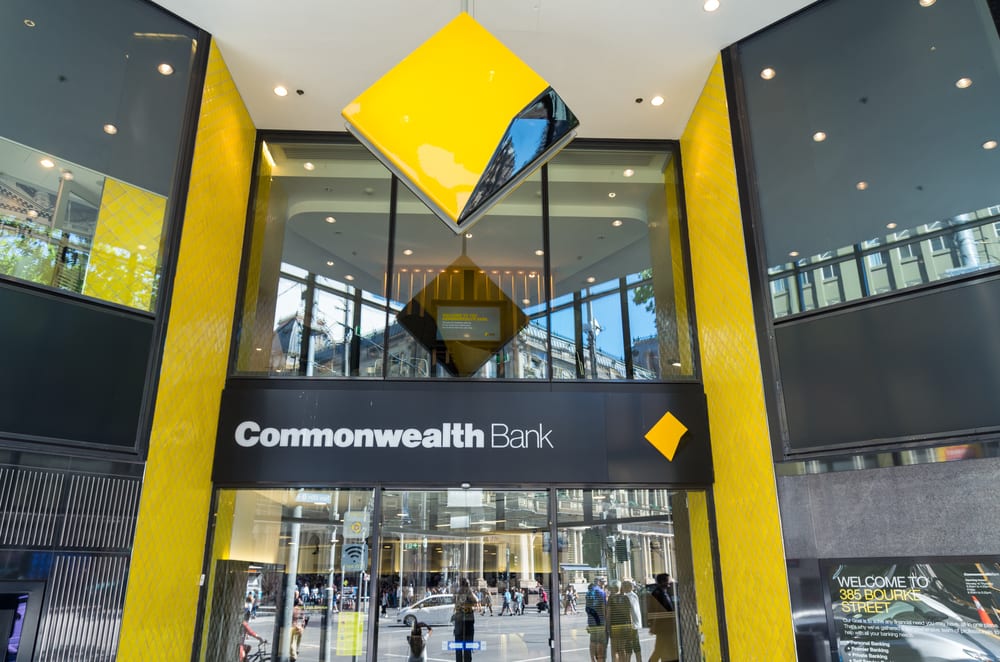 Commonwealth Bank commonly known as CommBank is an Australian Multinational banking group headquartered in Sydney, Australia. The bank was founded in 1911 by the Australian government running under Andrew Fisher Labor, and later became fully privatized in 1996. The bank used to be the central issuer of Australian banknotes from the Department of the Treasury after central bank. The bank is among the top 4 big banks in Australia, and the largest banking group in New Zealand and the Pacific region.

Commonwealth Bank provides a variety of financial services including retail, business and institutional banking, funds management, superannuation, insurance, investment and broking services. Since 1991, the bank has been listed on the Australian Stock Exchange. In Australia, the bank serves about 6 million consumers at over 1,100+ branches. It has around 43,500 staff & serves about 9 million consumers worldwide.

As mentioned earlier Commonwealth bank provides a lot of services including retail, business and institutional banking, hence it has a wide target audience. Anybody eligible to open a bank account is its target audience along with business enterprises. It manages businesses across the world and is the largest retail bank in Australia.

It has positioned Australia as a country with a lot of unlocked opportunities, therefore, positioning itself as the same and always being optimistic and learning from the past. This has been encapsulated in their tagline which says ‘Can Lives Here’. 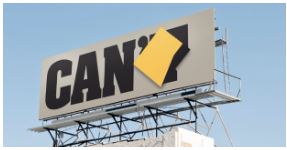 Somewhere around 2012-2015, The bank changed its tagline from ‘determined to be different to CAN. The campaign was started by releasing bus advertisements and billboards displaying the word ‘CAN’T’ to gain people’s attention. Then after a week the CAN’T was replaced by ‘CAN’ with the bank’s logo covering the T. This gave across the employee’s positive attitude that they would bring to the workplace. The bank advertised this new brand message by frequently showing it on TV and radio ads. It was successful as the campaign helped the bank in the Roy Morgan rankings to achieve number one in customer satisfaction. 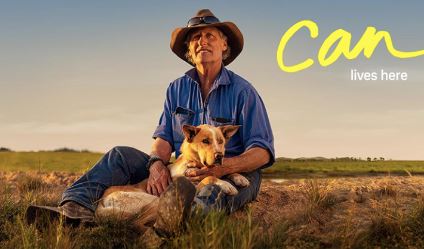 Another marketing campaign, similar to the one above was done in 2020 where the tagline was refined from ‘CAN’ to ‘CAN Live Here’. According to the CMO, Monique Macleod, the bank had been reinventing its strategies for a while making them customer friendly and customer first. Then was the perfect time to rebrand and evolve their logo from CAN to ‘CAN Lives Here’ showcasing the optimistic attitude that Aussies hold, the hard work the employees did, the hard work they will do for a brighter future and their commitment to keeping Australia thriving. The Ad was played on TV on 11th October 2020 encapsulating their achievements, the customers’ experiences etc. This again reaffirmed its place in the market as a Bank that works for sustainable outcomes and brought a new chapter to its history. 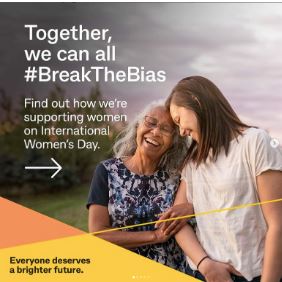 Another campaign held by the bank was on March 8th,2022, International Women’s Day with #BreakTheBias

They launched a program called Next Chapter that enabled anyone encountering financial abuse to restart and achieve financial independence. It allowed the survivors to access confidential support. Acknowledging that women come across unique financial challenges, they introduced a lot of ‘Financial Well-Being for Women’ webinars with insightful tips. Its success however can’t be commented upon as the post on the  Instagram account had more or less the same number of likes as their previous posts and the comments were also really less.

Commbank is active on social media like Instagram, and Facebook and also has an account on LinkedIn. Their Instagram followers are 34.8k at the moment. The posts consist of banking tips, campaigns, schemes and their collaborations with other influencers. Their LinkedIn has 404,148 followers. The account offers a general overview, all the links to their other social media including Youtube, Twitter along with the ones already mentioned above, the account also offers the experiences of their employees and other useful updates. 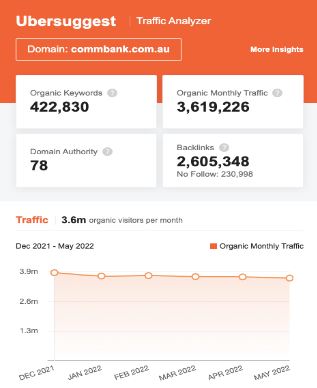 With regards to the SEO ranking, less than 500 organic keywords are bad and need a lot of improvement, above 1k are good and above 10k are amazing. As you can see the number of organic keywords far exceeds the 10k bar hence this implies that the digital marketing of The Commbank is gaining a lot of insights. As for the monthly traffic, above 10k is considered average and above 20k is considered good.

Again as you can see, The Commbank has far set the benchmark at 3,619,226. This all makes us conclude that the SEO strategy used by the bank is highly effective and super well done.

Back when the bank changed its tagline to CAN, it collaborated with a well-known Australian Influence Toni Colette to endorse its message. It has also collaborated with the influencer Matty J who has 337k followers at present for a podcast on money questions. Their Instagram page also features a lot of women players who represent Australia. They are called the ‘Game Changers’ and The Commbank also started a campaign to support the achievements of these recognised female players who have around more than 100k followers.

Talking about the E-commerce strategy, CommBank has a website and all their social media pages where they have all the updates. They provide a lot of digital features such as CommBank Simplify, BigCommerce etc. 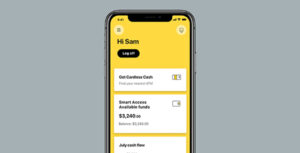 Commonwealth Bank has been in the business of banking for a large number of years. Also, with the variety of secure services, it provides such as the go-on CommBank app which is backed with secured digital channels to provide its users to securely transact with Commonwealth Bank. These big steps made Commonwealth Bank established as a leader in the industry. This helps the corporation to gain a reputation and get recognized easily.

CommBank is active on social media and has various posts on their Instagram related to financial tips, scammer alerts, links to podcasts etc. Its LinkedIn also gives updates. Their youtube is active with 20.3k subscribers as of now. They post video content related to their schemes, although they are of 20-25 seconds hence more like a teaser and not detailed.

The CommBank of Australia is ranked as the number 1 bank in Australia according to Wikipedia and it also had the highest number of customers out of all the Big 4 banks in Australia according to www.statista.com. We believe it’s because of their extensive marketing strategy, rebranding their logos and taglines which gave a sense of ‘evolution’ to them and provided a lot of digital features. Their SEO strategy has been top-notch and they have constantly made efforts to make their website customer first. They have come up with a lot of features such as the  Next Chapter and more that have made them more inclusive.

As already mentioned with the world inclining more towards online mode, digital marketing has become of utmost importance. More than 60 per cent of the world’s population uses the internet, hence a lot of MNCs and SMEs are looking for professional digital marketers. Therefore if you want to develop your skills in this field, do check out IIDE’s 4 Month Digital Marketing Course.

If you like such in-depth analysis of companies just like the marketing strategy of Commonwealth Bank check out our IIDE Knowledge portal for more fascinating case studies.