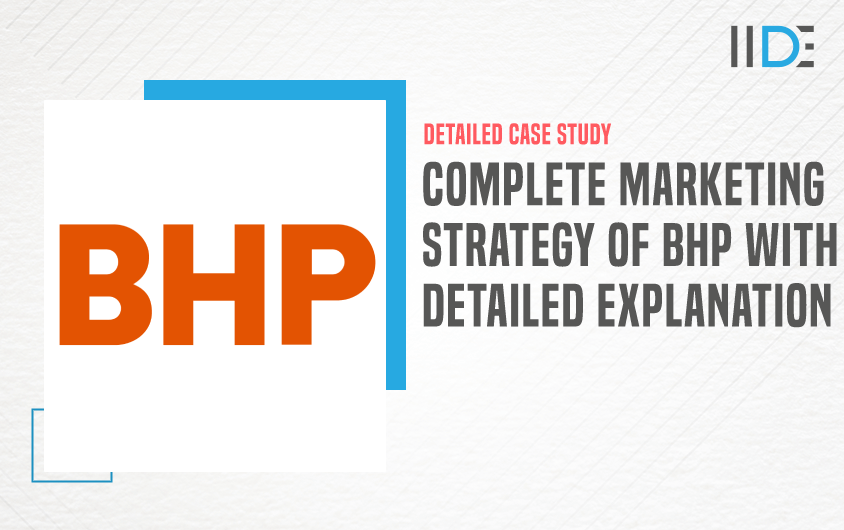 So, are you looking for a detailed Marketing Strategy of BHP? Then you are at the correct place as this article will help you learn and gain insights on BHP & how it became one of the World’s Top producers of resources.

In today’s time with everything getting shifted online, Marketing forms a very important component of every business and company, and BHP being one of the top companies, has focused a lot on the marketing part and has built a very strong online presence across various digital platforms. So if you are interested to know more about Marketing then do take a look at this Free Masterclass on Digital Marketing 101 by the CEO & founder of IIDE Karan Shah.

BHP, formerly known as BHP Limited is the world’s leading International Natural resources Company which was founded on August 13, 1885. The name BHP has been taken from Broken Hill which is a city in Wales where silver, lead & zinc lode was discovered in 1883, Thus the Name Broken Hill Proprietary Company Limited (BHP). In 1900, BHP began its transition from silver to steel & opened Iron mines near the Spencer Gulf.

Further, it began its production of Petroleum and Gas in 1964 & the same year, BHP collaborated with ESSO Exploration Australia. In 2001 BHP merged with Billiton PLC a British company. BHP-Billiton was one of the largest diversified resources companies in the world when it was formed with its operations in about 20 countries.

Currently, BHP is present in more than 90 countries & has its headquarters situated in Melbourne, Australia. BHP produces resources that the world needs to grow and decarbonize like Copper for renewable energy, Nickel for electric vehicles, Potash for sustainable farming, Iron ore & metallurgical coal for the steel needed for global infrastructure and the energy transition. One of the core focuses of BHP has always been Sustainability and they are determined to make a positive difference.

Now let’s look at the Marketing Strategy of BHP and look at its SEO Strategies, campaigns, and much more.

BHP is based on Industrial segmentation, and its segments are based on the commodities it extracts. Being a Multi-commodity industry its major commodities are coal, iron ore, copper, and oil-gas but the Oil-gas segment is its main segment and BHP is known for being the best in this segment.

Further, if you look at the Target Audience of BHP it is very broad and is not restricted to a particular demographic area. BHP being a Global Company gets Raw materials from different places and their finished products are purchased by big companies all around the globe who then distribute the products in their own country.

BHP has successfully positioned itself as it offers a wide range of products that are low at cost, have a long life and are expandable.

Think Big was the first advertising consumer campaign which was launched by BHP in 2017 in its 33 years and was conducted in 2 phases. The first phase of the campaign focused on BHPs history and its legacy. This campaign was shown on television, in print, online, on outdoor billboards, and at international publications outlets.

This Campaign showed the role that BHP plays in addressing global challenges through its supply of essential resources, which further helps in building a sustainable future. Just like the first campaign this was also shown on television, in print, online, on outdoor billboards, and at international publications outlets. Both the Campaigns were super successful and helped in gaining more customers.

(BHP has done just 2 marketing campaigns. Its first campaign was 33 years after the company was formed)

BHP has the largest number of followers on LinkedIn followed by Instagram and is also active on other social media platforms. BHP uses LinkedIn for posting Informative and Job-related alerts while it uses Instagram for Posting information about its new commodities, and mining sites and also uses it for running various campaigns. 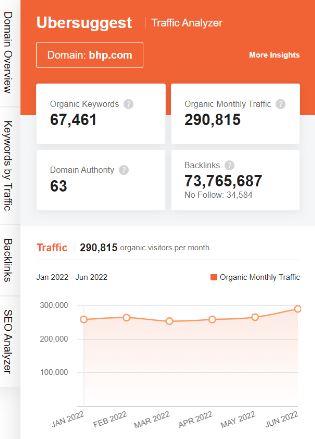 As per SEO ranking, it is said that if the number of keywords is below 500 is bad, above 1000 is good, and 10,000+ is amazing. Thus As we can see, BHP has 67K+ organic keywords which are amazing and that means the digital marketing campaign of BHP is gaining a good number of insights.

Also if we look at the Organic Monthly Traffic then it is 290K + which is really good. Thus this proves that BHP has a foolproof SEO strategy and it works really hard to keep the brand results high in Google Organic SERP results.

BHP is such a segment of the Industry that does not require any special Influencer marketing Vertical to promote their Commodities as their products are well known and trusted. But BHP has made use of the Top management team that it has to increase its reach and it does that by posting on Instagram and by attending various media events.

Also recently BHP has signed an MoU with India’s Tata Steel with an intention to jointly study and reduce carbon levels.

BHP does not have a Mobile app.

BHP is very active on Social Media platforms but it is also very active on Youtube and keeps posting videos related to the work environment at bhp, the history of bhp, and various other campaigns. BHP also posts content via Blogs, Articles, and Case studies which one can find on their website where they regularly post about their new products, media releases, environment safety, and much more.

BHP has built a very good Online presence across various social media platforms from LinkedIn to Youtube and Facebook as well. It has done a Few yet very successful Advertising Campaigns across Television, Print, and many more which has helped BHP Gain Global recognition. Along with that BHP has continuously made efforts to produce Sustainable Products and thus reduce the carbon level.

Today with everything getting online, Digital Marketing has played a huge role in increasing the reach of products, and it’s very important to stay Updated with the trends in this ever-growing field of Digital Marketing.

If you like such in-depth analysis of companies just like the marketing strategy of BHP check out our IIDE Knowledge portal for more fascinating case studies.