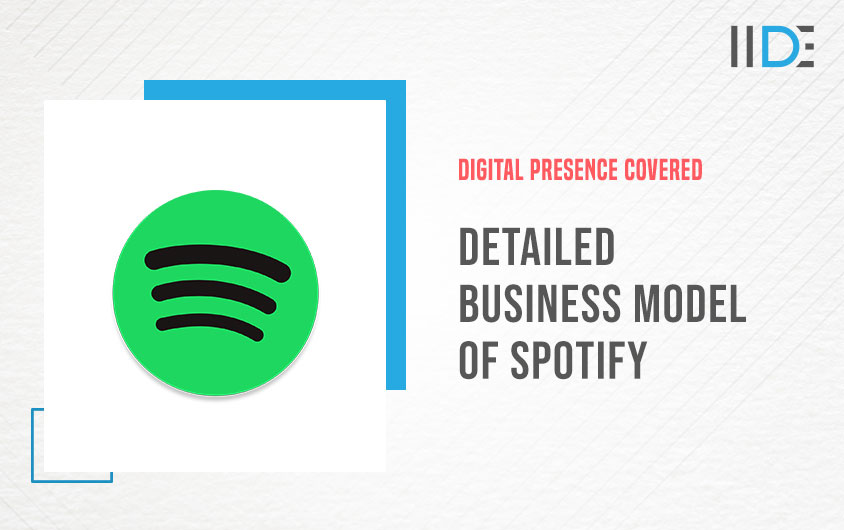 Spotify is redefining how people listen to music in the modern era. With over 70 million songs of music and 2.6 million podcasts etc. Users have produced 4 billion playlists from all around the world. It is the most popular audio-streaming subscription service in the world. After ten years of exponential growth, Spotify went public in 2018 and is now traded on the New York Stock Exchange under the symbol SPOT.

This blog examines the business model of Spotify, revenue model, value proposition, target market, and other factors. Check out our other blogs for more case studies like this one.

Let’s get started by knowing a bit more about Spotify. Spotify started as a small business in Stockholm, Sweden. The platform was created by founders Daniel Ek and Martin Lorentzon in an attempt to combat piracy in the music industry. “I understood that you can never legislate your way out of piracy,” Daniel Ek stated, so developing a platform where every song was available to everyone while also supporting the songwriters, singers, producers, and bands that consumers loved was vital to the music industry’s survival. Spotify changed the way music listeners accessed their music when it started in 2008 with a free version with commercials and an ad-free, subscription-based service. Spotify has millions of songs, audiobooks, podcasts, and live performances available to stream. The algorithms create a personalized listening experience for each person.

Discover Weekly, for example, curates a playlist every Monday based on what users have been listening to recently, featuring 30 songs that are completely new to the listener. Users can create a shuffled playlist of songs depending on their favourite artist, album, or song, and hear more new music that matches their preferences. Spotify also makes it easy to listen to your favourite tracks by allowing you to download songs from the streaming site to your device. Spotify’s success stems from its live programming as well as its industry-leading streaming services. Spotify Singles is a popular show in which musicians are invited to perform their songs live in the studio. Performances are recorded and made available on Spotify so that fans can listen to them long after they’ve finished. On each artist’s page, Spotify also assists musicians in publicizing other live concerts and gigs. 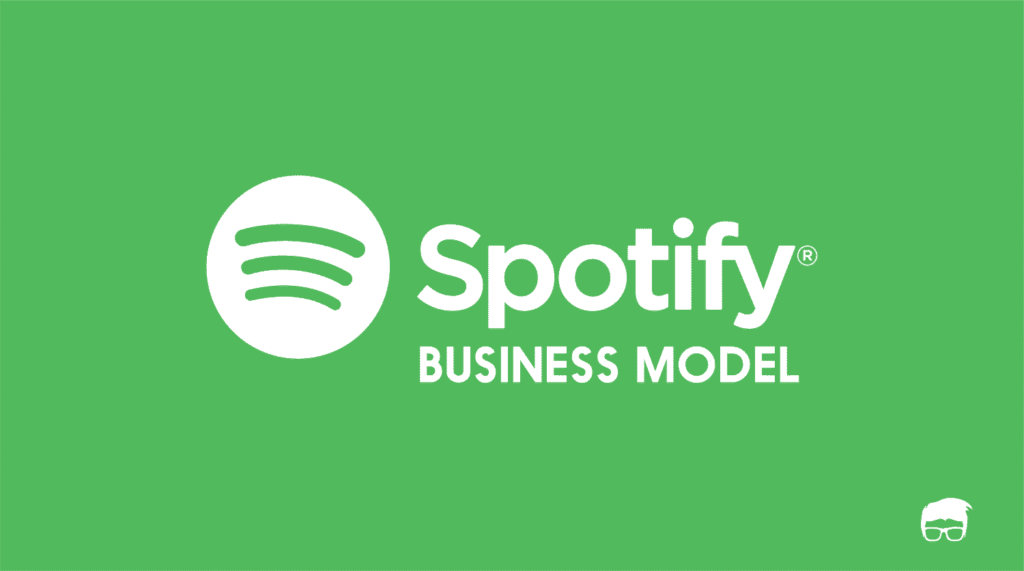 Spotify is a music streaming service that provides customers with access to a massive music library. It operates on a freemium revenue model, with a basic, ad-supported service available for free and an unlimited premium service available for a monthly charge. Spotify’s premium experience is largely dependent on its music algorithms and community of users and artists. Its premium membership base has increased from 10% of total users in 2011 to 46% in 2018. Spotify has always seen itself as a lawful alternative to pirated music and iTunes paid song purchases. Spotify pays royalties to music labels for a large chunk of its revenue.

Accessibility, affordability, personalization, performance, and brand/status are the five key value propositions offered by Spotify. The company promotes accessibility by allowing musicians to make a living off of their music. It allows them to broadcast their work instead of relying entirely on revenue generated by downloads from outlets like iTunes. The company also gives customers access to the music by making it available in a streaming version. The firm provides a price-to-value proposition. It offers a no-cost version of its service. Its premium edition is only $9.99 a month, and clients can check it out for free for 30 days. A student-only premium version is also available for $4.99 per month. Customers can search for songs and make playlists for their music based on artist, genre, album, record label, and other factors, allowing for customization. Through actual outcomes, the company has proved great performance. It has teamed with several brands in particular to raise brand recognition and sales. As a result of its success, the corporation has developed a strong brand. It boasts a half-billion registered users, over 100 million active users, and 40 million paid members all around the world. It offers over 30 million songs as well as thousands of tailored playlists. Finally, the average cross-platform user listens to its content for 148 minutes every day.

Spotify’s business strategy is multi-faceted, with two interdependent client categories that are both required to operate:

2) People who watch it on the internet.

Spotify’s main consumer channel is its website, where the majority of its customers are acquired. Its business development team, which contacts record companies, is the main point of contact for musicians. The company advertises its product on social media, via advertisements, and at conferences.

The majority of Spotify’s customer interactions are self-service and automated. Customers access the service via the primary platform, with little interaction with workers. Answers to frequently asked questions can be found on the company’s website. There is, however, a personal assistance element in the form of phone, e-mail, and social media support, as well as a community element in the shape of a forum.

Spotify’s business model is cost-driven, with substantial automation and low-cost value propositions trying to cut costs. Transaction expenses, a fixed cost, are most likely the main cost driver. Other key cost drivers include sales/marketing and customer support/operations, both of which are fixed costs.

Spotify’s business model is based on the creation of a powerful common platform for two parties: musicians and consumers. A website and a mobile application make up the platform.

Spotify has several brand collaborations in which it assists them in promoting its products by developing music-related apps. Coca-Cola, Uber, and Starbucks are among the specific partners. Developers can also use the company’s APIs and software development kits to create apps.

Spotify’s most valuable asset is its proprietary software platform, which has more than 100 million active users. Its technological employees are responsible for maintaining and updating the platform, while its customer service crew is responsible for providing support. As a young company, it has relied largely on outside finance, having raised $2.56 billion from 27 investors as of March 2016. 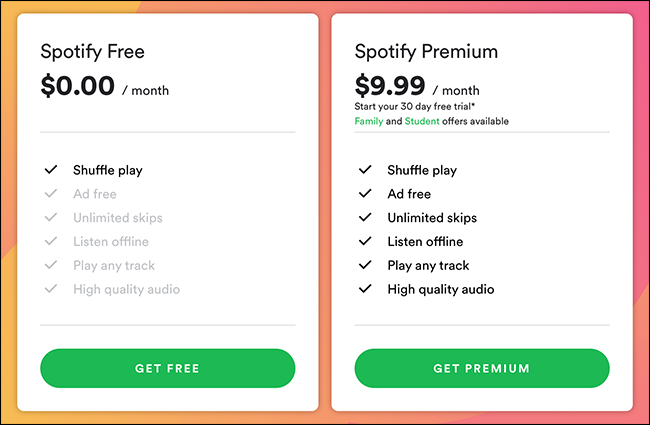 Both paid and non-paying members have access to Spotify’s audio streaming service. However, paid subscribers, known as Premium Subscribers, can enjoy unlimited online and offline access to Spotify’s entire repertoire of music and podcasts without having to listen to advertisements. Subscription payments are how Spotify makes money from its Premium Service division. In FY 2020, the division generated €7.1 billion in revenue, accounting for around 91% of total revenue. Spotify’s gross profit for the year was €2.0 billion, accounting for nearly all of the company’s profit. In comparison to FY 2019, the segment’s revenue increased by 17.2 per cent. In comparison to the previous year, gross profit increased by 22.3 per cent. The gross margin for the segment was 28%, up 1% from the prior year.

Spotify’s Ad-Supported Service is available to members who do not have a premium subscription. Users receive limited on-demand internet access to the company’s music library and unrestricted online access to its podcast library. Advertisements are placed throughout the user’s streaming experience. The majority of Spotify’s Ad-Supported Service revenue comes from the selling of advertising across its music and podcast content. In FY 2020, the segment generated €745 million in revenue, accounting for nearly 9% of total revenue. The segment’s gross profit was €6 million, accounting for a small portion of the company’s total gross profit. In comparison to FY 2019, the segment’s revenue increased 9.9% but gross profit dropped 92.4 per cent.

A student likes a good deal more than anyone else. Spotify, like many other platforms, responded by offering students who can prove their active enrollment in a university a 50% discount on premium services. With 50% of customers under the age of 34, Spotify has the most youthful user base of any other music streaming service. Spotify Audiences can be reached in a variety of methods to ensure that your campaign is tailored to your target demographic. The age varies from 13 to 65 years old, indicating a wide variety of ages to target — for example, 15/16-year-olds for colleges and 17/18-year-olds for university. 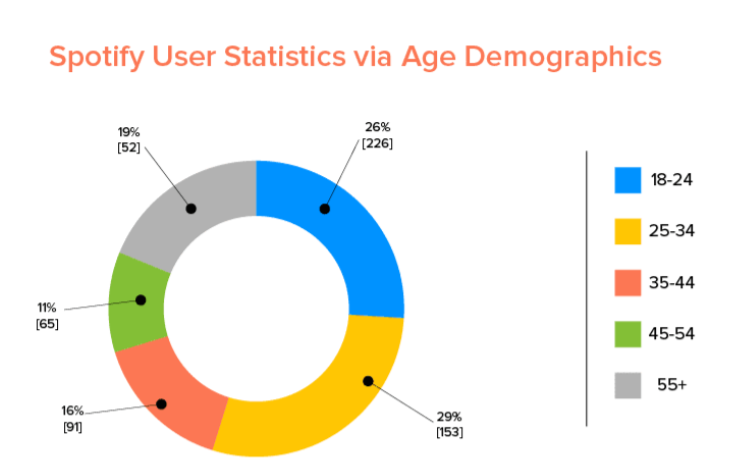 Spotify stands out as a prominent innovation in the realm of music streaming in the quickly changing Internet economy. Starting in a crowded field, Spotify soon surged to the top of the music streaming industry and became the service of choice for millions of customers. This was accomplished through a user-centric business model that prioritized the attention of millions of users over the economic value of the music it provided or the potential for monetary profit. Spotify was able to establish a network economy and earn value as a business from marketers and music artists alike because of this transition away from a profit-driven business model. Spotify was able to achieve popularity and attract a larger library of music to offer customers by realizing the value of the network and the strength that could be harnessed by focusing the network’s attention, which in turn boosted the network’s and Spotify’s power. Spotify’s user base, on the other hand, exists in an ever-changing digital environment where technology evolves at a rapid pace and new competitors emerge regularly. Spotify must constantly improve and adapt its products to the changing needs of its audience to the market’s top contender. They have retained their position as the most popular music streaming service solely because they have improved their ability to provide their enormous network with updated services and innovative goods, as well as focusing their business strategy on the demands of their consumers.

I’ll leave you with the IIDE Free Digital Marketing Masterclass if you want to learn more about IIDE and digitally update yourself in these important times.