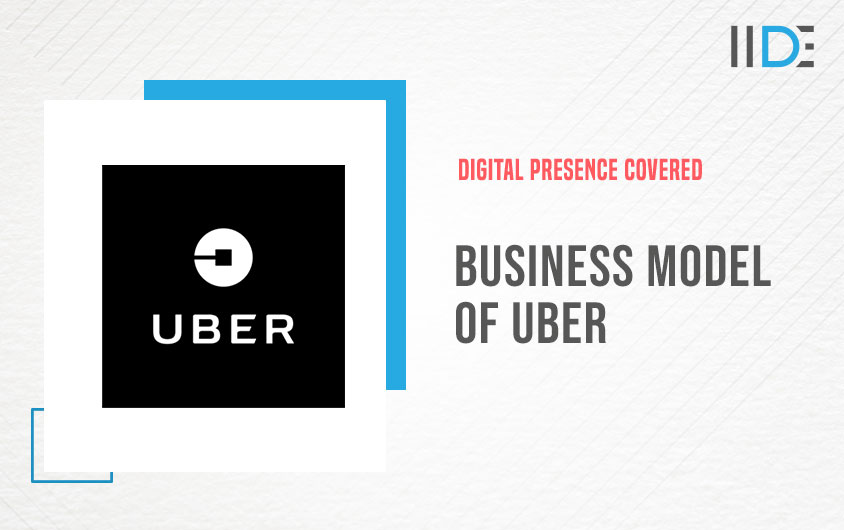 Uber Technologies Inc. popularly called just ‘Uber’ is a service providing company. It predominantly provides a ride-hailing service to its consumers. It uses technology to deliver services such as booking rides, ordering food online (Uber Eats), package delivery services, etc. It was started in 2009, founded by Garrett Camp. It is based in San Francisco and is now operational in over 900 Metropolitan cities globally. Uber is undoubtedly one of the largest firms in the technology/ gig-service economy.

For wholly digital businesses like Uber, having a strong online presence is a must and it is one of the reasons why the company has risen amongst the ranks so fast. Digital marketing has become more relevant than ever since businesses need to have an online business to stay in the game. If you are interested in knowing the latest marketing techniques as well, you should definitely check out IIDE’s Free MasterClass on Digital Marketing 101 by our CEO and Founder, Karan Shah.

In this blog, we’ll explore the business model of Uber Technologies Inc. and discuss how their business operates, their finance model works and the different verticals they’re branching out to. So without beating around the bush let’s begin by first learning more about Uber as a company!

The company is headquartered in San Francisco and its operations are widely spread over 900 metropolitans. it is one of the largest firms in the gig economy.

Currently, they are estimated to have monthly users of 93 million globally. Their visionary statement is “Transportation as reliable as running water, everywhere for everyone.” Affordable, safe, and reliable transport are the primary goals for the company and they believe in creating job opportunities with a dependable income for many drivers.

They ignite opportunities by setting the world in motion, they are committed to becoming a fully electronic & zero-emission platform by 2040. As the world’s largest mobile platform, we have a responsibility to tackle climate change more decisively. We will do this by empowering passengers with greener travel options, helping motorists switch to electricity, prioritizing transparency, and working with NGOs and the private sector to help accelerate the transition to clean and fair energy.

Now let’s get to know what exactly the business model of Uber is and how it operates.

As a gig economy, the business model of Uber is something that has not been observed before. Instead of the typical aggregator model which works as an agent for service providers, Uber works more holistically – like an ecosystem whose management is done by the company. Let us elaborate on this by first looking into the business operations of the company.

In this segment, we’ll take a look at the business operation model of Uber from the consumer’s as well as the service providers aspect.

Not everyone has their private transport nor can everyone drive their transportation daily to commute. So, Uber acts as a facilitating platform for such consumers to get their daily transport at their fingertips by connecting them with nearby ride service providers through their application technology available on both iOS and Playstore as well through their website. It addresses and solves the hassles that pop up while booking a ride in the late evenings, or a foreign country/language, lack of location knowledge, over-priced ride fares, safety concerns.

That’s just one side of the business operating model. Uber also caters directly to the ride providers which are referred to as ‘Partners.’ Uber provides an online platform to the ride drivers to register themselves with Uber so they get their customers easily and at their pace. It makes it easy for car owners who want to provide ride services to contribute to their revenue.

So, in a way, it tactfully transforms the ‘old- taxi ride system’ model into a modern ‘service-based technology’. Offering solid value additions to both the consumers as well as the service providers.

Application-based business models are the way to the future and most companies that rose in fortune in the last decade have an app. It is the perfect service and marketing tool for a company. If you wish to learn more about how you can be a specialist, check out our App Store Optimization Course.

Now that we’ve briefly understood how their business operates, let’s take a look at the next most important aspect of the business model of Uber, their financial model.

The finance model of Uber is extremely scalable. Operating in over 900 Metropolitan cities worldwide, it adheres to a uniformly distributed Finance Model globally. So let’s understand how the Financial Model of Uber works.

Uber does not employ its own drivers, so it does not own the total revenue generated through its rides. The revenue model Uber operates by is based on a commission basis. In this commission model, it charges a fee of 20-25% (that may vary based on different locations, class of vehicles, upsurge) from the partners providing their ride services on all the ride fares they make. They charge their partner drive-service providers for the use of its software application, collection and transfer of ride fees, credit/ debit card commissions and the distribution of invoices to customers.

The company has around 91 million monthly active consumers on their platform, and its revenue in 2018 was close to $11.3 billion. From which over 80% of its revenue was from its ridesharing service, which totalled revenue of around $9.2 billion and a gross booking of $41.5 billion in 2018. Uber defines the total amount of bookings as the total dollar amount, including applicable taxes, fees and charges, without any adjustment.

Despite the huge revenue generated from financial reporting, Uber has not achieved full success in recent years, suffered a series of catastrophic losses over several quarters and was embroiled in scandals with the driver and even its founder. and former CEO Travis Kalanick.

Now that we’ve understood the finance model of Uber, let’s take a look at the different verticals Uber Technology Inc. has ventured into!

Starting only as a cab-ride aggregator, the business model of Uber Technology Inc. has expanded to include other services along with personal logistics under its wing. Let’s take a look at each of its verticals:

Uber reveals that it generates significant revenue from business units that it has framed into three broad categories: Personal Rides, Uber Eats and Uber Freight. It has also been operating in 63 countries and more than 700 cities. In its S-1 filing, Uber makes it clear that it aims to provide everyone on the platform with a “safe, reliable, affordable, and convenient trip within a few minutes of tapping a button,” as well as aims to provide independent driving service providers with a “reliable and flexible way to earn money.”

The in-app options make it easier for customers to book from a variety of ride options including UberX, Uber Select, and other ride services like Assist for passengers who require help getting into the vehicle and also at their destination. The UberPool option provides customers to share their rides with fellow passengers heading toward the same destination through the facility to carpool with them thus saving some amount on their regular fare price. In certain locations it also lets passengers hail conventional taxis through booking the taxis via their app. Uber has also acquired JUMP, the electric bike-sharing firm and has also invested in Lime, which also is a bike and scooter-sharing startup. It likes to call these acquisitions the “New Mobility.”

Uber launched UberEats in 2014. It generated close to $1.5 billion in revenue in 2018. Uber Eats is an online food ordering and delivery platform launched by Uber in 2014. It lets users read the menus, reviews and ratings of the restaurant and also lets the users 5order, and pay for the food from participating restaurants through their application which is available on iOS and Android platforms, or also through a web browser. Users can also tip for delivery.

As per its IPO prospectus, around a whopping 15 million people got a meal using Uber Eats in the fourth quarter of 2018. UberEats have also collaborated with several “virtual restaurants” which produce meals or meal kits in commercial kitchens but may not own a brick and mortar restaurant where they serve customers. More than 220,000 restaurants now let their customers order food for delivery via Uber Eats that too in over 500 cities globally.

UberEats assists the company Uber by tapping into revenue that is non-transportation by keeping drivers on the Uber platform. It works by letting drivers make food deliveries instead when there isn’t as much demand for rides from passengers. Moreover, even if the drivers don’t have a vehicle that would meet the requirements for taking passenger rides, Uber lets such drivers work on food deliveries.

Uber ventured into yet another proposition with its logistics front, Uber Freight. Uber Freight app was launched by Uber in 2017 with the aim to link shippers of goods to carriers who can haul them. Uber Freight generated over $125 million in revenue in the fourth quarter of 2018 and scored Uber some impressive business customers by providing regular shipping services to Anheuser-Busch InBev, Niagara, Land O’Lakes, and Colgate-Palmolive.

Uber also plans to provide an air-taxi option to its users via Uber Elevate, that incorporates the usage of autonomous passenger drones for helping in commuting people over traffic from a landing pad to a landing pad in the future. It is also on its way to investing and developing its own self-driving software via its Uber Advanced Technologies Group or popularly known as Uber ATG. Uber has soaring ambitions in avenues involving high risk like self-driving cars despite all the risks it entails.

This brings us to the end of the business model of Uber, let us now summarise our learnings.

It’s safe to say that Uber Technology Inc. is the pioneer of ride service providing avenues. The business model that Uber Technology Inc. adopts is quite revolutionary. It has cleverly understood the problems and hassles of transportation and lifestyle based tasks and seeks to cater to solve those problems. The future of Uber appears bright with their ever-growing optimisation of transport based technological investments and acquisitions. It’s a clean and intuitive application and a software-based platform has been a key component to their massive success!

Online Communications and Technology is the way to go for the future and when paired up with marketing skills and strategies it can bring incredible growth to any firm aspiring to become a unicorn. You can also learn how to create an impactful and targeted marketing campaign by being a part of IIDE’s Online Digital Marketing Course which upskills you in all aspects of the rising digital marketing field.

Thank you for reading this article! If you wish to add to the discussion, write your thoughts in the comment section below.