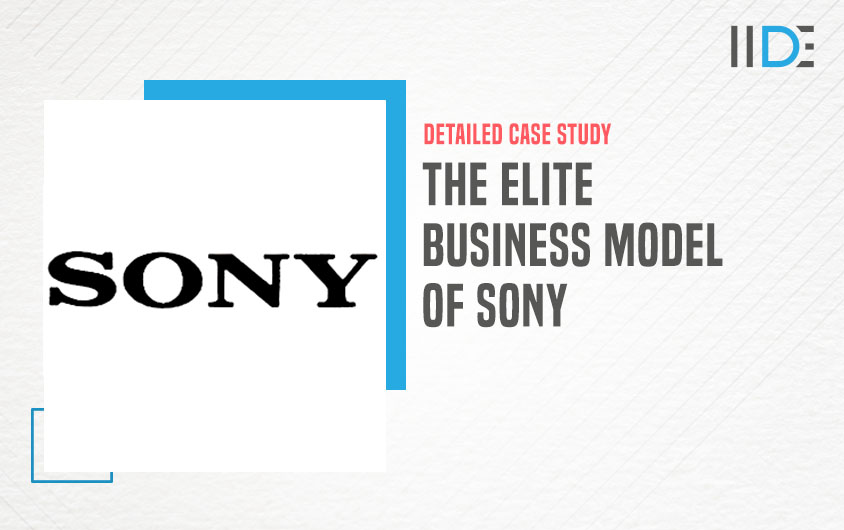 Looking to learn more about what makes the Business Model of Sony successful? Then you are in the right place!

Sony Corporation, headquartered in Tokyo, is a Japanese multinational conglomerate. Masaru Ibuka founded Sony as an electronics store. It was used to create the world’s first tape recorder. Sony has risen to become a household name for all clients throughout the world over the last seventy years and has expanded its reach into gaming, music, and filmmaking.

In this case study, we will be discussing the marketing strategy, marketing mix, swot analysis and business model of Sony.

Sony is a worldwide recognized corporation with a diverse variety of operations. They aim to make the most of their distinctiveness by implementing their convergence approach aggressively. Sony’s main goal is to enthral and move its clients with its distinctive products. Masaru Ibuka and Akio Morita founded the company in 1946, and it is headquartered in Minato, Tokyo, Japan.

When it comes to semiconductor manufacturers, Sony is ranked 20th in the world. In 2008, Sony Corporation employed around 163,000 people. By 2014, they were one of the top five global brands, with annual revenue exceeding $8.87 trillion. It’s due to their exceptional quality.

They exceed their clients’ expectations to deliver complete satisfaction.

The Sony Corporation is primarily focused on electrical products such as televisions and computers. They are as follows:

Now that we have an idea of what the company is about. Let’s begin finding the marketing strategy of Sony.

Sony is a highly aggressive company, releasing new products every year for all its multiple sectors. Sony has always positioned itself somewhere between premium branding and a masse consumer brand, providing a large range of products from the lowest price point all the way up to professional electronics with large price tags.

They target consumers’ mindsets to build brand equity for their products. For example, when it comes to music-related gadgets, Sony is the first name that consumers think of. Sony also lowers prices and offers discounts during the holidays to boost sagging sales – that is to say they believe in volume sales more than premium branding maintenance.

While marketing their products, the business model of Sony skews towards high volume marketing and high brand visibility as it has many competitors of equal calibre. Sony uses all media to advertise including TV, print, online ads, billboards, and so on. Sony bases its brand on the high quality of its products and services.

Sony advertises the beauty and performance of its products, such as computers and cellphones, with the help of movies and other celebrities. As a result, it can be deduced that Sony employs a large number of celebrity endorsements for its brands.

It even has a strong social media presence and uses video content, online ads, and other forms of digital marketing to keep its users engaged – showcasing how the business model of Sony and its marketing efforts are geared towards enticing younger audiences.

Now let’s peek into the different strategies employed in the business model of Sony.

Product is a critical component of any business – it is the main criteria on which the success of a company depends.  Before purchasing a product, a buyer considers if it is safe, whether it meets their needs, whether the product is attractive, at the same time it needs to be affordable.

The business model of Sony is hinged on its high-quality products and excellent customer service. They are the entertainment industry’s market leaders, and their products are quite beneficial. Sony Corporation produces the following items:

The business has recently begun offering customized PlayStation and Sony cards, which can be used as reward credit cards. They sell computers under the Sony Vaio brand. It was first released in India on October 24, 2004. These laptops are available in seven different versions, including:

These are the variety of products offered by the company. Now let’s discuss the pricing strategy of Sony.

Sony makes an effort to price its products strategically. They strive to create a three-tiered price plan that caters to economy, middle-class, and high-end buyers. They charge a premium price for their unique product when it first comes out, and then progressively lower it. The concept is that when a product is first introduced, this method aids in profit maximization, and as the price drops, it increases sales volume.

Sony, on the other hand, was a low-cost manufacturer of a variety of devices. This allowed them to have sufficient resources, allowing them to outperform their opponents. Perhaps the best illustration of a combination of distinction and low-cost initiatives is Sony’s pricing strategies. Sony attempted to price each model in their laptop series according to its style, mobility, purpose, performance, and user.

This is how Sony sets its price to grasp its customers. Let’s find the placement strategy of Sony.

The centrepiece of the business model of Sony is centred on the company’s distribution channel. They make certain that their products are freely accessible to their customers. In a country like India, where people want to buy long-lasting and durable products, the distribution route is extremely important. The manufacturer, retailer, and finally the customer make up their distribution channel. They primarily distribute their items through a limited number of dealers, such as SONY WORLD.

They have a large presence in India, with branches all over the country. They have around 7000 channel partners, over 260 Sony stores, and 21 branch sites in their distribution network. They employ a single-level distribution channel in this case. Dongsheng International Trade Co. Ltd, Front-Page Trade Co. Ltd, Best Wholesale Co. Ltd, and Denzuke Network Sdn. Bhd is just a few of its wholesale distributors.

Sony does maintain a large business market to expand it globally. Let’s see how the company promotes its products.

Promotion is the key to successfully launching the product and making the target customers aware of its utility. The promotion has an impact on both the company and the product. It significantly increases the company’s profit while also providing knowledge and raising consumer awareness of the products. Sony Corporation appears to be making good use of this.

Their tagline “Make. Believe” sends a message that initiatives in-network services, electronics, mobile phones, music, and movies should all work together. It also represents Sony’s core values of innovation and creativity. They employ a large number of celebrities to endorse their products. Previously, the faces of their products in India were big actors like Deepika Padukone and Kareena Kapoor. Currently, Katrina Kaif has been named a brand ambassador for Sony’s Xperia smartphone line.

Sony advertises its products through various mediums such as newspapers, televisions, billboards, magazines, and so on. They also have a strong web marketing presence. They use a variety of pdf brochures and videos to ensure that customers understand their products and services. Along with this, they provide cards with redeemable points when a purchase is made. They primarily focus on the pull strategy for attracting customers.

The business model of Sony is humongous and at its core is dependent on delivering high-quality products and strong supply chains across the world to maintain the company’s market leader position. Let’s take a look at the swot analysis of Sony below.

Over the years, Sony Corporation has established itself as one of the market’s most powerful brands.

The brand’s image would suffer if the company did not provide a high-quality product.

Sony’s after-sales service is exceptional and should be mentioned among the company’s strengths.

When you think of Sony, the first thing that comes to mind is electronics, such as TVs, PlayStation mobile phones, and so on. Sony, on the other hand, provides financial services and owns the well-known Sony Pictures Studios. Diversification reduces Sony’s market risks and aids in the company’s stability.

Sony’s position in the mobile world is one of its weaknesses. Sony’s mobile device performance quality is noticeably lower when compared to market leaders.

Sony does not engage in promotional activities as frequently as its competitors.

3. The High Cost of Production

Sony’s high cost of production, particularly in the TV business, results in higher product prices. This gives its competitors a competitive advantage, which has already resulted in some of them losing market share.

Sony provides one of the best products in this industry, so it is reasonable to expect that by maintaining its high ranking in this market, it will be able to enjoy even higher profits over the next five years.

In today’s rapidly evolving technological world, having new innovative products is critical, as it will undoubtedly boost revenues and provide the company with a competitive advantage.

Acquiring Ericsson’s Share of the Sony Ericsson joint venture allows Sony to act as an independent mobile producer and find innovative ways to improve its position in the smartphone and tablet industries while enjoying the full profit of the product.

Sony is in a static competition with some world-class names like Samsung, LG, and Xbox, so it is critical to keep up the pace with new innovative approaches and promotional activities.

Because Sony has a high-priced product policy, there is concern that more customers will switch to more affordable products for a variety of reasons.

Because Sony has recently increased its reliance on networks and online databases, cyber-attacks are another potential threat.

The SWOT Analysis of Sony showcases that even though the company is a market leader in many segments of the consumer electronics market, key markets such as mobiles still are relatively untapped by the company and that Sony still has many different markets to explore.

Sony is one of the most coveted and leading manufacturers of communication, gaming consoles, information technology products, electronics, and video for professional markets and customers, which has helped the company grow into one of the world’s wealthiest and most likeable corporations.

An important part of the business model of Sony and its promotional strategy is the usage of digital marketing to reach its customers. Every business across the spectrum is reckoning with the dire need to leverage digital marketing to boost their businesses as having a digital presence becomes impertinent.

If learning the latest techniques of marketing interests you, check out IIDE’s Free Digital Marketing MasterClass by our CEO and Founder, Karan Shah, in which he will guide you through all you need to know to understand the scope of digital marketing.

Thank you for your time. Please visit the IIDE website for more details. Try