Presenting the Detailed Business Model Of Ola: One of India’s Most Famous Unicorn 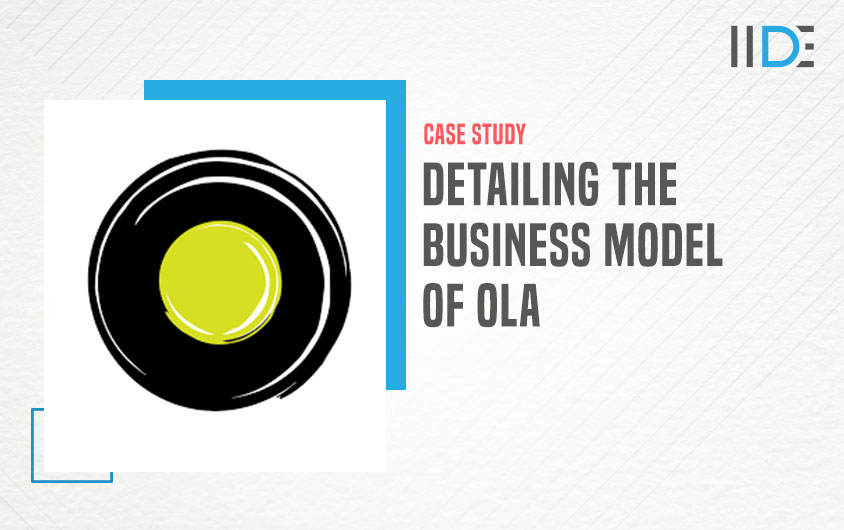 Gig economies are the future, and you are in the right place to understand one of the most famous ones in India – the Business Model of Ola.

The Ola app offers easy solutions by connecting customers to drivers and a wide range of vehicles across bikes, auto-rickshaws, and cabs, enabling convenience and transparency for hundreds of millions of consumers and over 1 million driver-partners. Its core offering in India is supplemented by its electric vehicle arm, Ola Electric, India’s largest fleet management business, and Ola Skilling, which aims to enable millions of livelihood opportunities for India’s youth.

Ola cabs, which have completely revolutionized the way India travels are a crowd favourite, given its convenience, efficiency, and how it allows us to save the daily arguments and haggling with auto/cab drivers who refuse to go by the meter.

Ola also extends its offerings like micro-insurance and credit-led payments through Ola Financial Services and a range of owned food brands through India’s largest network of kitchens under its Food business.

Let’s learn more in detail about the Business Model of Ola, its target audiences and its strategies.

Ola was incorporated in 2010, and since then has been steadily making its presence felt in the personal commute markets. The transportation network company founded by Bhavish Aggarwal and Ankit Bhati is among one of the fastest-growing businesses in the country. Ola was valued at a whopping $6.5 billion USD in 2019 when it raised funding from vehicle maker Hyundai last year and is considered one of the fastest up and coming startups of the country, if not the world.

Its arch-nemesis is Uber, which is a dominant international player in the same space. Ola has been funded by many prominent VC firms and investment banks such as the famous Softbank.

In May this year, Ola laid off 1,400 employees, or over 33 per cent of its workforce, due to the coronavirus pandemic. It saw a massive slump during the lockdown. But green shoots are said to be emerging for the firm now. With the Indian economy opening up almost entirely, the company is now seeing a recovery close to the pre-Covid level, with close to 100 per cent recovery in key cities during the festive season.

The increased demand is expected to continue, say sources. The opening of offices, malls and more leisure travel for airports and stations has played a role: People prefer cabs and autos to public transport. The highest use cases are for outstation as people travel to their native places.

Now let us take a deep dive into the business model of Ola.

Ola is a logistics and transportations facilitator, acting as a middle man between daily commuters and local transportation providers. The business model of Ola is called a gig economy, i.e., an ecosphere of service providers and user demand which is facilitated by one organisation (in this case Ola), for which the organisation takes a commission on every successful mediation. Since its inception, Ola has expanded its scope as a logistics provider to include multiple new verticals from manufacturing to skills provision.

To further understand the different aspects of the business model of Ola, let us start by learning more about its service offerings.

Ola offers different levels of service, ranging from economic to luxury travel. The cabs are reserved through a mobile app and also through their website and the service accepts both cash and cashless payments with Ola money.

Ola is an online transportation network company. It operates as an online cab aggregator that provides a mobile application for booking a cab connecting cab drivers and customers. The company also offers on-demand auto rickshaw service, car-sharing, and bicycle-sharing services.

Ola spun off its electric vehicle business into a separate unit called Ola Electric Mobility with US$56 million of funding capital in February 2019. The funding was provided by Tiger Global and Matrix India. Apart from electric vehicles, Ola Electric also works on charging solutions, EV batteries, and developing viable infrastructure to allow commercial EVs to operate at scale.

Both variants of the Ola Electric scooter feature a similar design that comprises a compact twin-pod headlight with an LED DRL ring, apron-mounted sleek LED indicators, a body-coloured front fender, curvy side panels, a sleek LED taillight, an external charging point at the back, and a split-style pillion grabrail. The Ola Electric scooter features 36-liter under-seat storage that can accommodate two open-face helmets. The color palette for the base model includes five options while the Pro variant is available in 10 choices.

Business Model of Ola in India

India is the domestic market of Ola and its biggest source of revenue as well when compared by regions. Since Ola took off in popularity, they have been on an acquisitions spree to expand its scope of business offerings and fleet of logistics providors.

In a move to expand large cab aggregation, Ola acquired struggling food tech company Foodpanda India with an eye on leveraging the growing food delivery segment business in December. In April 2018, Ola made its second acquisition with Ridlr, a public transport ticketing app. Later in August 2018, Ola financed Series A funding of the scooter rent startup Vogo, and again in December, invested another $100 million.

Business Model of Ola in Australia

Ola had launched its service in Australia in 2018. This was its first overseas market, as it was seeking to fulfil its global ambitions in line with competitors like Uber, Grab, and Didi Chuxing.

It supported its presence in Australia by appointing Simon Smith as its managing director. Smith was playing a pivotal role in building Ola’s presence including strategy, marketing, and product development. His mission included building the future of mobility in Australia and creating an impact for millions of consumers and tens of thousands of driver-partners.

Ola has recently announced its plans to enter New Zealand to provide both drivers and passengers with a fair and safe way to get around Auckland, Christchurch, and Wellington.

To build Ola’s presence locally, Brian Dewil has been appointed as Country Manager for New Zealand. Brian is a proven business leader with over 15 years of experience working in the technology and start-up industry. He previously founded UrbanSherpa, a firm that disrupted the local courier market, and, before his newly appointed role at Ola, he was the Co-Founder and Director of Horizon Robotics, where he implemented robotic technologies to reimagine the way physical goods are transported and delivered.

Ola provides a fair deal for drivers and places the quality of rides for passengers at the heart of its approach. It benefits drivers by charging the industry’s lowest commissions, resulting in higher driver earnings, and by paying drivers daily rather than weekly.

Ola has made cab travel affordable and convenient for everyone in the country, with their deep market penetration in all cities across India and even expanded their reach into many international markets. Above and beyond the travel services, Ola is broadening its facilities. They are now taking part in manufacturing e-scooters and taking green initiatives to reshape the future of logistics.

In this blog, you can see the usefulness of Digital Marketing to set a company and run a business. So, if you want to gain comparable skills and techniques of Digital Marketing, start to learn digital marketing right now.  Check out the IDEs Free Masterclass conducted by CEO of IIDE, Karan Shah to learn more about the future of marketing around the world.

Hope you liked what you read and learnt a lot from this blog, please share it with your friends if you found it insightful. Drop a comment and share your thoughts with us!