With their market position, Red Bull’s marketing efforts have paid off. Marketing improves over time in response to changing societal preferences. Attend our Free MasterClass on Digital Marketing, taught by IIDE’s Founder and CEO, Karan Shah, if you want to stay current with today’s effective marketing.

This blog will fully cover the marketing strategy of Red Bull, STP, marketing campaign, social media marketing, and SEO strategies. So before we delve in let’s start by giving you a brief overview of the company.

Red Bull is a success story that originated in Europe. They established a powerful brand reputation through the use of a vibrant logo with two opposing bulls and a unique tag line, ‘Red Bull gives you wings.’ It has associated itself with extreme sports, new music, and art, all targeted primarily at the younger crowd, through creative marketing and sponsorship.

It was met with criticism from the Food and Drug Administration (FDA), which refused to approve it for sales, yet despite this, it became a success among clubbing and snowboarding people. Even when it was allowed to be sold, this anti-establishment posture garnered support among customers. It rapidly expanded to neighbouring nations and the American market.

The product was marketed at trendy clubs and bars, and the credibility of individuals regarded highly by the younger target group, such as DJs, was used. Red Bull’s self-proclaimed distributors used their local knowledge to help promote the brand and its goods. By 2020, Red Bull sold more than 7.9 billion cans across the world in over 171 countries. To date, the firm has been extremely successful, with a significant year-on-year increase in both sales growth and corporate value.

Red Bull’s adaptation strategy is close to none despite being an international brand it provides affordable energy drinks with keeping the local taste in mind and that is what helped it in becoming the leading brand in terms of sales revenue in the beverages industry.

Red Bull has divided its customer base into different segments based on the following variables – geographics, demographics, and psychographics.

Red Bull employs a targeted marketing strategy that is differentiated. With its single unremarkable flavour sold in a lofty & narrow silver-blue called Red Bull Energy Drink, along with numerous variants of the drink were added over time. Red Bull has covered the whole energy and sports drink market.

If upper-class, high-income individuals desire to have a power booster drink, Red Bull can meet their needs. Even a lower-class, low-income person can also afford a Red Bull drink as it is a cost-effective drink.

Red Bull is positioned as an affordable superior quality, trendy, upscale energy drink all over the world.

Red Bull is a power-pack brand that has followed some of the most daring and widespread marketing campaigns to date.

From using traditional marketing platforms in a minimal way to choosing the pathway to generate awareness and create a brand identity through sporting events, multiple sports team ownership; celebrity endorsements; music; and stunts like the Stratos space diving project.

Red Bull has vanquished the myth of failure from extreme and intense marketing activities.

Red Bull from starting onwards has focused on delivering marketing content that would give people the experience they would be interested in. 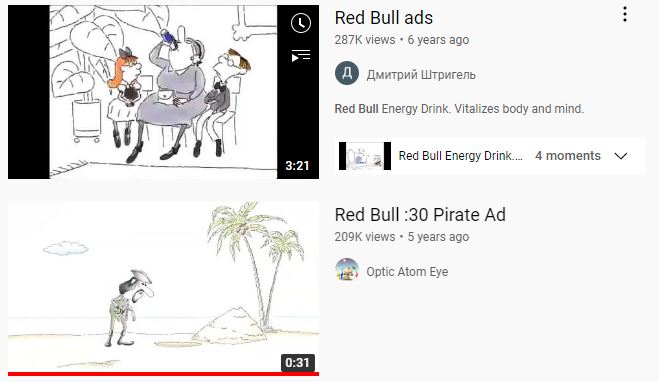 Talking about the advertisement and campaigns that Red Bull runs on Youtube.

Red Bull might have gained a lot of attention of yours through its series of multiple “Red Bull gives you wings” campaigns, which are about 15-30 second commercial ads that include a cartoonist storyline to express how drinking Red Bull in-between performing any task gives you the power and the ability to think smart and complete the task in an agile manner.

The short stories are simply brilliant and define Red Bull as a genius brand. If you haven’t yet checked out the amazing marketing advertisements by Red Bull, then you must check them out now.

We guarantee that you will find yourself more intrigued while watching those, as we have also passed through the same situation and watching advertisements took us 30 more minutes to finish structuring this blog. Lol!

On social media, Red Bull is in fierce competition with other companies in its sector. Red Bull has an overwhelming number of followers, engagement on posts and a great social media presence on Facebook, Twitter, Instagram, LinkedIn, etc in addition to its website.

Red Bull’s most-followed social media account is Facebook with 47 million followers. But they are equally active on all four social media platforms mentioned above. They also have a youtube channel where they have put up all their ads.

All of their posts are either sport, athletes, paid promotion with sports personalities, sponsorship with various sports teams with the brand or announcing events, and recent upcoming happenings. The engagement of the audience on all the social media platforms is great. 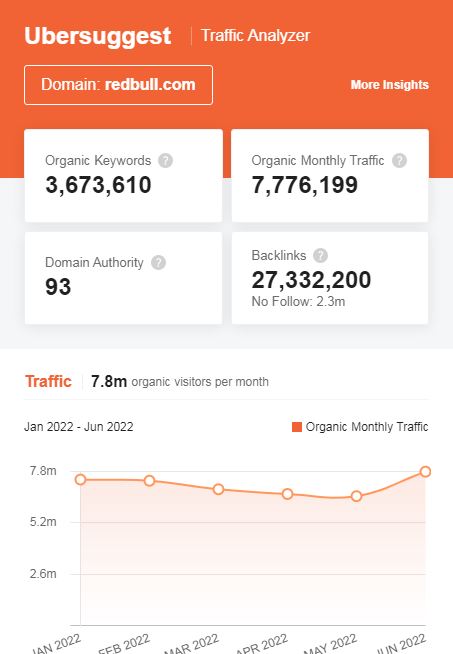 According to SEO rankings, the number of keywords- below 500 is bad, above 1000 is good, and 10000+ is amazing. As we can see, https://www.redbull.com/in-en/ has 3,673,610 organic keywords, and it is considered out of the league. Hence, the digital marketing of Red Bull is gaining an unexpected number of insights.

Further, the organic traffic per month is 7,776,199 which is again very astonishing. As a result, Red Bull is putting full effort into its SEO strategies for better promotion of the brand. While the brand is working hard enough to strengthen its position in Google SERP results.

Here, Red Bull works with various popular influencers in the field of athletics and sport by sharing inspiring content that captivates authentic and loyal consumers.

The brand hosts an outstanding roster of world-renowned athletes from all walks of sport and every corner of the globe. Red Bull has forged connections with several of the most marketable athletes in soccer, basketball, and baseball.

Influencers include Breanna Stewart, Paul Rabil, Beauden Barrett, Dominic Thiem etc. and the list goes on to have worked hand-in-hand with Red Bull.

In India, Red Bull collaborates with cricket players, dancers, and Instagram influencers to publicise the brand.

Red Bull has a well-optimized website with 4 sections i.e. TV, Events, Athletes and Products. On their website, users who are interested in sports, music, dance, and athletics activities can gather content and information about the same.

Red Bull does not sell its drink through its website, as we told that they have a section of products on their website that give descriptions of their products.

One can buy Red Bull products from various third-party e-commerce platforms and online groceries stores like Amazon Fresh, Blinkit, Zepto etc. and more. Also in traditional means, you can find Red Bull at shelf space at both your local convenience store.

In the content marketing strategy, Red Bull on their website covers blogs and articles with topics that interest their target audience, which includes sponsoring and advertising extreme sports, concerts, and music festivals.

They never tried to directly sell their brand, but rather they followed the path of indirectly promoting it through engaging and informative content.

The readers enjoy the content and associate Red Bull with the content that they love to consume. This is also the reason why Red Bull is successful in obtaining relevant traffic on its website.

Another method of content marketing that Red Bull focuses on is publishing videos, reels, pages and other types of content on different social media networking sites and channels.

We know you also want to attract and engage your desired target audience without forcing them to make purchases. Well, for that, you’ll need to muster a basic understanding of how to create a holistic content marketing strategy to ultimately convert them into paying customers without insisting they pay.

To conclude, Red Bull has a huge customer base and is rightly positioned in the minds of its target market, audience and customers. All thanks to the amazing marketing strategies that Red Bull used be it SEO, SMM, content marketing, mobile app, e-commerce etc.

The company has outperformed its competitors, and the main reason for this is the company’s outstanding marketing efforts in highlighting the brand to its customers.

If you like such in-depth analysis of companies just like the marketing strategy of Red Bull check out our IIDE Knowledge portal for more fascinating case studies.