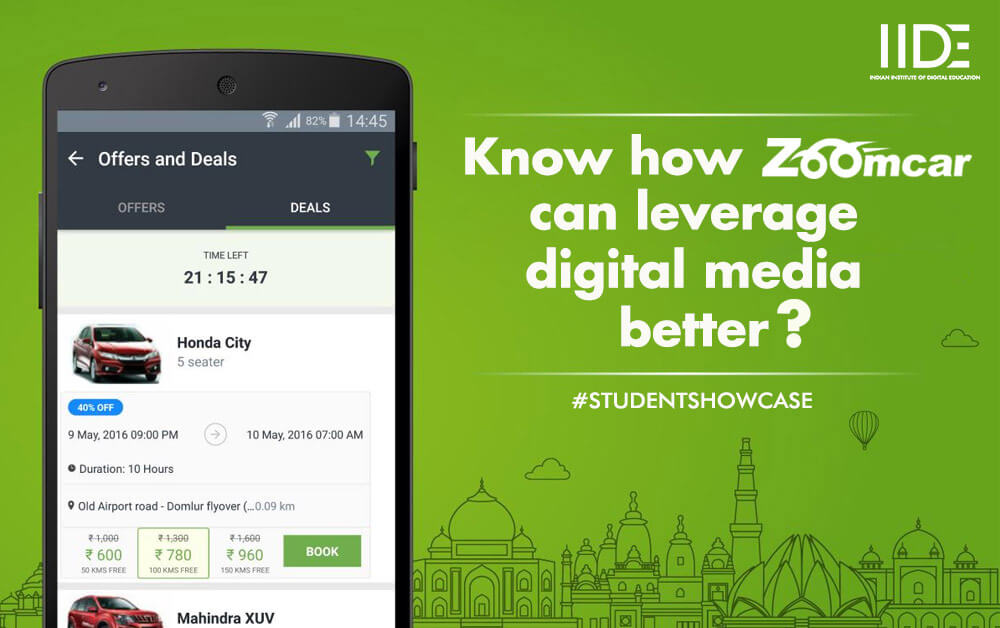 Founded by Greg Moran and David Back, ZoomCar is a self-driven car rental service that has a fleet of over 3000 cars than 26 cities in India. It plans to expand to over 20 countries in the next 2-3 years. It is one of the most revolutionary car rental startups, set to absolutely change the face of car services globally. Watch Viraj Shah and Ujwal Shah presentation on ZoomCar’s Digital Marketing Strategy to learn more about the company!

Founded in 2013, Zoomcar is headquartered in Bengaluru, India and operates in over 27 cities across the country. Both founders, Greg Moran and David Back, are University of Pennsylvania graduates, while also holding postgraduate degrees in business on full scholarships from University of Southern California and Judge Business School (Cambrigde) respectively. While having met in college, both dropped out of business school and moved to India to start their own car rental company. In May 2015, Back quit ZoomCar and moved back to the USA citing personal reasons. Now, the self-drive car rental service is run by Moran alone.

ZoomCar is a successful startup, but faces severe competition in terms of other companies like Drivezy and Carzonrent.

Having previously partnered with Uber, Microsoft and auto-manufacturers like Ford and Mahindra, ZoomCar has definitely reached new heights. It is, in fact, one of the fastest growing start-ups in India!

Viraj Shah and Ujwal Shah, former student’s of IIDE, has devised a new digital marketing strategy for ZoomCar. He believes that this plan could help propel the brand to achieve the goals it has visualised, and maybe even further.

ZoomCar mainly targets the age bracket of those between 18-50.

Their customers are usually middle and lower class students, as well as people who travel a lot for business.

Search engine optimisation refers to the usage of particular keywords in order to ensure the maximum amount of traffic on a brand’s website. These keywords are those that have the highest search rates from their target customers. If a website is able to optimise itself based on the search engine’s keywords, then it is certain that they will be able to reduce their bounce rate as well as reach the right people.

The four most popular keywords for ZoomCar are ‘ZoomCar’, ‘Car’, ‘Bengaluru’, and ‘Drive’. The usage of these words would ensure that there is a higher rate of visitors who find the content relevant, and this leads to higher conversion rates.

When Viraj Shah and Ujwal Shah analysed the ZoomCar website’s SEO strategy, he noticed that a lot of irrelevant keywords were being used. For example, people who search for ‘Mumbai’, ‘airport’, and ‘taxi’ would just end up increasing ZoomCar’s bounce rate and reduce their session duration as the services that the brand offers are not what they require.

This is why Viraj Shah and Ujwal Shah suggests that more relevant keywords should be used. This would be an amazing add-on to ZoomCar’s Digital Marketing Strategy

The reason for ZoomCar’s social media success against other car rental brands could be bigger if ZoomCar posted more visually creative and engaging content. Their posts could often involve creatively edited pictures, like two tyres connected through a curved line in the middle to look like a pair of round glasses, posted on the occasion of Gandhi Jayanti. Alongside this, ZoomCar could keep their social media followers updated on new features to their services by through articles detailing the changes made shared on their Facebook page.

ZoomCar also has their own blog, which they often use to post listicles that encourage their audience to increase their session duration on ZoomCar’s website. Last November, ZoomCar hosted a contest called #Zoomvember, in which they collaborated with the company @beirdo.official. This encouraged followers of the brand they tied up with to explore ZoomCar’s services as well. Other contests ZoomCar keeps having are #GuessThePersonality and #Photography contests.

Both encourage their followers to interact with the brand, and further humanise the brand. Brands that have a personality are always the customer’s preference over faceless corporates.

ZoomCar mainly uses email marketing to update its customers about new contests and social media campaigns. Alongside this, ZoomCar often sends sales promotions to its customers in order to make it easier for them to find out about new offers and discounts the car rental service makes available.

Another way that ZoomCar could engage with its customers that could prove to be really effective is road trip ideas. ZoomCar could send its email subscribers road trip plans that they could go on, like when is the best time to take a road trip, when you should take pit stops etc. These should be written in such a way that the reader’s interest is piqued and s/he will want to keep reading even if s/he will not be going on said road trips. This is an excellent way to boost session durations on the car rental service’s website, as well as to form a good rapport with their subscribers.

Most people who receive automated email from brands get annoyed at the length of the mail or the irrelevance of it to their daily lives. It is an email marketer’s job to ensure that this does not happen. This is one device that ZoomCar could effectively capitalise on, as their subscribers actually might look forward to ZoomCar’s emails. This is because the email would provide the reader with useful, engaging content that is also shareable. This would be an amazing add-on to ZoomCar’s Digital Marketing Strategy

ZoomCar could offer free trips to influencers and then ask them to rate their experience of having used ZoomCar on their social media accounts. Positive reviews would help the brand as influencers are able to reach tens of thousands of people at the tap of a finger. This would be an amazing add-on to ZoomCar’s Digital Marketing Strategy

Since ZoomCar is a car rental service, their blogs should be relevant to their target audience. They could perhaps write a blog post about Non-Negotiable Things to Carry on your Next Road Trip. Since a lot of people who want to rent cars might be people who want to go on road trips, this article would be incredibly relevant to those that visit their website.

Another blog idea could be Long Weekends to look forward to in 2018. As people generally rent cars while going on holidays, adding a blog entry on the website that specifically states when these holidays can potentially take place might even help in boosting the service’s sales, as the customers might be tempted to plan a trip when they look at the available dates.

AdWords is an advertising service offered by Google to all websites listed in the search engine. Often, how you use AdWords seriously affects exactly how your advertisements are received by your audience. There’s quite a few ways to optimise your brand’s AdWords usage, and ZoomCar could do so too! This would be an amazing add-on to ZoomCar’s Digital Marketing Strategy

They could start a pan-India campaign in which their call-outs and call-out extensions can be shorter and more to the point, detailing their prices as well as the services they offer. For example, a suggested call-out could be Self-driven Car Rental service starting at Rs. 70/ per hour.