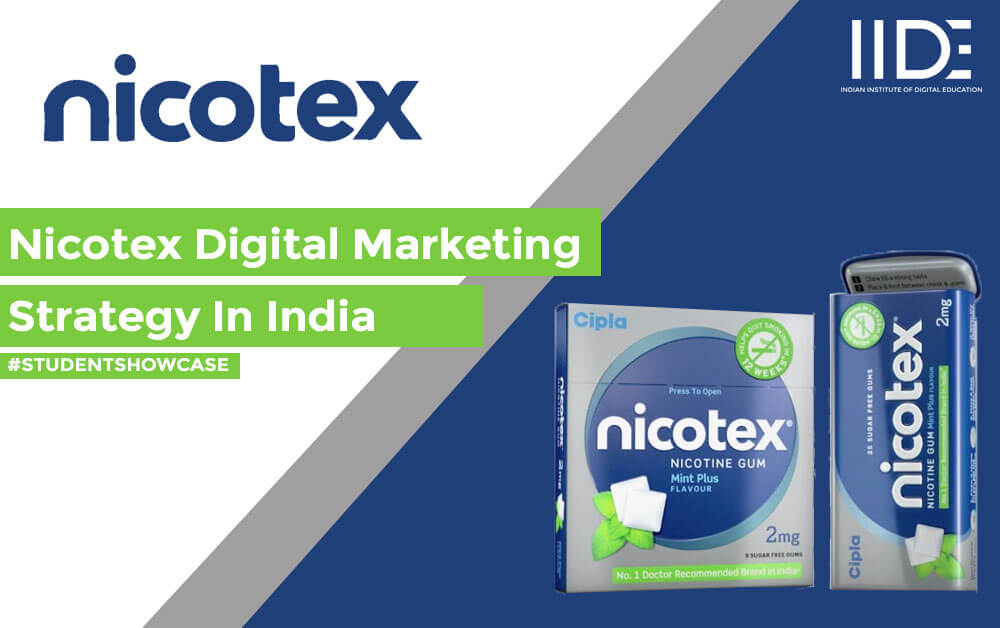 Launched in 2008, Nicotex has strived to improve the lives of consumers by helping them quit smoking in 12 weeks. Nicotex is built on the vision of making India smoking free and today is proud to be India’s No. 1 doctor prescribed brand. Learn more about this brand’s Digital Marketing strategy through Priyanka Mendon and Hetang Desai’s presentation!

What Is Nicotex All About?

Nicotex is a nicotine gum that helps you quit smoking using the principle of Nicotine Replacement Therapy (NRT), A 12-week therapy programme that will help you get back to life without dependence on cigarettes. Nicotex gradually reduces your nicotine intake and makes it possible for you to choose life over smoking.

It is formulated keeping in mind the special taste requirements of the Indian palate. In order to best camouflage the strong taste of nicotine, Nicotex is available in 6 flavors: Mint Plus, Fruity Mint, Paan, Cinnamon, Teeth Whitening and Classic Fresh Mint. They have recently launched an extension of the product called Nicotex Patch.

Nicotex’s target audience is mainly men above the age of 18, who are smokers and are either first-time quitters or are actively trying to quit smoking.

SEO is an integral component of every digital marketing strategy. It helps improve your search engine rankings on the search engine results pages (SERP’s).

It’s very important that it is noted that when the product name is searched as a keyword, i.e. “Nicotex” is searched – the Website appears on the 4th page of Google Search.

Backlinks affect the website’s rank as well. After carrying out analysis, it was noticed that the website has only 44 backlinks, which can be grossly improved.

Nixit just has a presence on Facebook with 4.2 K likes. But 2baconil has 104K likes on Facebook, 1.2K followers on Twitter but only 460 followers on Instagram. So comparatively, Nicotex is doing well on the social media platforms but they can always improve their performance.

Currently, Nicotex has quirky content on their social media, however, they do not post regularly which may reduce their engagement. Their most recent campaign is – #EkCigaretteKum. On World Smoking Day, as part of this campaign, a new anthem titled ‘Hum Me Hain Dum, Roz Ek Cigarette Kam’ was launched. This was the first time a smoking-cessation brand has launched multilingual audio in India.

While seeing today’s cultural interests, the brand decided to build on a musical note to appeal the audience who smoke to quit smoking gradually and effectively by taking small steps and reducing one cigarette at a time. They base many of their social media posts on this campaign currently as well.

They also launched a separate site – icanyoucan.in in 2017. This was in lieu of their reality tv show, in which the partnered with Viu, for streaming online. It was a 6-episode series telecasted on in December 2017, hosted by actor, model, athlete Milind Soman. It showcased the journey of six people, including three who want to quit smoking and three who have already succeeded in quitting. The site has a lead generation form for people who want help in quitting, by calling quitting smoking a “Personal Everest”.

The team proposes a new Campaign revolving New Years Resolutions with the hashtag #Resolutions2019 which would begin from last week of December to 3 months, on Facebook and Twitter. The content will revolve around taking a resolution to quit smoking in 2019, and they plan to target customers that are in high-stress jobs.

An email marketing strategy should be a part of every brand’s overall marketing strategy. Because it helps the brand build relationships with the prospects and its current customers. The e-mails will target 2 different groups of consumers – First Time Quitters and “Relapsers”. According to the groups, the subject and body of the E-mail will have content and will promote #Resolutions2019 with Nicotex.

The team also proposes to allow people who subscribe to #Resolutions2019 to get a free sample of Nicotex. They have also created a Microsite for the campaign and accordingly created appropriate content for the site.