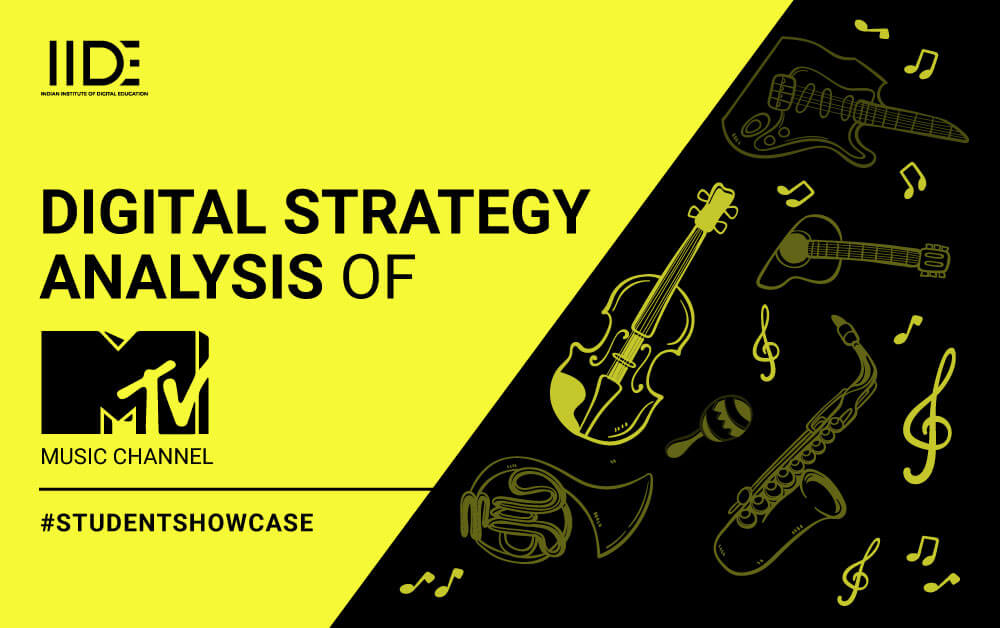 MTV is one of the most iconic names in television all around the world. Owned by Viacom Media, it has established a name for itself not just as a television channel but also as a brand. Though originally having started out as a music video channel, it is certainly not limited to that anymore. Reality shows, talk shows, music analyses, performances, even concerts and arena tours … In the world of entertainment, you name it and MTV has probably done it.

But how did it grow to be so big? And more importantly, how can it grow further?

One of IIDE’s students, Bhoomi Kanakia, set about trying to answer these questions. She devised a brand-new digital marketing strategy for the channel. Read on to find out how a television channel can propel themselves to higher levels of success! Lets check out their MTV Digital Marketing Strategy.

Started in August 1981, MTV was launched as ‘Music Television’ in New York City, USA. Owned by entertainment giant Viacom Media, they kicked off with a bang. Primarily catering to an audience of young adults between the ages of 20-35, they broadcast music videos.

However, with the course of time, MTV gradually moved away from broadcasting just music videos to incorporating reality television, comedy and drama shows as well. This shift happened between the years of 1995-2000.

Now, MTV has begun to cater to an audience of teenagers and people in their early twenties. With this shift in their consumer base, there has been a major shift in their content as well. Most of their recent shows have been aimed at high-school or college going viewers.

There is no doubt that MTV is an iconic brand and an impactful media giant. In the past 36 years, it has certainly set itself as a class apart. However, every brand has the potential to grow more. Our student, Bhoomi Kanakia, takes us through the motions MTV could take in order to one-up its own digital marketing strategy.

One of the key factors towards the success of any business these days, especially those in media and broadcast, is, of course, social media. And in 36 years in the industry, MTV has certainly learned this.

One of the social media campaigns they carry out in order to further increase their following on Facebook is #ThisDayThatYear, wherein the brand posts creatives and pictures of momentous events in the world of media that occurred on that particular date. #Friyay, a campaign to celebrate the spirit of Friday, is also a successful one for the brand. They also often host Facebook Lives, behind the scenes of their shows and insights on upcoming episodes of their most popular programs.

Some campaigns they could potentially carry out in order to cater to their audience a little more on Facebook could perhaps be #MTVPolls, in which their followers react to big reveals regarding their shows, For example, in the case that they get a wildcard contestant on one of their reality shows, they could make an announcement of it on Facebook, and have the likers of their page react to the news.

On Instagram, the brand currently posts #MTVProTips, which are basically little tips to succeed posted in the form of creatives. For example, My way to the top is not through your pants. Another campaign they follow is #MTVMinnswot, which entails a small definition of a trending new term. For example, Trumpshake – When a handshake between two people lasts awkwardly longer than usual. A trumpshake can go up to 20 seconds.

A good suggestion for their Instagram campaign could be to use the #IAmTheOnehashtag. In this campaign, they encourage aspiring models to sign up to compete in India’s Next Top Model, one of MTV India’s most popular shows. This would not only give them exposure to the right kinds of competitors they are looking for in the show, it would also increase the amount of profile visits and followers as new fans would come to know of the campaign and follow the page thanks to it.

MTV’s main competitor are UTV Bindass and The V Channel. UTV Bindass is a national-level brand launched in 2007. It is a household name in terms of media and music and provides tough competition to MTV in India, and when considering the arena globally, The V Channel was launched in 2001, and, since then, has not stopped growing. These mega brands are not just MTV’s in the digital sphere but in terms of viewership as well.

When comparing MTV’s and UTV Bindass’s social media pages, our student found that MTV’s social media pages had a higher engagement rate. This can be proved by the fact that MTV has a larger following on social media than either of the two. MTV Digital Marketing Strategy was found to be very successful.

At the same time, it has been found that there are a few successful social media strategies its competitors are putting into use that MTV could perhaps benefit from, life The V Channel’s #VFacts, where they post lesser-known music facts on their social media pages, like Meghan Trainor wrote her first original song, ‘Give Me A Chance’, at the age of 13. There is also #VeeklyDose, which is a quick catch-up of the latest buzzing music news along with a fun creative, like Lana Del Rey released the title track of her new album ‘Lust For Life’, which features The Weeknd.

UTV Bindass performs a campaign called #WhatWouldYouChoose, which focuses on asking followers to vote on a tough question that resonates with today’s youth, like, Dull job with high salary or dream job with low salary.#ChalUdteHainis a series of inspirational videos they post with people sharing success stories, hoping that it would serve to be useful for people looking to start similar ventures of their own. They also often post relatable videos along with Facebook Lives.

Some of the most popular keywords for MTV aresplitsvilla, Ayesha fazliand mtv unplugged india. This means that whenever someone searches for these terms online, MTV’s results are the first that pop up.

Often, brands bid on certain search terms to ensure that when users search these particular terms on the internet, the particular brand’s page pops up as one of the first results. This may be useful for MTV in reference to other words that it could really capitalise on if they were able to be one of the top results.

Some of the suggested bid words for MTV are Bollywood news, online tv shows, Indian music, reality show, best Indian shows, watch tv online and Bollywood quiz. This ensures that when someone searches for the said terms online, they are bound to encounter MTV’s website as one of the first results. This makes the website more accessible to the people looking for entertainment online, which is ultimately the group of people MTV wants most to reach out to. Developing an SEO Strategy has surely benefited MTV Digital Marketing Strategy!

Can you guess what this song is? and Guess the meaning of these celebrity tattoos are examples of quizzes that the brand could create to ensure that website visitors spend more time with MTV online!

An example of listicles that MTV could post on their blog could be 10 cool things your phone can do with your travel pictures and 5 small music festivals that are so worth it. Listicles are extremely entertaining and captivate the reader’s attention, and at the same time subtly encourage the reader to watch MTV. In this case, the readers might want to watch MTV just for a chance to see all the cool artists they’ve been reading about! This would greatly boost MTV Digital Marketing Strategy!

MTV could conduct influencer campaigns in which it approaches influencers to appear in their shows. For example, Karan Kundra, RJ Malishka, or Mumbiker Nikhil Sharma.

The influencers could be approached on the basis of #MTVSchool and MTV Charcha. This would encourage the influencer’s fans to check out MTV as well!

A few online platforms that could be of use to MTV’s ORM could be Quora, Reddit, Google Play and their own complaint board. These online reputation management platforms help the customers share their reviews of MTV’s shows and therefore spread the word!

Platforms like Quora and Reddit often include questions like ‘Has there been a police case against MTV Roadies?’ and other similar queries. It has to be made sure that MTV answers these questions in the most friendly, peaceable, and diplomatic manner possible! This increases the likelihood that, when someone searches stumbles across such questions, they don’t leave with a bad impression ofMTV.