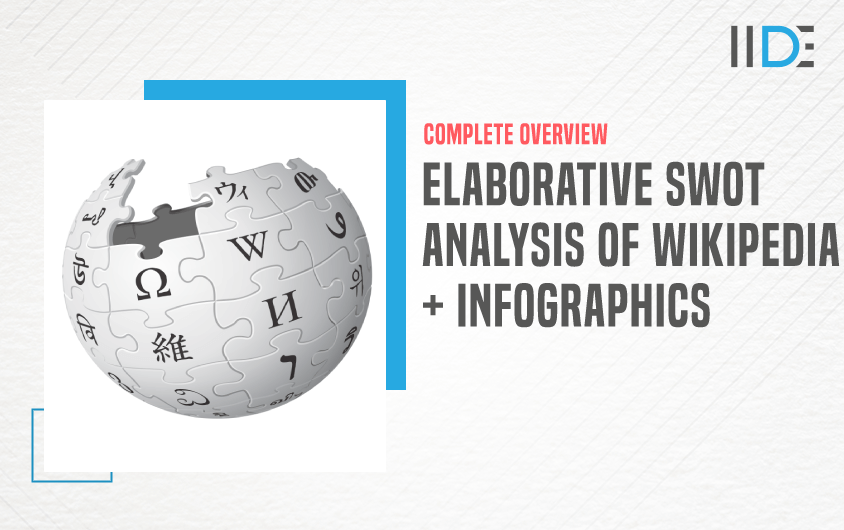 In the present year 2021, Wikipedia is the world’s 3rd most visited site. Wikipedia is ranked 13th among the world’s most popular websites by the Economist publication. The company offers its information for free and does not display advertisements.

Wikipedia is the largest information encyclopedia in the world, with over 6.3 million articles in the English language. Wikipedia marketing for Digital Marketers is a good platform as well as a valuable business, with Wikipedia being the most favoured source of knowledge in the current environment. To know more about ongoing marketing scenarios –  join Free MasterClass on Digital Marketing 101 by Karan Shah who is the CEO and Founder of IIDE.

Let us jump onto the deep description of Wikipedia and learn more about how it managed to survive with all the challenges, opportunities through its strength with the help of SWOT analysis. Before we get started, let’s have a look at Wikipedia itself, its history, services it provides, present position, and competitors. 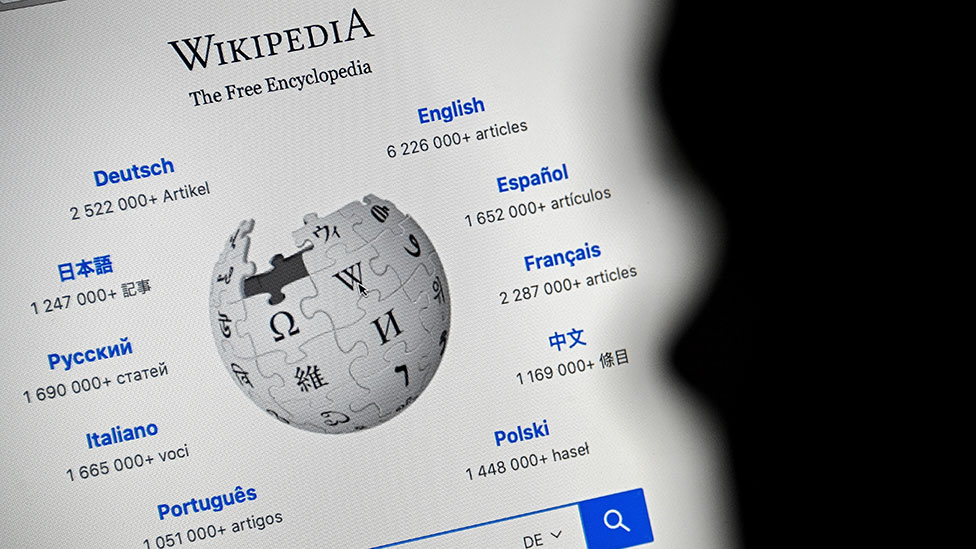 Wikipedia was started in 1994 by Ward Cunningham with the idea of creating a new website model named “Wiki”. It allowed users to edit and create information on the site in real-time. On January 15, 2001, Larry Sanger and Jimmy Wales paved the way for Wikipedia. Wikipedia’s headquarters are in San Francisco, California. Wikipedia is a free encyclopedia available online. It is hosted by the Wikimedia Foundation, a non-profit organization based in the United States.

Since 2003 Wikipedia has grown to include 10 million articles in 260 languages and 2,947,213 in the English language alone. Wikipedia has however drastically affected how we access and share information on the internet.

Unfortunately, Wikipedia had fallen to eleventh place in the world for global internet engagement by February 2020. The coverage of the COVID-19 pandemic issue on Wikipedia, as well as the accompanying modifications, discussions, and even removals, were believed to be a significant resource for future historians looking to learn more about the period.

Moreover, Wikipedia has won the Free Software Award Projects of Social Benefit in 2005 Princess of Asturias Award for International Cooperation in the year 2015.

Academic reference materials, a dictionary, references, novels, manuals, a travelling companion, a media group, and a storage system are just some of the resources available. Wikipedia as a free encyclopedia provides services in 3 types of diversified groups:

Wikipedia is an open-source free online encyclopedia that contains entries on a wide range of topics. Its top main competitors are

Now that we know important facts about Wikipedia, we can look into the SWOT analysis of Wikipedia.

A SWOT analysis examines the strengths, weaknesses, opportunities, and threats that a firm faces. SWOT Analysis is a tried-and-true tool that enables a company like Wikipedia to compare its business and performance to that of its competitors.

It will give us a strategic analysis of its internal and external environment, which is crucial for understanding the SWOT Analysis of Wikipedia.

To better understand the SWOT analysis of Wikipedia, refer to the infographics below: 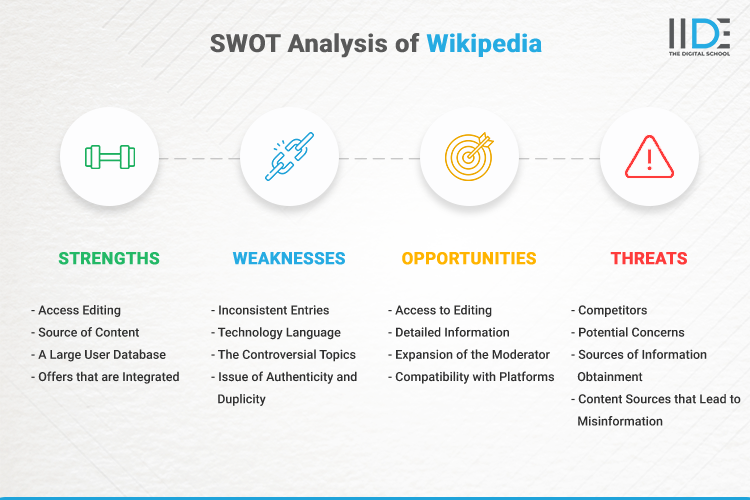 Below is an explicit guide to the SWOT analysis of Wikipedia.

Wikipedia has numerous strengths that help it to thrive in the marketplace. Some of the strengths of Wikipedia are

Weaknesses are aspects of a business or brand that can be worked upon. Here are some of the weaknesses of Wikipedia:

Though it has many weaknesses, on the other hand, Wikipedia has many opportunities.

Threats have the potential to cause harm to a company. Some of the threats of Wikipedia are:

This ends our elaborative SWOT analysis of Wikipedia. Let us conclude our learning below.

Wikipedia, the free encyclopedia, became the most popular source of knowledge very immediately after its launch. As a result, site researchers were spared the task of sifting through Google’s million search results.

Wikipedia has been used as a marketing tool for quite some time now. Established brands have a Wikipedia presence, which has aided in their popularity. A question that arises is how can Wikipedia be used by marketers as a digital marketing tool? Check out IIDE’s 3 Month Advanced Online Digital Marketing Course to learn how to execute Wikipedia marketing strategies that digital marketers must be using.

We hope this blog on the SWOT Analysis of Wikipedia has given you a good insight into the company’s strengths, weaknesses, opportunities and threats.

If you enjoy in-depth company research just like the SWOT analysis of Wikipedia, check out our IIDE Knowledge portal for more fascinating case studies.

Thank you for taking the time to read this, and do share your thoughts on this case study of the SWOT analysis of Wikipedia in the comments section below.