Previously we looked into the Marketing Mix of Walmart, an American based general goods retailer. In this case study, we will analyse the SWOT Analysis of Whole Foods.

Whole Foods Market is one of America’s most successful health food retailers. They have over 500 outlets selling the greatest quality natural and organic items. They have always produced and captured value by informing customers about the ingredients in their goods.

Marketing is a fluid idea that changes in response to current consumer trends and interests. Whole Foods’ successful marketing strategies have allowed them to expand into new areas throughout the world. If you want to learn more about today’s effective marketing, attend our Free MasterClass on Digital Marketing 101, led by Karan Shah, CEO and Founder of IIDE.

Before we delve into the SWOT Analysis of Whole Foods, let’s have a look at the firm, its history, financial situation, products, and competitors.

Whole Foods Market, Inc. is an American multinational supermarket chain, founded on September 20, 1980. It has locations in the United States, Canada, and the United Kingdom.

Whole Foods sells products free from hydrogenated fats and artificial colours, flavours, and preservatives. The business is well-known for its organic options and is a USDA Certified Organic grocer in the United States.

These are Whole Foods major competitors –

Now that understood the workings and history of the company, let’s dive into the SWOT Analysis of Whole Foods. 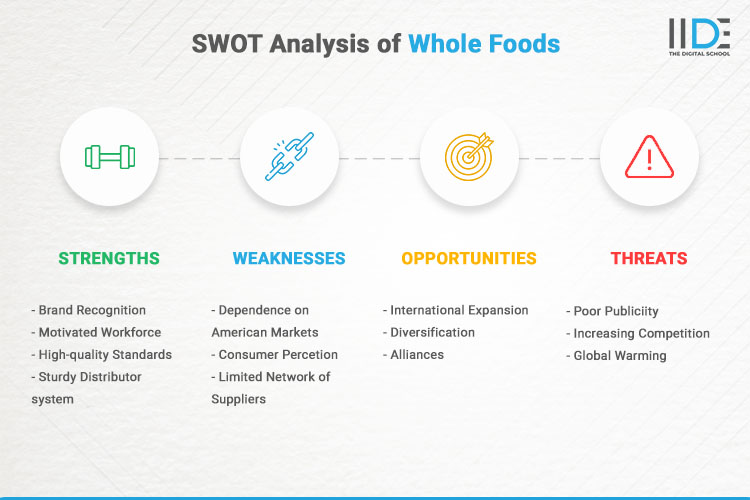 Read the following SWOT Analysis of the Whole Foods Market group to find out what are the various factors that define the success of this firm currently and the factors that would be a change-maker for the company in future.

The following are Whole Foods strengths that have helped them establish a strong position in America as a reliable supermarket:

Here are the weaknesses in the SWOT Analysis of Wholefoods:

The potential for Whole Foods Market is based on existing competition and the worldwide market. The feasible actions for business growth are outlined in this section of the SWOT analysis.

The threats to Whole Foods business are based on the competitive food, technology, and climate. The most significant threats are:

On this note, we reach the end of the SWOT Analysis of Whole Foods. Let’s conclude this case study in the next section below.

Whole Foods has been able to maintain its customers and revenues for many years and will continue to do so. They have done a good job of combating overpricing complaints by launching its new 365 franchises. It needs to expand internationally and invest in overseas markets.

The most crucial area in which the firm should spend is communications. Every firm has its ups and downs, but it is a terrible press relationship and damage control that damages enterprises. The firm only needs to improve its public relations management and will be well.

Having a digital presence has become the most important aspect for businesses all over the world. This necessitates knowledge of digital marketing. Accomplishing Certified Courses may provide you with the possibility to work with prominent businesses like Whole Foods by providing you with a precise understanding of the strategies and functions of Digital Marketing.

IIDE provides training in a variety of digital skills and knowledge, including Short Term Certification Courses that can bring you up to speed in as little as five days. Check out IIDE’s short-term certification courses, which include topics like social media marketing, media planning, and SEO.

Thank you for reading this case study on the SWOT Analysis of Whole Foods. Don’t miss to leave your comments in the section below.