Tencent is a China-based technology company that is mainly focused on serving the Internet’s various services and products. Its various subsidiary companies include Tencent Music Entertainment, Tencent Sports, and Tencent AI.

One of the main drawbacks the company has is its weak marketing strategies. Marketing is an essential factor for the success of any business, to know more about marketing and its different attributes, do check out IIDE Free Digital Marketing Masterclass by Karan Shah the founder and CEO of IIDE.

In this case study, we will have a look at the SWOT analysis of Tencent, before that let’s know more about the company.

Tencent was founded in 1998 and it was incorporated in the Cayman Islands. In 1999, Tencent launched OICQ, and the company’s name was changed to QQ.

In 2018, Tencent became the first Asian tech company to reach the US$500 billion mark, and it became the world’s most valuable publicly-traded company. It has since also been ranked among the top 50 most innovative companies globally.

Tencent is China’s leading Internet company that provides a variety of value-added services to its users. These include mobile platforms, online advertising, and gaming. Tencent’s core business is focused on providing users with a one-stop online lifestyle service. Tencent means galloping fast information. 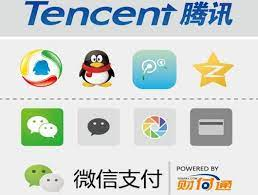 Tencent has a large number of users, WeChat hit 939 million monthly users and the Chinese government has played a huge role in Tencent’s growth. Not only that companies like Google and Facebook banned, but e-commerce was also a big part of the Communist Party’s five-year plan spanning from 2011 to 2015. Combine that with a huge population that embraces tech more readily than many western markets, and you get a company that has become China’s half-trillion-dollar company.

There are multiple products provided by Tencent.

Let us now have a look at the SWOT analysis of Tencent. 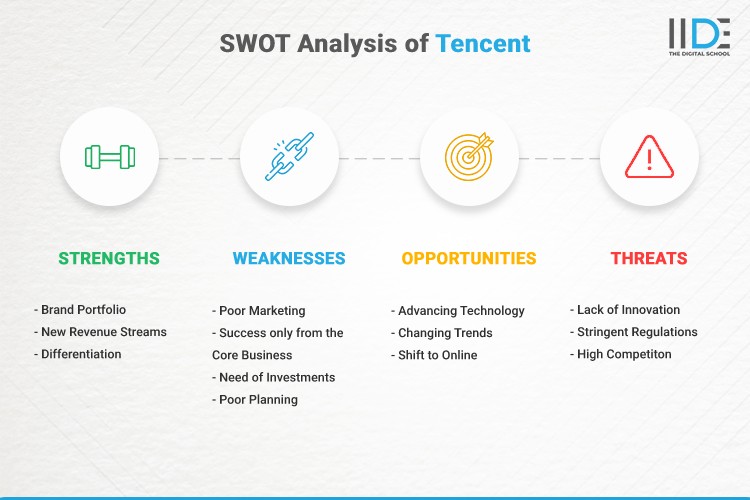 We use SWOT Analysis to identify what you have and what opportunities exist for you in the business. Doing so will allow you to minimize risks and improve your chances of success.

Let us now look at the strength of Tencent.

Tencent has numerous advantages that allow it to thrive in the market. These include its strong competitive advantage and the ability to expand its reach in new markets. The weaknesses of a company are those that can affect its growth and its process of achieving its goals.

Opportunities are external factors that can contribute to the growth and success of the company if identified and grabbed at the right time.

Threats are the factors that cause harm to the company, if not rectified at the correct time.

Tencent has promised that its technology will do good as its mission is to improvise the quality of life through internet value-added services. Its strategic objective is to strengthen its market-leading position and become the hub for fulfilling internet users.

It has a strong brand portfolio, reliable suppliers, a strong dealer community, and excellent performance in new markets.

It is seen that it has limited success outside the core business even after being a leading organization, High grinding rate in the workforce and also financial is done efficiently. These are some of the weaknesses of Tencent that it has to work on.

The company can work on its marketing strategies to further improve its visibility and reach among people. IIDE provides top-class courses in digital marketing which can help you upskill your knowledge.

Liked the blog? Check out the Knowledge Portal of IIDE to read more such case studies on different companies.

Thank you for taking the time to read the case study, do share your views in the comments section below.