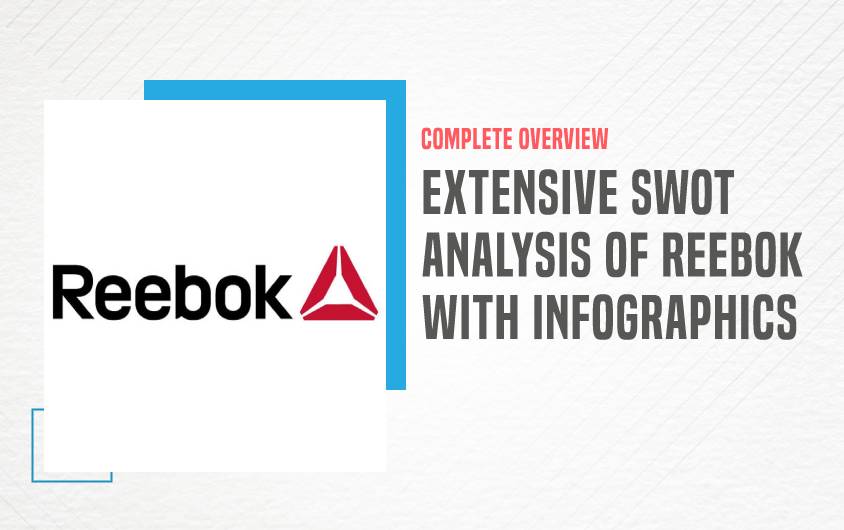 Previously we looked into the Marketing Mix of Adidas, a globally leading sportswear brand and parent of Reebok. This time, we will tackle the SWOT Analysis of Reebok.

Reebok is an American-inspired global brand that is all about fashionable fitness. The majority of the American market was not controlled by Nike or Adidas. They pride themselves on being a company that ushered in a fitness craze that permanently altered the way society views sportswear. Reebok has evolved from a typical sports brand to a fitness-focused brand.

Marketing is a growing concept that evolves with the trends and interests of current consumers. Reebok’s effective marketing methods have helped them reach global markets while positioning itself as one of the leading sportswear brands. Digital media is used in the majority of effective campaigns. Check out our Free MasterClass on Digital Marketing 101, delivered by Karan Shah, CEO and Founder of IIDE, if you want to learn more about today’s effective marketing.

Before we proceed with the SWOT Analysis of Reebok, let’s learn about the company, its founding, financial status, products and competitors.

It all began in England, in 1958, by a sibling duo – Joseph and Jeff Foster, who aimed to carry on their family tradition of making athletic footwear. Reebok was then a subdivision of the family’s already existing footwear company. Today they have grown into one of the largest sportswear brands that not only sell footwear but expanded to CrossFit clothing, equipment and more. 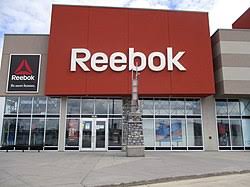 In 1979, Paul B. Fireman, a marketer of camping and fishing gear, spotted the wares of a tiny British sports shoemaker, Reebok International, at a Chicago sporting goods exhibition and decided to buy them. In search of a commercial opportunity, Fireman purchased the company’s North American licence and thus began the reign of Reebok U.S.A.

Reebok was then purchased by Adidas in 2005 in an attempt by the German business to create a double assault on Nike. The conventional thinking of the time led both shoe firms to assume that by joining forces, they might oust the number one sneaker producer and seize the top spot.

In the athletics fashion sector, there are a plethora of options. These are Reebok’s major competitors –

Now that we have tackled the areas that give us insight into the company’s core operations, let’s look into the SWOT Analysis of Reebok. 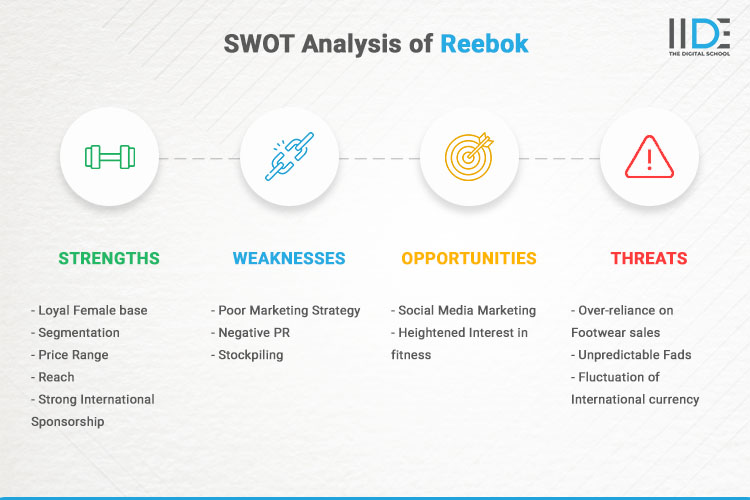 An organization’s internal strengths and weaknesses, as well as external opportunities and dangers, are identified through research that is done through the SWOT Analysis.

Let’s start with the S of SWOT analysis of Reebok i.e. Strength. These are termed as the internal factors that helped Reebok maintain its top position.

The next part of the SWOT analysis of Reebok is its Weakness. Let’s see the Weaknesses of Reebok which give Reebok a disadvantage in some or the other way! 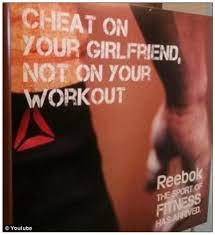 Reebok’s Controversial Ad was then removed.

Now we will analyze the O of SWOT analysis of Reebok. Here, We will understand what all opportunities will give Reebok a competitive advantage. Opportunities are the external factors that give a company a favourable condition to achieve its goal.

Let’s see the Threats which are the external factors that have an unfavourable impact on Reebok! This is the last part of the SWOT analysis of Reebok.

For large global brands like Reebok, a SWOT Analysis is a good approach to break down their operations and analyse management risks and benefits. With this, the SWOT Analysis of Reebok comes to an end.

Reebok has created a loyal base since its inception in the 1950s. They focused on an audience that was not addressed – Women sports, which put them in the spotlight. Reebok has also worked to make its products available for averaged income households, thus expanding their reach.

Reebok has suffered many times due to failed advertising stunts but has come up strong with great innovations in the sports market and stayed at the top. They successfully captured the American market, hence, they should widen their horizons and split their focus on the other global markets.

Reebok uses multiple channels of digital marketing such as SEO, Emailing and Content Marketing to promote and educate its clients about newer products. However, they have the scope to expand and take advantage of the benefits of Digital Marketing because of its cost-effectiveness and connectivity with customers all over the world.

Gaining accurate knowledge on the strategies and functions of Digital Marketing is important, to work with renowned brands like Reebok and Completing Certified Courses may present you with that opportunity.

IIDE offers training in certain Digital Skills and expertise, and Short Term Certification Courses may get you up to speed in just 5 days. Check out IIDE’s short-term certification courses include courses on Social Media Marketing, Media Planning, Search Engine Optimization and more.

Thank you for taking the time to read this case study, and do share your thoughts in the comments section below.