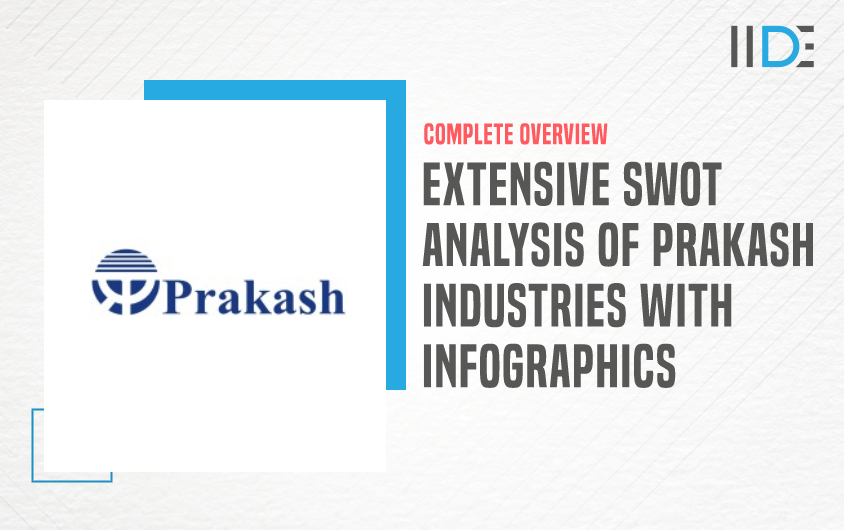 When you visited us last time, we are sure you must have checked out our previous blog about the SWOT Analysis of Tata Steel, one of the most trusted brands in India. Today, we will be taking a brief look at the SWOT Analysis of Prakash Industries – One of India’s well-recognized steel manufacturers.

The main objective is to show you the evolution of Prakash Industries, a company that envisioned making India a self-reliant producer of steel to now being one of the country’s biggest representatives in the field of steel production.

One of the main aspects of Prakash Industries’ huge success was how the company was technologically forward and innovative since its establishment. The future is all about innovation and digital marketing is one such aspect that is taking the business world by storm, each business must know how to market itself on the internet, as it is the next normal. To learn more about digital marketing and add a new feather to your skill hat, we suggest you attend a Free MasterClass on Digital Marketing 101 by the CEO and Founder of IIDE, Karan Shah.

Prakash Industries’s efforts in marketing have helped them a lot. Marketing helps in achieving the desires and preferences of the target audience. Today every other company is using digital marketing, hence it has become a very important and essential skill to learn.

Before starting with the SWOT analysis of Prakash Industries, let us understand more about the company. 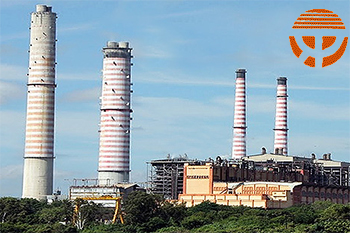 Prakash Industries Ltd. was established in 1980 with a clear focus on the main competencies of mining, steel, and power generation. It is rapidly creating a name for itself in the Indian steel sector and has become one of the country’s leading makers of value-added steel products. Forward and backward integration has always been emphasised by the organisation for maximum value addition. The company has remained closely aligned with economic trends and market needs in the country, resulting in excellence in a varied variety of goods, quick expansion, solid financial foundations, and a promising future.

At the integrated steel mill in Champa, Chhattisgarh, Prakash Industries Ltd (PIL) is one of the most trusted organisations, defining and offering higher levels of customer satisfaction and faster adoption of the latest available technologies. In terms of the highest quality goods, use of environmentally friendly technology, customer, vendor, and contractor satisfaction, and social obligations, the Champa Plant has set several benchmarks. Furthermore, their R&D section participates actively in strict quality control processes to guarantee a consistent supply of high-quality products.

The company takes a fully integrated strategy with products of unrivalled quality. Moreover, the company has always placed a strong emphasis on backward integration to assure a steady supply of high-quality raw materials. Additionally, it has set up facilities to manufacture Wire Rods, HB Wires, and TMT bars, demonstrating the company’s forward integration strategy to provide the most value. Prakash Industries also owns Iron Ore mines to provide the Iron Ore demand for Sponge Iron production.

The firm now runs a captive power generation facility, allowing it to be entirely self-sufficient in terms of electricity for its integrated steel factory and future development plans. PIL has been able to focus on its goal of increasing power generation as well as development ambitions in the steel sector thanks to the installation of boilers based on the use of low-grade fuel and cutting-edge turbines. 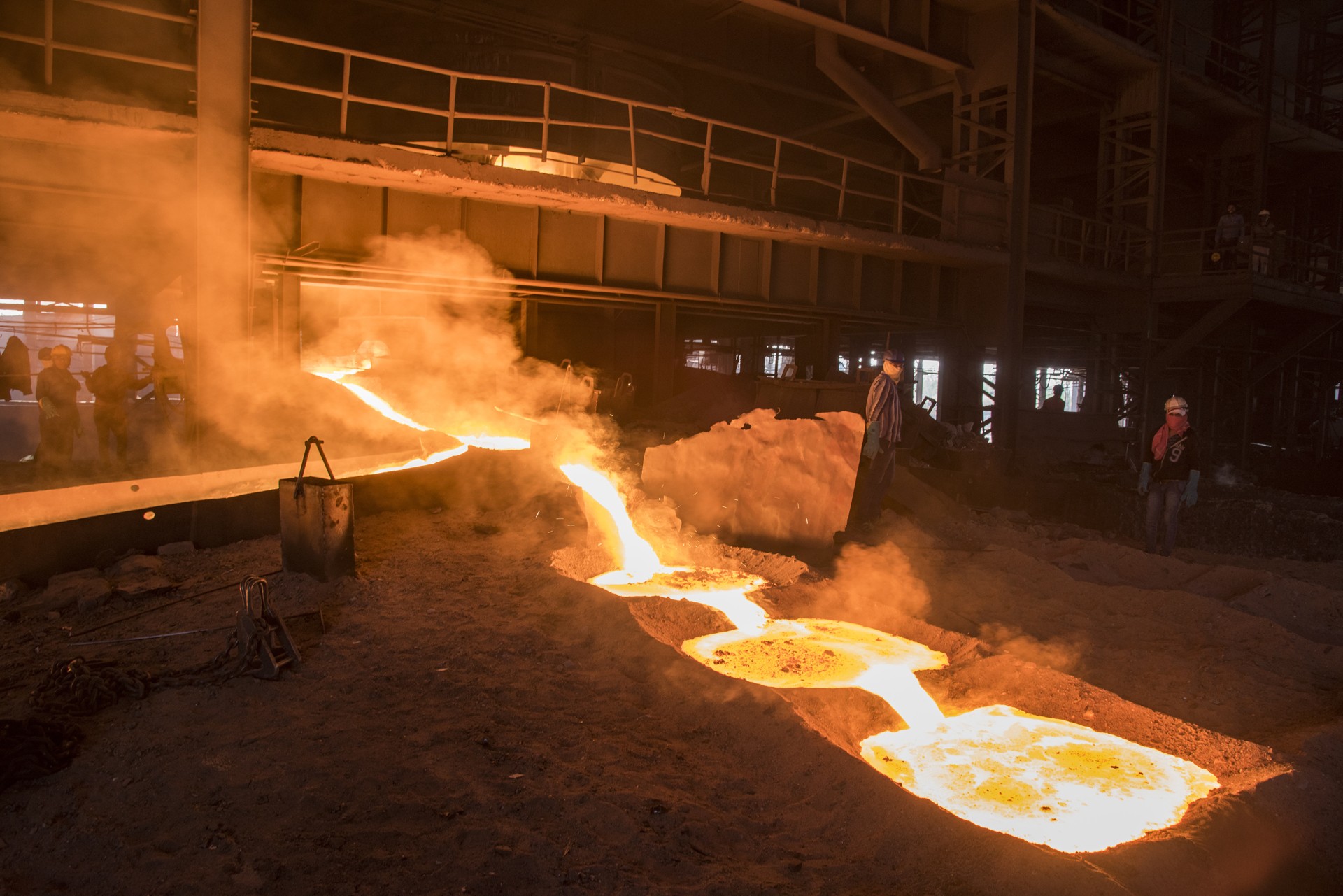 Prakash Industries had been in business for over four decades and primarily deals in:

Prakash Industries compete on a global level with several other manufacturers, of which its top competitors include:

Now that we understand the company’s core business, let’s delve into the SWOT Analysis of Prakash Industries.

The SWOT analysis of Prakash Industries evaluates the strengths, weaknesses, opportunities, and threats that a firm faces. Prakash Industries may evaluate its business and performance against rivals and the industry as a whole using this tried-and-true management model.

It’s a great tool for figuring out where the firm shines, where it falters, devising countermeasures, and figuring out how to expand.

To better understand the SWOT analysis of Prakash Industries, refer to the infographic below: 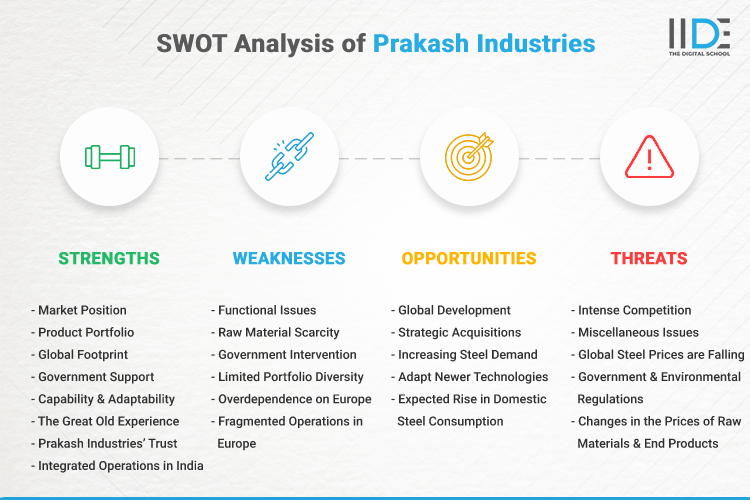 The distinctive qualities that provide a company with an edge in acquiring greater market share, attracting a larger audience, and maximising profitability are essentially its strengths. The following are Prakash Industries’ strengths:

Weaknesses are the areas where the company is lacking behind and needs improvement. Let’s have a look at the weaknesses of Prakash Industries:

Potential areas of attention for a corporation to enhance results, expand sales, and, ultimately, profit help determine the opportunities of a company.

Threats are environmental factors that could potentially be detrimental to a company’s growth. Following are some of the factors that pose a threat to Prakash Industries:

This ends our extensive SWOT analysis of Prakash Industries. Let us conclude our learning below.

One of the biggest takeaways of this article can be how Prakash Industries has always been an inspiration to many businesses for being innovative and technologically forward. The company, being one of the leading steel producers in India has always put a good hand forward to help the country flourish by conducting CSR activities and at the same providing quality products.

The company has ever since gained huge recognition for being one of the companies to embrace digital marketing to make its products well known. With the current trend of customers buying everything online, businesses need to follow the same and retain their customers.

We hope this blog on the SWOT analysis of Prakash Industries has given you a good insight into the company’s strengths, weaknesses, opportunities and threats.

If you enjoy in-depth company research just like the SWOT analysis of Prakash Industries, check out our IIDE Knowledge portal for more fascinating case studies.

Thank you for taking the time to read this, and do share your thoughts on this case study of the SWOT analysis of Prakash Industries in the comments section below.