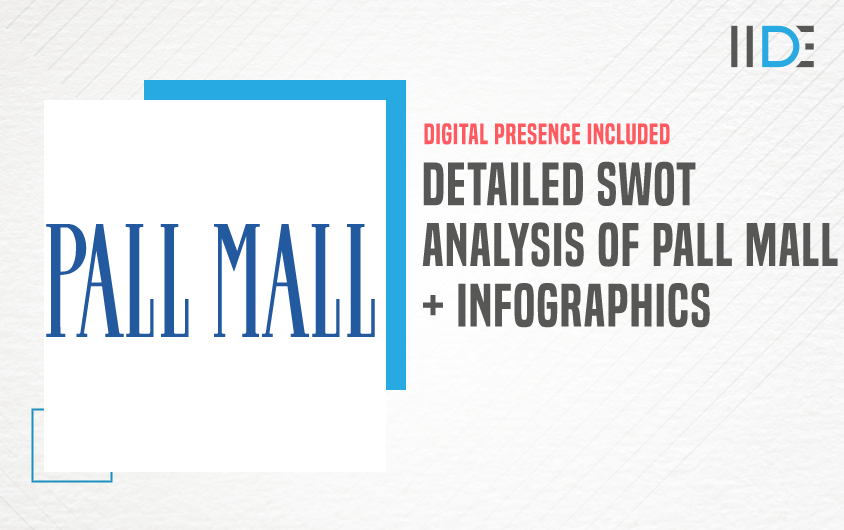 In the United States, Pall Mall is one of the top 10 most popular cigarette brands. They’ve been in business since 1899, so they’ve witnessed more than a century of cigarette selling and believe the future will be equally or more than exciting. Why? Because they’ve always made things that people want and will continue to do so.

Another aspect that gave Pall Mall a leading position today is its marketing campaigns. As the world is swept away by the online stores, marketing has also taken a phenomenal turn and if you are interested in learning about the latest in the digital marketing industry – attend our Free MasterClass on Digital Marketing 101, led by the Founder and CEO of IIDE, Karan Shah.

Therefore, the goal of this article is to provide you with valuable insights surrounding the brand, using the latest facts, updates and even how Pall Mall gained its supremacy in the cigarette industry. So, let’s now dive in to know more about Pall Mall before starting with the SWOT analysis of Pall Mall. 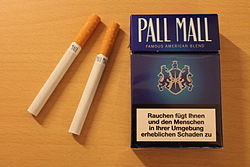 The Pall Mall brand is an American cigarette selling brand that was introduced in 1899 by the Black Butler Company (UK) to cater to the upper class with the first “premium” cigarette. It is denominated after Pall Mall, a well-known street in London. In international markets, it is produced by British American Tobacco at multiple sites.

In 1907, Pall Mall was acquired by American Tobacco with the sale of Butler & Butler. Pall Mall reached the height of its popularity in 1960 when it was the number one brand of cigarette in America. Pall Mall currently is in the “Magnification Brand” segment of the R. J. Reynolds brand portfolio. 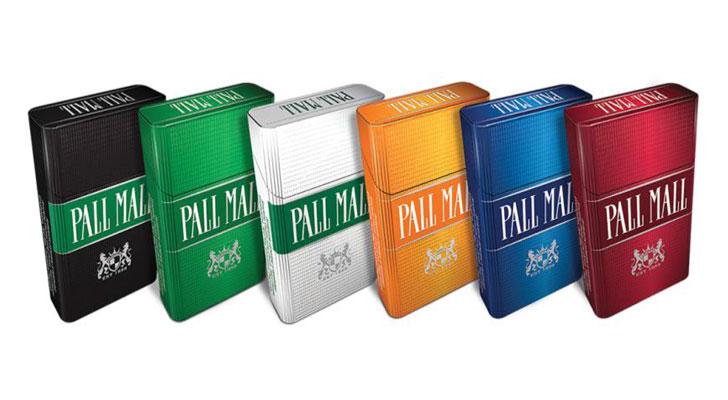 Pall Mall has been in the tobacco business for over a century, specializing in

Pall Mall competes on a global level while maintaining its quality and uniqueness, it competes with global brands such as

Now that we have seen a brief overview of the company, we can now delve right into the SWOT analysis of Pall Mall.

A SWOT Analysis is a strategic planning and management technique that helps an organization determine their strengths, weaknesses, opportunities, and threats related to business competition or project planning. It is a useful planning system that allows Pall Mall to help identify its performance about its competitors and the industry as a whole.

To better understand the SWOT Analysis of Pall Mall, refer to the infographic below: 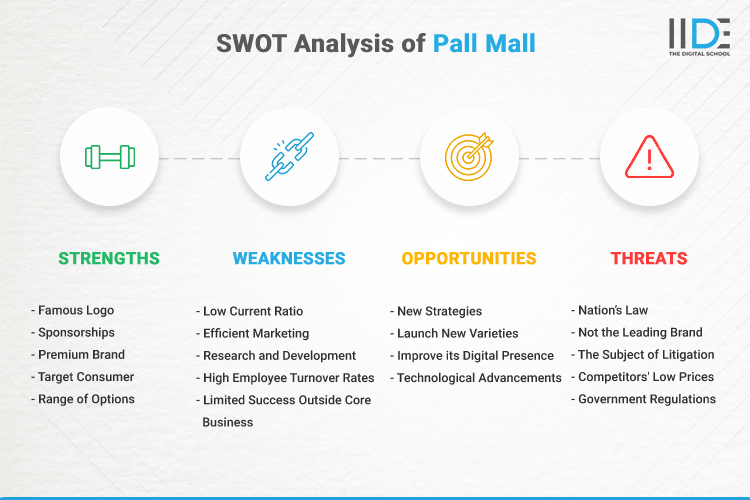 Strengths are determinants that help identify the company’s unique qualities, what features does it excel at and what makes the organization stand out from the rest of the competition.

Weaknesses are pointers that may prevent an organization from functioning at its prime level. There are areas in which Pall Mall has to improve:

Opportunities are prominent external circumstances that may provide Pall Mall with a competitive advantage.

Threats are factors that have the likelihood to disrupt an organization.

This ends our detailed SWOT analysis of Pall Mall. Let us conclude our learnings below.

It is true that Pall Mall is a well-reputed brand worldwide with a large number of fanatics. Following the SWOT analysis of Pall Mall, we analysed that the company’s key driving factor is its marketing strategy in the present and the past but would have to improve on its focus on other market segments rather than depending on the US.

As competition is increasing between all tobacco companies on a global scale, it is the survival of the fittest. The latter means, as the competition is intense, the only way out is by thriving in this ever-changing online world of digital marketing. Being well-versed and efficient is key to succeeding as a global company in today’s era. If you are interested in grasping a skill or investing in upgrading your skills in digital marketing, feel free to check out IIDE’s 3 Month Advanced Online Digital Marketing Course to know more.

We hope this blog on the SWOT analysis of Pall Mall has given you a good insight into the company’s strengths, weaknesses, opportunities and threats.

If you like to read such insightful and extensive analyses of companies just like the SWOT analysis of Pall Mall then you can find more such interesting case studies on our IIDE’s knowledge portal.

Thank you for taking your time out to read this, hope you found the case study on the SWOT analysis of Pall Mall informative and insightful. Share your views on it in the comments section below.