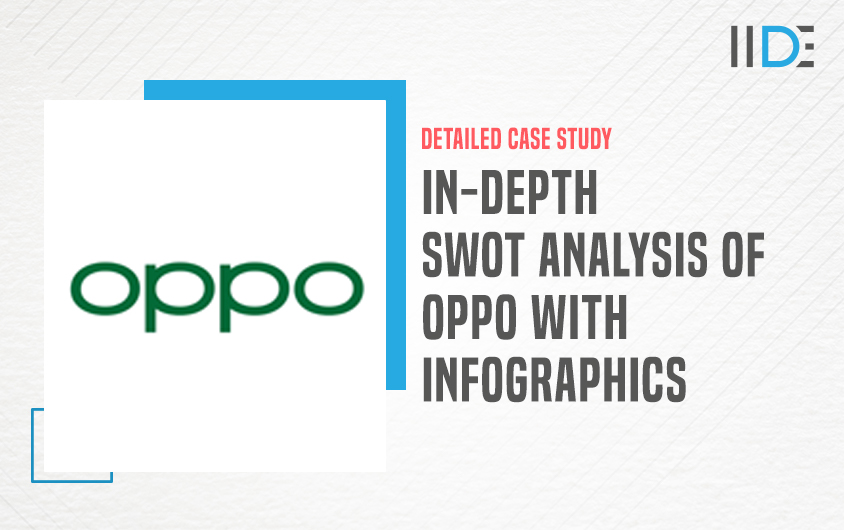 Oppo is the 4th largest brand in the world with a market share of 10.8%. It has been in the market for almost 2 decades now and has been giving some of the finest products to its customers.

Since 2004 it has expanded in 50 countries all over the world and to cater to such a large audience it uses some of the best digital marketing techniques in its field as most of the customers are on digital platforms. So if you are interested in learning the latest skills in digital marketing – check out our Free MasterClass on Digital Marketing 101 by the CEO and Founder of IIDE, Karan Shah.

Thus this makes us keen to know how Oppo found success in its field,  we have given a detailed study on the topic SWOT Analysis of Oppo. But before we dive into SWOT analysis let us get a brief idea about Oppo as a company, its products, competitors, financials, and more.

The brand Oppo was first registered in 2001 in China and launched in 2004. It was founded by Tony Chen and is headquartered in Dongguan, Guangdong, China. Since then, they have expanded worldwide to 50 countries with a user base of over 300 million.

Oppo started its international journey in 2009 in Thailand. According to IDC (2017), the brand’s market share was second within the Thai smartphone market.

In June 2016, Oppo became the prime smartphone producer in China, selling its phones in around 200,000 shops. In 2019 Oppo was the best smartphone brand in China and was ranked No. 5, in market share, worldwide.

Oppo has such an extended reach in the market it also provides different products in the market. Following are the products provided by Oppo:

Now that we know about the company let us learn about the SWOT Analysis of Oppo. 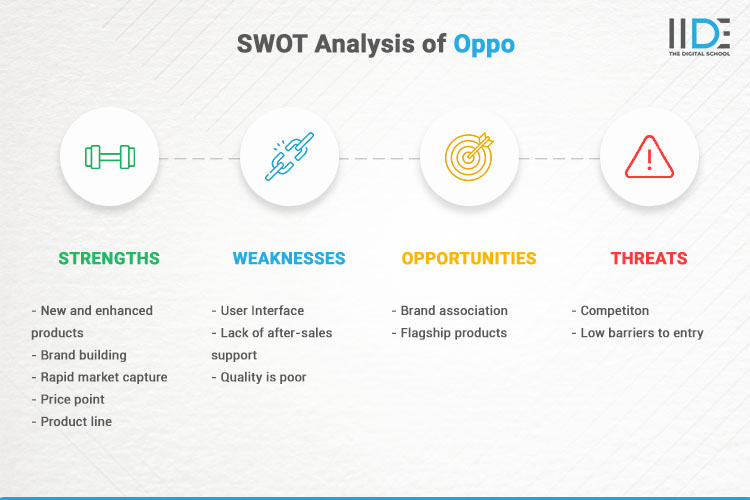 Read the subsequent SWOT Analysis of Oppo to seek out what are the varied factors that outline the success of the firm and the factors that might be a change-maker for the company in the future.

Strengths help the business in understanding where it beats the competition and has a competitive advantage within the market. Strengths are generally the internal features of the business.

Weaknesses are the pain area of the organization where it doesn’t have the resources or skills. The business has got to work upon these areas so that they’re not left behind from the competition. Following are some of its weaknesses:

Opportunities help in understanding what other things a business can do with the present skills and resources. It helps the business to understand the areas where it can expand and take a lead to diversify the business and expand the customer base.

Threats analysis helps in understanding what are the areas which may impact the business in the future. So business has to gear themselves up to handle the threats within the market landscape. Following are some of the threats for Oppo:

With this, we have completed the SWOT Analysis of Oppo. these studies help the company in decision-making and planning a strategy.

We can conclude that Oppo is one of the largest brands in the world by market share. It has maintained a good brand value among its target audience with the help of pricing and product line. It can capture larger markets by developing flagship devices in the market. Still, there are some drawbacks for Oppo that hold it back.

Their user interface isn’t appealing to new users of the brand and the low barriers to entry into the market create a negative impact on the company. It can implement better digital marketing strategies to create more brand awareness and increase its brand value so that even in tough competition it can stay firm as most people use social media nowadays. If you are interested in learning more and upskilling, check out IIDE’s 3 Month Advanced Online Digital Marketing Course to know more.

If you would like to know such detailed analysis of companies, find more such insightful case studies on our IIDE Knowledge portal.

Thank you for taking the time to read this blog, and do share your thoughts on this case study in the comments section below.