Nissan Motors is a Japanese industrial firm that produces vehicles, trucks, and buses by the names Nissan and Datsun. Nissan has been committed to developing cutting-edge technology and products since its founding.

Nissan has marketed their brand to great lengths, but still have scope to tap into the digital marketing sphere. Marketing develops over time to cater to the current population’s reach and preferences. Check out our Free MasterClass on Digital Marketing 101, delivered by Karan Shah, CEO and Founder of IIDE, if you want to learn more about today’s successful digital marketing.

In this case study, we shall learn about the SWOT Analysis of Nissan Company that will give us an insight into its success. Let’s take a look at Nissan’s history, products, finance, and opponents before we get started.

Nissan Motor Company Limited is a multinational automobile manufacturing company based in Japan, launched in 1934. When founder Yoshisuke Aikawa became president of Nihon Sangyo in 1928, the name Nissan was born. Nihon Sangyo, which primarily deals with foundries and car parts, was first listed on the Tokyo Stock Exchange in 1933 under the ticker NISSAN. From there, Nissan moved beyond its Japanese roots, and in 1958, it was renamed Datsun in the United States. 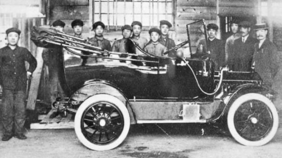 Nissan was in trouble by the late 1990s. It has been in cooperation with the Renault–Nissan–Mitsubishi Alliance since 1999. Nissan’s sales soared in the early twenty-first century as a result of the cooperation, fueled in part by sales of the company’s popular electric vehicles.

Following are the products sold and manufactured by Nissan –

There are various brands in the motor industry. Following are top rivals of Nissan –

Now that have understood the workings of Nissan, let’s delve into its SWOT. 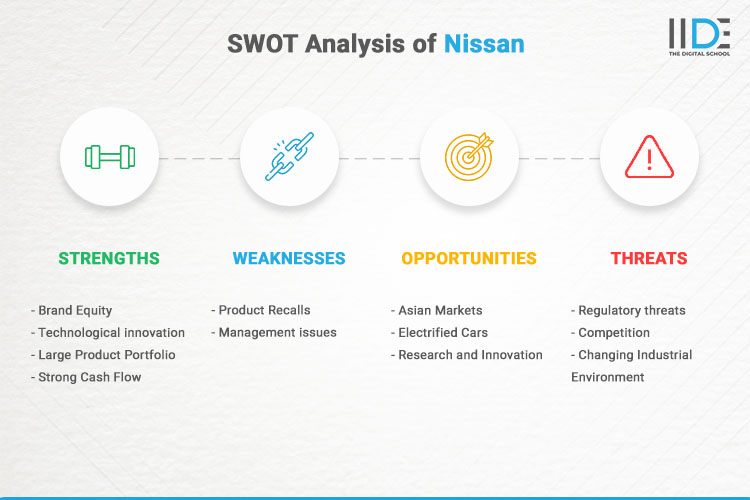 Strength provides the organization with a resource and a competitive advantage over other organizations. These factors are internal beneficiaries of the company. Nissan Company’s Strengths are listed below –

Customers’ reactions, as well as management difficulties, reveal an organization’s shortcomings. The weakness is frequently a limitation of the organization’s resources in comparison to its competitors, which causes the organization or corporation to perform poorly. The following are some of Nissan’s flaws –

Opportunities are everything that a company can utilise for its own needs to become unique and productive in comparison to its rivals. Opportunities can be found in a variety of sectors, including changes in technology, government policy, social patterns, and so on.

Threats are unfavourable situations to a company’s environment. New or revised competitors, steady market expansion, faster bargaining power of major customers or suppliers, technical changes are some of the most common challenges to an enterprise’s or company’s success.

SWOT Analysis is a tried-and-true management tool that allows a company like Nissan Company to compare its business and performance against that of its competitors. Nissan Motors is one of the most well-known vehicle brands.

Nissan is a well-known Japanese automobile company. Despite decreased car sales and a smaller market share, the company maintained a good cash flow and revenue. The company’s electric car sales have soared. It was able to maintain its market share and sales in China by producing new electrical models. Its partnership with Mitsubishi and Renault has also proven fruitful. The alliance has a presence in more than 200 countries and has sold over 10 million vehicles.

When Nissan boosts their presence through various channels such as SEO, emailing, content marketing, and social media marketing, it will not only benefit from the cost-effectiveness of digital marketing, but it will also reach a wider audience than usual.

If you’re interested in additional in-depth company research, visit our IIDE Knowledge portal. Thank you for reading this case study on the SWOT Analysis of Nissan Company. Don’t forget to leave your feedback in the comments below.