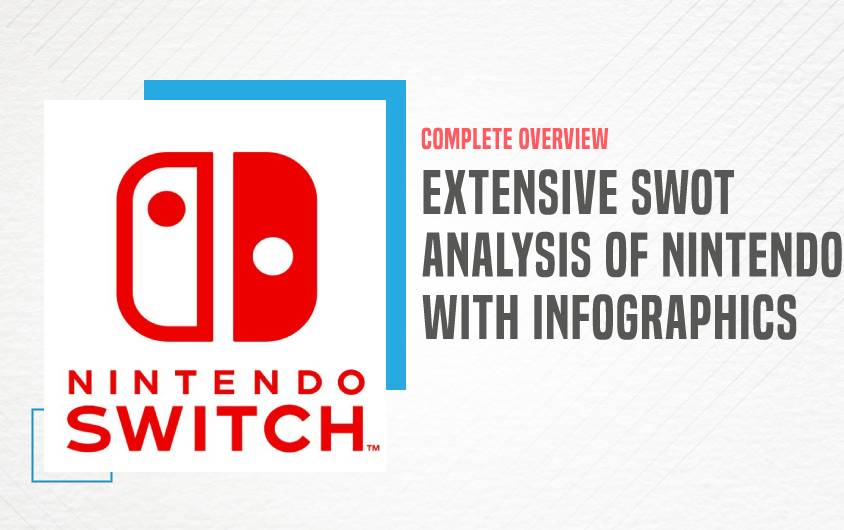 Nintendo is the leading video game creator and hardware manufacturer. Their TV and mobile-connected consoles, as well as their games, have raised the standard for engaging families with fascinating and difficult games.

Nintendo has extensively profited from their marketing efforts. Marketing is an evolutionary concept. Majority of successful campaigns now take place on digital media. Attend our Free MasterClass on Digital Marketing 101, hosted by Karan Shah, CEO and Founder of IIDE, to discover more about today’s effective marketing.

To better understand the route behind Nintendo’s continued expansion, let’s start with the company, its founding, financial status, products, and competitors using the SWOT analysis of Nintendo.

Nintendo was founded in Kyoto, Japan, roughly 130 years ago as a toymaker, and they were noted for their pioneering attitude. Originally known as Nintendo Karuta, the firm was started by artisan Fusajiro Yamauchi who created handcrafted hanafuda playing cards. Nintendo released its first video game system, the Color TV-Game, in 1977, after branching into several fields of the industry during the 1960s and obtaining legal standing as a public corporation under the present corporate name.

Nintendo contributed to the growth of the computer gaming industry and continue to build a name for themselves with startling and inventive goods. Nintendo’s Game Boy, Wii, Nintendo DS, Nintendo 3DS, and Nintendo Switch consoles are among the most popular in the business.

Nintendo has a branch in Europe that was founded in 1990 and operates offices in the United Kingdom, France, Sweden, and Germany, among other places.

These are the products produced and sold by Nintendo:

Following are the few major competitors of Nintendo: 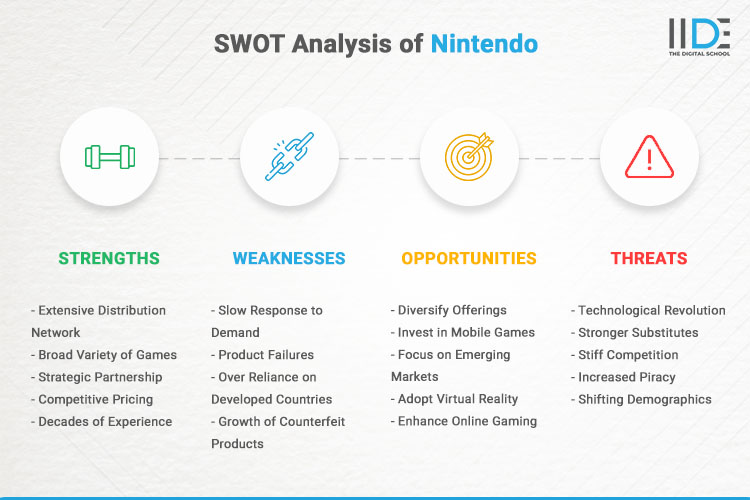 Let’s start with the S of the SWOT Analysis of Nintendo – Strengths. These are the internal factors that have contributed to Nintendo’s constant growth and reputable status.

The Weaknesses of Nintendo’s SWOT are what puts the company at a disadvantage in some aspects. They are also internal factors that the company can control and work on. 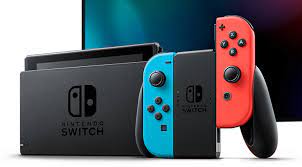 Now we’ll dive into the O of the SWOT analysis of Nintendo. Here, we will grasp the possible options that would place Nintendo at a competitive advantage. Opportunities are external circumstances that pose the company with a  favourable environment.

Last under the SWOT Analysis of Nintendo are the Threats. These are external elements that disrupt the strategies and workings of the company, putting it at a disadvantage.

With this, we conclude the SWOT Analysis of Nintendo. This detailed study helps companies and their customers know where they stand in the market. In the following section, let’s briefly conclude the takeaways of this analysis.

Nintendo has gained immense popularity and is one of the most important companies in the world. Despite facing a lot of competition they have become the market leader and have stood the test of time. Nintendo’s success can be reiterated by its market segmentation and innovation. Its broad variety of games, smart pricings and strategic partnerships place them on the top. However, Nintendo should focus on improving its market reach by tapping into the mobile gaming market.

Additionally, when Nintendo ups their digital marketing strategies, they will gain not only from its cost-effectiveness, but will also reach a larger audience than normal via various channels such as SEO, emailing, content marketing, and social media marketing.

Mastering the specifications of digital marketing will pose opportunities to work with major corporations like Nintendo. IIDE’s short-term certification courses covering the broad spectrum of digital skills can get you up to speed in less than a week. These courses will teach you about social media marketing, media strategy, search engine optimization and more.

Check out our IIDE Knowledge portal for detailed corporate analysis. Thank you for taking the time to read this SWOT Analysis of Nintendo. Don’t forget to leave your thoughts regarding this study in the comments section below.