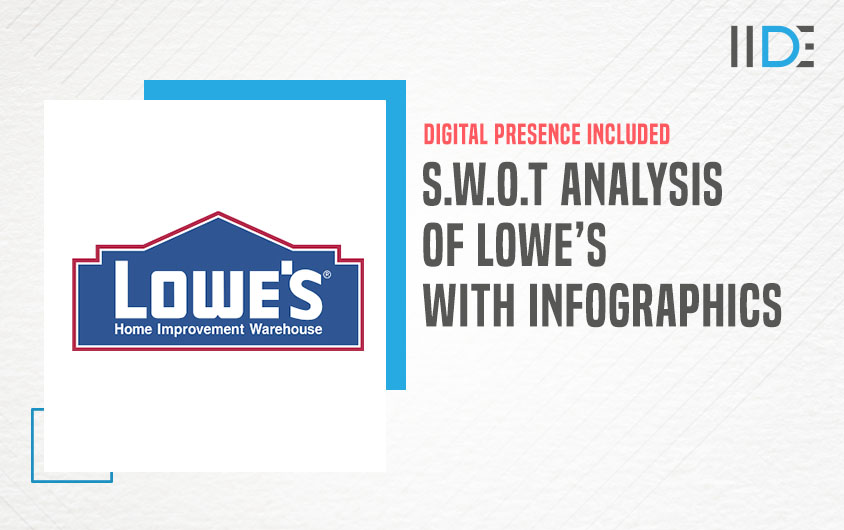 Lowe’s has developed from a little North Carolina hardware store to one of the world’s leading home improvement businesses. They are one of the most well-known names in the US and Canadian home improvement retail business. They have a long history of placing their clients at the centre of their operations.

Lowe’s strategic marketing efforts have aided the company’s growth.   As the world goes online, marketing advances, and if you want to stay current, enrol in our Free MasterClass on Digital Marketing 101, presented by Karan Shah, the CEO and Founder of IIDE.

Let’s get a quick overview of Lowe’s, its finance, products and competitors before jumping into the SWOT Analysis of Lowes.

Lowe’s is an American home improvement retailer that was founded in 1921 by Lucius Smith Lowe. It is the world’s second-largest hardware chain. In North America, Lowe’s and its subsidiaries operate 2,197 home improvement and hardware stores.

Lowe’s sold mostly to contractors in its early years, and its locations were designed to seem like modest neighbourhood hardware stores. When Robert Strickland took over as chairman of the firm in 1978, he devised a marketing strategy aimed towards do-it-yourselfers.

Appliances, home décor, and garden items were added to the company’s product line, which had previously only included enormous tool and building supply inventories. From 2003 through 2010, Lowe’s received eight consecutive Energy Star honours, including four Energy Star Partner of the Year accolades for educating customers about the benefits of energy conservation.

Now that we have understood the company’s business and functions, let’s look into the SWOT Analysis of Lowe’s. As one of the industry’s leading corporations, Lowes has a significant advantage that helps it prosper in the marketplace. The following are Lowe’s strengths:

The following are Lowe’s weaknesses that must be resolved for them to maintain their position in the industry.

Some of the opportunities for Lowe’s are mentioned below:

Although Lowe’s is the industry’s topmost brand, numerous possible challenges might put the company at a disadvantage. The following are the threats mentioned in Lowe’s Companies’ SWOT Analysis:

Lowe’s is America’s second-largest and well-known home improvement retailer, after only Home Depot. Lowe’s is a financially sound firm that has maintained a consistent profit over the years. They fall back when it comes to international market reach and their rather weak customer service. While working on improving these major factors, they should also make effective financial decisions to avoid falling into losses.

Additionally, Lowe’s should focus on having a stronger existing online presence as it will help them keep their current market up to date and reach many. They effectively make use of digital marketing strategies like SEO, SMM, content marketing, media strategies and more to further expand their business.

You can find yourself working in marketing for a successful organisation like Lowe’s, however, it requires gaining a grasp of the Digital Marketing industry. IIDE’s provides short-term certification courses in a variety of digital skills and knowledge that can get you up to speed in as little as five days.

Thank you for taking the time to read this case study on the SWOT Analysis of Lowes. Check out our IIDE Knowledge portal for more intriguing case studies. Don’t forget to leave your feedback in the comment section below.