General Electric is an American multinational conglomerate that contributed to the aviation, energy and healthcare industries. GE aids enterprises in establishing an efficient, dependable, and safe work environment by merging its technical expertise with software and analytics.

Successful marketing methods let General Electric target specific locations and reach a wide client base. Digital marketing is one of the most powerful and successful kinds of marketing nowadays. Discover more about today’s effective marketing by attending our Free MasterClass on Digital Marketing 101, delivered by Karan Shah, CEO and Founder of IIDE.

Before we go into the SWOT Analysis of General Electric, let’s have a look at the firm, its history, financial situation, products, and rivals.

General Electric (GE) is a prominent American firm that is one of the world’s largest and most diverse. In 1892, the corporation was formed by combining the assets of the Edison General Electric Company and two other electrical firms.

It creates one of the world’s largest lines of electrical consumer products and became a leading seller of different sorts of home appliances through its General Electric and Hotpoint appliance brands. 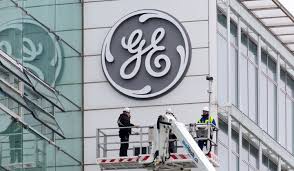 The corporation declared its intention to split into three public entities on November 9, 2021. Each new entity will focus respectively on energy (renewable energy, electricity, and digital), aviation and healthcare.

Among the plethora of businesses in this sector, the following are the top 5 competitors of General Electric – 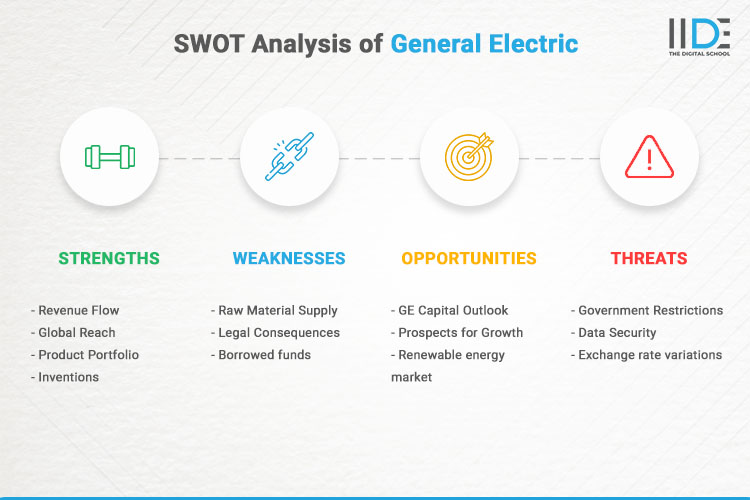 Strengths are the aspects of a company’s operations where it excels, providing it a competitive edge. General Electric has the following advantages –

Weaknesses are elements of a business or brand that may be strengthened. The following are some of General Electric’s flaws –

Threats are environmental factors that have the potential to limit a company’s growth. General Electric’s threats are as follows –

With this we come to the end of the SWOT Analysis of General Electric. In the below section, let’s conclude the case study.

General Electric has been a long yet strong standing organisation with the help of their stagnant revenue flow, diverse product portfolio and consistent inventions. Some of the factors they can control are borrowing huge amounts of funds and protecting their brand image but fewer to no lawsuits. Despite already being a global multinational, to keep their status they have to expand their offering and work on advancing technological abilities.

General Electric will benefit from the budget-friendliness of digital marketing and its ability to reach a broad audience via channels like SEO, emailing, content marketing, and social media marketing.

Mastering the principles of digital marketing and completing Certified Courses may lead to possibilities to work for large retailers such as General Electric. IIDE’s short-term certification courses may get you up to speed in as little as five days on a variety of digital skills and expertise.

Check out our IIDE Knowledge portal for more such company analyses. Thank you for taking the time to read this case study on the SWOT Analysis of General Electric, and please leave your thoughts on the case study in the comments section below.