Last time, we evaluated the SWOT analysis of Amazon. This time, we will examine the SWOT Analysis of Etsy in more detail.

Etsy is a leading online marketplace of unique and creative goods, founded in 2005 in New York. They have seen more than a century of technological progress, and they think the future looks just as exciting. Why? Because their products have always satisfied a need in people’s lives, they will never stop making them.

Etsy has also competed successfully in its marketing efforts in the past few years. With the growing popularity of online shopping, marketing is undergoing constant changes. If you would like to learn more about the most up-to-date marketing techniques, consider joining our Free Masterclass on Digital Marketing Basics by the CEO and Founder of IIDE, Karan Shah.

In this blog, we’ll learn about the detailed SWOT Analysis of Etsy and decode its success but before that let’s know more about the company.

Founded in 2005, Etsy is an American internet marketplace that specializes in handcrafted or vintage items as well as craft supplies. A variety of products can be found here, including jewelry, bags, clothing, home décor and furniture, toys, art, and craft supplies. It is modeled after the traditional open craft fairs where sellers have their storefronts where they list their wares for a fee. 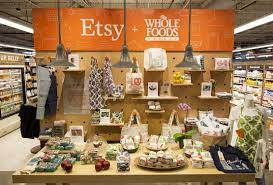 In 2005, Robert Kalin, Chris Maguire and Haim Schoppik founded Etsy. They developed the first version of the website in less than two months and launched it that same year.

In Kalin’s view, he was seeking a unique brand that was built from the ground up. Etsy is translated as “what if” in French and Latin.” Kalin said he chose the name because he “wanted a nonsense word.” By doing this, potential customers would not have formed associations with the name, which would strengthen the brand.

Etsy has been in this industry for more than a century and it has about 100 million items for sale for consumers to choose from. Some of them are :

The top 5 competitors of Etsy are:

Now that we understand the company’s core business, let’s delve into the SWOT Analysis of Etsy. SWOT analysis is a strategic planning framework that a firm can use to get a detailed analysis of the company’s situation. Using a SWOT framework can help Etsy realize its strengths, weaknesses, opportunities, and threats associated with its strategies.

Only through regular SWOT analysis and improving itself, Etsy Inc. maintains its dominance in its business sector. An Etsy SWOT analysis will prove to be very useful for other companies too.

Etsy Inc. has many strengths that will make it a leading player in its market.

An organization’s internal factors include its weaknesses. Several of these weaknesses can be identified through SWOT analysis.

The opportunities in a business are external factors that can be tapped for profit and benefits.

As part of a swot analysis, threats are most important. An Etsy Inc. SWOT analysis will reveal the threats that have been holding the community back.

Etsy can be said to be strong due to steady growth in profits and global reach. As for its greatest weakness, that would be a stiff structure of an organization. Although it doesn’t look like much, it is a huge burden to carry.

The E-commerce market is becoming increasingly competitive, which leaves companies to compete for customers by improving marketing efforts. With an evolving landscape where digital marketing is of utmost importance, being well versed in the realm is a requirement for every marketing enthusiast. If you also want to learn digital marketing, do check out top-notch courses provided by IIDE.

If you are interested in such detailed analyses of companies, try our IIDE Knowledge portal for more. Thank you for reading the blog, share your thoughts in the comments.